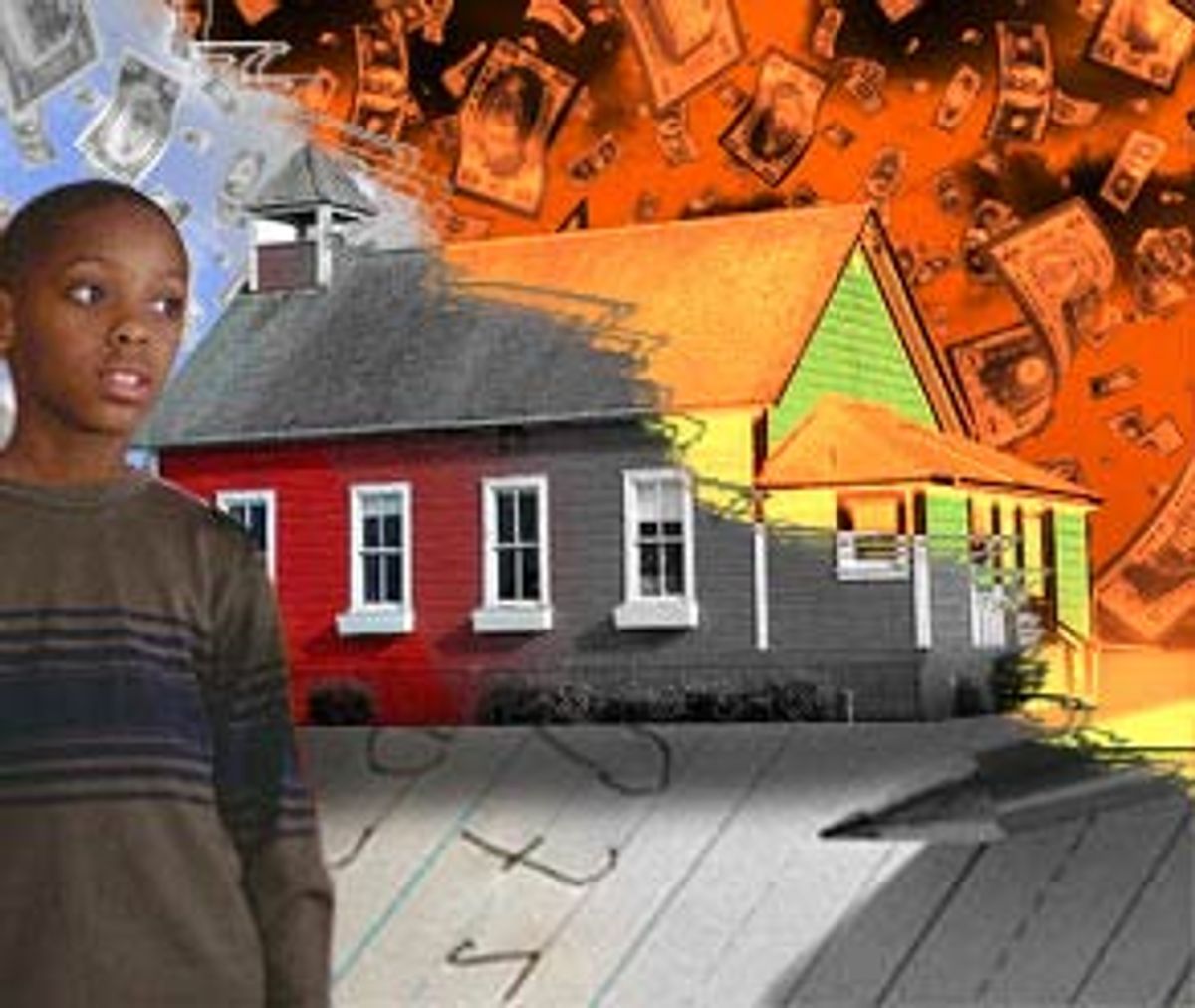 "The Shame of San Francisco" missed some crucial points about Edison Schools, and topped that off by using inaccurate figures that erroneously show Edison getting less funding than other district schools.

The article mistakenly compared Edison's funding from the school district alone with other schools' combined funding from district, state and federal sources. Including state and federal funding, Edison received $5,836 per pupil in its first year, not $4,200 as reported in Salon. (Source: Appendix F of the Edison charter.) And the comparison with Twenty-First Century Academy was not analogous, as that school is a K-8 while Edison is a K-5. Middle schools receive more per student than do elementary schools.

Edison does indeed receive more money than other district schools. Other schools' district funding covers teacher salaries and educational expenses as well as administrative costs, transportation, security, food service, major capital maintenance and other services. But under the Edison contract, the money that the company gets per student does not pay for those additional services. It goes entirely toward salaries and educational expenses -- or whatever Edison wants to do with it, under the for-profit arrangement.

In Dallas, school trustees are currently in turmoil over the estimated $20 million annual extra cost of seven Edison Schools there. Two of Edison's earliest contracts, in San Antonio and Sherman, Texas, are not being renewed because of high costs to the districts. Sherman officials estimated "hidden costs" of the Edison contract at $1 million a year for 13 schools with lackluster achievement.

Edison's claims of student achievement are highly questionable as well. Edison Charter Academy has revamped its student body, with California law prohibiting automatic assignments to charter schools. A pool of extremely disadvantaged students was previously automatically assigned to the school. Now all enrollment is by request, encouraged by aggressive outreach to middle-class families. Statistics clearly show that Edison's percentages of low-income, special-education and African-American students have plummeted. Edison's own figures show that its percentage of economically disadvantaged students dropped by just under one-quarter from last school year to this year. The fact that Edison receives more district resources than other schools unjustly harms other children. Edison investors' and donors' support provides a longer school day and year and more teacher training. Yet even with higher funding and its revamped student population, Edison posts feeble achievement gains.

Low-income students district-wide outperform low-income Edison students at every level in reading and math in second through fifth grades by up to 20 percentage points. Edison's modest gains are matched or bested by eight other low-performing schools with similar demographics. And in the reported subjects, math and reading, Edison tested only 73.49 percent of its students. Testing fewer students lets it drop likely low scorers from its averages. (Figures refer to spring 2000.)

Edison brought with it corruption and conflict. It cut its San Francisco deal amid costly rewards and payoffs for school board support plus coercion, deception and threats to get teachers' signatures on the charter petition.

Now San Francisco's school board is under heavy media fire for investigating whether Edison is fulfilling the terms of its charter, something the board committed to do all along but neglected until a new majority won seats in November's election.

Yes, Edison buses parents to meetings to testify. Presumably, these are parents of higher-performing students who like the free computers and longer school hours. But is it fair to drain resources from other schools to benefit their kids, while dumping challenging students on other schools? And shouldn't those parents question the lackluster results achieved even with all those benefits?

Edison vows an expensive, bloody court battle in San Francisco. The same fight will ensue if the charter isn't renewed at its 2003 expiration. Six of the seven board members believe it's their duty to review the charter now, since the board hasn't done so previously as promised. The battle threatens to cost plenty, but the option is to let Edison declare itself totally unaccountable to our school district forever.

Caroline Grannan is right about Edison's funding: The per-pupil figures I got from Edison did not include additional state and federal funding, and the total this year may well be close to the $5,836 figure she cites from the first year. I regret not succeeding in my attempts to dig deeper into Edison's funding structure -- and as I said in my article, the Board of Education's complaint about Edison's financial reporting may well have merit, if my own attempts to get clear and current fiscal data from the firm are any guide.

But there are other high-poverty San Francisco schools that receive roughly the same amount as Edison, when all of their public funding is factored in. (The Twenty-First Century Academy's middle-school component doesn't explain the vast sums it receives, since it also gets far more than any local middle school but one.) At too many schools, high levels of funding have not correlated with an improvement in academic achievement. The fact remains that few schools have been able to post the gains Edison made in two years -- gains that can hardly be described as "feeble."

Before Edison took over, 70 percent of second graders ranked in the bottom quartile on standardized reading tests; 55 percent did in math; those numbers have dropped to 42 percent and 19 percent, respectively. Kids have jumped out of that bottom quartile, though less dramatically, in other grades, and the proportion of kids testing in the top quartile has jumped too.

While opponents claim those gains have been made by changing the population at Edison, the school's data shows that students who remained at Edison after the private company took it over have seen their achievement rise, too. Over two years, students who stayed at Edison gained an average of 15.6 percentile points on standardized tests, according to Edison's own research, which the district has not refuted.

Yes, a handful of low-income San Francisco schools have posted bigger gains, for certain grades and in certain subjects, but the reasons for that vary. Some have had reform programs in place longer than Edison has. Others have seen demographic change, as has Edison. But Edison is the only school that raised test scores for every grade, in every subject, for every racial and ethnic group. The district does not dispute that claim.

The charge that Edison has reduced its special education population doesn't stand up. The percentage of special ed kids was 4.5 when the company took over, rose to 6.9 in its second year and is back at 4.5 percent. Getting accurate numbers on how many students are economically disadvantaged is difficult. The school district's numbers differ from the state's, but by both accounts Edison remains a high-poverty school. Edison denies the charge that it only tested 73 percent of its students, claiming advocates are misreading its numbers. State Department of Education data show that Edison tests 95 percent of its students.

But it's true that while the percentage of low-income disadvantaged children remains high at Edison, the school benefited from two changes: All students must now choose to go there -- they are no longer assigned by the district -- and roughly 130 more students attend the school than did before the company took over. That does give Edison an edge in boosting test scores, because it no longer serves the poorest of the poor, the kids with no other options. But it has long been district policy to try to racially, economically and socially integrate its schools; the problem is the district has rarely accomplished that goal as well as Edison has.

In fact, one of the biggest scandals in the history of San Francisco school desegregation was its policy of busing poor black and Latino students from faraway neighborhoods over to educational disaster areas like the old Edison, in the name of "integration." It should have attracted the kind of protest the charter experiment has, but strangely, it did not. Edison is to be congratulated, not attacked, for attracting more diversity.

My article acknowledged that Edison, Inc. nationally has a spotty record; it did not set out to examine its troubles or accomplishments in Dallas or anywhere but San Francisco. In San Francisco, the fact remains that Edison Charter Academy is a school that has turned itself around dramatically in two short years. And at a time when the district is under fire for budget shortfalls and myriad problems with low-performing schools, the newly elected Board of Education majority has devoted far more time to ridding the district of Edison than improving other schools. That is the shame of San Francisco, and Grannan's arguments haven't convinced me otherwise.


Letters to the Editor

MORE FROM Letters to the Editor