Business in the front, party in the back

The mullet is the 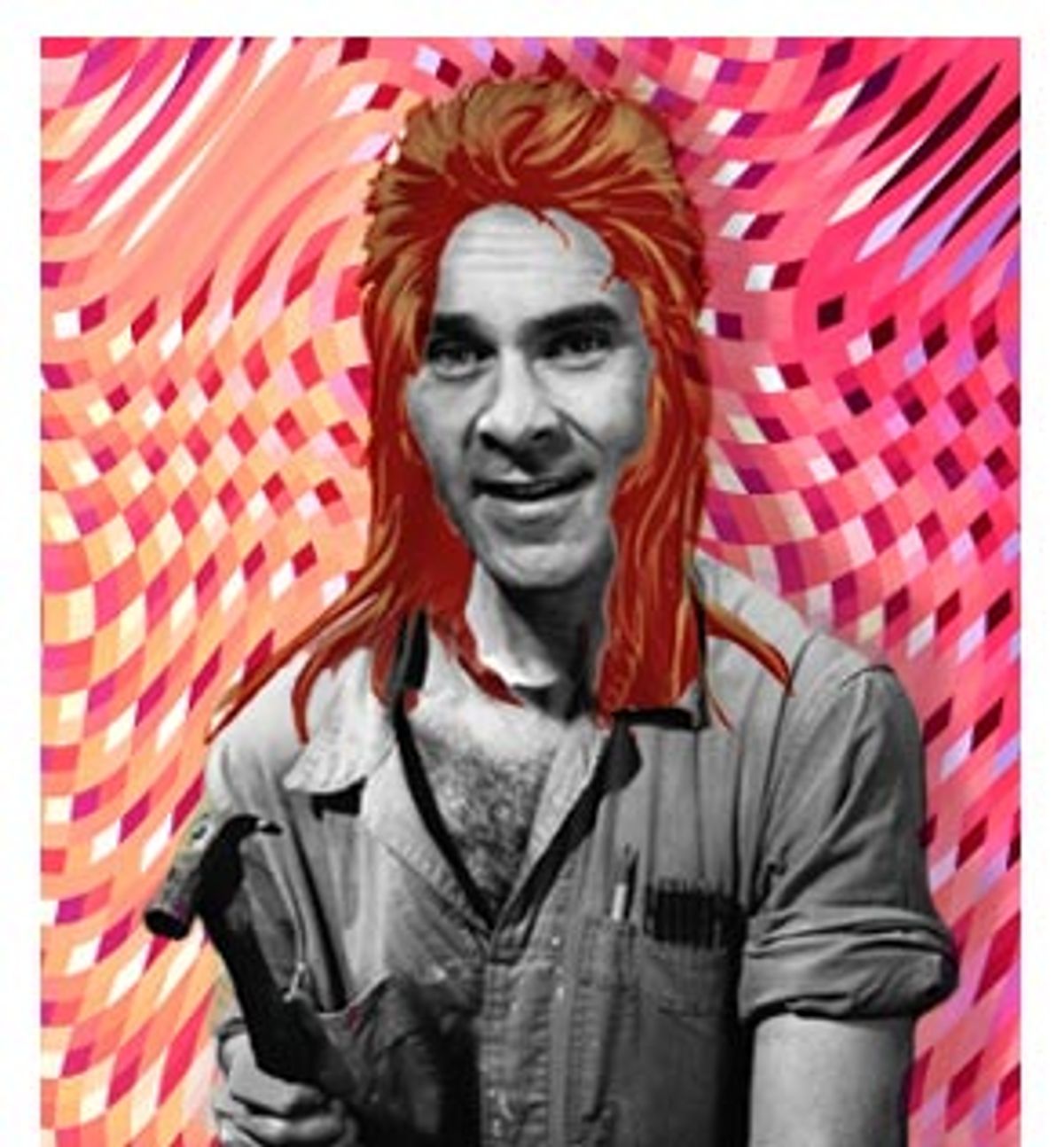 Meet the new new fashion icon. Unlike Chloë Sevigny or Aerin Lauder, he does not spend his days puzzling over the newest Christian Louboutin boots or wondering whether black is the new black or whether it's really just next season's taupe. No, Joe Dirt is a "Trailer Trash Wig Wearin' Acid Wash Jean Lovin' Rock Concert T-Shirt Sportin' Hero," a janitor alone in the big city, and he's mostly just worried about whether his mullet is properly fluffed in the front.

The mullet's star has been rising for the last year, but as of April the ultimate white trash haircut officially went fashion supernova: Vogue declared it the hairstyle of the moment and began offering its deluded readers mullet-primping tip. ("The only way to wear the mullet is with plenty of attitude. And don't blow-dry it back!") Models at Givenchy and Ungaro have been sent down the runways with mulletesque hairstyles, choppy and short in front, long and full down the back of the neck. And the mullet is all over the movies, from Hilary Swank's trailer trash do in "The Gift" to David Spade's bona fide rocker mullet in "Joe Dirt" (opening this week at the multiplex next door to your local 7-Eleven).

And then there's my East Village fashionista friend, Eugene, who recently visited from New York sporting a genuine mullet, thick with hair spray and sticky product. He wore it with a Rolling Stones sweat shirt (featuring those snarling red Jagger lips) and a pair of skintight, acid-washed Vivienne Westwood jeans, looking, no joke, like an outtake from the "Joe Dirt" movie poster. Very trashy, very '80s, very now and very, very hideous.

The cardinal rule of the do is that the more fashionable you are, the more unfashionable your hair must be. How else to explain the sudden revival of mullets and Afros and feathered hair, some of the most unflattering hairstyles of the past few decades? When your hairdresser suddenly starts sporting a ducktail, when the trendy new club is packed wall to wall with what would appear to be hair "don'ts," when John Galliano is sending the trailer trash look down Dior runways, it's time to reassess your safe locks. Much as avant-garde fashion is often the ugliest, most unflattering and therefore most stylish clothing you could wear, intentionally bad hair makes a statement: I'm so cool, I'm uncool.

For example: The last place you might expect to see a mullet hairstyle is at a swanky San Francisco club on a Sunday night, but there it is, lounging right near the bar. Granted, it's not a hideous mullet -- as far as mullets go, it's rather innocuous and somewhat chic -- but it's at least a close cousin to a mullet. The hair at the back is long, kind of flippy at the ends, brushing the guy's collar; and the sides and top are shorter and fall forward into his face. In the world of STLB (short top, long back) haircuts, this one qualifies.

Mr. Mullet is making small talk with White Trash Mafia Wife, a larger-than-life bottle-blond diva in head-to-toe black, who has peroxided her hair until it practically glows in the dark and has teased it up on top of her head in a gravity-defying ponytail. Very Ivana Trump, circa 1989, with an echo of Sharon Stone in "Casino."

"Being fashionable is really conforming to the current or popular style. This is easy and can be quite boring; just look in a magazine or walk into Banana Republic. Then there are the people who seem to always be one step ahead -- the trendsetter," says Brian, he of the '70s London shag. "Most observers of the 'trendsetter' will think the trendsetter's style is a bit off or 'unfashionable.' But that's a good thing."

The mullet, for example, has spent much of the past year making an admirable comeback -- although the word "comeback" implies that the mullet was once fashionable, which isn't actually the case. Best known as the hairstyle of redneck hicks, South American soccer players, '80s country stars and butch lesbians, the STLB haircut suddenly boasts an entire movement of otherwise fashionable fans.

The resurgence began with a coffee-table book -- "The Mullet: Hairstyle of the Gods" -- and an army of fan sites devoted to mullet spotting. The hairstyle starred in an episode of MTV's "The Real World" when Matt, one of the show's preciously self-aware youths, took a video camera on a "mullet hunt" around New Orleans, proclaiming that "the mullet is quite possibly the coolest haircut known to mankind. Business in the front, party in the back."

This was, of course, all done in the name of post-millennial irony; Matt the Mullet Hunter would himself never cut his hair into a mullet (though he did bleach it blond and crop it into a hideous spiky crown). For most devotees of the mullet, public adoration of this hairstyle is merely a wink-wink, nudge-nudge indicator of cool, just as teen skate punks might admire the Afro but would never have the guts to grow their curls out. The Matts of the world would rarely go so far as to get the actual haircut; instead, they prefer to sit in safety on the sidelines and express their self-satisfied ennui from a distance. Only the most confidently fashionable would actually get an ugly white trash haircut.

And in recent months, the über-fashionistas have done just that. As the mullet's star rose in the past year, as hairstylists, rock stars and independent-movie icons adopted the hairstyle, it transitioned from joke to fashion statement. "Requiem for a Dream" star (and occasional Cameron Diaz boyfriend) Jared Leto was one of the first: In recent photos, you can catch Leto's mullet flowing, feathery and light, down his back, a gentle Marlo Thomas flip with a choppy white trash fringe. The lanky front strands -- parted dead-center on his skull -- frame his face with short bleach-tipped wings. He looks like an extra from "Heavy Metal Parking Lot"; naturally, he was immediately granted a fashion spread in Nylon.

Of course, you can pull off sporting bad hair if you are otherwise excessively stylish or already a movie star. (If you are rich, bien sur, you can get away with anything, which is why so many fashion faux pas begin with the famous.) But only the superstylish feel compelled to actually get an ugly haircut, anyway: Having done it all, seen it all, tried it all, what's left except the fashion mistake? It's the only way to stand out in a crowd of nice safe bobs and Caesar cuts, much like you'd wear the distressed Gaultier motorcycle jacket because it's more noticeable than that prim Prada ensemble. As Brian puts it, "'Cool' hair is hair that is different, hair that stands out. I may not like the style, but as long as someone is making an effort to be an individual, I think it's cool."

The most striking thing about the sudden explosion of bad-hair-as-good-hair is that it is a kind of anti-retro movement, as if the trendsetters of the world woke up one day to discover that there were no truly new haircuts to try, and so traipsed back to revive the most obvious offenders from the past. Much like the recycling of vintage clothes -- fashion errors of past decades returning to the runways while the painful memories are still fresh (read: leg warmers, bell-bottoms, shoulder pads, camouflage prints) -- egregious period hairstyles are also making comebacks.

Unlike vintage fashion, however, retro hair has less to do with stylistic nostalgia and more to do with a whimsical sense of irony: recycling the most hideous cuts worn by the least glamorous suburbanites from our most unattractive decades -- how witty! What's more ironic than a $300 '80s-revival white trash haircut worn by a model who is paid $2,000 an hour to look modern and beautiful? (The most fashionable rich know that they shouldn't actually look rich; nothing is more gauche!)

Versace, for example, last year revived the '70s Miami society wife look, caking Amber Valetta in pale blue eye shadow and teasing her stiff, blond hair into a fluffy blowout of extravagant heights. The Farrah Fawcett feathered do, another painful look from the same era, has also reappeared among the more fashionable fashion icons: No Doubt singer Gwen Stefani, whose shocking-pink feathered hair earned her a coveted Vogue/VH1 fashion award, and Drew Barrymore, whose peroxided feathers in "Charlie's Angels" were an ironic nod to her glamorous namesake. It's just a matter of time before Chloë Sevigny shows up in a Mohawk, which, thanks to the punk rerevival, got its very own eight-page fashion spread in the March Vogue. (We are, after all, entering a recession, and glue is much friendlier to a pinched pocketbook than Kiehls Silk Groom.)

Similarly, the Afro, originally revived by hip-hop kids seeking insta-old-school soul, is now creeping into more traditional style circles, popping up on actors and models mimicking Lauryn Hill's crooning cool. And just when you thought crimped hair had mercifully disappeared sometime during the mid-'80s when the high schoolers finally shorted out their crimping irons, it's making a comeback in Hollywood as the frizzy geometric locks burn up the red carpets. Remember the brief phenomenon of hair mascara, those quintessential '80s hair paints that let you streak your do with crusty neon hues? Brought back by Christian Dior more than a decade later, sold out at makeup counters all across the country and then gone yet again as quickly as it arrived.

With the media machine force-feeding the world ever faster images of beauty and cool, it's no wonder that the most forward-thinking individualists would want to rebel. Hair is, after all, the ultimate identifier: You can wear the most mundane pair of jeans and a plain white T-shirt, but your haircut will expose what you really think about yourself: the military buzz cut, the sideburns, the dreadlocks, the preppy bob, the long girlie locks, the punky purple rat's nest. We are what we choose to hack off our heads.