The man who brought you a cross-dressing kangaroo, a necrophiliac lobster and Robert Goulet takes you inside the mind that made "TV Funhouse." 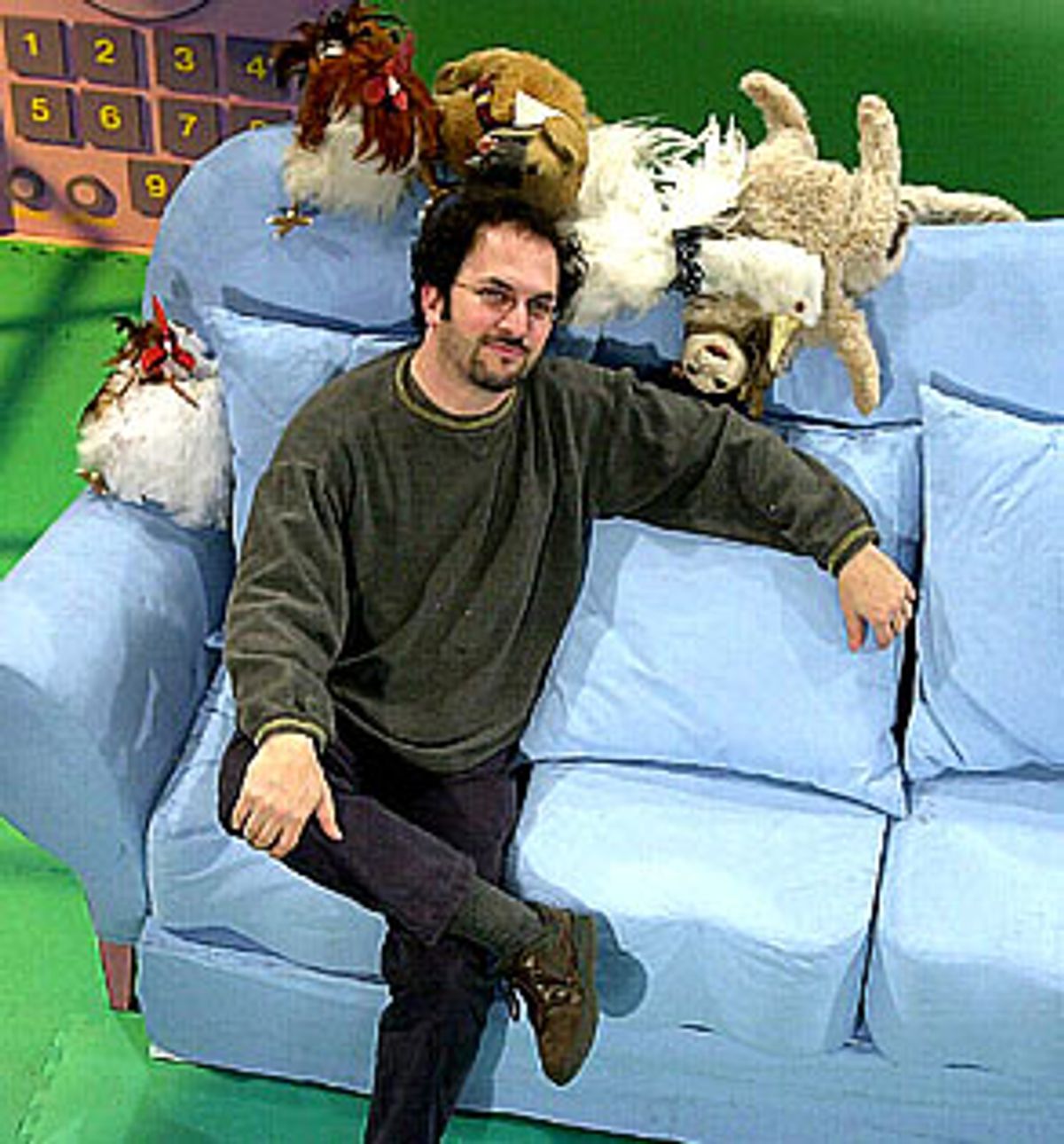 For years, Robert Smigel has been keenly aware of the robust comedic results that occur when live animals and puppets commingle in the Bob Guccione sense of the word. With a double decade's worth of experience writing for "Saturday Night Live" and "Late Night With Conan O'Brien," Smigel now has his own show and gives mounting proof that he is indeed America's most perverse puppeteer. Largely inspired by the popularity of his Triumph, the insult comic dog character from "Late Night," Smigel (along with Dino Stamatopoulos) developed "TV Funhouse" for Comedy Central.

In its first year, the show has proved to be less like a kiddie-show spoof and more like a version of "Caligula" staged by the 4-H Club. The cast members include a band of foulmouthed, surly and abusive animals known as Anipals, along with the well-meaning human named Doug, whom the Anipals generally ignore. So far this season, the Anipals have taken debauched road trips to places like Tijuana, Mexico, and Atlantic City, N.J., and have managed to engage in garden-variety degrading and deranged behavior. Can TV this good possibly last?

The cartoon show parodies you've become famous for, like "The Ambiguously Gay Duo," are so accurate in look and detail that one starts to suspect that you did a lot of serious TV time as a kid.

I did, I did. I wouldn't say I was a latchkey kid, but my parents let me spend a lot of time staring off into escapeland. Yeah, I'm a nerd when it comes to certain kinds of television. I know about the shows Bob Denver did after "Gilligan's Island," that sort of thing. I'm ill. I've been ill for years. I collected TV Guides. I told TV Guide this and it couldn't even print it; it was too disturbing for a family magazine. For some reason, I hungered for that kind of information about TV. It's the kind of stuff that's now omnipresent and repellent. You know, all this media information that you can't get away from now that obscures whether a show is good or not. Now they publish the Nielsen ratings in the paper every week -- and that was the kind of information I was just desperate to know about when I was 8 years old and found such things interesting.

Any special shows that still have a resonance for you?

"Mister Ed" was the first show I remember wanting to watch every week. I hear Alan Young has since become a man of the cloth and now swears that Mister Ed didn't get shocked or have an electric prod up his ass or anything. I had a Mister Ed record too. That was amazing -- he started talking about the Bible. They must have licensed the rights to use Mister Ed's likeness to some Christian fundamentalist.

I read somewhere that Charles Schulz's "Peanuts" also played a major role during your rare forays away from the small screen as a child.

It was fantastic. Growing up it was a revelation to me. Now it's been copied a million times, but rarely as well. Even though there's plenty of shows and comic strips now with wisecracking kids, they always sort of have to win. They try to have it both ways in shows like "Doug," where the kids are wiseacres and have personality quirks, but at the same time, there's always some morality play. The beauty of "Peanuts" was that there was none of that. It was clearly for adults, and I just reacted to it profoundly because I couldn't stand cartoons that talked down to kids. When Schulz died all the obituaries focused on the dark elements that he brought to comics. And that's very important and very significant, but he also brought a lot of surrealism to comic strips that he really never got the credit for. You know, Snoopy resting on top of his doghouse and pretending to fight the Red Baron and that kind of nonsensical imagery didn't exist in comics either.

Any favorite old cartoon shows that have stuck with you through the years?

Well, there are certain Hanna-Barbera voices I can never get out of my head. I love the fact that this guy Don Messick did the voices of both Bobo and Ranger Rick, so that even though one was a tiny bear and the other was a human, they both said "Yogi" the same way. They're very lax about things like that. I guess they wanted to save money.

In your "X-Presidents" animated shorts, it's great to see them spontaneously perform as a rock band, much in the tradition of those great hack cartoon shows of the '70s. How did you match up the ex-presidents with their instruments?

Were there early ancestors to the Anipals puppets we now know and love in "TV Funhouse"?

My wife found some cool puppets right when I started at "Conan O'Brien" that she knew would crack me up. And she was right, because their faces were detailed and realistic -- these tiny little latex faces. One of them was Triumph. So I played around the house with them for months. (She tolerates this kind of idiocy and that's why we're a happy couple.) We both just laugh at how unrealistically cute and misrepresentative of the dark world they are. But we also love them because they're so cute and misrepresentative.

Any trade secrets behind comedic animal and puppet work?

I had all these crazy rules when we started on "Conan O'Brien" that I tried to impose on the writers, and one of them was that in animal bits, the face always had to be realistic as an animal, because it's just much funnier to see a realistic-looking animal talking than a cartoony-looking one. And I definitely [wanted] no human faces inside animal bodies and that kind of Fruit of the Loom crap. Generally we try to stay away from that stuff. I'm not interested in making animals do stuff and dealing with trainers -- especially. In my years at "SNL" and with Conan, we had to deal with a lot of them and I could never believe they were in this business, because they seemed to hate animals more than anyone I've ever seen. And they don't seem to have any skill at actually training the animal, other than yelling at it and manipulating it forcibly. I used to call some of the people we worked with at "SNL" "animal havers" instead of animal trainers because that was their big skill: They have the animal.

Along with the cross-dressing kangaroo and the serenading tequila worm, one of my favorite incidental characters from "TV Funhouse" is that ornery, homophobic, necrophiliac lobster. What's the story behind him?

He's just the classic hypocritical moralist. [In lobster voice] "This world is being overrun by freaks and queers!" And then he goes and fucks a dead lobster! It's so much more fun to make these points when you're doing it with lobsters instead of people.

How was it determined that this plastic lobster would speak with such a sibilant slur?

When we were coming up with a voice for him, the only suggestion I made was that he should sound like a male Ann Landers.

How did you ever get Robert Goulet to appear in that two-part Atlantic City episode of "TV Funhouse"? Did he know what he was getting into?

Well, I found a Robert Goulet Web site. Goulet has this personal Web site that is worth exploring. It's got a great picture of Goulet in a tux, and then you click on and you can read Goulet poems and see Goulet doodles. There was an office number, so I called and practically had him booked for the show in 10 minutes. He had seen Triumph and I let him know it would be the same sort of raunchy stuff. He was OK with it, though he wouldn't take his shirt off for the Jacuzzi scene.

It's surprising that with your success at "SNL" you haven't written a feature-length film. When are you going to go Hollywood?

I can't seem to get movies past studios. It's a different world. They all live by these formulaic screenplay rules and my stories have always been too joke-filled. I can't tell you how many times I've been told my movie doesn't have enough heart or enough story. I started in the "SNL" mill and I did a Hans and Franz that Arnold Schwarzenegger suggested -- so we wrote a screenplay. It had a big part for Schwarzenegger, but he refused to do it because "Last Action Hero" bombed. That set me on a downward spiral of failures in movies. For example, I did a "Super Fans" movie [script] and that was the worst experience because it was like, "We love it, we love it, we love it ... wait a minute, where's the heart?" There was no corny bullshit. It was satire that I wrote with Bob Odenkirk about the corporatization of sports and that was it.

I'd like to end by dwelling on some more of your personal failures. As the head writer for the quickly canceled "Dana Carvey Show," what did you learn from that experience?

Don't follow "Home Improvement" with a lactating president. I also learned that you don't go to a network that has never done anything remotely like what you're doing. Even if they say, "Yeah, we don't do this, but this is the kind of thing we want to start doing," just run for your life. That show was like the loose girl that they wanted to pop their cherry with, but then dumped immediately so they could go settle down with "Drew Carey" and "Dharma and Greg."