That's "Mistress Freelancer" to you 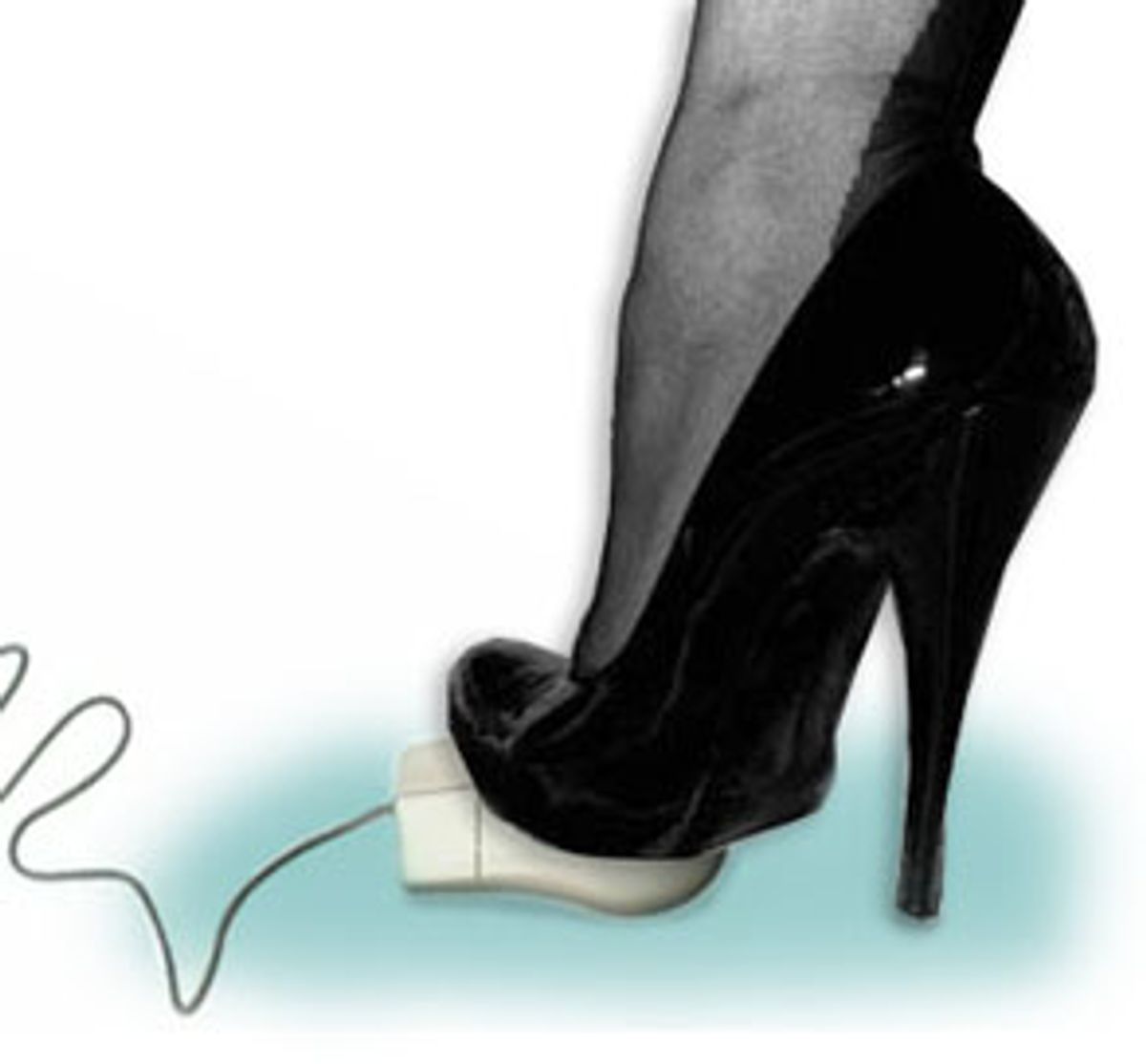 It's no fun being a tech hack these days -- beating up on floundering dot-coms, ladling on the purple prose for tear-jerking layoff stories and generally dancing on the grave of the Net downturn, shouting "I told you so!" or scolding "We should have known!"

Worse still, there are fewer and fewer outlets for the tech journalist's true-life stories of boom gone bust as the tech rags and Web sites that grew bloated from the trickle down of venture capital billions shrink or disappear right along with the subject they cover.

Natasha (not her real name) had been a full-time freelancer for six years before she became a "domme" last December, and has since recruited three of her laid-off dot-com friends to her new profession. Maybe Natasha's career trajectory from flush techie freelancer to mistress is a sign that the old San Francisco is coming back -- the city that was proud of its every decadent perversion before the dot-com explosion transformed it into a money-grubbing bedroom community for Silicon Valley.

Work fell in my lap for years and years and years. I'd been turning away work. This winter is the first time in six years that I had to start talking to my editors, saying, "You got any stories for me?"

About November it started to get a lot harder. Publications were shutting down; Web sites I worked for were suddenly gone. I used to write for Chickclick, and now there's no more budget for freelancers there. I worked a lot for the Industry Standard last year. They, for the most part, have stopped using freelancers, because they have a big staff and of course they dump the freelancers first. I'd done a bunch of work for iCAST, an entertainment site, but that left months and months and months ago. I worked a lot for TechTV, but the show I'd been working on for the Web site went away.

It's sort of tragic.

When it started to get really shitty, I thought, OK, if I want to keep doing this type of reporting on technology, I'm going to have to push a lot harder to do it. And you know, I don't really love it that much, so why am I gonna push like crazy to do something that doesn't really fill me with joy?

I made a list of my skills. I could be some type of manager, because I'm very good at being a big, bossy, pain-in-the-ass bitch, or I could be a great teacher, a good public speaker, a stand-up comedian.

I saw this ad in an adult newspaper: "Female Actresses Wanted: Dommes and Femmes." I was like, OK, why not just call? I've spent half my career on the telephone interviewing people, figuring out what the deal is, what the 411 is.

I called the guy, and he didn't want to tell me anything on the phone, so I went to meet him. And, Jesus Christ, I was nervous. Of course I arranged to meet him a restaurant, but you don't know who the hell is going to be waiting on the other side. Is it my dad? Is it somebody I used to work for? Is it going to be some horrible ogre?

I was terrified, but I went to the restaurant. I met him and we had steaks, awesome steaks.

Anyway, he said you have to be passably cute, reasonably sensitive to other people's thoughts, emotions and fantasies, open-minded and self-assured. These are the qualifications. And most of all smart: You really have to be able to understand where somebody is coming from, empathize with them, figure out what they want and give it to them.

And be smart enough to turn on a dime if things start to go downhill.

What was the next step?

So for five or six weeks, I went to his house every Saturday. We had a volunteer, a masochist. The training sessions were totally surreal, because it would be beautiful weather and I'd go inside this dark room with these two men and one of them would take off his clothes.

Did that freak you out?

Do you now see clients alone?

No way. I am so concerned for my own safety, I would never do that. My boss sets up appointments and then I go to his house. And there has to be more than one person there. It can't just be me. There has to be another person sort of listening -- not listening in, but making sure there are no horrified screams or chain saws going or anything like that.

When did you have your first client?

It was just one weekend when I went to my boss's house, thinking that I was going to have a training session. He just turned me loose. He was like "OK, we've got a guy. He's going to be here in 25 minutes. It's your first."

How many times have you dominated someone now?

What do you do when the customer shows up?

It's pretty much the exact same thing that I do when I'm working on a story, which is that I interview people.

You have to be able to gently extract from them what it is that they want without forcing them to go through a list. "First, I want you to beat me up the thighs." That's really unsexy.

But usually when they come in, they've called and made an appointment with my boss, and he will ask them what they want -- like enforced feminization, which means that you dress them up in girls clothes, put on makeup and go: "Oh, you're so pretty. Oh! We're girlfriends shopping together." Either they want you to talk about how pretty they are and how you're girlfriends hanging out together, maybe even like lesbian girlfriends, or they want to be humiliated. They want you to say, "You're such a sissy! You're so bad!"

That is going to be my specialty because I like to dress people up, and I like gender-fucked things.

Does your boss describe you on the phone?

No, he just says, "Well, Natasha is available at 2 p.m. She can take care of you." They don't have a choice. I love that. I thought that they were going to come in and look me over.

Have you ever been in a situation where you felt like you went too far? Or you stopped too soon?

Yes, absolutely, all the time, because I'm new and I'm just learning. They have safe words; they can say "yellow" or "red" or "green." If they're thinking, "Slow down," that's yellow. I've had a couple of people say "yellow" to me.

I also had a bizarre session. This is so twisted. I actually went and topped somebody that I knew, a woman who I used to work for.

Yeah, I know. Tell me about it. We just started talking about it, and I didn't work for her anymore, and she's like "I'd love it if ..."

I worked for her at a magazine. I can't tell you which one. I remember calling somebody on the phone on the way over there, and she was like "Whatcha doing?" And I'm like "Going to go beat my editor with a wooden spoon." That was really weird. I didn't work for her anymore, or else it would have been even weirder.

Did it do weird things to your relationship?

Yeah, we haven't really hung out since then. Actually, in retrospect it was a mistake. It seemed so twisted, but I was like "Gotta do that. Gotta have that experience."

But she wanted things to be slower and more sensual and less painful, so I learned a lot from that, learned to ask people what it is they want. I did a terrible job with it, because I didn't communicate upfront about what we both expected and wanted from the session. So I hurt her: I went too far too fast, and she was not happy. At the end it was me saying, "I'm sorry! I'm so sorry!" And hugging her. I felt terrible.

Do you think that there's any overlap between technology writing and dominatrixing?

It's easier [than tech writing]. It's a lot easier. But it doesn't mean that it's easy. It's just that journalism is so hard, trying to track down every last fact and attribute every last source.

"Domming" is extremely exhausting. After an hour, you are exhausted because you're focused so intensely on that person, how they're feeling and reading their body language.

What aspect of dominatrixing is the most surprising to you, or unlike what you expected?

I was really worried that my customers would treat me badly, but they are so nice. They are so grateful that a woman is giving them attention. They're paying me, but they're still grateful.

And you know what's really weird? At the beginning of the session, they come in and I'm sort of skeeved out by them, and I don't want to get too near them, because I don't want to take the risk that they'll try to reach out and grab me.

But at the end of the session, it's like some sort of tender thing has passed between us, and I feel sort of close to them, and want to give them a hug as they're leaving. I almost always hug them as they're leaving because I feel like we've bonded, because we've had this intense experience. I never thought that I would feel that way.

Have you told your friends about domming?

Women are totally fascinated and titillated and turned on and want you to tell them long, very detailed stories. Men just instantly go into that turns-me-on mode and instantly start vibing you in this fucked-up, weird way. I don't like to talk to boys about what it is I'm doing. I prefer that they continue to think of me as a journalist.

How's the pay compared with freelancing?

[It costs] $150 bucks an hour, but I get half of that. You split it half and half with the house. The money is not actually as good as people think if you work with somebody rather than work for yourself, but I am so not ready to do that yet.

Is $75 an hour really going to replace your freelance writing?

No, I still need to write, and I still plan to write. But it should hold me over if I domme, like, four days a week and have two clients a day, maybe three on a heavy day.

Yeah, because it's very rewarding. It's like if I were a hairstylist. People would come to me, and they'd leave happy. I like to make people happy; it feels really good. I barely ever make people happy with what I'm writing, for Christ's sake. You write something and you get 20 hate letters. You know it's a good story when at least 10 people are writing to you, hugely pissed.