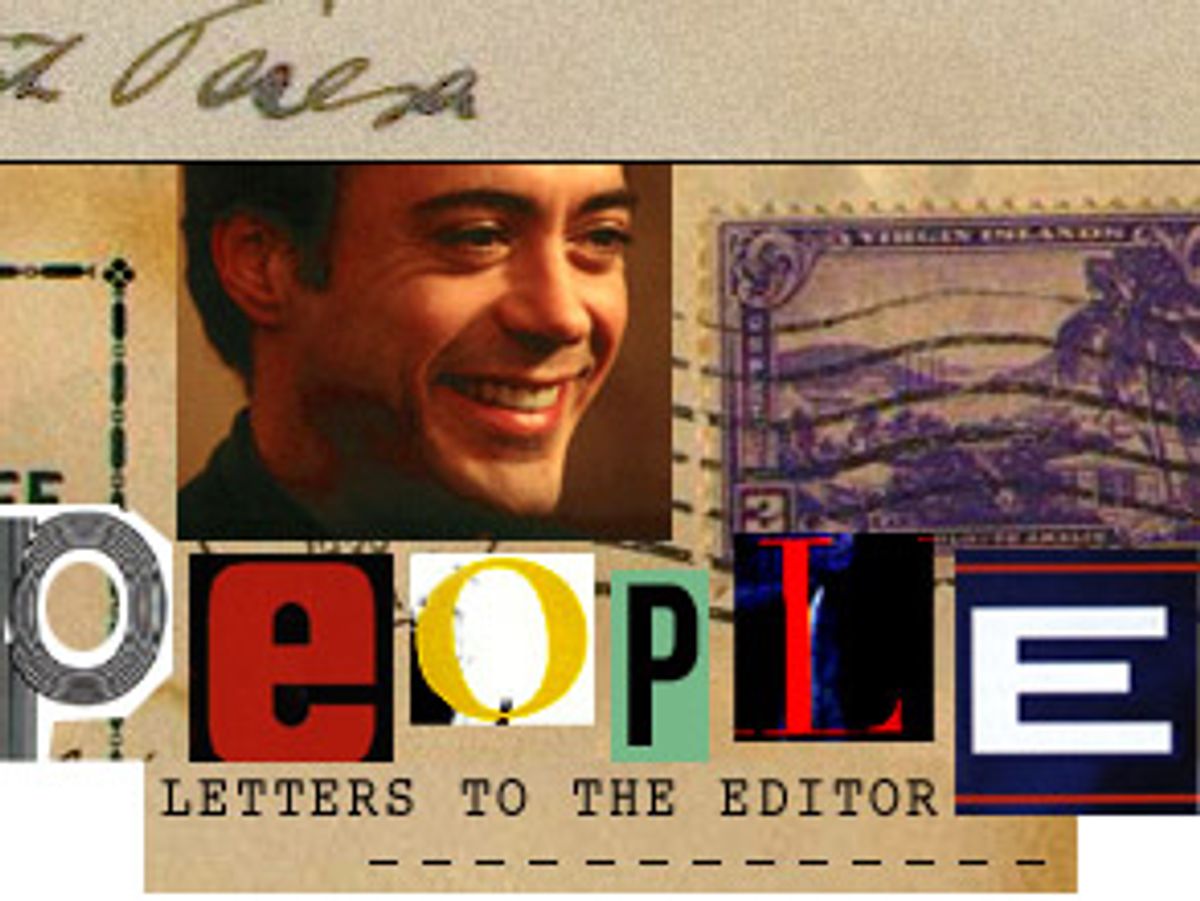 If I read that Robert Downey Jr. is the best actor of his generation one more time I am going to puke. I think he is a fine actor, but I sense an almost morbid need for journalists to get in their praise before he dies so they will be seen as prophets of greatness. They are like vultures preying on the legacy of James Dean and Montgomery Clift, hoping their prescient words will live on after Robert Downey Jr. becomes a legend.

If you really want to talk about acting greatness and someone who has truly lit up the screen in a performance as brave and melancholy and moving as early Marlon Brando, then look to Mark Ruffalo's brilliant turn in "You Can Count on Me."

Why can't we focus on actors who are diligently working at their craft, contributing beautiful performances, without the sideshow private lives that ratchet up sick fascination? It's time to give this glorification of Robert Downey Jr. a rest and find out what other actors are providing as their gift to a generation.

Charles Taylor's piece claiming that Downey is the greatest actor of his generation is an outrageous piece of hyperbole. Downey, his successful stint on "Ally McBeal" notwithstanding, is perhaps the greatest overactor of his generation. Critics seem to bite at his performances, but audiences, who know better, do not. His presence in a film has become the box-office kiss of death. Other than "Weird Science" and "Back to School," his films repeatedly flop, even when they are critically praised to the heavens like "Wonder Boys." He did a mean Chaplin impersonation, but so did that guy in the old IBM commercials. And who is he playing in "Less Than Zero" and "The Gingerbread Man" if not himself?

The chorus of praise for his acting genius arises whenever this tragic figure is in trouble with the law again, as though his alleged talent justifies special treatment. Downey needs serious help and is not getting it from friends, the industry or the courts. It is well known that his drug habits were stimulated by his father. For the sake of his young son, Downey should stop listening to the likes of Taylor, quit acting and get his life together once and for all.

Thank you for an article that does not condemn a man before the trial has even begun.

Robert Downey may be temporarily down, but he is not out. I will stand with you and say his work to date can stand alone as some of the best performances of our time.

I will go further to say that if his talent is lost to us, we will have lost a national treasure.

I have been to every court date regarding his latest charges. What I find most interesting, but not unpredicted, is that 95 percent of the press only appears when Downey appears in court. His story has no relevance to them unless he is put on the spot.

Most articles convict the man before he has even gone to trial. Do we not still live in a country where one is presumed innocent until proven guilty? Have we boasted about our right to free speech so much that it does not matter if our words harm another human being?

I applaud you, Charles Taylor, for seeing beyond the gossip and hatred carried by so many other reporters.

I run a Web site that supports Robert's full recovery -- not a fan club.

Bravo, Charles Taylor, for your inspired and insightful article!

The level of artistry displayed by Robert Downey Jr. places him not only as the best of his generation but as one of the finest actors of any generation.

Our tabloid society doesn't quite seem to know what to do in the face of real art or real artists. Our celebrities are often treated as fodder for consumption, rather than respected as creative beings. We need to allow our celebrities to work out their personal challenges in private.

At the same time, I hope that something positive can come from all the unfortunate media attention on Robert's personal struggles. Perhaps his circumstances will inspire much-needed changes in our country's absurd drug policies. Drug addiction should be treated as a medical problem, not as a criminal problem.

Despite unfair drug policies and the onslaught of media hype, Robert continues on with inspired performances, proving that he is not only the living definition of "artistry incarnate" but a very impressive human being as well.

Thank you for shifting the focus where it belongs.

A brilliant piece of work. I can tell the man likes haiku, because so much meaning is in such small spaces.

Like Charles Taylor, I agree that Robert Downey Jr. is a wildly talented actor and that the bizarre pity party the Hollywood press (particularly Vanity Fair) has been throwing for Downey is a little twisted and strange. In the meantime, he has done some pretty good work. Nevertheless, isn't the canonization a bit early here?

Taylor himself points out that, with the exceptions of "Chaplin" and "Two Girls and a Guy," Downey's opportunities to test the depth of his skill have been limited. "Less Than Zero" reveals his potential, but remains too weak a film and his character too reminiscent of Downey's public life to qualify as great acting. Of course, the same could be said of "Two Girls" -- Taylor himself, only a few paragraphs after loftily dismissing the popular obsession with Downey's personal failings to focus on his "work," points out that the soliloquy in which Downey chastises himself in the mirror (ironically, he is covered in stage blood from a fake suicide intended to arouse the sympathy of the duped girls as he speaks the lines) feels as if it were written with a wink and a nod to the audience. Though Downey's performance is acrobatic and alarmingly engaging, it's a feat of human charisma more than of acting. Downey doesn't prove himself as a great actor so much as he proves that exceptionally witty and charming people can get away with a lot more than the rest of us -- particularly if they are independently wealthy.

Of course, Downey has (largely due to his various probations, rehabilitations and incarcerations) done quite a bit of engaging supporting work recently, but none of it qualifies as unparalleled achievement, and almost all of it consists of typecast roles: Crabtree in "Wonder Boys" is a wily, rambunctious and unpredictable trickster (and a drug user to boot); the "Ally McBeal" role is that of a smartass lawyer (Downey as a smartass? That sounds like a stretch); even his "One Night Stand" role draws so much on his goofy-wit persona and is so peripheral to the story that it's hard to see it as more than a casual riff from a stylish wit -- it's more like a cameo than a role.

Outside of the aforementioned films, we have the likes of "Weird Science" and "Johnny Be Good."

Of course, at this point, Downey's stuck with "Cruise-Hanks disease": His celebrity has become so widespread that it's basically impossible for him to ever be a convincing film actor again -- you'll never again see him in a role where you ever forget that he's Robert Downey Jr. So all we'll ever get from him, if we get to see him again at all, is more of the role of his life: the gifted screwup. This is frustrating to me, as I expect it is to most people who are devoting their lives to creative work who may not have the natural talent and certainly don't have the privileges or connections that Robert Downey Jr. has had since he was smoking dope with his father's Hollywood buddies when he was 12 years old.

I think it's about time people started looking at Downey's life as a cautionary tale instead of a romance. There are thousands of gifted actors/artists/musicians who never get a single one of the multiple breaks Downey has pissed away and which he received not because of his obvious genius as an actor but because of who his parents are. Downey's career is not brilliant -- it's one of boundless but unrealized potential. Ironically, the fact that he is a production liability has cost him a number of roles that might have allowed him to fall into the dismissive categories Taylor has allotted Sean Penn and Nicolas Cage. Plainly put, he's too much of a screwup to have been allowed ample opportunities to screw up.

Finally, it's important to note that Downey (as well as Penn and Cage -- both children of Hollywood) was receiving major roles in big studio productions while other actors of his "generation" -- Edward Norton, for example -- were doing dumb stuff like graduating from high school and studying acting formally. Give Norton, Jude Law, Tim Roth, David Thewlis or comedic geniuses like Steve Zahn and Jack Black a bit of time. Terms like "brilliant" belong to those who bring forth their talent rather than to those who tantalize us with its unrealized possibilities.