Macedonia on the brink

Colin Powell urges peace, but a walk through the capital city reveals a country on the verge of civil war. 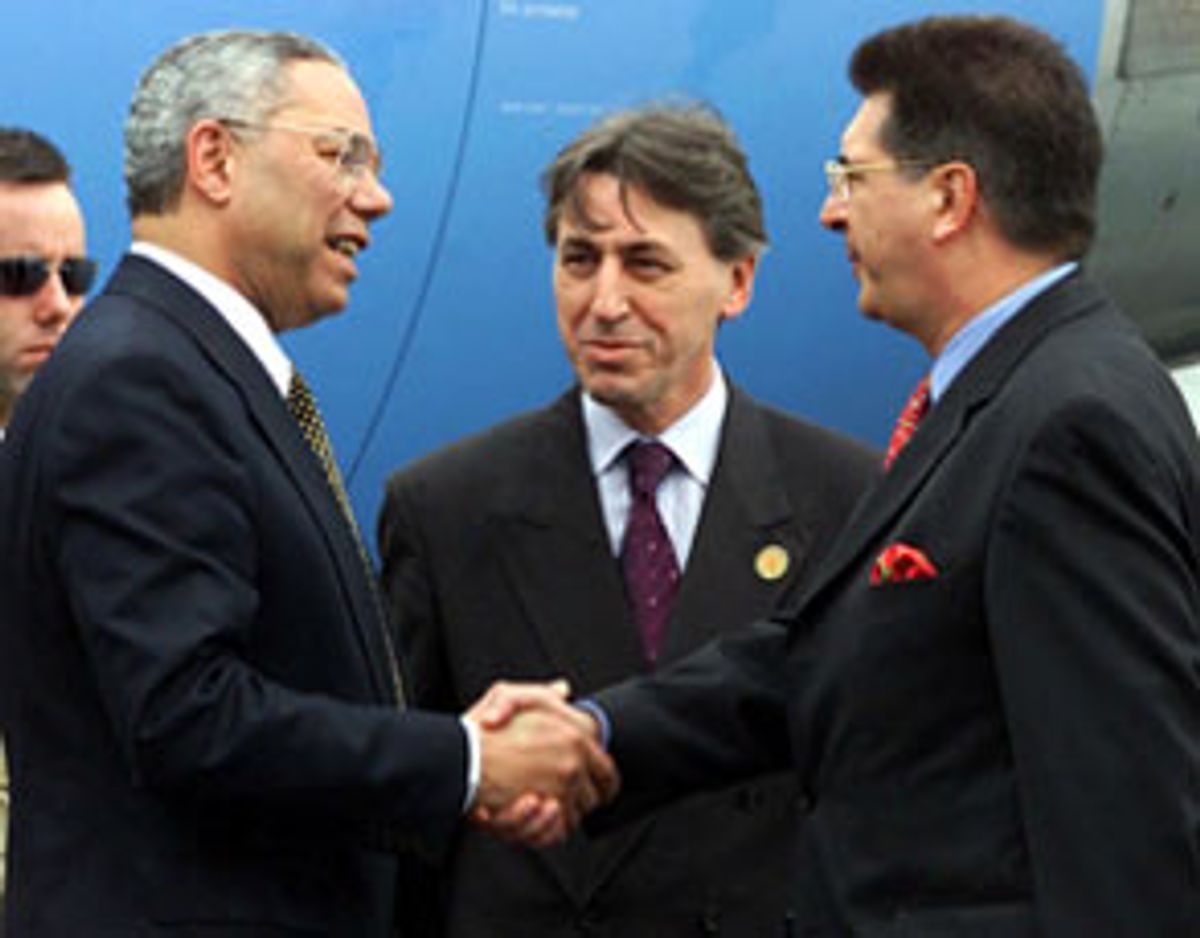 Only a few weeks after ethnic Albanian rebels seized villages along Macedonia's northern border with Kosovo, U.S. Secretary of State Colin Powell visited here Thursday to assure leaders of this small Balkan country that the U.S. supports their efforts to find a political solution to the country's ethnic tensions.

Though Powell praised the Macedonian government's restraint in using military force to combat the rebels known as the National Liberation Army (NLA), he also stressed that Macedonia must intensify efforts to bring its minority Albanian population more fully into the country's political and economic life.

"Multi-ethnicity need not be a source of conflict," Powell told a press conference in the Macedonian parliament after an evening meeting with foreign ministers from the region. "Diversity can be made into a strength, if channels are opened for all to be made part of the democratic and political process."

Powell's visit carries tremendous weight in a country desperate for signs of reassurance that the international community, and its strongest member, the U.S., will not allow Macedonia to experience the devastating ethnic conflicts that have riven other former Yugoslav republics including Croatia, Bosnia and Serb-held Kosovo. But while Powell pledged political and economic support for Macedonia, his statements suggested that the Bush administration would be more reluctant than the previous Clinton administration to involve the U.S. military in any crisis here.

Powell conveyed "the solid expression of support for Macedonia from President Bush and the U.S.," and expressed a commitment to remain engaged politically and economically and provide military support as appropriate. "We also provide an example of what can be done in a multi-ethnic society such as we have in the U.S. and how that multi-ethnicity can be a source of strength," Powell said.

The secretary's visit comes after two weeks of uneasy quiet here. In late March, Macedonian security forces managed, with the aid of four Ukrainian helicopter gunships and military advice from Britain and the U.S., to rout some 800 ethnic Albanian rebels who had seized six mountain villages above Tetovo, Macedonia's second largest city. The rebels threatened to "make Macedonia tremble" if the country's coalition government does not accelerate reforms to give its large ethnic-Albanian minority more language and political rights. Ethnic Albanians make up about a third of the population of 2 million people here.

Unlike the Kosovo Liberation Army, of which many of the NLA rebels are veterans, the NLA rebels took care not to demand a separate state or a change of international borders. Instead, the rebels say they are fighting to force Macedonia to give its Albanians more civil rights.

It's a message that appeals to many of Macedonia's ethnic Albanians, who say they are treated like second-class citizens.

"We Albanians are paying taxes here, we are citizens of Macedonia, but we are still waiting for the state to do something good for us," says Arsim, 27, an ethnic Albanian university student from Tetovo, who declined to give his last name. "We expected so much from democracy, but it has delivered us nothing. We have been waiting for 10 years for the situation to be better. This is way beyond frustration. I don't like to fight. I would prefer to fight for my rights in a political way. But this generation of politicians is totally corrupted."

But even now, Macedonia's Albanians are represented in the state. Since 1998, Macedonia has been ruled by a three-party coalition government that includes an ethnic-Albanian party, the Democratic Party of Albanians (DPA), led by a much-respected but ailing intellectual Arben Xhaferi. Despite the fact that many of the region's Albanians revere Xhaferi, Albanians have been disappointed with the DPA's failure to get results.

"The government has been talking for 10 years, and the result has been nothing," says Kim Mehmeti, a moderate ethnic-Albanian journalist and leader of a Skopje nongovernment organization (NGO) working to promote tolerance between Macedonia's ethnic groups. Although Mehmeti has spent his professional career trying to build bridges between Macedonia's ethnic communities, speaking at his offices this week, his bitterness is palpable. Some of his NGO's ethnic Macedonian partners have become the most outspoken critics of Albanian demands for government reforms. "The NLA rebels have already succeeded to open questions that the political parties did not do anything about."

But while members of Macedonia's Albanian minority complain that they are treated like second-class citizens, many of Macedonia's Slavic majority believe that their small, poor country already gives all political and human rights to the Albanians. Ethnic Macedonians say they fear that no amount of concessions will be enough to prevent Albanians from eventually demanding territorial autonomy, or even secession.

Asked how many signatures the students had gathered to foil Albanian demands, a young woman manning one of the three tables said "13,000," before turning to help the dozen people flocking to her card table to sign. Two hundred feet away from them was the old stone bridge over the Vardar River that leads to Skopje's Ottoman-era, cobblestone old town, inhabited and patronized mostly by ethnic Albanians. Of late, many Albanian neighborhoods in Skopje have been eerily empty of the usual children playing in the streets. Some ethnic Albanians here confide that they have sent their wives and children to stay with relatives in Kosovo, just to be safe.

In the northwestern Macedonian city of Tetovo, where just three weeks ago Macedonian security forces retook six nearby villages seized by NLA rebels, many of the town's ethnic Albanian residents seem to sympathize with the rebels.

As she tells it, Arlinda, 23, an economics student at Tetovo University, became a supporter of the NLA all in one moment. "I was walking through the town and hundreds of people were gathering to demonstrate for the NLA," the petite, dark-haired young woman, dressed in a dark-red leather jacket and black jeans, tells me, as we walk from a cafi in Tetovo. "I joined in. We were all chanting 'U-Ch-K, U-Ch-K,'" the Albanian acronym for the NLA. "And when there was shooting in the hills, I realized that I wasn't afraid anymore. No one was afraid. Every time we heard shooting, we chanted louder."

Arlinda, who, like others interviewed, declined to give her last name, and Arsim, have been discussing, over coffee in a downtown Tetovo cafi, the dozen ways they feel Macedonia shortchanges its ethnic-Albanian community, making them feel like second-class citizens in the country where they were born, pay taxes and vote. They are clearly fed up, and eager to explain to a Western journalist why a rebel movement has captured the imagination of young, even well-educated ethnic Albanians like themselves.

"The National Liberation Army is more popular in Macedonia than the Kosovo Liberation Army was in Kosovo," says Arlinda. When we get to her family's three-story red clay cinder block home, in the village of Drenovac in the foothills of the Shar Mountains just northwest of Tetovo, the violence of the past month is visible in the partial destruction of houses on the hillside, some hit by shells, others shot up by bullets. Inside her home, in a cool, bottom-floor living room covered with Turkish rugs, Arlinda's little brother's desktop computer screen saver features, along with photos of American rapper Eminem, downloaded Internet photos of NLA rebels, their military berets decorated with the red double-eagle insignia of the Albanian flag, and of smoke burning in the hills after a recent battle. The photos of the burning villages on the computer screen eerily resemble the scene outside their own home.

Arlinda points out the house on the corner, which she says belongs to two men from the Kuraci family who were killed by Macedonian police at a checkpoint three weeks ago. The video of the incident, which was broadcast worldwide, clearly shows the younger man clumsily pulling a grenade out of his suit jacket pocket after Macedonian police manning the checkpoint ask him to step out of the car. A panicked Macedonian police barrage of shooting ensues, killing both father and son. But Arlinda and Arsim say the men were only carrying cellphones; Arsim insists the video showing the man with the grenade has been doctored.

The anecdote is one of a few that suggest how people are being manipulated and radicalized by propaganda. (Similarly, ethnic Macedonians are hearing plenty of propaganda, verging on the level of hate speech, on their televisions and in their newspapers.)

As we sit in Arlinda's family's living room drinking Turkish coffee, Arlinda reads aloud some headlines from the Albanian-language press that say there are only 150 Albanians in Macedonia's force of over 9,000 police officers. Western diplomats say this is a terrible underestimate, although they encourage Macedonia to recruit and train more ethnic Albanian policemen and military officers.

Arlinda points to a news headline reporting that the western city of Struga was blanketed with pamphlets last week urging Macedonians not to buy goods from ethnic Albanian shops. But even now, unlike their cousins in Kosovo who faced extreme oppression, physical abuse and even massacres by Serbian security forces, Macedonia's ethnic Albanians mostly complain that they face a mix of official and unofficial discrimination, which many outsiders have witnessed. Arsim says Macedonia's Albanians are in the position of Martin Luther King Jr. But the rebel group he and many of his neighbors increasingly support, although it's quiet for now, seems to borrow more from the violent methods of the Black Panthers and the IRA than King's civil rights movement.

One of Arsim's and Macedonian Albanians' major gripes with the state is that it refuses to recognize the Albanian-language university that was opened in Tetovo in 1994 to fill a need created after nearby Albanian-language Pristina University in Kosovo was seized by Slobodan Milosevic and Serb nationalists. Tetovo University has become one of the flashpoints of tension between the country's ethnic-Macedonian majority and ethnic-Albanian minority.

"We are not radical," Arsim, who studies Albanian linguistics at Tetovo, insists. He and Arlinda are both children of professors at the university. "We would just like the university to be officially recognized and financed by the state."

They point out that the Macedonian government funds Macedonian-language state universities in Skopje and Bitola.

Other Albanian demands include making Albanian one of the official languages of Macedonia, revising the preamble of Macedonia's constitution to declare ethnic Albanians a constituent people along with ethnic Macedonians, an internationally monitored census to determine exactly what percent of the population Albanians make up (officially it's 23 percent; most people say it's about a third of the population; some Albanians say it is as high as 45 percent) and, in this job-scarce country, increasing the number of ethnic Albanians employed in Macedonia's state sector, including the police forces.

Starting this week, Macedonian President Boris Trajkovski has invited all parties represented in the Macedonian parliament to participate in talks meant to address these issues. Powell said he has urged Trajkovski to keep the pedal to the floor in this integration process.

Despite their romantic ideas about the NLA and their real sense of frustration with aspects of life in Macedonia, there is something encouraging that underlies all that Arlinda and Arsim have to say, and that most ethnic Albanians here seem to share. They really do want to be Macedonians. With the exception of a few sidelined extremists, almost all of Macedonia's Albanians say they want more rights within the country.

"If we feel Macedonian," Arsim says, "then Macedonia must start to feel us."