John Ashcroft says the closed-circuit TV broadcast of Timothy McVeigh's execution will help victims heal. But will what they see look too brutal -- or not brutal enough? 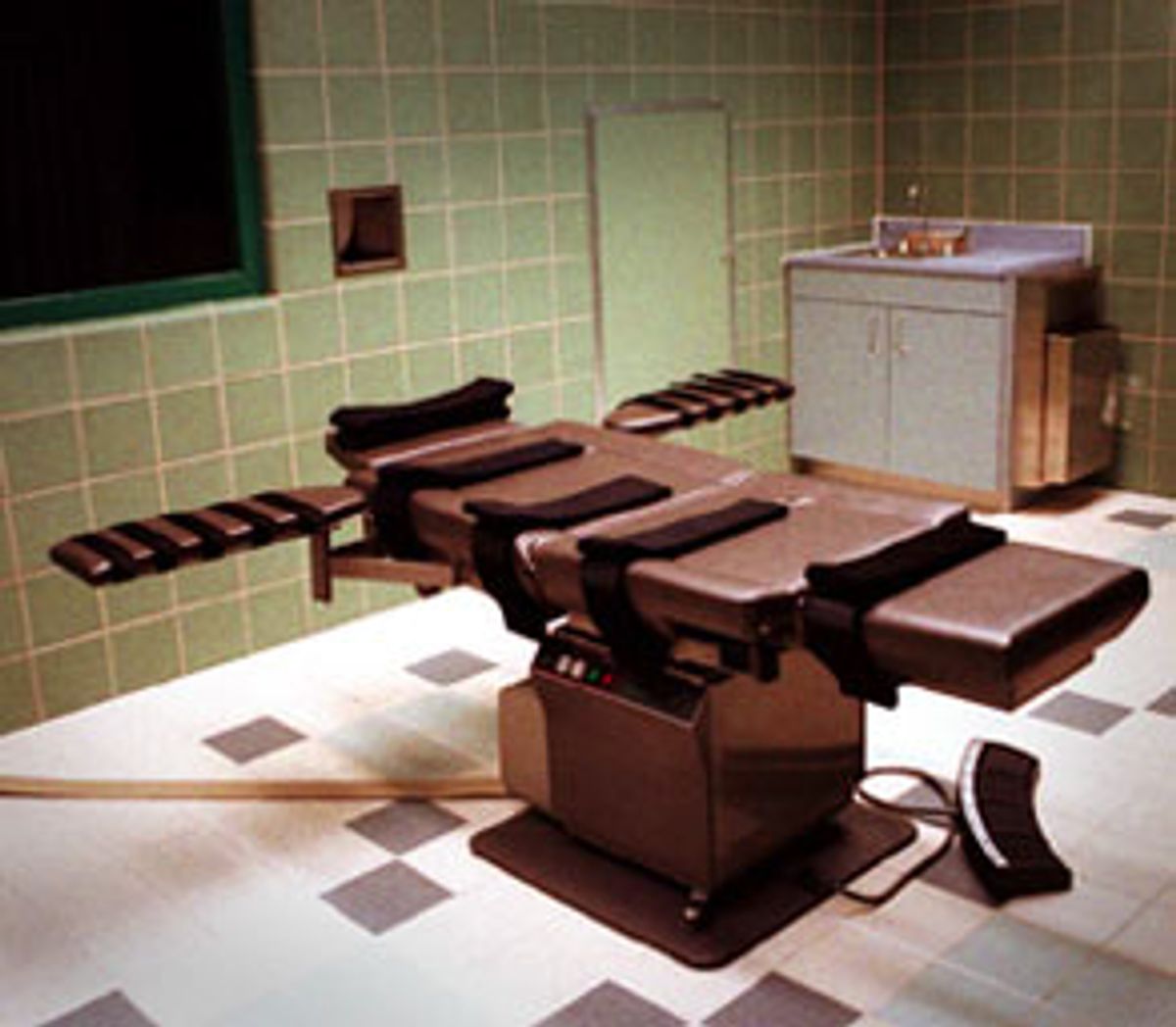 It was a curious moment, on Thursday, when Attorney General John Ashcroft -- demonized by Democrats during his confirmation hearings as a hardhearted politician -- stepped away from his role as our top law enforcement official to play national therapist.

Ashcroft had traveled to Oklahoma City, he told us, to meet with survivors and family members of victims in the 1995 bombing, to "hear their stories and to try to understand their loss." The visit yielded an idea to remedy some of their unimaginable pain: Set up a closed-circuit TV system in Oklahoma City to let them watch the May 16 execution of convicted bomber Timothy McVeigh in Terre Haute, Ind., several hundreds of miles away. The private broadcast, Ashcroft said, "can help them meet their need to close this chapter in their lives."

Ashcroft's speech expressed the popular rationale for letting people witness an execution: It brings "closure" and "emotional healing" to a victim's family and loved ones. Nobody talks about the dark side: the primal desire for revenge and retribution, the catharsis many hope will come through an old-fashioned, eye-for-an-eye punishment that fits the crime.

But while Ashcroft and others insist the closed-circuit telecast of McVeigh's execution won't open the door to more widely broadcast public killings, some experts disagree. "For all practical purposes, the cat is out of the bag," says Austin Sarat, the author of "When the State Kills: Capital Punishment and the American Condition." Executions were public in this country until the 1930s, when states finally sealed them off behind a prison curtain, Sarat says, because of the "emergence of a sort of Victorian sensibility. It was considered unseemly."

Clearly, McVeigh's execution will be the most widely viewed in over a century, with selected bombing victims and representatives from the media (10 of each) watching from the death chamber's front row, and an additional 1,100 qualifying to watch by remote from Oklahoma City. The question now becomes: How will they feel about what they see?

Will it be brutal enough to satisfy the desire for retribution some victims feel? Perhaps not; the relative sterility of lethal injection has had an anticlimactic effect on witnesses who feel that the punishment -- even death -- still doesn't match the crime. In fact, should the modern execution ever make it to TV, the most shocking thing might be its utter banality.

In early January, Judy Busch of Oklahoma City was able to witness the execution of Floyd Allen Medlock, who had killed her 7-year-old granddaughter, Kathy, 10 years earlier. She's glad she went, and strongly believes executions should be televised. "Otherwise it looks like it's something we should be ashamed of," she says.

But she also admits to leaving not fully satisfied. "It was so quick and so sterile and so serene," she says. "It left me feeling angry, I guess."

Medlock's murder of Busch's granddaughter in 1990 was a particularly grisly one. First he tried to choke her to death, and when she regained consciousness, he tried to drown her in the toilet, and then stabbed her to death before molesting her. Her nude body was found the next morning in a trash bin, wrapped in a bedsheet. Judy Busch doesn't have to apologize for wanting to see him suffer badly.

Yet she resists using the word "revenge"; she prefers "retribution." And while she's glad she saw Medlock die, she chooses her words from the same therapy-speak manual Ashcroft culled from, calling the execution a "necessary experience for me to live through to know that chapter is closed."

But clearly it wasn't. The quiet, humane death that Medlock received -- by injection, the same fate McVeigh faces -- was a disappointment, especially when Busch considers "the terror and suffering that Kathy faced when she died."

She had also held out some hope that Medlock might at least finally apologize. "I don't know what I was expecting. But he just said, 'Take it easy.' He didn't look toward us at all, either. He only looked at his father."

Then the injections started. "It just looked like he was sleeping," she says. "He made several little gasps. No jerking. No anything. Then he seemed to change color some, and we knew. I couldn't help but think, why didn't he fight? It's a real disappointment. You want him to hurt."

That's a surprising admission. Few will admit the desire to see the criminal justice system inflict pain. When Gerald Stano, Florida's notorious rapist-murderer, was finally electrocuted in 1998, the twin brother of one of the victims made news by the way he reacted. The moment the electricity jolted Stano, Raymond Neal said, "Die, you monster, die." Afterward, he and his brothers marched outside, where they proceeded to light up cigars and celebrate in front of the throngs of media and anti-death-penalty protesters. "It's a wonderful day," Neal told a reporter at the Florida Times-Union. "I'm the happiest man on the earth today."

But few victims' family members admit to such bloodlust in advance of an execution, or such jubilation when they see it take place. In fact, in the debate over televising McVeigh's execution, hardly anyone cites the desire for bloody revenge among the reasons for viewing it. Which is a little odd: If ever there were a criminal who might trigger a demand for nationally televised biblical vengeance, it's McVeigh. Who can't hate a right-wing gun nut who blows up a government building that contains a day-care center, killing 168 people -- victims he later refers to as "collateral damage" in the book "American Terrorist"?

Yet advocates of televising the execution don't list bloodlust among the reasons they need to watch McVeigh die. Bombing survivor Paul Heath, a psychologist who lobbied for the closed-circuit screening of McVeigh's execution, told the Chicago Tribune that "American Terrorist" brought him "closer to having an emotional need to watch the execution than I ever had before I read the book" -- but he wouldn't use the word "revenge."

Salon columnist Camille Paglia is an exception: "I feel in my gut that any person who inflicts such atrocious physical suffering on so many innocent victims deserves to have a taste of his own medicine," she wrote in 1997. "I wish that every person maimed by McVeigh, or any relative of a person killed by McVeigh, could have at him with a sharp weapon of choice, the aim being to maximize long, lingering pain."

But if McVeigh's killing fails to satisfy his victims' need for either closure or bloodlust, it could well lead to more of us getting to watch. Although Ashcroft insists the closed-circuit broadcast won't set a precedent -- throughout his speech Thursday, the attorney general took pains to describe the bombing as "unique in our American experience," with "many unique elements and ... a unique set of circumstances" -- others think it can't help opening the door to wider viewing of executions, including telecasts.

Proponents of televised execution include an unlikely alliance of death penalty supporters and opponents. Sister Helen Prejean, immortalized in the film "Dead Man Walking," has come out in favor of televising executions, so that the public can see the brutality that's being practiced in their name. Supporters, like poet, essayist and undertaker Thomas Lynch, insist the public has an "unabridged right" to watch McVeigh die. Lynch believes televising his execution could be "a vaccination against madness and inhumanity."

But the vast majority on both sides of the death penalty debate shies away from the issue of televising executions, according to Austin Sarat, a law and political science professor at Amherst College.

"The pro-death penalty side is worried that people will be disgusted if they see an execution," he says. "The anti-death-penalty side worries that it just doesn't show enough," and also fears that televising executions "might fuel the appetite" for them. That potential appetite didn't escape Entertainment News, purveyors of such landmarks as voyeur.com and dudedorm.com.

The company is suing the government for the right to televise McVeigh's execution, and while Sarat "can't imagine that it will succeed," he does think its challenge is on solid legal footing.

"If we talk about execution being a public act, there's really not much of a legal argument from keeping it from the public," Sarat says. "Broadcasting it would not be revealing a state secret, or somehow cause undue harm to the innocent" -- the usual legal standards for keeping the public from viewing a state proceeding.

"I certainly can see why it would offend some sensibilities," he says. "But bad taste is not a good enough reason to keep something from the public."

McVeigh himself supports the idea of televising his own execution -- which provides opponents of broadcasting state killings one more argument: It offers one last chance for notorious criminals like McVeigh to get public attention for their causes and crimes.

"McVeigh has always said he wanted to get back for Waco and Ruby Ridge," says Richard Dieter, executive director of the Death Penalty Information Center. "And now he's getting an audience. It's what he always wanted."

"I hate that it's playing right into his hands," agrees Judy Busch, though she, too, advocates televised executions.

Increasing attention for McVeigh was also a concern of Ashcroft's, who is restricting media interviews with the convict to 15 minutes a day until he is executed. "As an American who cares about our culture," he said, "I want to restrict a mass murderer's access to the public podium."

But he's just a few short weeks away from giving McVeigh a bigger megaphone than he ever dreamed of. The convicted bomber has said he'll simply quote from William Henley's poem "Invictus," which reads:

I am the master of my fate: I am the captain of my soul.

Paul Heath, the Oklahoma City survivor who was the primary advocate for the closed-circuit telecast, doesn't worry about McVeigh using his final platform as a way to advance his agenda or further upset victims and their families: "I think that's ludicrous."

Heath thinks people who attend the telecast will be disappointed if they're expecting either an apology or an explanation from McVeigh for his actions. But he thinks they will be able to come away with some peace, and "attest to the fact that he's gone, and will not ever be able to escape or get out from some frivolous appeal."

And he has a surprising amount of faith in an icon of irrational hate and narcissism. "I'm not worried he's going to say anything harmful to anyone," Heath says.

Let's hope so. Because either way, McVeigh will be holding all the cards until the very end.