Don't go near the water

Jeb Bush's controversial plan to dump wastewater near drinking wells may be his big brother's next environmental mess. 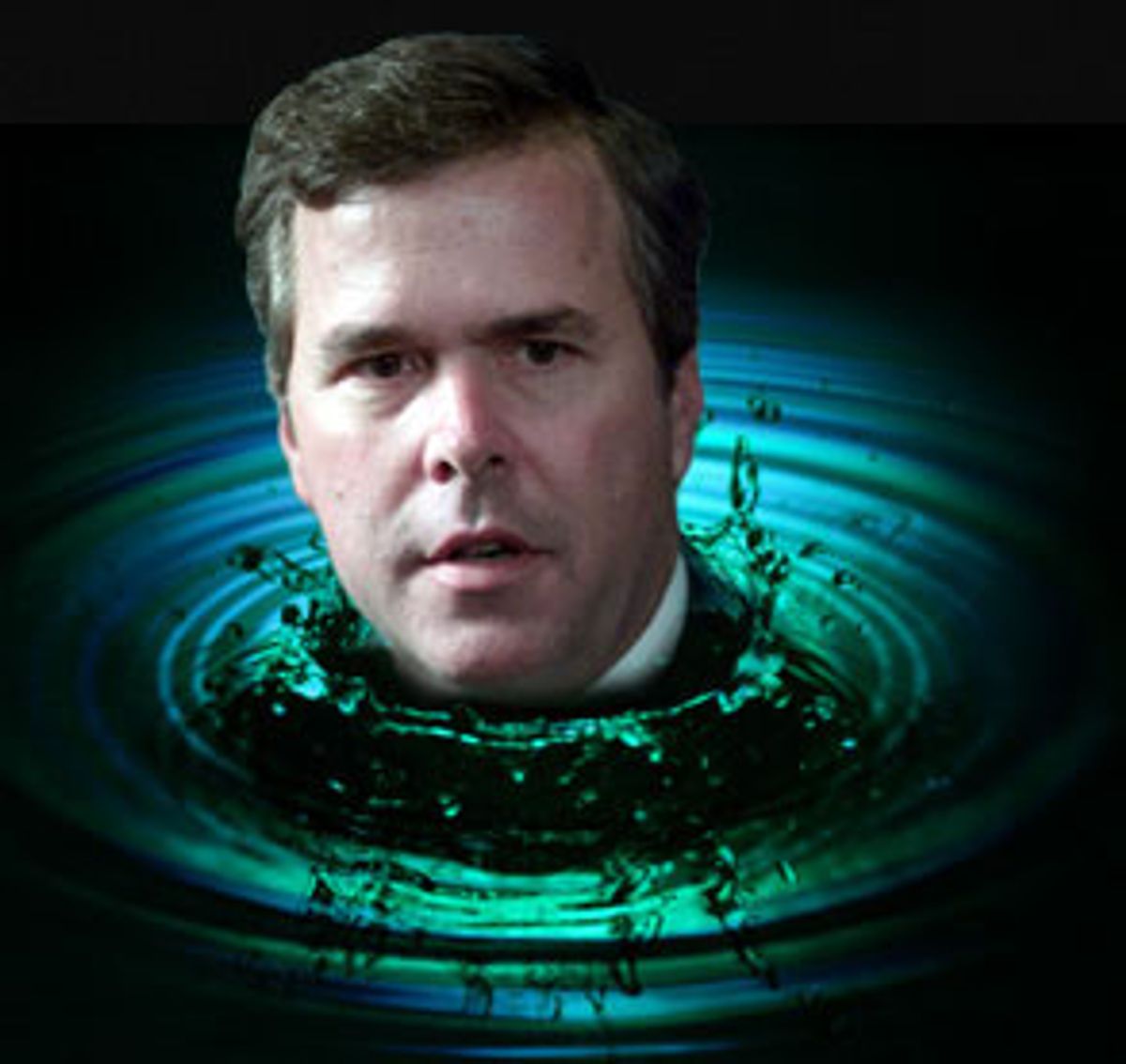 For months now, beginning with the 2000 election recount fiasco, Florida Democrats have been complaining that Gov. Jeb Bush and his brother, the president, have been figuratively feeding the whole state a line of fecal matter.

A debate raging in Tallahassee, Fla., provides them with some tangible evidence -- of a less figurative nature -- of that charge, and critics say it could develop into the next national environmental issue President Bush is forced to confront.

In the past few weeks, Gov. Bush has been pushing hard for a controversial bill that would allow Florida water utilities to inject untreated water -- containing human and animal waste -- into underground water zones, or aquifers, which are near wells where drinking water is stored. The bill is expected to be signed by Bush in the coming weeks, after which his older brother's administration will have to rule on the matter. At that point, national environmental groups say, it could become another political problem for the president.

The debate, little noticed outside Florida, comes at an awkward time for the Bush brothers as the nation approaches the 31st anniversary of Earth Day. As reported in Wednesday's USA Today, in a rare moment of greenness, Jeb Bush is butting heads with Gale Norton, his brother's secretary of the interior, over the White House's plans to auction off 6 million acres of seabed in Florida (and also Alabama, Mississippi and Louisiana) to oil and gas companies.

In broader terms, President Bush has been facing harsh criticism from the environmental community -- criticisms that seem to have taken hold in the zeitgeist. With poll numbers indicating that Americans, by a ratio of 2-to-1, think the Bush White House favors the interests of corporations over those of the American people, congressional Republicans met with Vice President Dick Cheney on April 4 to beseech the White House to work on correcting its anti-environment image.

These complaints follow Bush's broken campaign promise that he would work to reduce CO2 emissions, his stated desire to permit oil exploration on environmentally protected land in Alaska and his reversal of a last-minute executive order by then President Clinton that would have reduced the amount of arsenic permitted in drinking water.

In a rather obvious attempt to combat these impressions, on Monday Environmental Protection Agency head Christine Todd Whitman announced that the Bush administration would not rescind a Clinton executive order protecting wetlands. On Tuesday Whitman came before the White House press corps to personally announce that the Bush administration would also not rescind a Clinton executive order expanding the disclosure requirements for companies that pump lead emissions into the environment.

That might be a short-term help once people learn of Jeb Bush's move to inject feces- and bacteria-laden water near drinking wells. The imagery could not be worse. And the story won't improve if it moves from the Jeb-dominated island of Tallasleazy to the late-night world of the political sound bite.

The move would save the state up to $400 million, proponents say, and would enable it to continue on schedule with its Everglades restoration program by allowing the state to pump this stored water through the Everglades during the dry season.

Such a move is unprecedented, critics counter, and the presence of bacteria in the region of the drinking water supply could put the population at risk. The untreated water would supposedly stay separate from the aquifer's drinking water supplies, which belong to homeowners or utilities. But, they ask, what happens if there's leakage?

"The water that would be injected, by definition, does contain human and animal waste," says Suzi Ruhl, president of the Legal Environmental Assistance Foundation, or LEAF. "And that would mean not just fecal bacteria, but viruses and protozoa like giardia and cryptosporidium, which can cause serious illness and even death in humans."

But Towson Fraser, a spokesman for Florida House Majority Leader Mike Fasano, argues that steps are being taken that would prevent any contaminants from entering the drinking water. The bill would require a buffer zone between the untreated water and the stored water, as well as monitoring of the wells by the EPA.

"There's a lot of misinformation out there," counters Geof Mansfield, senior water analyst for the Jeb Bush-run Florida Department of Environmental Protection. "A lot of people are decrying this as if, willy-nilly, pollutants and contaminants will be injected into our groundwater. But this has all been designed in a way to protect human health and preserve the quality of our groundwater."

This makes Alan Farago, co-chairwoman of the Florida chapter of the Sierra Club, laugh. "The same agencies that are telling us not to worry are the ones that told us that, here in Miami, trillions of gallons of untreated municipal wastewater was supposed to stay underground 300 years, when it's bubbling up to the surface right now. These same agencies ruined the Everglades. These are the same people telling us that it will be OK if our water quality standards are lowered."

Everything about this bill is in dispute. No one can even agree how the whole thing started. Mansfield says the bill is part of Jeb Bush's search for long-term solutions to the state's pressing water needs, though he does admit that the bill is unique to Florida.

"It's hard to know exactly what's behind it," counters Frankel. "Whether it's really new science or just an administration that is so intent on tax cutting that they're willing to take these kinds of risks. [Jeb] Bush is on a tax-cutting tear. But we're having terrible trouble with our budget -- we have a billion-dollar shortfall this year, and his administration is looking every which way to try to save money."

Environmentalists say that the bill would necessitate a waiver from the EPA, as federal drinking water laws require that any water pumped into the ground be treated to meet the same standards for drinking water. But Gov. Bush's administration disagrees, arguing that the Safe Drinking Water Act does not make any such requirement, and that the bill would not require an EPA waiver.

"The federal Safe Drinking Water Act requires that water injected not endanger public health or endanger underground sources of drinking water," says Mansfield. The bill will not violate that law, he says, and the EPA has indicated to his department that the bill is "not inconsistent" with Safe Drinking Water Act standards, though it has not officially ruled so. An incarnation of the bill in the last legislative session was met with EPA "concerns," Mansfield says.

The EPA has yet to make a decision on the matter, said spokesman Wesley Lambert, because the legislation is still pending. If and when Gov. Bush signs the bill, EPA attorneys will review the law and take it from there, he said.

"Jeb is not just twisting arms, he's breaking arms over this issue," LEAF's Ruhl says. "Republicans like Maygarden have been told by their leadership that if they spoke out against the bill, their bills would never see the light of day." During floor debate on Monday, no Republican spoke against the bill (though a few did vote against it). Maygarden did not return a call for comment.

After next week's state Senate vote -- and Jeb's John Hancock -- big brother George will then step up to the plate. Whitman and the EPA will have to review the law. That alone could be controversial, especially if the law is found to be in violation of the Safe Drinking Water Act. If that were to happen, Whitman would have to decide whether to grant the Sunshine State a waiver.

In a letter to the president earlier in the year, Jeb Bush had raised the subject and expressed his hope that his brother's administration would have "a willingness to abandon conventional processes as long as the environmental results are achieved."

As always with these Florida environmental issues, bubbling beneath the surface is the issue of growth. House GOP spokesman Fraser says that the environmentalists really have another concern altogether. The bill "will enable more development to occur," Fraser says. "They want to stop development."

Local Sierra Club honcho Farago says that development is, indeed, something of an issue here. (At last! Agreement!)

"Governor Bush is very anxious to divest authority from state agencies to local jurisdictions," Farago says. "And this fight over the drinking water may be the clearest example of how the public health standards will be lowered by this political philosophy, the idea that authority needs to be shifted from a central government agency to local jurisdictions."

Utilities, Farago explains, respond to county commissioners, who respond to campaign contributors, who are often in construction and development. "And these guys want cheap growth," he says.

On Thursday, LEAF and the Florida chapter of the Sierra Club are scheduled to hold a press conference to protest the bill, and the national legislative director of the Sierra Club, Debbie Sease, says that she is monitoring the situation closely. If the bill continues to go forward, Sease says that she fully expects the Sierra Club to make a national issue of the matter. "The idea that in Florida you could have a lesser standard for drinking water than they have in some third world countries is incredible," Sease says.