"The Center of the World" 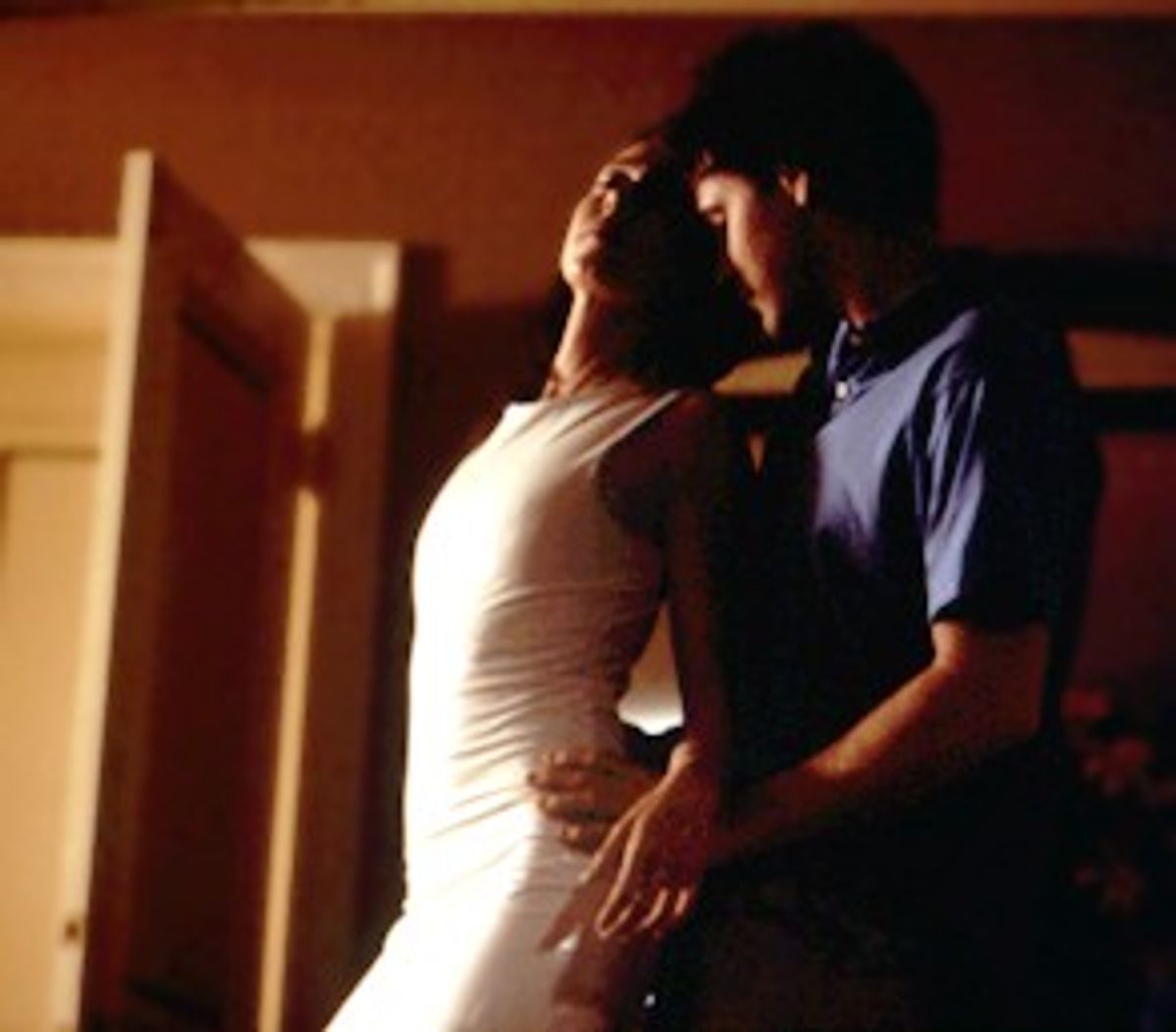 You've got to give Wayne Wang credit: He nailed the geek details.

Within the first few minutes of "The Center of the World," the director captures a consummate geek moment: Richard (played by Peter Sarsgaard), a successful programmer, meets a cute drummer at a cafe and immediately offers Net-savvy advice. "You should get some MP3 files together," he earnestly tells her, his cellphone ringing in the background. "It's the right way for new bands to be heard." Napster's Shawn Fanning would be proud.

"The Center of the World" may be the first mainstream movie to seize the essence of geek life at the turn of the century -- from IPOs to online porn -- without collapsing into caricature. Filmed using a digital camera, and featuring a lonely programmer entrepreneur as a protagonist, "Center of the World" serves as a neat little study of the ascendant species of geek. This doesn't mean that techies come off looking rosy, though: "The Center of the World" is ultimately a warning about the isolation of life behind the monitor, casting a concerned eye at the troublesome sex lives of geeks. Richard may believe that "the thing about computers is that you're kind of connected to everybody and everything, it's like you're at the center of the world"; but in Wang's film, the final message is that geeks are connecting to nothing at all.

Richard is a socially awkward hotshot programmer in his early 20s; his company is days away from a public offering and he's already worth millions. He meets Florence (Molly Parker), a hipster drummer who pays the bills by stripping at the upscale club Pandora's Box, and offers her $10,000 to spend three days with him in Las Vegas. She agrees, though only on her own strict terms: no kissing on the mouth, no penetration, and she wants her own room.

Sound familiar? It should be: Essentially, "The Center of the World" is "Pretty Woman" with a geek and a stripper, but minus the maudlin garbage and happy Hollywood ending. Just like in "Pretty Woman," our protagonist falls for his hired date and she discovers that she has feelings for him too; one by one, Florence's "rules" are broken and their neat little business arrangement turns into an emotional disaster.

The subtext of the story is that both the geek and the stripper are so wrapped up in their own isolation that they can't really connect. Richard is so lonely and cut off from female companionship that the only way he knows how to relate to a woman is by offering to pay for the attentions of a stripper; Florence tries to live behind her seductive mask and in doing so cuts herself off from any real human connection.

But it's a big leap from this fact to the larger assumption that geeks are too involved in this virtual world to be capable of real human interaction. The world loves to believe that geeks never get laid, discussing their mating habits as if they were exotic animals in a human zoo. Wang may have the details of geek life circa 1999 down pat, but his condemnation of the computer as a font of loneliness and alienation doesn't quite ring true.

Wang lives in the San Francisco Bay Area, and according to the movie's production notes he spent time with local geeks soaking in their everyday habits. To a certain extent, he got it. He nails the jingoistic lingo of the technology boom (although in 2001 all this talk of IPOs "going through the roof" and "B2B concepts" and "ad-supported business models" seems sadly nostalgic). He even features the Silicon Alley Reporter's charismatic founder, Jason McCabe Calacanis, in a small part as Richard's partner, Pete. And the dialogue reads like a diary of life in 1999; for example, when Pete admonishes Richard: "You own 18 percent of the company, you know how much money that is? That's not courtside seats; that's buying the fucking NBA team. And you're sitting at home jerking off watching porn? Dude, I've got a hundred engineers at MIT that would take your place in a minute."

But when he gets into the thornier subject of sex, Wang's assumptions about the geek life are a bit more problematic.

Wang's conflation of geeks and strippers is not far from the mark: Besides hosting Silicon Valley, the Bay Area has long been home to the sexually deviant, welcoming upscale strip bars like the Mitchell Brothers', prominent S/M clubs and famous dominatrixes (not to mention the gay sex scene). And there has always been a certain demographic of geek whose sexual tastes run toward the kinky or pornographic; the anonymity of the Net, after all, makes it easy to find subcultures of sex and fuel fantasies you never knew you had. Cross this with a grueling Internet industry that demands every spare minute from its programming minions, and it's not surprising so many assume that the only sex geeks get is by paying for it -- online, or in strip clubs.

Programmers have become a new kind of superstar, so it's no wonder that the sex lives of geeks are a source of morbid fascination for so many, spawning an endless "do they or don't they get any?" debate. When a prominent singles convention relocated from Alaska to Santa Clara, Calif. -- presumably because there were suddenly more single men in Silicon Valley than in any other county in America -- the media had a field day; in fact, there were more media at the conference than there were lonely hearts. Harper's Bazaar devoted vicious coverage to the misfit insta-millionaires and the gold-digging gals who pursue them. Women.com features programmers and entrepreneurs in its "Most Eligible Bachelors of Silicon Valley" with the caveat that you might never see them, because they work 80-hour weeks.

But it's too easy to jump from these examples to the conclusion that life behind a monitor means a total disconnect from relationships; the truth is that there's little more than anecdotal evidence to prove that geeks boast dramatically different sex lives than any other demographic. Taken as fiction, Wang's parable about his characters' inability to connect is stirring, if a bit trite; and, of course, there are plenty of titillating sex scenes, including a memorable one with a lollipop. But "The Center of the World" reeks vaguely of a lecture about the dangers of technology, especially as the final disconnected voiceover whispers, as Richard sleeps under his desk, "You don't need to open Eudora. You don't need to leave. You create a frontier to put your mattress with the cables and the CPUs and you claim a piece of space. The world breaks in waves at your fingertips. You make those choices. You decide. And it sings for you when you ask."

Wang appears to blame computers for Richard's isolation illness; he judges the computer as the cause rather than seeing it as a symptom. He seems to be saying that it's so easy to reach out and grab the wonders of the Net -- the video games, the porn, the distanced communication of e-mail -- that when faced with actual human contact most techies cannot compute. Sure, there are plenty of examples of geeks who don't get laid, who spend their lives consumed by work and connect with the outside world only through the mediated medium of bits and bytes -- or, perhaps, by paying a stripper for a lap dance. But that's too easy. Is the computer really at fault? Maybe connecting, in the real world, is just really hard to do.