My harem of elegant ghosts 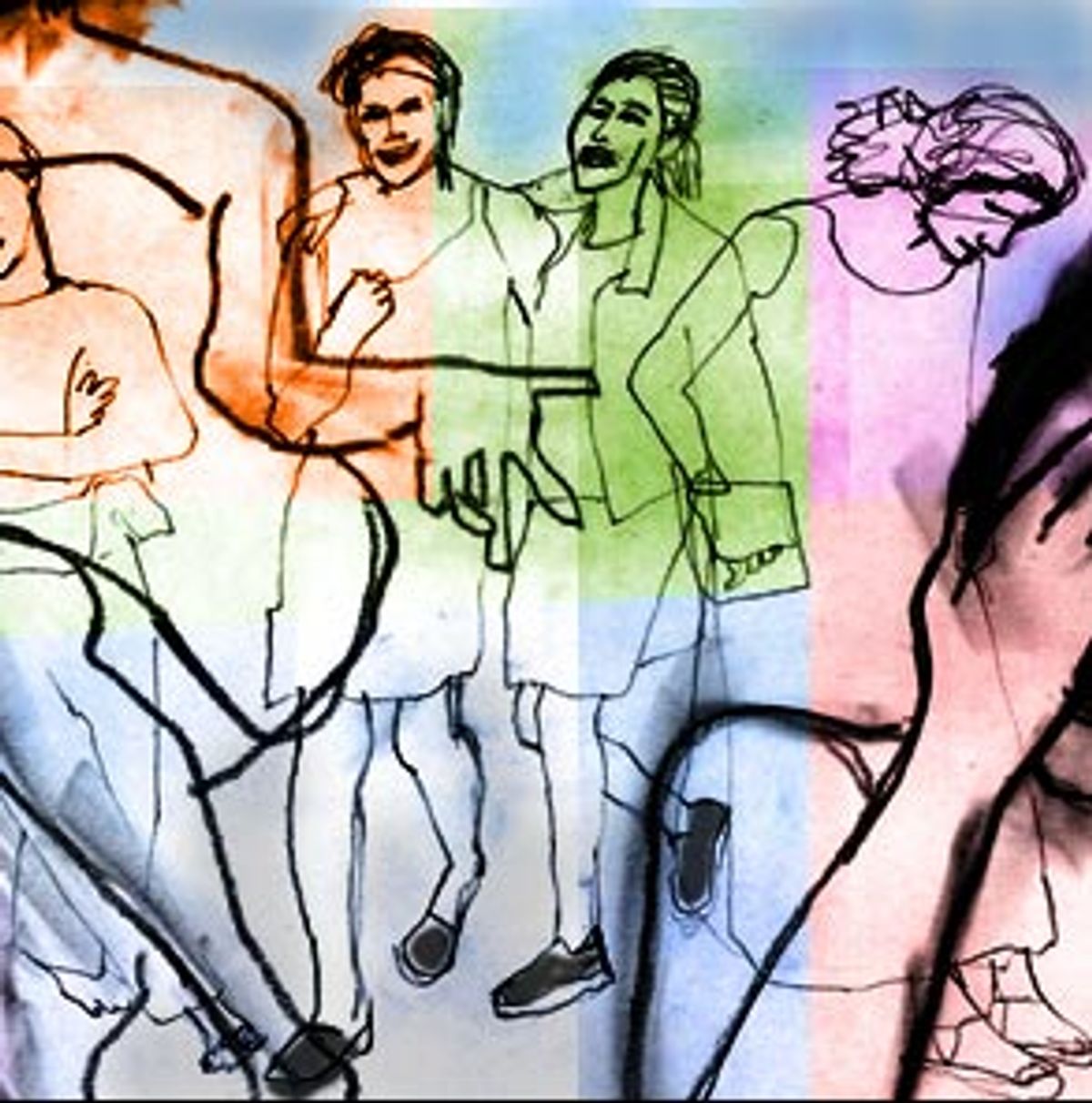 Our house is visited by gorgeous ghosts.

They are not ghosts in any morbid sense. These are very much alive. They are professional women in their 40s, all single. They are ghosts in the sense that they are unresolved souls. They are women in limbo, detached from the Sturm und Drang of partner relationships: mysterious, otherworldly and utterly fascinating; desirable, yes, but untouchable (though they admit to a longing to be touched).

Sometimes, when they look at me from some distracted inner part of themselves, they send a shiver down my spine. Spooky. If I were a dog, I'd bark at them.

Single, 40-plus women are a growing phenomenon in our lives. We used to count just one among our friends. Now we have seven. Some have children; some are childless. Either way, they seem to like coming here. They relax in the informal atmosphere of our chaotic conjugality. They turn up with bottles of wine; they eat, gossip, chew over problems, then fall asleep. That's the pattern of our evenings.

On high days and birthdays, when they overdo the wine and I crank up the stereo, I get to dance with one, or even two, of them, but that's as far as my specifically male contribution to their lives goes, apart from maybe carrying their sleeping children to their cars at 2 a.m.

They are clever and funny, and they're all attractive. They may have lost the bloom of youth, but they are at an age of easy elegance. They no longer strive to impress. They know what suits them. Looking good is simply a reflex. To me they seem a delicious mix of experience and potential. Yet though they may be more desirable than they have ever been before, they are far less approachable. Single men are frightened of them.

Every now and then we tell them to go out and grab a man: Get a life. This is hardly provocative; they tell themselves to do the same thing. They resolve to do it. They don't. They already have a life, actually. A very nice life. That's part of the problem.

In all seven cases, and in widely differing ways, they are women of substantial achievement. They produce TV programs, run university departments, hire and fire, travel the world. Their professionalism extends into their lifestyle choices, which are ruthlessly discriminating. They have the right mobile phone, the right car, the right house and the right furnishings, each item laboriously selected out of millions of possibilities. In restaurants, if their meal does not delight them, they send it back. One of the seven once left her cinema seat to demand that the projectionist turn down the sound.

They are not pushovers. They are so used to having exactly what they want, in the size, shape, color and vintage they want, that they have become very fussy about men. Gone is the impetuous passion of their youth. Yet they know in their hearts that marriages are not made in the satisfactory fulfillment of some detailed checklist. They are made in reckless, spur-of-the-moment decisions, followed by years of trying to match unsympathetic elements until some magical symbiosis is achieved. Or not.

In any case, single men of their age are hard to find. This is odd considering they are supposed to be in surplus. They are certainly keeping a low profile. Occasionally one of my women will ask me to track one down for her. I follow the footsteps of these men to lonely pubs, corner them at the bar and weave dreamy images of my seven gorgeous spirits. It makes them depressed. "What a cruel waste of vaginas," one of them said, mournfully.

Once I invited a single man to dinner and I sat him next to one of the seven. They got on like a house on fire, sharing a passion for François Truffaut and the wines of Alsace. But did he fling back the rug and call for hot Latin music? No he didn't. Did he insist she leave her BMW at my house and drive her home in his Kia? No he didn't. He slunk home early with a sudden headache, claiming a heavy day ahead.

Sadly, men don't see these women's elegant autonomy as a come-on. They see it as a problem. They run away. Yet if men don't do the chasing, nobody will, because though my women have overturned every other traditional role pattern, they still expect to be pursued. They see it as their birthright. They are baffled that they are not, but they carry on looking lovely anyway, being fantastic, being there. To no avail.

A man in their position, with their power, might go for a docile partner, someone he doesn't have to compete with. But they aren't interested in docile men. Women haven't changed that much. They still fantasize about a man who will sweep them off their feet. They fancy something hard between the sheets.

Neither do men know the subtle skills of insinuating themselves into a powerful person's life. They take one look at my seven women, with their magazine-perfect homes, and they think: "Where would I put my racing bicycle? My electric guitar that I play only when I'm drunk?"

Getting her into bed might be the easy bit. The hard bit would be telling a woman who has ordered a cinema projectionist to turn down the sound that you think your Captain Beefheart album collection would look fine on her minimalist zinc shelf.

One of these seven women has a house rule forbidding anyone to enter her sitting room with shoes on. And she's got two children! How those kids are going to turn out without the sensible influence of a man, God only knows.

The one thing the years have managed to take from these women is their spontaneity. They no longer lift up their skirts and fly, as they were urged to do in the '60s -- not without knowing the destination first, anyway. They're old enough to have been messed about before and they don't intend to be messed about again. So they rewrite the partner job description, inserting tougher clauses and, in the meantime, sink their passions into redesigning their bathrooms. There isn't a man alive who wouldn't compromise their lifestyles.

In our house, though, they can relax their standards. They don't have to be on their mettle here. We've compromised already, so they can keep their shoes on or kick them off, as the whim takes them. Some nights we have two or three of them here. There's nothing they like better than coming around to watch a video they've been dying to see. Within 10 minutes, they're asleep. Ghosts.

Sometimes I stop the film, make coffee and wake them -- very gently, or they might tell me off. Then they demand that I précis the hour that they've missed. Or they deny they've been asleep at all.

"I can't understand what the critics saw in this film," one of them always says.

"They saw it," I tell her. "In their waking hours probably."

"Film critics watch the film with their eyes open -- trick of the trade."

My wife doesn't share this need to sleep with others (we do it every night), but sometimes she becomes infected and drops off too. At times I have been alone in the room with three sleeping women, arrayed across sofas like lions of the Serengeti that have eaten too much wildebeest. This makes me feel lonely. At such times I might just as well be a sad single man -- the only difference being that he might wish he had three lovely women in the room with him, whereas I have them, all making gentle prrpwah noises with their lovely lips.

I am very fond of my ghosts, particularly now that I'm losing one of them. She suddenly declared that she has "got a life" (as we so glibly put it). And it's my fault. I had suggested to one of my single male friends that he take her out. To my surprise, he did. Now she's not ghostlike at all. She's pregnant. She has traded in the enchanted, dissatisfied spirit world for the contentment and stress that are the family woman's dual lot.

I don't know what she sees in him. I mean, he's my friend and all that, but how can she bear to have his horrible bicycle in her hallway?

Martin Plimmer is a London-based journalist and radio broadcaster working for a variety of media, from BBC Radio 4 to the Daily Express and Independent newspapers. His book, "Family Life," will be published in the spring.