The execution will not be webcast 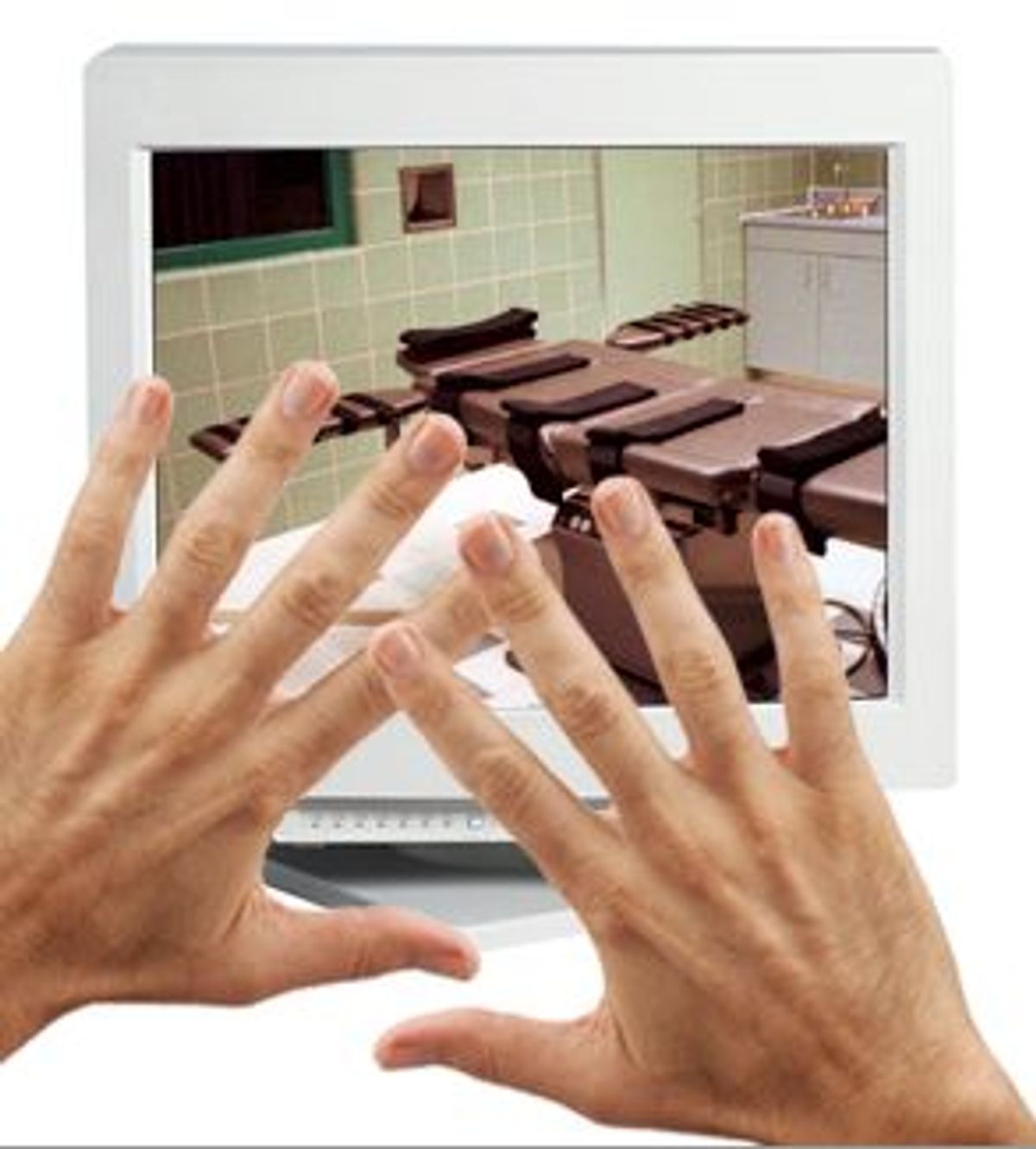 On May 16th, Timothy McVeigh will be taken into a room with a one-way mirror at the U.S. Penitentiary in Terre Haute, Ind. Strapped down onto a gurney, arms outstretched, McVeigh will watch as prison technicians insert a catheter into each of his arms. After a brief injection of saline solution, they will begin to give him a series of lethal injections. The first -- a muscle relaxant, sodium thiopental -- will protect McVeigh from the pain of death; the second two -- pancuronium bromide, which will stop his breathing, and potassium chloride, which will induce cardiac arrest -- will kill him.

David Marshlack, CEO of Entertainment Network, Inc. thinks that you should be able to watch the execution pay-per-view, right from your computer. In a special one-time-only theatre-of-death spectacular, Marshlack wants to sell you the Oklahoma City bomber's last minutes for the low, low price of $1.95 (all of which will be donated to charities benefiting the bombing's victims). And we thought the Net couldn't get any sleazier than Rotten.com.

Whether the scheme is a shameless publicity stunt or a well-intentioned charitable fundraiser, the court's not having it: On Wednesday, Indiana U.S. District Court Judge John Tinder nixed this latest stab at charging for Web content. The case of Entertainment Network, Inc. vs. Lappin et al. is so ethically thorny that it inspired Judge Tinder to wax philosophical in his opinion: "The relief sought in this case is the logical extension of Marshall McLuhan's prophetic proposal from the 1960s that the 'medium is the message.'"

And if there were ever a time to resurrect McLuhan, this is it: What's in question here isn't the execution itself, or the public's right to hear about it; it's about the means by which the story is to be told; what some say is our constitutional right to watch the execution, rather than just read about it.

The judge denied Entertainment Network the right to broadcast the McVeigh execution, citing "penological interests" -- in other words prison security. Judge Tinder upheld arguments put forth by Warden Harley Lappin and the Bureau of Prisons that if Entertainment Network is allowed to webcast the lethal injection, "the inmates may well see the execution as 'sport' which dehumanizes them ... When inmates feel that they are dehumanized or devalued as persons, agitation amongst the inmates is frequently fomented, which in turn can lead to prison disturbances ... ."

But the threat of prison riots hasn't convinced Marshlack to drop his case. "I know that we will be appealing by tomorrow. I don't know whether we'll appeal to the Supreme Court directly, or to the Seventh Circuit Appeals."

If Entertainment Network Inc. vs. Lappin et al makes it to the Supreme Court, it will be a red-letter day for soft-porn purveyors everywhere. Marshlack's Tampa, Fla., company is best known for broadcasting scantily-clad bikini girls and beefcake boys on sites like VoyeurDorm and DudeDorm.

But Marshlack says he isn't just looking to broaden his company's offerings from sex to death. "We're not making any money on this. It's what we believe. We believe in the First Amendment."

The McVeigh execution has reignited debate about the moral implications of who should be allowed to witness an execution. By law, executions are attended by a handful of witnesses and journalists. But when Attorney General John Ashcroft announced last week that McVeigh's death by lethal injection would be broadcast on closed-circuit television to about 250 relatives of victims of the Oklahoma bombing, it begged the question: Why stop there?

Just as Ashcroft said he hoped that closed-circuit telecast of the execution might bring "closure" to the victims' families, the CEO of Entertainment Network maintains that such closure is all of ours to have. "Because this was a crime against the American citizens as a whole," says Marshlack, "we believe that we should have the right to see this."

The Bureau of Prisons, which originally denied Entertainment Network's request, maintained that the government's interests in "not sensationalizing the event, maintaining prison security and good order, and respecting the privacy interests of the condemned individual," supersede Marshlack's First Amendment argument.

For a company called Entertainment Networks to maintain that webcasting an execution is not entertainment may seem like a losing proposition. But Derek Newman, an attorney for the company, says that the camera is a better medium for a straightforward, unsensationalized documentation of events than the pen and paper of any reporter. "If the government undertakes a solemn execution, the unbiased camera will capture that solemn execution," says Newman. "Whereas the print reporters can put whatever spin they want." Newman contends that arguments over sensationalism are really a smokescreen for the deeper question of whether or not Americans have a right to see McVeigh die: "I think that some people are turned off by the idea of broadcasting the execution, but if they think about it, what they're really objecting to is the idea of killing itself. Those who favor the death penalty wish to kill a human being, but they want to keep it behind closed doors."

These battles have been fought before and the courts have consistently denied requests by TV reporters to bring cameras into execution chambers. What makes this case different is the Internet.

One argument against televising executions has been the very real fear that children will accidentally witness a prisoner being put to death. But Entertainment Network's plan to charge a $1.95 credit card fee means that kids are less likely to be accidentally exposed. Even if you assume that some bloodthirsty adolescents will find a way to see it, the pay-per-view method weakens this protect-the-children argument, because it creates a barrier. "If you have to call in with a credit card number, then you're likely not a kid," says Mike Godwin, a First Amendment lawyer who is a policy Fellow at the Center for Democracy and Technology.

As for the Bureau of Prisons' appeal to McVeigh's right to privacy in his final moments, it seems irrelevant in this case since McVeigh has publicly declared his desire to die on camera with the whole world watching. "McVeigh has waived his privacy rights -- to the extent that he still has them, being a federal prisoner -- so even his interests are not compromised," says Godwin. "The fact is that putting people to death is disturbing. And that's why the government doesn't want to show it to you."

Maybe the government wants to avoid showing what death by capital punishment really looks like -- or maybe it's seeking to avoid the very real possibility that McVeigh's execution will transform the bomber into the political martyr he aspires to be. But as far as Entertainment Network is concerned, neither issue is relevant to what's essentially a First Amendment issue.

Judge Tinder disagrees. "Whatever First Amendment protection exists for viewing executions" read Tinder's ruling, "it is not violated by the BOP's [Bureau of Prisons] explicit regulation against recording or broadcasting them to the public."

As for Marshlack's appeal, even those who are sympathetic to Entertainment Network's First Amendment arguments doubt that the courts will allow the Web company to bring the Oklahoma City bomber's death to the masses.

Says Godwin, "Given the strong tradition of not broadcasting execution, a court is going to think pretty long and hard before it decides to let anyone in to broadcast it."

Live-action execution on your monitor will have to wait.