In Tehran, it's frowned upon for women to smoke in public or even walk alone on the street. A beautiful Iranian film tells their story. 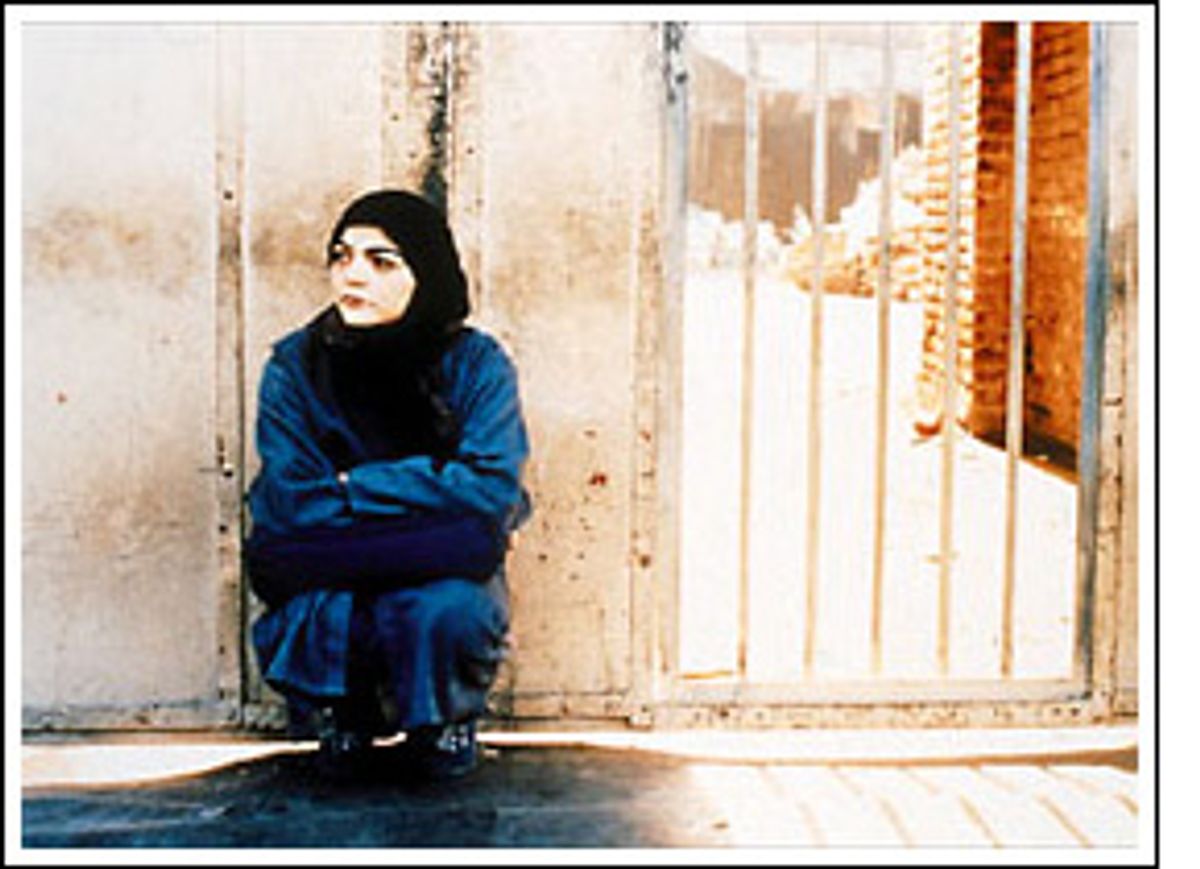 It's not surprising that "The Circle," Jafar Panahi's resonant, beautifully made picture, was banned in the director's native Iran. The Iranian government is notorious for restricting filmmakers, and a movie like Panahi's that shows women smoking and being independent is undoubtedly an easy target.

But Panahi's picture is valuable and interesting beyond its inherent politics. (He has said in interviews that it's not intended to be a political movie.) "The Circle" succeeds on its own terms, both as an involving story about a small group of women who have just been released from prison and as a wondrous meditation on the unspoken communication that sometimes passes between members of the same sex. In this case, the characters happen to be women, although what makes Panahi's picture feel feminist isn't his focus on female characters -- it's more that he connects with them as a humanist. Their sex is significant because it limits what they can do and say in the society depicted in the movie, but beyond that, it's not the central issue.

What does matter to Panahi is the women's suffering -- not an overt, handwringing kind of suffering but the enduring, wearying sort that radiates from the bones out. "The Circle" (its screenplay was written by Kambozia Partovi, from an idea by Panahi) is a sliding narrative that loops easily from story to story. You never learn quite enough about one character before another is introduced, but that approach, instead of being alienating, makes the picture feel more vital and alive. Panahi has carefully chosen what to reveal about each character, but his decisions seem transparent instead of weighty. His movie is like a winding corridor with hidden rooms and unexpected detours; it's our curiosity about these women that pulls us through.

"The Circle" opens with an incident that could be metaphorically heavy-handed if it weren't handled so fleetingly. In a hospital waiting room, a nurse tells an elderly woman that her daughter has given birth to a girl. The older woman absorbs the information, waits a few seconds and then asks a second nurse about the baby. When she's told again that it's a girl, she explains that her in-laws will disown her daughter. The ultrasound said that the baby would be a boy; a girl would be nothing but a disappointment to them, an unfortunate mistake.

Immediately the story shifts to two other women who are frantically trying to make an important call from a phone booth on the streets of Tehran. Arezou (Mariam Palvin Almani) and Nargess (Nargess Mamizadeh) have just been released from prison -- we never learn their crimes -- and are scrambling to make some sort of plan. Nargess is anxious to return to the idyllic country town of her childhood. Arezou's intentions aren't clear. Her chief goals for the moment are helping Nargess get away and finding a way to sneak a cigarette. (The suggestion is that women are not allowed to smoke in public, and they can't even walk down a street alone without having men leer at them and make suggestive comments. At one point Nargess, trying to buy a bus ticket, is told by the male ticket seller that unless she can present a student ID, she isn't allowed to travel by herself.)

After Nargess and Arezou become separated, Nargess tries to find another former prisoner, Pari (Fereshteh Sadr Orfani), also released that day. The two just miss each other. Pari escapes from her family home, where her brothers have threatened her, ostensibly hoping to scare some docility into her. She needs help, and she seeks it from another former prisoner, Elham (Elham Saboktakin), who is now married to a respectable doctor who doesn't know about her past. She refuses to help Pari, who then wanders the streets, uncertain what to do.

There's no complicated plot in "The Circle," or even much of a plot at all, but the picture is so dramatically textured that you feel something's happening every minute. Other women become drawn into the story's orbit: a desperate mother (Fatemeh Naghavi) who thinks she needs to abandon her child for the girl's own welfare, and a prostitute (Mojhan Faramarzi) whose tough-girl eyes and bee-stung lips stand as a defiant affront to the humility that her culture expects of women.

"The Circle" is visually clear and bright. Pahani didn't make the mistake of going for the dirty-dishwater look as a tone-setting device. Instead, the crispness of the film sets off Panahi's performers beautifully. Their faces -- from Mamizadeh's open, hopeful, subtly sensual one to Orfani's, which has a mournful, Anna Magnani-like gorgeousness -- are always the focus. Only two of the actors here, Orfani and Naghavi, are professionals, but every performance is natural and unforced. Panahi has said that he's more concerned with getting the right people than he is with the issue of whether or not they're trained, and he makes the approach work.

This is Panahi's third film. Previously, he served as assistant director to Abbas Kiarostami on "Through the Olive Trees." But Panahi's style of filmmaking is very different from Kiarostami's. Even the quietest moments in this movie have a thrumming sense of urgency. Kiorastami tends to concentrate on gentle layering to build a story; Panahi seems much more interested in finding different ways to sustain dramatic tension. On its surface "The Circle" is an austere, modest picture, yet there's a halo of energy buzzing about it. Panahi uses long, languorous takes for certain scenes, and yet they never drag. His camera, gliding smoothly, both creates and follows movement; more than just reading the characters, it practically breathes with them.

Panahi isn't particularly interested in rich visual details -- the women's faces were what lingered most in my mind after the movie was over. But he does know what details to zero in on. The women in "The Circle" mostly wear conservative, simple scarves and tunics, but occasionally, when one of them needs to blend in or conform, she'll swirl a dark chador around her head and shoulders.

The chador represents respectability, propriety and compliance, but for Panahi's characters it has a deeper, secret meaning. It's a magic cloak of invisibility. When Pari, visiting the hospital where her friend works, is required to don one, she is just like every other woman moving quietly and gracefully through the building's corridors. Like them, she looks shadowy and somber, but she's really just covering up, for safety's sake, what makes her different. Underneath, she's all light and sorrow and aching, tired beauty. If there are people on the outside who wouldn't understand it, then they don't deserve to see.