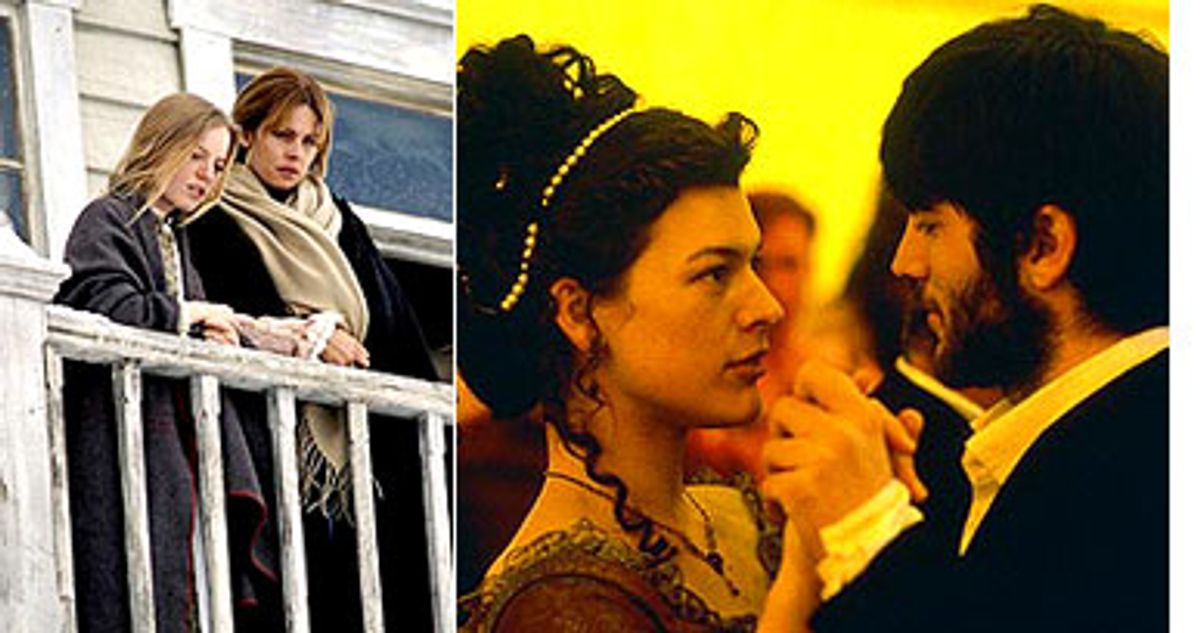 "The Claim," Michael Winterbottom's transposition of Thomas Hardy's "The Mayor of Casterbridge" to California's Sierra Nevada in the late 1860s, nearly 20 years after the Gold Rush, moves so freely, evolves so naturally, that it's easy to overlook just how dicey an undertaking it is.

It wasn't enough of a risk for Winterbottom ("Welcome to Sarajevo," "Wonderland") and screenwriter Frank Cottrell Boyce to fiddle with just one classic, so they've chosen to tell the story as an homage to another -- Robert Altman's great 1971 film "McCabe & Mrs. Miller." The movies share narrative elements: A frontier town built by an ambitious businessman who presides over a loose community of workingmen and whores; his lover and business partner, a madam who hides her emotions behind her savvy; Chinese immigrants who exist along the edges of the story; the potential disruption of the town's existence by big business interests.

They share visual elements too: Buildings that could be storybook cutouts against the mountain landscape; figures wading through waist-deep snow; the dramatic contrast of the wintry, death-still surroundings and roaring, consuming flames; the overall faded sepia warmth.

Most impressive of all is that Winterbottom achieves something of Altman's organic approach to working in a period setting. There's none of the stifling hat-in-hand reverence that usually afflicts filmmakers attempting to film a classic. The movie, shot by Alwin Kuchler, is often stunning to look at. Certain shots stick in your mind: The glow of candlelit tents seen against an icy blue night; a house moving, seemingly of its own accord, through snow-topped pines; a horse on fire galloping through a mountain ravine -- a searing image that seems to have sprung to life from the pages of some forgotten myth.

But Winterbottom never asks us to admire the pictorialism of what he's put on film. He and Kuchler have shot the film in a style that incorporates hand-held camerawork, shots that blur for expressive effect or come so close to the texture of the character's skin that they recall the intense and intimate way Sven Nykvist shot the faces of actors in the films he made with Ingmar Bergman. Winterbottom doesn't use Mark Tildesley and Ken Rempel's production design to dazzle us. The wooden buildings that make up the town of Kingdom Come looked lived in, a real place more than a set, and we're conscious that these trappings of civilization, a hotel, a saloon, a whorehouse and homes, carry the desire of their inhabitants to make their mountain dwelling a real town and not merely a bulwark against the surrounding wilderness.

The cast seems so at home in this setting that they inhabit it without any self-consciousness. Sometimes actors who are trying to make us believe that they exist in another time are reduced to play-acting, but the uniformly fine performances here show none of that awkwardness. We're conscious here that the characters are speaking in a language that is perhaps closer to our era than to the story's. But rather than seeming like an anachronism, it draws us into the period. The hesitant half phrases of the overheard and sometimes overlapping conversation (Winterbottom's approximation of the sound design that Altman pioneered) has the texture of real speech, not the preset feeling of actors reciting lines.

The freedom evident in "The Claim" may be partly due to its being a loose adaptation instead of a literal one. Whatever the reason, Winterbottom and his collaborators have paid Hardy the highest compliment. Giving him immediacy instead of veneration, they've blown off the dust that settles over respectful adaptations.

The story Hardy tells in "The Mayor of Casterbridge," the most melodramatic of his major novels, and the most dependent on the confluence of coincidence and character, is that of a man in late 19th century England who -- in a state of embittered drunken frustration -- sells his wife and infant daughter. Years later, the wife and her daughter show up in the town where he has established himself as successful businessman and the most prominent citizen. Determined to atone for his past sins as well as keep them from becoming known, he remarries the woman he abandoned. But the past is never so easily erased in Hardy, where character is fate.

Boyce and Winterbottom's decision to shift the action that precipitates the story -- the selling of the wife and child -- to California during the 1849 Gold Rush provides a plausible psychological and historical context for the action. The story's central figure becomes Dillon (Peter Mullan), an Irishman who was lured to America by the stories of gold for the taking and became just one more forty-niner with nothing to show for his efforts. The gold that he gets in exchange for his wife and child allows him to found the town of Kingdom Come. And that's where his wife Elena (the touchingly delicate Nastassja Kinski), impoverished and racked with tuberculosis and their daughter Hope (Sarah Polley), find him 18 years later.

Dillon isn't the same abstemious character as Hardy's Michael Henchard. He's just as guilt-ridden over his past but rougher, closer to the earth. (He has to be -- it means something very different to be a prominent citizen of a Wessex village in 1830 and of a California frontier town in 1867). Peter Mullan negotiates the tension between Dillon's coarseness and his respectable airs. Passing the evening at his table in the saloon, duded up in his evening clothes, a local grandee, Dillon looks somewhat trapped. You hear it in the way he calls for the crowd's silence as Hope recites a poem. Mullan makes you feel that Dillon's real nature is lurking beneath his finery, ready to burst out in fury, fury that could be directed as easily at himself as at another. And yet he's capable of tenderness, as when he places his head gently on Elena's breast, asking her, "Does that hurt?"

Dillon has sworn off drink but not all sensual pleasures. He looks most at ease, most at home when he's in bed with Lucia (Milla Jovovich), the town madam, whose business skills increase his prosperity. Dillon is hoping to increase the entire town's prosperity via the new coast-to-coast railroad, and he sets out to influence Dalglish (Wes Bentley), the young surveyor sent to scout and decide where the railroad will run.

Hardy must be among the most difficult authors to adapt. Only one "faithful" adaptation has ever managed it, John Schlesinger's underrated and now almost-forgotten 1967 film of "Far From the Madding Crowd." Winterbottom himself has had a go at Hardy with his 1995 "Jude." It was an honorable try but (apart from Kate Winslet's performance) that film of "Jude the Obscure" missed the negative transcendence of the book's harshness, made it more of a social tract than Hardy intended. Part of the challenge in adapting Hardy is surely his pace, which is both deliberate, in the establishment of character and setting, and shockingly sudden, in the events that the unfolding story have been -- unbeknownst to us -- preparing us for all along.

It's a fair question, too, how an author whose stories are so fatalistic and, like his settings, so unrelenting and harsh, can also give so much pleasure. The answer, I think, is that while Hardy is the omniscient narrator, he doesn't hover in judgment as much as stand on level ground with his characters, observing them, understanding that none of us is exempt from such failings and sins. Also, like all great artists, Hardy doesn't protect his audience, but he never simply works us over. The emotion he makes us feel is always in the service of his novel, and yet there are scenes in his books that are so indelible you carry them with you from the moment you encounter them. (No "transgressive" fiction will ever match "Jude the Obscure," which contains the single most shocking scene in any novel I've ever read.)

"The Claim" does justice to Hardy even though it works in a very different tone. The sensuality in Hardy's novels is all implied or repressed. The film's sensuality is overt, palpable not just in the amber wash of the interiors, the fabrics and furnishings, but in the songs Lucia performs for the saloon crowd, or Dalglish's good-natured acceptance of the whores offered to him when he visits Kingdom Come. What links the movie most securely to its source is the sense of fate that hovers over the proceedings. Watching Dillon determined to make up for his past sins, watching Lucia's resentment at his new attentions toward the wife and daughter he abandoned, and watching Hope respond to Dalglish's attentions as she keeps Dillon at a distance (she doesn't know she's his daughter, and he fears her finding out about his past), you feel that inexorable movement toward catastrophe that hovers over Hardy, even as the film proceeds in its own style.

When an actor makes his or her initial appearance in a bad movie, particularly one that garners a lot of attention, it's always a risk that they will be judged no better than their material. In "American Beauty" Wes Bentley was stuck playing director Sam Mendes' creepy stand-in (he was a filmmaker -- get it?), the repository of the movie's offensive and condescending message that the only way to see beauty in the world the film depicted was to maintain a stoned distance from it. He's alive as an actor in "The Claim," and it's a boon that Boyce and Winterbottom have allowed him a measure of humanity that the character doesn't have in Hardy's novel (he's not so much a paragon of virtue that he can't enjoy a drink or a woman). Bentley does a nice job of balancing sly experience with youthful eagerness, and the mix draws out Sarah Polley in their scenes together. Polley is a canny enough presence that she can play Hope's sweetness and sincerity, her devotion to her ailing mother, without making her seem a Victorian throwback.

The cast works as an ensemble, though I have to confess to being especially impressed by Milla Jovovich's performance. Everything about Jovovich is eccentric, from her looks (can be there such a thing as birdlike ripeness?) to the emotionalism of her singing (which I find riveting), to the way she has Lucia employ her very presence as if it were a vague challenge to whoever she encounters. Jovovich has a unique blend of flintiness and vulnerability, and sudden startling reserves of strength -- like the deep, cold register she uses with Dillon when he abruptly leaves her.

"The Claim" is one of those rare literary adaptations that finds its fidelity in freedom, that stands as both a fitting version of its source material and as its own creation. When Dillon's self-recrimination is finally unleashed in a chillingly contained act of destruction, and in the final shot, which drifts away from the inhabitants of Kingdom Come to take in the blighted town, Winterbottom approaches the bleak majesty of the knowledge that Hardy possessed, the intimacy of the "general drama of pain" where "happiness was but the occasional episode."