The music known as Vin Scully

In which a reader's recollection of the acclaimed baseball announcer, still "impossibly hale, red-haired and perfect," makes our day. 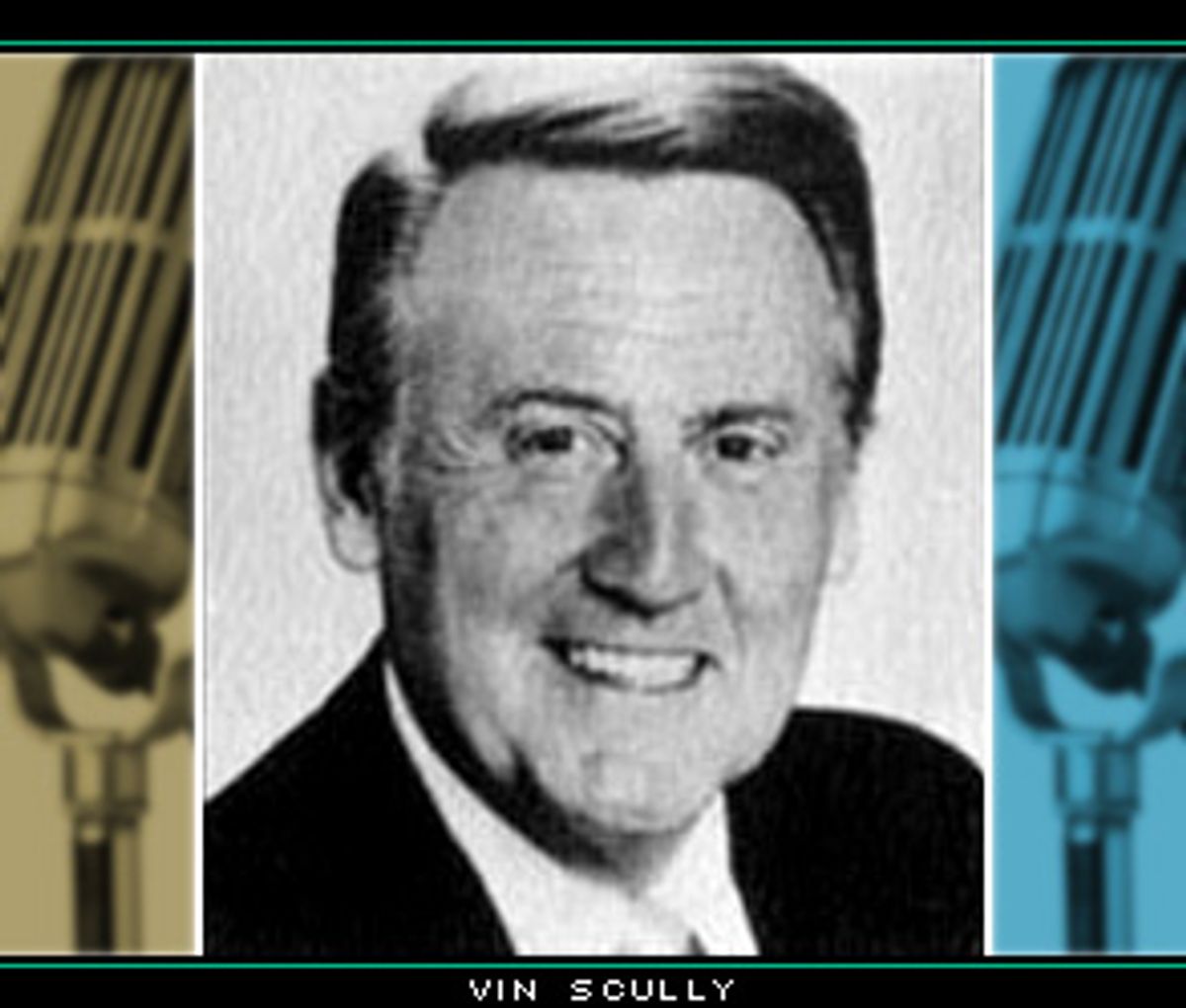 This week the stars must be in alignment in the Great Galaxy of Baseball. On Tuesday night, the San Francisco Giants' Barry Bonds hit his 500th career home run, and the following day the Los Angeles Dodgers, who'd lost to the Giants in San Francisco the night before, announced that the Dodger Stadium press box would be named in honor of Hall of Fame broadcaster Vin Scully in a Saturday ceremony. Also on Wednesday, coincidentally, we received a letter from reader Jennifer Douglas in response to a Brilliant Careers profile of Scully first published in October 1999 at the end of his 50th season of announcing.

In that article, writer Gary Kaufman, who now uses his middle name in his byline, King Kaufman, and also happens to be a musician, said of the veteran announcer, "Vin Scully has the most musical voice in baseball. He doesn't have the clipped, old-time-radio cadence of most broadcasters who date back to the '50s and beyond. Although his timbre is thin, everything is smooth and rounded. The words slide into each other. He has flow. The melody rises and falls on the tide of the game. You can almost hum along to Vin Scully."

One of the pleasures of publishing on the Web is that all work exists in a steady state of nowness -- an article that appears today in Salon looks much like a piece published in, say, October of 1999. For any number of reasons, some efforts hold up in this steady state better than others. Like Scully himself, Kaufman's article has aged especially well and deserves to be read and re-read -- and what better time to do so than when baseball is at its zenith.

Also worth reading is the letter from Douglas. Salon receives hundreds of letters each day -- many are thoughtful and perceptive, or funny and critical, and some are just plain foul. But every now and then we get one that confirms the authentic connection with a reader that writers and editors dream of. Jennifer Douglas' letter, which follows, is such a one. It serves as a fine, bittersweet introduction to Kaufman's piece and stands on its own as an eloquent recollection and celebration of Scully, baseball -- and other things:

I too grew up listening to Vin Scully, a fact about my life that is so important and personal that I almost resent that it is a fact of your life too. However, you did it justice, superb justice. I was 8, hiding under my covers with my transistor radio, listening to every word of every game, except, of course, for those that I attended in person. I went to every fourth game from the time I was 8 until I was at that impossible high school age. We sat on the third base line in the second tier -- the orange seats. I could see Scully's hair perfectly from my vantage point. That hair was the heart of the experience. I glanced at it a million times in my youth. I never brought a radio to the game. They were completely unnecessary, not because we could see the game, of course, but because there were 10,000 of them tuned to Vin.

I remember the game you quoted as well as the no-hitters. I remember Koufax being on base, having actually gotten a hit in the middle of one of his no-hitter games. I remember Scully saying they were running him out his coat and that they would bring him a chair if they possibly could.

I got to the line in your article, the quote about the million butterflies and I cried for my dead father, the scores of years during which I did not listen to Scully, and I cried out of relief. I have not listened to Scully since he retired from the Dodgers (apparently an act that did not stick) sometime during my rebellious and distracted years.

Let's see, there have been 25 years since then, whole historical periods: Watergate, the fall of the Berlin Wall, Whitewater, the birth and full maturation of the personal computer, the Web, O.J. and Monica, to say nothing of my own twists and turns. Last weekend, I was visiting Santa Barbara, Calif., turned on a TV in the bed and breakfast and there it was -- that voice, infallibly recognizable after two syllables. It can't be true! I said. He is doing play-by-play for the Dodgers?

My son is 8 and has just started Little League. The three of us sat, riveted to the set for the rest of the game, my son drifting off to sleep to Vin music as I had done so many times at his age. I was waiting, dreading the post-game show, when I would see him old, doddering, crippled, gray. I had always assumed he was my dad's age. My dad passed away last year at 82. Finally, there was Scully, center screen, impossibly hale, red-haired and perfect. That did not bring tears.

Not until I read your article and the quotes you included lifted decades of haze from my soul and I could hear his voice, floating above the otherwise completely still stadium, as I gazed out to the Union 76 sign over center field, and the double rows of buses just beyond the bullpen where no one would dare warm up. At will I can bring my gaze down and my focus forward to watch Koufax's windup, his kick and the sound of the perfectly placed fastball slamming into the glove. I can replay it as a curve ball, and watch it hang in the air on its way in.

It is a couple of days past Easter and I'm not even Christian, but I think you have offered me a tiny taste of resurrection.

Thank you for this.