Bush to once-busted students: Do as I say

The ban on college aid to those convicted of drug charges is arbitrary -- and has more than a whiff of hypocrisy. 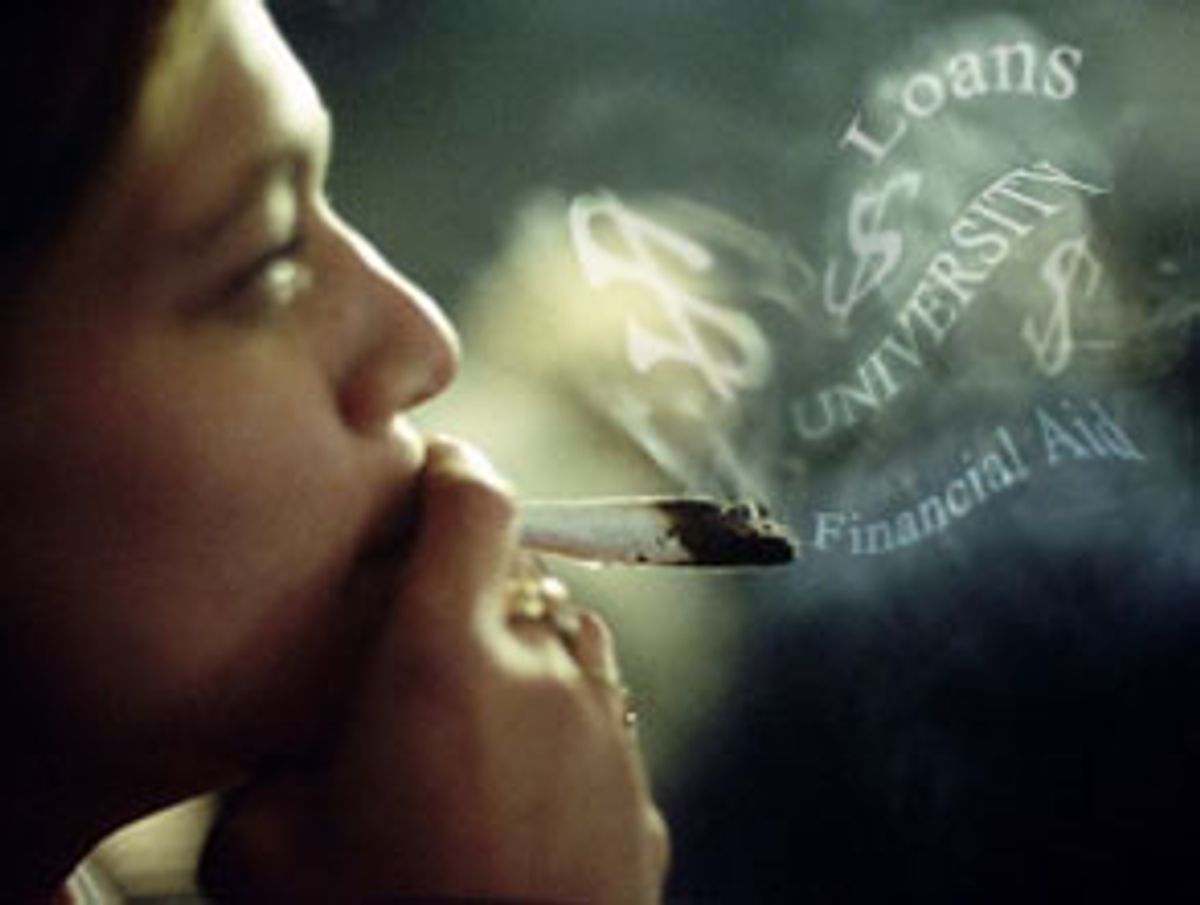 When then-candidate George W. Bush answered questions during the presidential campaign about whether he had ever used illegal drugs, he refused to give a yes or no answer, claiming that his past was irrelevant. "I am asking people to judge me for who I am today," he said in a September 1999 interview. "I hope it doesn't cost me the election. I hope people understand."

That nonanswer was good enough to get Bush into the White House, but it wouldn't be good enough to get him a student loan under his administration's higher education policy. On Tuesday, the Department of Education announced that it would enforce a law that would deny financial aid to students who answer "yes" -- or refuse to answer at all -- to one simple question: "Have you ever been convicted of selling or possessing drugs?"

But regardless of the fairly compromised position of our president on the topic, the law is unfair and unjust -- both because it imposes such severe penalties for all drug offenses, including relatively innocuous recreational drug use, and because it disproportionately punishes poor and African-American youth. Perhaps worst of all is the fact that it actually makes it more difficult for young people who have had scrapes with the law to improve themselves.

"It sends a message of government stupidity," says Eric Sterling, president of the Criminal Justice Policy Foundation, an organization that works for reform of the nation's drug laws. Sterling claims that by delaying or denying past drug offenders the chance to go to college, the government will reinforce the negative circumstances that lead to drug crimes: lower income potential, unemployment and alienation from society. Sharda Sekaran, associate director of public policy at the Lindesmith Center Drug Policy Foundation, concurs. "It's counterintuitive to suggest that keeping people away from higher education will help stop drug abuse," she said.

The restrictions on financial aid for students with drug records were signed into law in 1998. Former congressman Gerald Solomon, R-N.Y., was the primary sponsor of the policy, which was tacked onto the reauthorization of the Higher Education Act, the law that governs federal financial aid programs.

But the policy does not enjoy universal support in Congress. Rep. Barney Frank, D-Mass., has led the charge to have the restriction repealed, and has put together a coalition of more than two dozen mostly Democratic representatives to overturn it. On Feb. 28, he introduced H.R. 786, an amendment to the Higher Education Act to repeal the ban, his second effort since the policy went into effect.

The policy does not ban aid to every student with drug convictions. Those who have been convicted of drug crimes as minors don't need to worry about the question. To Howard Simon, spokesman for Partnership for a Drug-Free America, that proves that the law doesn't punish kids for youthful errors. "We're not talking about some 15-year-old who is caught with a joint," Simon said. "It's people who are old enough to understand the consequences."

That's not always the case, counters Jason Ziedenberg, a senior policy analyst with the Justice Policy Institute. Ziedenberg points out that, increasingly, prosecutors are apt to charge juveniles as adults for drug crimes. And, he says, a disproportionate number of those are African-American kids.

Ziedenberg has the numbers to back up his case. According to the Office of Juvenile Justice and Delinquency Prevention, between 1988 and 1997 the number of juveniles eventually tried as adults for drug-related offenses rose 78 percent. He also points out a study conducted last year by Building Blocks for Youth, an organization that monitors the way the criminal justice system affects minorities. While 59 percent of juveniles formally charged in drug cases were white, only 35 percent of those eventually tried as adults for drug offenses were white. Black juveniles, who made up 39 percent of youngsters charged in drug crimes, made up 63 percent of those charged as adults. "It's certain," Ziedenberg says, "that black and Latino kids will get the worst of this."

Russell Selkirk isn't a member of a minority, but that didn't keep him from being snagged by the aid ban. Now a sophomore at Ohio State University, Selkirk was busted for marijuana possession four months after his 18th birthday. "Me and my friend were coming home from work one night and we stopped in this parking lot and we started to smoke," Selkirk recalls. "Then there were these two undercover cops tapping on the window."

After he pleaded no contest to a misdemeanor possession charge, Selkirk's driver's license was suspended for six months, and he was sentenced to one year's probation and 20 hours of community service. Selkirk thought that that would be the end of his problems, until he filled out the federal student aid form for the 2000-2001 school year.

"So I told the truth," Selkirk said. "And then I couldn't get any aid."

Selkirk's parents picked up the bill for his tuition, but the irony is that he could've done better by lying or, at least, by keeping quiet. During the 2000-2001 year, when the ban first went into affect, the Clinton administration didn't fully enforce the law. Of close to 10 million applications for aid received by the Education Department, 845,000 failed to respond to the question about drug convictions. The administration followed up with those applicants, but approximately 279,000 of those students still received aid that year without ever answering the question.

Selkirk was one of fewer than 10,000 students who admitted a drug conviction and lost aid. But he did have another option. Those students who acknowledge past drug convictions are still eligible, as long as they have completed a drug rehabilitation program after their conviction. But Selkirk never went into rehab. "They cost $500 to $1,000 for a two-week rehabilitation program," he says. "I wasn't about to be able to afford that."

Too bad, because rehab could get even the worst of drug offenders approved for aid. On the form, applicants who respond "yes" to the drug-conviction question are then asked if they have completed a rehab program since their conviction. Those who respond with a "yes" -- even if it's a student with multiple drug convictions of a serious nature -- will have their forms processed. Any who answer "no" -- even those, like Selkirk, with one or two minor, recent convictions -- will have to wait over a year to become eligible for aid.

Just which drug offenders are eligible for aid, and when, is a question not easily answered by examining the worksheet that is supposed to explain the policy. The Byzantine formula considers whether a prospective student was convicted of possessing drugs or selling drugs (a more serious offense), and how long it has been since the applicant was last convicted. But there is no distinction made between selling pot and selling heroin, and no acknowledgment of the difference between a felony and a misdemeanor drug offense.

Consequently, eligibility for aid seems fairly close to random. If an applicant were to have been convicted three years ago of selling crack to schoolchildren, even without a rehab program, he or she could be immediately eligible for aid. But a single new conviction for marijuana possession -- without rehab -- would delay eligibility for a year.