"Turning on the Girls" by Cheryl Benard

Women run the world in this satirical novel, banning stiletto heels and rape fantasies and making vegetarianism and "nurturing" classes for men compulsory. 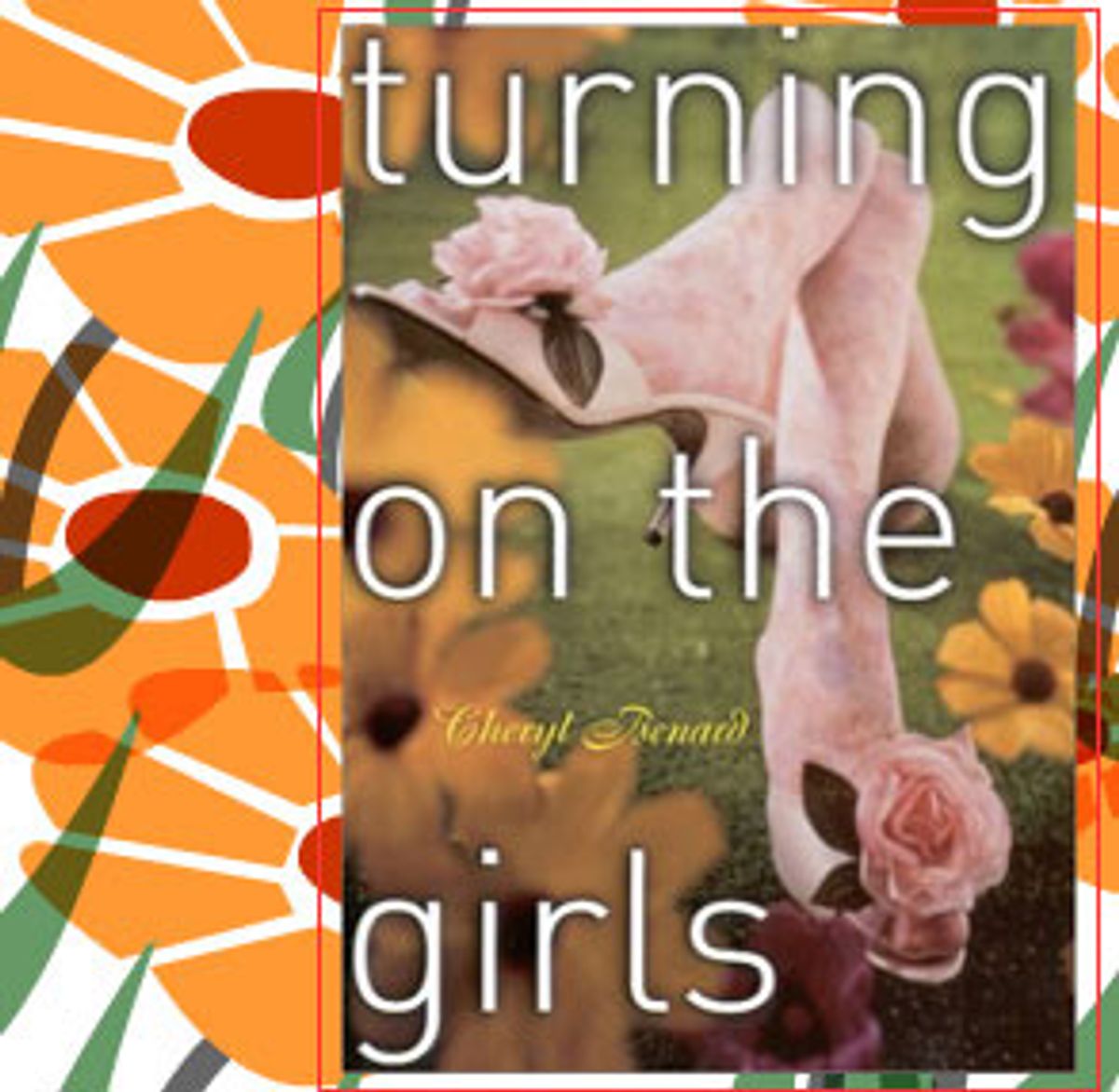 Imagine a world in which women have taken over. The patriarchy is gone and a kinder, gentler and utterly more sensitive government is in charge. It's a place where vegetarianism is de rigueur and benevolent gynocentric religions have replaced the wrathful Judeo-Christian God. Stiletto heels are just a memory -- and, best yet, all of the nastiest men have been exiled to a modern-day Gulag Archipelago (albeit with better toilet facilities) called Zone Six. Viva la revolución!

Yes, as any feminist worth her salt can tell you, the world would be a better place if women ran it. Or would it? Cheryl Benard's first novel, "Turning on the Girls," takes this old matriarchal chestnut and turns it on its head. Her satire envisions the world after the feminist revolution and asks the unanswerable question: "Is clever-but-ruthless better than nice-but-naive?" But although the book is wittily conceived and well written, consuming "Turning on the Girls" is kind of like an avowed carnivore eating a veggie burger: It may look juicy and delicious, and the condiments dress it up just fine, but ultimately it's an unsatisfying substitute for beef.

To read "Turning on the Girls," you'll have to first swallow the rather thick premise. We are at some indeterminate year in the future (I'm guessing 10 or 20 years out), after an undescribed revolution in which the women of America (and possibly the rest of the world, though this also isn't made clear) have wrested control from those old Neanderthal men. Fine enough: Complete suspension of disbelief may be the pedestal that this book is built on, but that's the nature of social satire, right?

Post-revolution, the women have turned the world upside down and installed their own kind of mind control. As Benard writes, "The female persons who are now in charge of everything believe that a revolution has to change your thinking, otherwise, before you know it, you will be right back where you started from. So they put a very large staff in charge of women's brains and how to, you know, kind of launder out the sediment, iron out the kinks of centuries of oppression." It's probably an inevitable conclusion that brainwashing is necessary to rid us of old and heavily socialized habits, even if it is dangerously unrealistic in its application; and this is where Benard's plot kicks in.

Lisa, the protagonist, is a very small cog in this mind-control machine. She works at the Ministry of Thought; her job is to wade through centuries of pornography, from the Marquis de Sade to "The Story of O," and find appropriate fantasies for the newly empowered women. Out with the submissive rape fantasies; in with mutually respectful consensual sex. The only problem, of course, is that sexual desire is sticky and messy and doesn't cotton well to regimes whose primary goal is self-actualization, so Lisa is having a really tough time doing her job -- especially when she discovers her own addiction to cheesy romance novels of the Fabio variety.

Meanwhile, the revolution is troubled. Not only is the new dominant paradigm in danger of being toppled by an underground men's movement called Harmony, which longs to bring back the days when men were men and women wore Lee press-on nails, but even the new female-led government faces trouble from within. With the help of her trusty sidekick-cum-research assistant, Justin, Lisa has to infiltrate the Harmony movement, stop the upcoming counterrevolution and discover her own inner sexual desires to boot.

Lisa's impossible quest to define "feminist" sex is, of course, a metaphor for the book's grander critique of feminist philosophies; the matriarchy, Benard suggests, is just as doomed to carefully define itself right out of existence. Benard seems to find most of the trappings of feminism to be dry, humorless and distastefully New Agey, and she eviscerates them mercilessly (although she eviscerates men with equal mercilessness).

In her rewritten history, offices have built-in "mood enhancers" that pump the scent of sage through the air; the tango has been banned; and instead of Barbies the local toy stores now sell "Sylvana the Witch" dolls. Hooters is a thing of the past, although female executives might traipse off to ogle men in tights at Balls for an ironic laugh -- but only after attending their Womanpower-Girlpower Transgenerational Neighborhood Sports classes and earning some nurturing credits by babysitting a local kid. Matriarchy is "a great deal like Southern California, with lots of psychic energy zooming around and everybody really in tune with, you know, nature and their bodies and stuff." Meanwhile, the men are undergoing reeducation classes and living in dorms, and learning how to cook, clean and nurture lap dogs. Those men who haven't been written off as hopeless cases or dangerous to society have instead been exiled to Zone Six. It all sounds absolutely awful.

It's in these kinds of details that Benard's mordant sense of humor shines through; no one in "Turning on the Girls," male or female, escapes without sacrificing a few pounds to her razor pen. At times, the book is laugh-out-loud funny, and anyone who has spent any hard time in feminist theory classes should derive a wicked thrill from seeing all that tedious gender theory taken down a peg or two.

The book is full of omniscient authorly interjections, as Benard manipulates her readers into second-guessing her own plot ("I know what you're thinking. You're thinking these two are going to fall in love," she writes, after chapters full of hints that Justin and Lisa are about to get it on); this tactic eventually wears thin. More egregiously, her plot gets so convoluted that it's impossible to follow, and even more difficult to care. The Harmony movement spies turn out to be double agents, and triple agents, and then revolutionary traitors, and then radical reformers, until your mind reels from trying to keep tabs on who's zooming who. And toward the end of the novel the thread about Lisa's sex life and pornographic research swiftly devolves into a cheesy pastiche of the same romance schlock that Benard was satirizing in the first place.

But perhaps most disconcertingly, Benard doesn't come to much of a conclusion about the burning question of whether matriarchy would be any improvement over patriarchy, other than to point out that both "clever-but-ruthless" and "nice-but-naive" are flawed leadership approaches; or, as she puts it, "neither is very appealing." Well, duh. "We are not a very nice species," notes Lavinia Tree, the revolution's Founding Mother, toward the end of the novel. "Could anyone claim that women are fundamentally good? That could not be claimed. But I suppose that, as hands go, ours are a little bit cleaner."

Yet Benard does offer a more interesting contribution to feminist theory in the words of one her "radical reformers," who wants to take a more punishing approach to male misbehavior. "For one gender to dominate the other, the one that's going to be subordinate has to be made to feel like a minority. It has to believe itself to be weaker, dumber, and dependent on the other," notes Nadine, the "Nazi." So how could women take over the world? Simple: by decimating the male ranks so that we're left with a 30 percent to 70 percent male-female ratio. It's a shame Benard doesn't pursue this further: Sure, gendercide is a ruthless solution, but it makes for better fictional material than warm and fuzzy hand-holding. I'll pass on that veggie burger; can I have some carpaccio, please?