Gov. Gary Johnson comes to Washington hoping to find converts to his anti-drug-war crusade. He leaves one frustrated man. 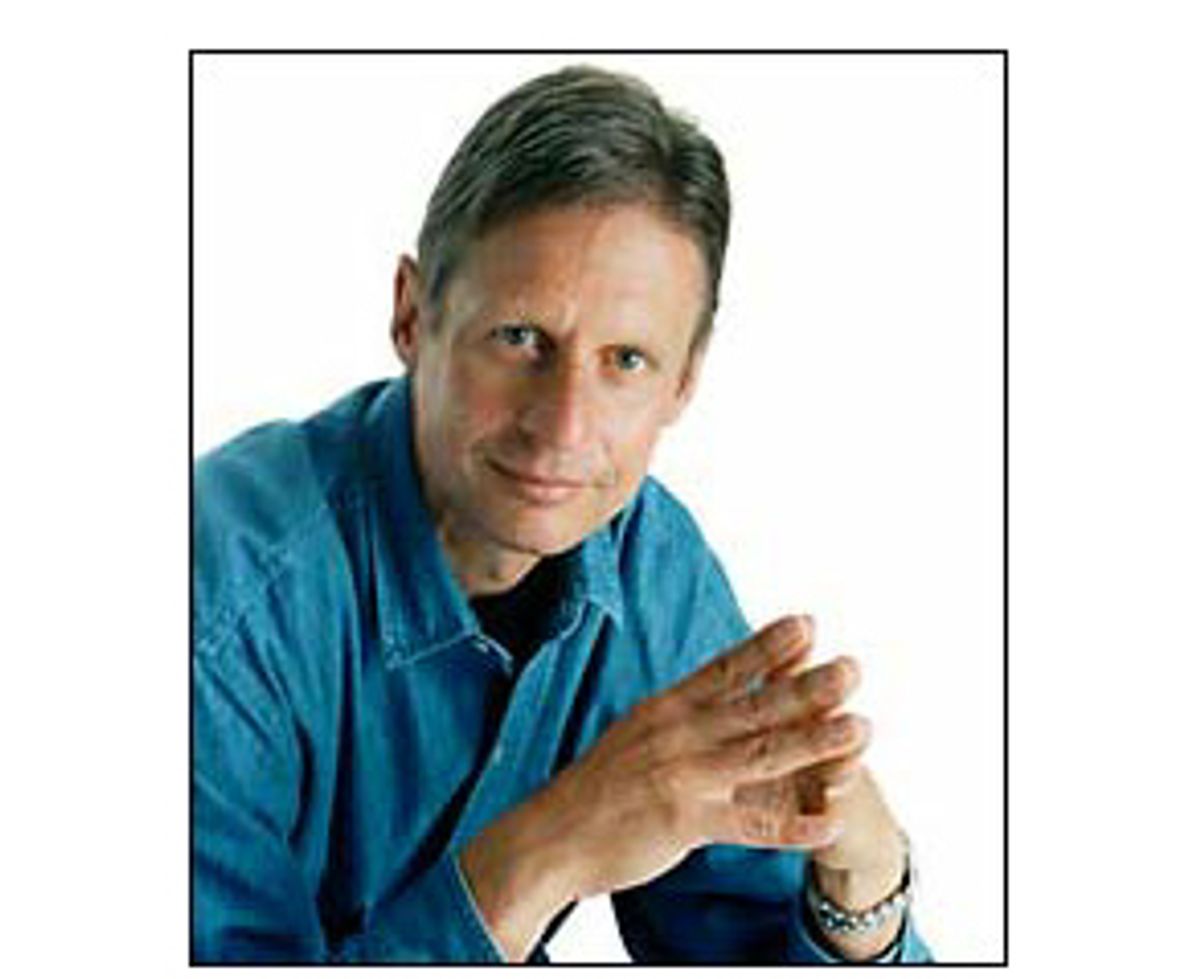 Gov. Gary Johnson, Republican of New Mexico, shakes his head. He doesn't seem angry, or outraged -- just sort of a combination of the two.

But he's also kind of mellow. Like he's used to it all.

We're sitting in the green room at C-Span; Johnson's just finished taking an unreal number of supportive viewer calls on the morning chat show, "Washington Journal." But the conversation eventually turns to the victims of the shot-down missionary plane in Peru, which Johnson -- who has perhaps become the nation's leading critic of the drug war -- sees as just two more casualties in a senseless losing battle.

Veronica "Roni" Bowers and her 7-month-old baby daughter Charity died when their single-engine Cessna 185, owned by Baptists for World Evangelism, was shot down by the Peruvian air force because it was suspected of being involved in drug trafficking.

"It's happening every single day in the name of 'We don't want our kids to do drugs,'" Johnson says. Not that he thinks that the Bowers' deaths will be registered by the American public as two more notches in the belt of a failed war. "It's just today's page in the drug war," he says. "There was a page yesterday and the day before, and there's going to be a page tomorrow."

On Tuesday, Johnson returns to New Mexico after a six-day jaunt to the nation's capital, where he headlined the annual conference of the National Organization for the Reform of Marijuana Laws (NORML), accepted an award from AIDS Action on Monday, and racked up one media appearance after another -- MSNBC's "Hardball," CNN's "Crossfire" and NBC's "Meet the Press."

But it seems like Johnson is leaving Washington without the feeling that a whole lot has come of his trip, at least in terms of influencing politicians or the press. Congress is just as committed to pursuing "tough-on-crime" anti-drug measures, which Johnson thinks are futile and unrealistic.

"You saw in recent weeks [Congress] talking about ecstasy and making penalties tougher?" he asks me, incredulous. "You know, c'mon!" he shouts, exasperated. "C'mon!"

Johnson seems much younger than his 48 years, and he speaks with a distinct Sante Fe inflection, which ... can sound a little flaky, and makes it easy for the Washington establishment to dismiss him. The Washington Post relegated coverage of his NORML appearance to its Style section, where the writer made much of NORML executive director Keith Stroup's reference to Johnson as a "high elected official."

Johnson rolls his eyes. He doesn't understand why the media doesn't report more critically about the approximately $50 billion a year spent on the War on Drugs (with roughly $10 billion in federal money devoted to combating marijuana use alone). In 1998, 600,938 Americans were arrested for simple possession of marijuana; an approximate 80 million Americans are said to have experimented with marijuana in their lifetimes, including Al Gore, Newt Gingrich, Clarence Thomas, and -- who knows -- maybe even President George W. Bush, who refuses to answer the question.

Bush is a tricky spot for Johnson, and the president, whom Johnson calls a close "personal friend," threatens to erode some of Johnson's credibility on this issue. Bush's Department of Education is demanding that college students who take out student loans answer questions about their drug history -- questions that Bush won't answer.

But when I bring up Bush's evasiveness on the subject of his own drug history, Johnson quickly changes the subject to the guy who lost last November.

True enough, if irrelevant since Gore's not enforcing the nation's drug laws. But then there's Bush's nomination for drug czar, John Walters, whom even outgoing czar Barry McCaffrey has expressed concern about for emphasizing interdiction over education and treatment.

Johnson, however, says he wants to reserve judgment. "I certainly want to give Bush the benefit of the doubt here, and recognize, first of all, that anything outside the status quo is significant," he says.

But Walters is hardly an outsider. He served as former deputy director at the Office of National Drug Control Policy under William Bennett during the first Bush presidency. He's considered to be from the tough-on-crime school, arguing in favor of stiffer penalties and not considering drugs to be much of a health issue.

Regardless, Johnson says that he has hopes that Walters will favor "a repeal of federal mandatory sentencing, the whole 'Let's start getting tougher'" approach. "That would be a significant start."

It would be, sure. But Johnson's got to know that Walters might be even more of a hard-liner than McCaffrey. Bush and Gore aren't the only ones who can be evasive, it would seem.

But perhaps I'm expecting too much from the governor. Though it would be an expectation he himself created, with his stunningly bold discussions of, say, Zurich, Switzerland's state-funded free heroin for addicts, which Johnson says has reduced crime, the spread of HIV and overdoses.

Unquestionably, Johnson has been courageous in taking a stand he calls the "death knell" to any political career: the decriminalization of marijuana.

He points out that half the resources devoted to funding prisons, police and courts is spent on fighting what he sees as a health problem. A full 1.6 million Americans are arrested each year on drug crimes, and Johnson thinks that approach is just unrealistic. Since drugs are clearly here to stay, why not do everything we can to make sure their usage is safe?

In New Mexico, Johnson has pushed for a bunch of new laws that passed the state Legislature earlier this year -- including one that allows pharmacies to sell syringes to drug users, hopefully reducing the number of shared syringes and decreasing the spread of HIV and other diseases, and another law will essentially legalize some drugs that can be used to combat heroin overdoses.

And unquestionably this has come at a political price. For example, while Johnson announced that the endorsement-deprived Steve Forbes was his choice among the presidential candidates last year, his name was conspicuously absent from many of Forbes' promotional materials.

And he has taken his lumps. In October 1999, McCaffrey flew to New Mexico to blast the governor, telling the press that he had heard stories that teenagers were referring to the governor as "Puff Daddy Johnson." Johnson claims to have been delighted with the attention, though he slams McCaffrey for engaging in "the art of war ... in the worst possible way."

The "best" possible way, presumably, would be the careful, wary way Johnson is trying to negotiate precarious terrain -- without criticizing Bush, the man whose drug history the nation is still ignorant about, even as we may face what NORML representatives fear will be another patronizing "Just Say No" assault.

He seems liberated whenever Bush is not the subject of conversation. Johnson bursts with ideas about how the conversation around drug policy could be improved. While praising the film "Traffic" for doing "the best job of anything I've ever seen in pointing out the futility of the drug war," he expresses serious reservations about its message, since the film never offers any real solutions.

"They could've taken one minute to plant alternative seeds," he says. "When Michael Douglas" -- portraying a Drug Czar - "says, 'C'mon, what are some of the other ideas outside the box?' at some point we could've heard one minute worth of alternatives here.It was an opportunity missed."

But at least "Traffic" examined the subject, unlike the media, Johnson believes.

His reticence on Bush and the Drug Czar-nominee, though, shouldn't be surprising. It's not as if Johnson isn't the first to admit that he's a politician. After all, he didn't make his questioning of the drug war a cause until he secured his second term in his term-limited job.

"For all my 'courage' and 'honesty,' I waited until term number twoto elevate the issue," he admits.

And, he adds, his position in favor of the decriminalization of just marijuana, and not all drugs, is because he's trying to find a "pragmatic" course.

As gifted a debater as Johnson is on the subject of drugs -- and he is, bursting with figures and facts and numbers -- there is one other subject on which he trips. The people.

He says "the people are way ahead of the politicians on this one."

But then he says that talking about the issue is a political impossibility. "I've been in the following situation" that every member of Congress experiences, he says. "They go to the grassroots meetings. And there are 25 people in the room, and someone says, 'You're not gonna support the legalization of drugs, are you Congressman?'"

With a touch of drama, Johnson "acts" like a typical pol. "'No, no,'" he says, theatrically raising his arms in resignation. "'I think that sends the wrong message to kids.'" "Well, that's what happens," he says. "They can't cross over the line."

But one doesn't follow the other. If the people were behind it, no one else would care.

"They polled three weeks ago, 'Do you think the war on drugs is working?'" Johnson reports. "And 74 percent of the American people said, 'No, it's not working.' But when pressed, those same people in that same poll, [asked] 'What do you think we ought to be doing?' [responded in favor of]a continuation of what we're currently doing."

"So I just proved your point," he acknowledges. "But people aren't aware of what the alternatives are. If we give them a little bit of 'Here's the situation, and here's what some other alternatives might be,' they quickly grasp that."