What if our goals are meager and strange?

Perfection is the new minimum in child rearing and I am the lowest common denominator. 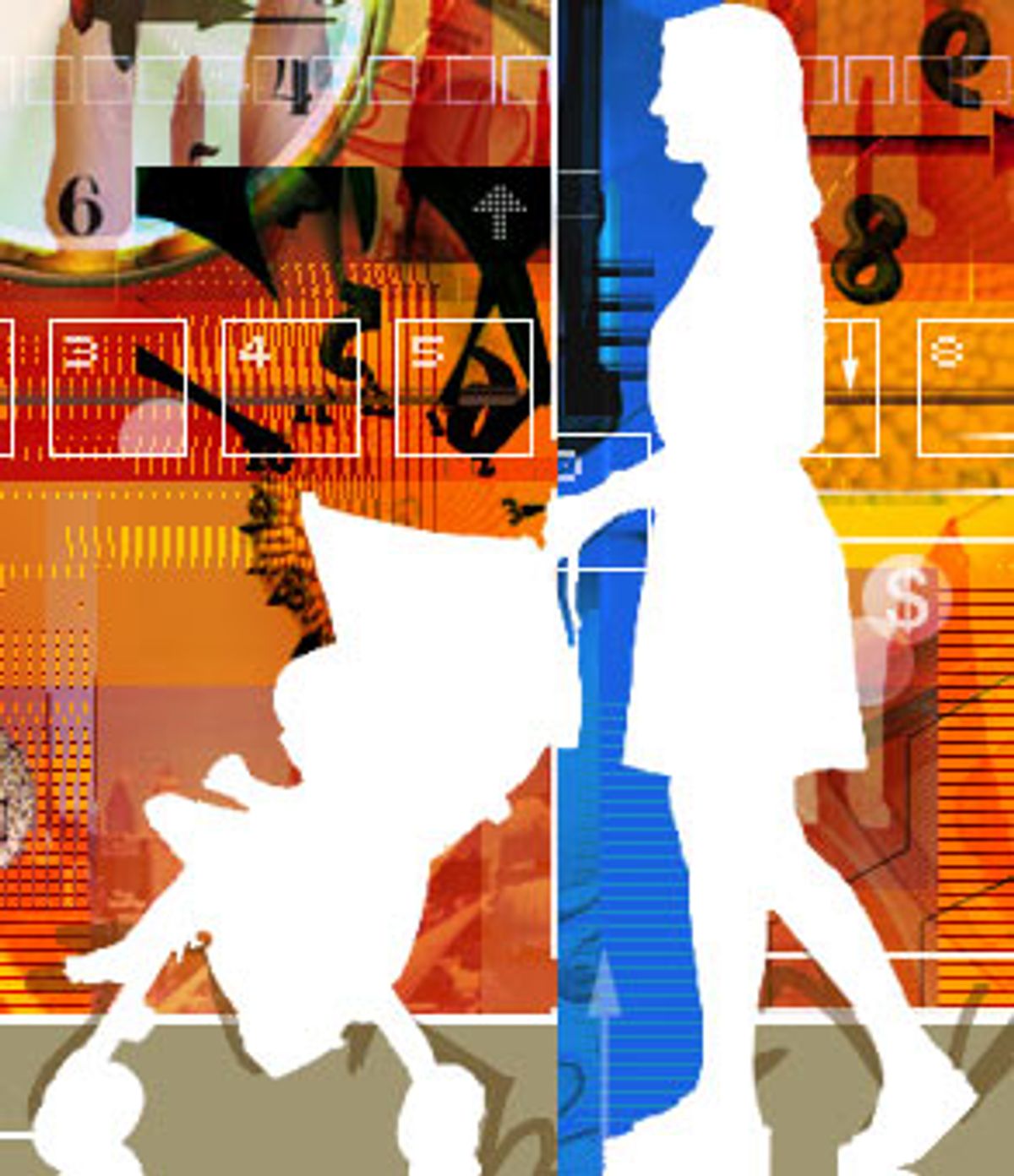 In the bad olde days of parenting -- before there was parenting -- a mother's greatest achievement (this was not the father's turf) was to keep her child alive. It was an enormous undertaking, mysterious and discouraging: A mother could not expect to manipulate the various acts of God, forces of nature and criminal tendencies that threatened her children, but she could expect to shoulder some blame if they did not survive. (The only alternative was to die in labor, which also could be construed as weakness.) It was possible to love and lose your children and feel tremendous guilt, to fail. But it also was possible to view their arrival at the ripe age of 10 as a personal victory, as success.

Now that some of us -- parents of means, parents of certain privileges -- are parenting, and not just raising our kids, their basic survival is a gimme. We are reminded, frequently, that children are "our future" -- not so much in the sense that they will be the next owners of the family farm and ultimately responsible for the mortgage but more in the sense that they are tomorrow's leaders and therefore must be perfect in the myriad ways that we find to evaluate other people. It is the quality of our children that is up for grabs -- who they are, what they become, is up to us, the mighty breeders.

The implication here, indeed our fondest hope, is that we face much better odds these days and therefore can take on more responsibility for our beloved heirs. Childhood illnesses, lightning, the circus -- these are no longer grave threats. They constitute the small stuff, which we don't sweat if we are cool, which leaves us with plenty of time to polish our children's personalities to a high gloss. Perfection is not too far-flung a goal for today's parents and failure can be embodied in something so simple, and seemingly benign, as a child's thumb-sucking, nose-picking or nursing at an age that is considered by "experts" as "inappropriate."

A society of experts, aided and abetted by wealth and a collective subconscious fairly reeling with guilt and expectation, has thrown down the gauntlet. If we dare to have children, we are dared to make them worthy, to sculpt good citizens out of these squalling interlopers.

And we understand this challenge; it is nearly impossible to avoid. There are at least 1,000 parenting books in print and the Internet is lousy with parenting sites, chat rooms and advice lines. Every medium, for-profit or non, has a line on raising moral, athletic, healthy, spirited, smart, well-disciplined, polite, attractive, joyful, entrepreneurial, friendly, competitive, successful children. And each adult who was once a child is a font of advice, an effusive docent for parents as they negotiate life's labyrinth.

Were there a prescription for success, this would be dandy. Each and every finger-wagging guide would be reminding us of the same five rules or 10 commandments or 101 tips. But there are as many definitions of success in child rearing as there are books warning us not to fail. And potential failures are too numerous to mention.

My personal favorite, where theories of successful child rearing are concerned, is articulated by Dr. Robert Firestone, whose writings on the topic were eagerly passed on to me by a writer. Firestone has taken the whole "parents as the determiners of all that is good and bad in their children" to the absolute extreme. This is a guy who appears to champion the newly popular position that parents are responsible for every detail of their child's behavior, including, but not limited to, colic and school shootings. And his prescription for success is simple: Parents should not be allowed to raise their own children.

"Parents mistake the strong possessive bond and attachment to their offspring for genuine love feelings," writes Firestone. "Parental good intentions are not a substitute for nourishing love, which could only be provided by a psychologically healthy and independent adult."

Parents, says this expert, are "toxic" due to their own development under the false and destructive "love" of their parents -- a vicious cycle that can be nipped in the bud, suggests Firestone, with "substitute parenting." In other words, parents are unlikely to be successful unless they let someone else raise their kids. Which would make the original parents childless, which, according to Firestone, is pretty much the only way to be successful as a parent. To be a parent without children.

Maybe I flatter myself, but I believe my dysfunctional development to be no worse than that of a potential substitute parent, who, one has to presume, had parents of her own. Of course, parents like me "lie to themselves and they lie to the kids and they don't even know that they are lying," according to Firestone. And it is precisely here where I stop reading, where I decide emphatically that what I don't know and my kids don't know won't hurt us.

Perhaps it comes down to a matter of choice. But the right to choose one's definition of success in parenting can be as controversial and subject to righteous protest as the right to choose parenting in the first place. My husband, for example, believes that he will have been a complete success as a parent if neither of our daughters becomes an animal rights activist. This parental aspiration is likely to infuriate not just animal rights activists but everyone, including members of his own family, who believes it is a narrow and frivolous goal.

I, too, am prone to tiny, solipsistic definitions of parental success. One of my earliest declarations of victory came when my eldest daughter was 4 and we were at a party (a circumstance that might easily have been interpreted as a parental failure). As it got late and the gathering wound down, several guests brought out guitars and drums. When the musicians called for requests, Hannah piped up. "Anything by the Velvet Underground!" As far I was concerned, I was done.

And what if our goals are meager or strange? What if it is enough for me that my 14-year-old is a Wodehouse fan and my 5-year-old likes to whistle? Well, this is just the sort of attitude that drives many well-intentioned comrades nuts; they believe it is the parents with low expectations whose children are making life miserable for the rest of us. The kid who is touching things, talking too much, identifying with Barbie, staring -- her parents are simply not asking enough.

Maybe. But the well-mannered child who plays violin when she isn't rowing or debating or making stained glass or brushing her teeth? She is a parent porn star, not necessarily a success. We all love the hardcore moments: a ballet solo in the "Nutcracker," the brilliant interpretation of Pip in a local production of "Great Expectations," the habit of quoting Shakespeare while fixing neighborhood computers to earn money to pay weekly bus fare to play with a jazz improv group downtown. Looks good on paper and in public, but the parent who believes herself to be in the clear as long as her kid is a crowd pleaser could be tanking in the parental department. Ever see "The Bad Seed"?

I find myself in the wimpy -- some would say negligent -- school of success and failure in parenting. I would like my children to be happy to be people not at all like their parents because their parents will love them no matter what they become (except animal rights activists). This comes pretty easily. I make a good-faith effort with manners, if only because it is expedient; I stroke and braid and chase and applaud. I cave and bark and put charts on the fridge. But my children often wear funny clothes and sometimes have stuff in their hair. Sometimes they spend an entire day in their pajamas, eating fruit leather and reading Archie comic books. Each has said at least once that she wished I wasn't her mother.

Which hurts. And I can be just as self-conscious and demanding as the next guy -- in secret. But I am successful if I find these ugly impulses overwhelmed by my other selfish wishes -- that my girls are loved, that they love me -- and muddle through with the golden rule, supplemented by my mother-in-law, who, conveniently, is a saint, and episodes of "The Simpsons," which my own mother smuggles into our house due to our lack of a TV.

It takes a village and mine, I'll admit, has more than one idiot. But this means that there is more than one person to blame if my children, God help me, begin to break into labs and set rhesus monkeys free in the dead of night. And I am as willing to share the credit as I am to share any blame. If my youngest says at the dinner table that she is grateful that some titmice have moved into the backyard bird house, I stifle my impulse to ask if they are real or implants and instead beam gratitude at my husband the birder. That my elder daughter will kiss a French bulldog on the lips is an endearing tendency that must be attributed to my father, the now-deceased veterinarian.

This is success, I figure, and I will take it in small and infrequent doses. Failure, meanwhile, will go unrecognized by me in my parenting lifetime. This is how I plan to survive, along with my children.