The stripper responds to "I dated a stripper." 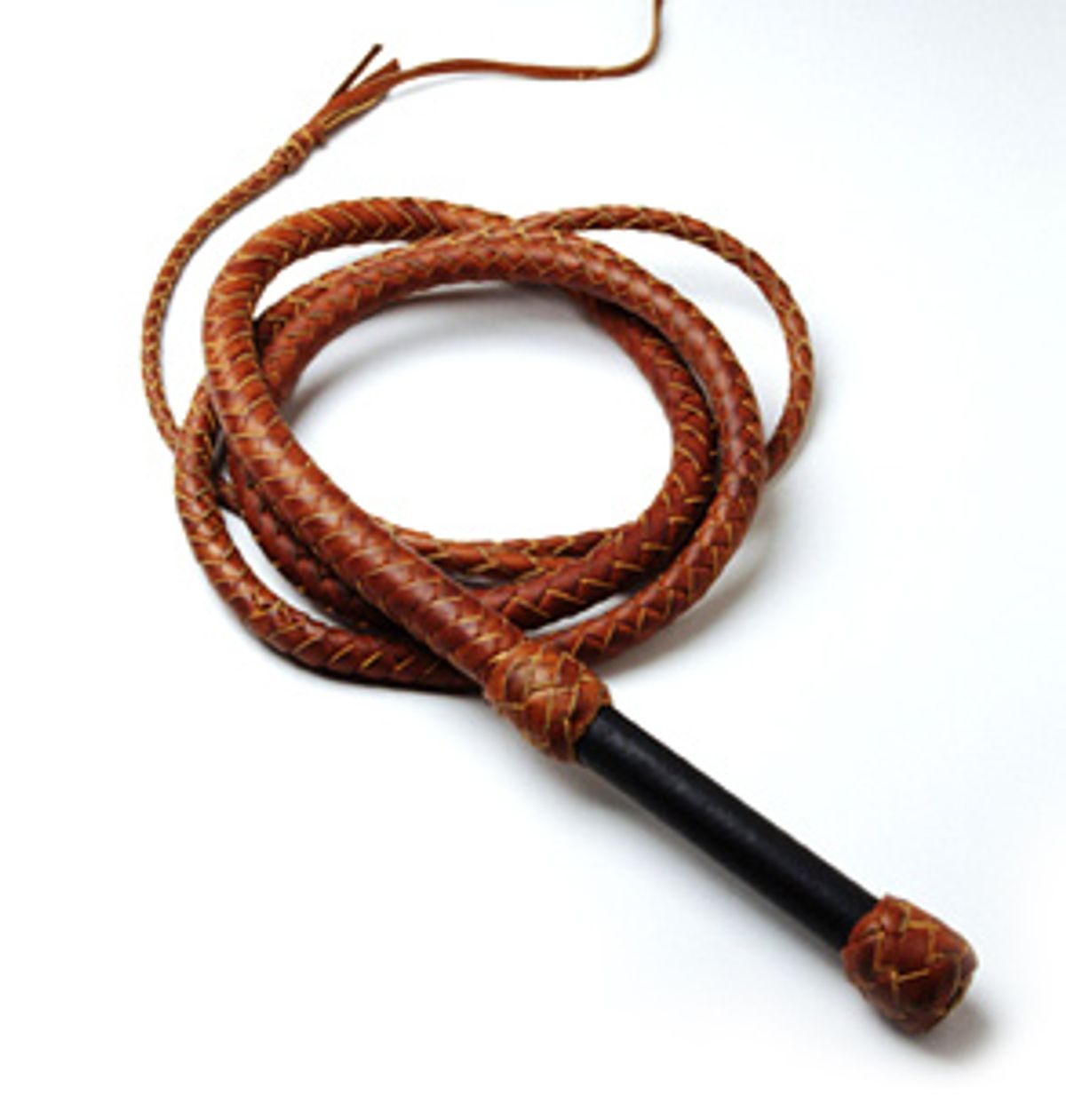 My initial conversations with Jay led me to believe that we had much in common: Jay enjoyed reading fine contemporary fiction, as did I. Furthermore, his sophistication appeared to encompass not only the academic but the sexual. Indeed, he seemed genuinely interested in and excited about my work in the sex industry. At last, I thought, I had found a man who was open-minded and confident enough to appreciate my intellectual as well as my physical endowments.

While my three previous boyfriends had been relatively well educated and very attractive, none had shared my enthusiasm for literature and other scholarly pursuits. Jay, a gawky ectomorph with slightly buck upper teeth, perpetually wet lips and a lush growth of back and shoulder hair, somehow convinced me that his academic leanings and intellectual prowess would more than compensate for his Don Knotts-meets-"Clan of the Cave Bear" mien.

After spending a week or so with Jay, I was chagrined to discover that despite having fine taste in literature, he almost never read for pleasure. Instead, he chose to ensconce himself in front of an oversize television, like an acolyte at High Mass, for two or three hours of mandatory prime-time programming each evening. On the rare occasion that he was forced to miss "Buffy," "Xena," "Felicity" or "Dawson's Creek" because of extraresidential social engagements, he made sure to tape them and spent Saturday reverentially "catching up." Having voluntarily given away my television years before in favor of more socially and intellectually rewarding activities (reciting Horace while lap-dancing, three-way sex with my fellow über-wenches as Plácido Domingo crooned "Che ... non m'inganna!"), I had assumed that Jay, a career academic, would share my disinterest in mass media. I was revolted not by the quality of Jay's chosen shows, some of which turned out to be quite well-written, but by the stupefying quantity of them.

Jay had other hobbies besides watching television. He had recently given up Dungeons & Dragons in favor of Magic, an elaborate card game that features an assortment of monsters, elves, dragons, spells, counterspells and other accouterments of the puerile fantasy genre. He spent hours organizing hundreds of cards into "powerful" decks that had the proper ratios of magical creatures, wizards and demons. He also attended Magic consortiums where he invariably exceeded the other participants' mean age by at least 12 years.

Such housebound pastimes could be excused, given Jay's numerous maladies. Wracked with a passel of allergies ranging from the lethal (nuts) to the merely annoying (pet hair, dust, smoke, sun, face creams) and plagued by insomnia, anxiety, chronic dyspepsia and (seriously) an inordinate dread of amusement parks, Jay could be compared to an adult sufferer of Munchausen by proxy. Despite this abecedarium of physical and psychological infirmities, Jay participated several times a month in karate workshops. He was ostensibly a black belt, but was so feeble that I could pin him with minimal effort. He dabbled in writing: goofy screenplays à la "There's Something About Mary" that starred -- you guessed it -- gawky, allergy-ridden antiheroes who fell in with troupes of benevolent sex sirens during the course of picaresque bumblings.

Last but not least, Jay liked pornography. At first I was impressed that Jay had what seemed to be a healthy interest in something of which most people pro forma disapproved. I soon learned that Jay's cinematic prurience bordered on the obsessive: His bedroom closet was a pornographic Library of Congress, containing hundreds of films arranged by category -- blonds, brunets, redheads, fellatio, big breasts, small breasts, medium breasts, sodomy, double penetration, gangbangs, girl-girl, girl-guy, latex, bondage and domination, shaved pudenda. Waist-high stacks of glossy publications, some of which dated back to Jay's early teen years, supplemented the collection of films. He also boasted several signed posters of his favorite actresses, who were zaftig, voluptuous blonds of the Nicky Tyler/P.J. Sparkks type.

I soon learned that if no physical female body happened to be available, Jay carefully chose the appropriate visual aids from his amply stocked closet and spent his post-prime-time hours engaging in onanistic pleasures on the stained and sagging couch. As the result of a sustained lack of interest in, or inability to sustain, normal social interaction, Jay spent most evenings masturbating to pornography and thus knew more about the sex industry than I, who had worked extremely closely, so to speak, with any number of its members for more than seven years. To my horror, I discovered that Jay's overzealous interest in me stemmed from his need to improve and expand his collection -- this time, with an animate entity.

At first I didn't mind playing the insatiably kinky smut-queen sex goddess. After all, it was a role with which I was well acquainted. Jay's efforts to satiate me physically often met with success (a success that was, to be sure, greatly exaggerated on his part), but his ever-increasing demands for full-dress performances of high-decibel shrieking and epileptic writhing were taking their toll on my schoolwork and social life.

None of my previous boyfriends had ever shown anything more than the most cursory interest in pornography, and generally owned nothing more sexually explicit than Playboy. I began to wonder if Jay's all-consuming fascination with X-rated entertainment was normal, and questioned various male friends and ex-boyfriends about their porn-watching habits. Most used the material during periods of celibacy, or enjoyed it for its kitsch factor.

Unfortunately, Jay's dearth of cultural refinement and taste manifested itself in other ways that, as someone who wished to lead a quasi-normal life away from the job, I could not disregard as harmless juvenile caprice. Although I was delighted to be dating someone who didn't find my distended pectoral enhancements abnormally large, I soon learned that Jay's breast fetish bordered on the ridiculous. He attempted to persuade me to augment them a second time, from a double D to a triple E or even an F cup -- transforming me, in effect, from Rubenesque glamour girl into sideshow freak.

On numerous occasions, Jay also tried to convince me to dye my hair platinum blond. I explained to him that the process would reduce my long dark hair to a short, broken straw-colored and textured mop and, in conjunction with my dark complexion and eyebrows and near-caricaturesque décolletage, give me the appearance of a Brazilian prostitute; he simply became all the more delighted at the prospect.

Jay often looked as if he was dressed by his mother, and I later found out she had bought a significant amount of the clothes in his wardrobe. I charitably engaged in some de rigueur sartorial editing on his behalf by disposing of and replacing several pairs of elastic-waisted pants and purchasing him some decent shoes, a jacket and some shirts.

Jay had several recommendations for me as well. Though the only outfit he bought me was a black latex-and-chain teddy with matching gloves, he frequently offered his advice and assistance with my quotidian wardrobe and makeup selections. Jay invariably deemed my attire far too conservative, encouraging me to wear the tightest and shortest clothing I possessed. He often requested that I spackle my face with a 2-inch-thick layer of foundation, seven colors of eye shadow and a particularly garish shade of red lipstick and don my work costumes -- skimpy pubic-hair miniskirts, leather bras and nosebleed high heels when we went out together. It didn't matter where were headed -- bars, movies, fast-food restaurants, weddings, funerals, camping in the outback.

His dream, though, was to parade me around in dangerous-looking black latex chain-mail-and-spike outfits that looked like they came straight out of a Sadian nightmare. It was a dream that I was soon to fulfill for him, but that ultimately signaled the demise of our mercifully brief tryst.

Jay had very few friends, and was often not on speaking terms with his writing partner, so in the space of a few weeks, he came to depend on me entirely for all social interaction. Knowing that he was new to the city, I brought him to several informal gatherings and parties. Jay refused to be separated from me for all but the briefest intervals, even insisting on accompanying me to the restroom. If I were to disengage from his tenacious clutches and set out on my own, he would almost immediately begin to cast woeful glances about and soon rise to envelop me once again in a clammy and anxious grasp like a giant hairy lovelorn cephalopod.

At a bondage-themed Valentine's Day party last year, to which I wore the latex outfit of Jay's fantasies, several friends commented on his lamprey-like attachment to me. I had invited throngs of sexy and voluptuous females, but Jay's sexual, social and emotional dependence had grown so morbid that not even a bevy of my scantily clad colleagues could sway him from his resolute aspiration to flank me the entire evening. Whenever he got close enough to lay a proprietary hand upon any of my prominently displayed secondary sexual characteristics, Jay attempted to exact revenge for my perceived negligence of him by extolling the carnal virtues of any woman in sight.

Contrary to provoking my jealousy, Jay's behavior at the party inspired only pity and disgust, not to mention quizzical glances from my friends. His gross atavisms that evening brought about the realization that, though he might possess an attractively sharp intellect, Jay was a socially retarded psychosexual shambles.

Jay speculates on the many reasons why I ended our relationship, proposing, for example, that I used his obsession with smut as an excuse to distance myself emotionally from him and thereby regain control of the relationship. But smut, and Jay's masturbatory infatuation with it, were only the most socially odious of his manifold defects. He patently refuses to face the most obvious reasons for my relatively swift departure: that I had no desire to spend the rest of my life as a living inflatable doll for a 30-year-old juvenile whose total absence of taste and style was exceeded only by his bent for emotional dependency. I came to my senses and escaped Jay's tangled skein of geekiness unscathed, save for a preternatural horror of bright red lipstick and fantasy role-playing games. In the immortal words of the long-suffering Canio in the finale of Ruggerio Leoncavallo's tragicomic opera "I Pagliacci," "La commedia é finita!"

Stacy Brumpkys is a pen name for a writer in Southern California.