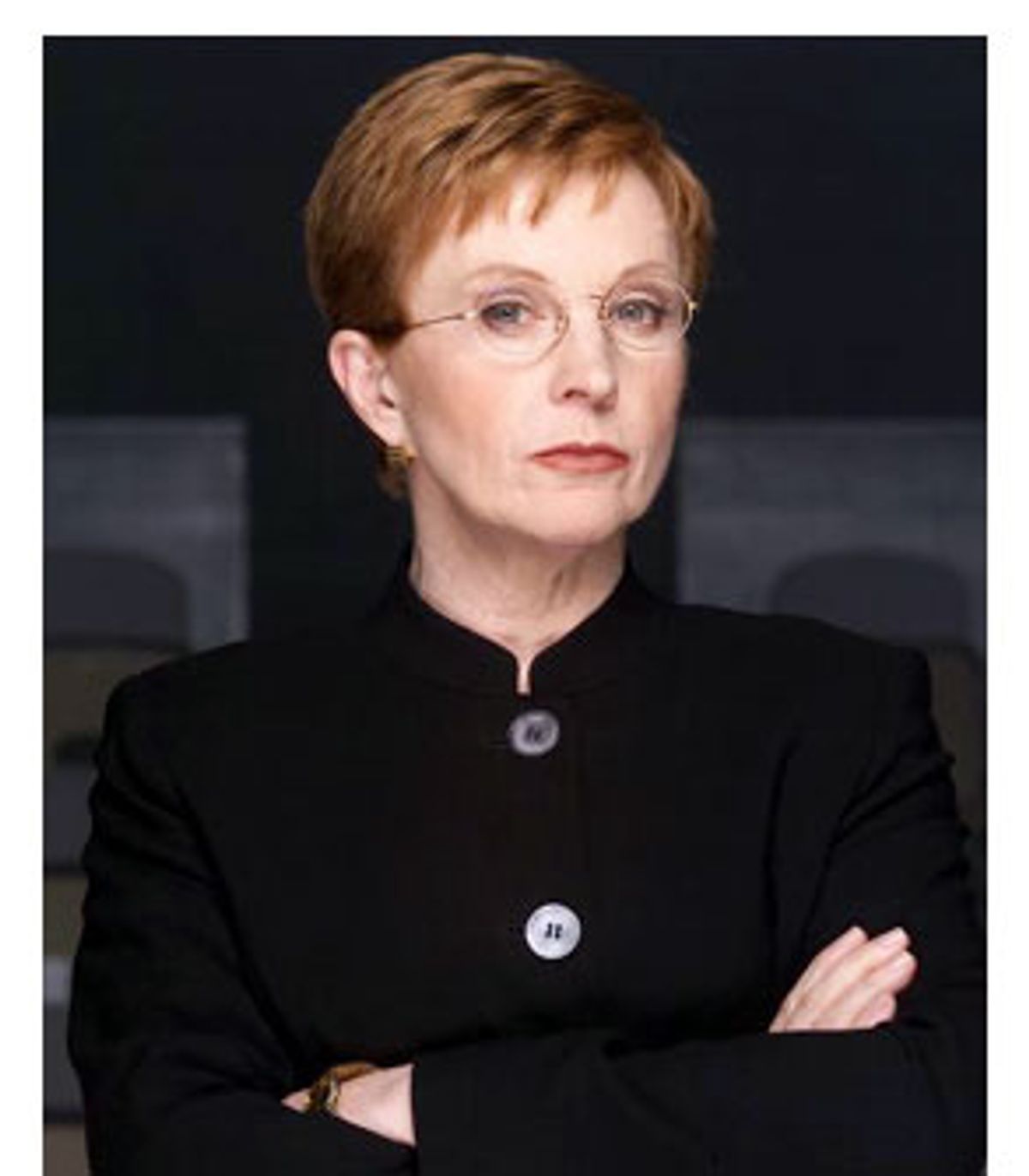 Anne Robinson is a bitch, and not in a good way. She isn't fun to hate, like Jerri on "Survivor: The Australian Outback." She isn't fun, period. Watching the affectedly severe British host of NBC's much-hyped new quiz show, "Weakest Link," use shame and ridicule to put down contestants' lack of intelligence, you feel like you're back in grade school, quaking at your desk as some bitter battle-ax of a teacher rips into the slowest kid in the class.

"Who is the poster child for incompetence?" Robinson sneers in her flutey, upper crust accent as the eight contestants flub answers and fail to rack up winnings. "Not a single question correct, Chuck," she sniffs to one contestant. "Is there any beginning to your knowledge?"

The contestants, who appear to have been coached to not bite back, stand there and look miserable. The audience, which appears to have been coached to side with the host, gasps appreciatively when Robinson launches a zinger. She doesn't smile. She wears black, sometimes leather, overcoats and her red hair is cropped in a no-nonsense Julie Andrews do. And she has a way of pronouncing the name of the show, throwing her whole body into it like a female softball pitcher letting one fly; it comes out sounding like "the ... WEAKESTLINK!" -- with an accent on the first syllable. She says it the same way, every time, which gets old pretty fast, given the fact that she said "the ... WEAKESTLINK" 36 times in the space of one hourlong show last week.

"Let's play 'the ... WEAKESTLINK!'" "Who will be 'the ... WEAKESTLINK?'" And of course, there's the polar chill of her signature line, with which she curtly dismisses losers from the show: "You ARE the ... WEAKESTLINK. Goodbye." Anne Robinson is a bitch and a scold, and sure it's all an act -- see how she winks and smiles ever so slightly when she says goodbye at each show's end? But after the thoroughly unpleasant exercise in public humiliation we've just witnessed, that wink is just creepy: Imagine Godzilla turning to the audience in midchomp and shrugging, "Whaddaya so afraid of? It's my shtick!"

The British version of "Weakest Link" may be a national passion, but when it comes to the Americanized import, I am not amused. Because it's one thing to have Robinson shaming and humiliating her countrymen, shame and humiliation being two of the cornerstones of the British boarding school education. But it is another thing entirely to watch her ridiculing American quiz show washouts.

We Americans are not accustomed to watching game show contestants being called idiots to their faces. We prefer to do the name-calling ourselves, from the privacy of our living rooms, when somebody on "Who Wants to Be a Millionaire" wipes out on the $200 question because he or she doesn't know how many blackbirds were baked in a pie.

We prefer Regis Philbin's supportive coddling, Alex Trebek's gravitas, even Jeff Probst's firm yet slightly apologetic "The tribe has spoken." We prefer to let our losers down easy in this democracy, where every kid who shows up to play gets a soccer trophy and you don't have to be a brainiac to be president. Yes! Yes! I know, this very publication has made sport of the flickering candlepower of our current chief executive. But we can do that: He may be a blockhead, but he's our blockhead. Robinson, though ... When she trains her haughty British cannons upon a contestant for not knowing an answer, or reads the questions verrry slowwwly for us dummies, it's like an assault on America's collective intelligence. This isn't entertainment, it's an international incident.

"Weakest Link" has some interesting game show mechanics, though. Eight contestants play as a team, answering questions in turn; the object is to build a chain of correct answers and pile up money. The winner takes all; the other seven players "leave with nothing," as Robinson keeps reminding them. The questions (supposedly dumbed down for the American version) are about the same difficulty level as the midrange ones on "Millionaire"; in fact, two questions on a special April 18 bonus edition of "Weakest Link" (What is the most prevalent element in the Earth's atmosphere? Which band does Flea play in?) were previous "Millionaire" questions. On "Weakest Link," however, the players don't get to use multiple choice or lifelines, which makes the game arguably harder.

But here's the gimmick: After each round, the players have to vote off the person they believe to be the weakest link -- think of "Survivor" with six tribal councils an episode. Yes, NBC has seen its Thursday lineup decimated by CBS's hit, and now it's payback time! And "Weakest Link" aims to be even more nasty and cutthroat than "Survivor" -- when only a few players are left, the not-so-smart links start ganging up on the smarter competition and voting them off, so a player is actually penalized in the end for knowing too much. (Actually, "Weakest Link" doesn't resemble "Survivor" or "Millionaire" as much as it recalls "Greed," Fox's crass, early "Millionaire" rip-off.)

Before each banishment, Robinson forces players to explain their votes, and the contestants say very nasty things about one another (again, coached, I bet). The voted-out player then has to take a "walk of shame" offstage through blinding white lights while the audience sits in silent judgment. Then, unlike the surprisingly gracious CBS castoffs in their postmortems, the "Weakest Link" losers whine to the camera about the players who voted them off. ("I'd like to see Eric go next. He's a vindictive little man.") "Weakest Link" makes "Survivor" look like a love-in.

NBC clearly intends "Weakest Link" to send a message to its competitors: Forget must-see TV; this is the new, reality-amped, smashmouth peacock! But the subtext is obvious: If you can't beat 'em, steal their biggest hits. NBC shot an alternate pilot of "Weakest Link" hosted by "Survivor" winner Richard Hatch (Hatch may end up hosting a daytime version of the show) and, last week, announced a special May sweeps celebrity edition of "Weakest Link" featuring stars of both "Survivor" series. That's just sad.

All the "Survivor" stunts in the world can't hide the fact that "Weakest Link" is a deeply flawed show. One of the reasons for the success of "Who Wants to Be a Millionaire," for instance, is that it's a different show every night, because it revolves as much around the personality of the contestant in the hot seat as it does around Regis. You get to know the players on "Millionaire"; you get to care about them. But the players on "Weakest Link" are only fodder for Robinson's pointless cruelty and acrid negativity. We learn almost nothing about them. Every episode looks the same; every batch of contestants is interchangeable and colorless.

And, jeez, the show isn't even any good as a view-at-home ego booster! Usually, we watch quiz shows to feel all smart and superior and smug when we know the answers and the bozos on TV don't. But Robinson gets in the way of our fun, because no one is smarter or more superior or more smug than she. She's a distraction. She's a downer. She needs to take lessons from our homegrown quiz show pointyhead, Ben Stein, about how to be droll and sarcastic but still, you know, human.

Despite the certainty of public humiliation and the paltriness of the prize money (while the top prize is $500,000, no one yet has even cracked $100,000), "Weakest Link" will probably never suffer from a shortage of eager contestants -- some people will do anything to get their mugs on TV. Still, you have to wonder about the long-lasting appeal, on both sides of the tube, of a quiz show where players have a 7 in 8 chance of going away empty-handed. "Weakest Link" is a show about losing, not winning.

Surprisingly (well, I'm surprised), "Weakest Link" is a hit; the three episodes that aired last week improved upon each other in the Nielsens, with Wednesday's outing ranking as the most-watched program of the night. Maybe Americans crave a new Dr. Laura to slap them around. Or maybe the show's popularity reflects our deep-rooted inferiority complex when it comes to all things British -- you know, everything sounds smarter and classier in a British accent. Imagine if "Weakest Link" were not a BBC export but a Fox original hosted by, say, Howard Stern, who quoted verbatim Robinson's put-downs. The Op-Ed page screeds about reality show exploitation and the decline of civility would be piling up before the show even premiered.

It's time to get over this England worship, people! Dump the tea in the harbor, and toss Anne Robinson, too. You're in the Colonies now, for cryin' out loud. It's OK to be stupid!