Here's to you, Ms. Robinson

I'm smitten with the host of "Weakest Link." 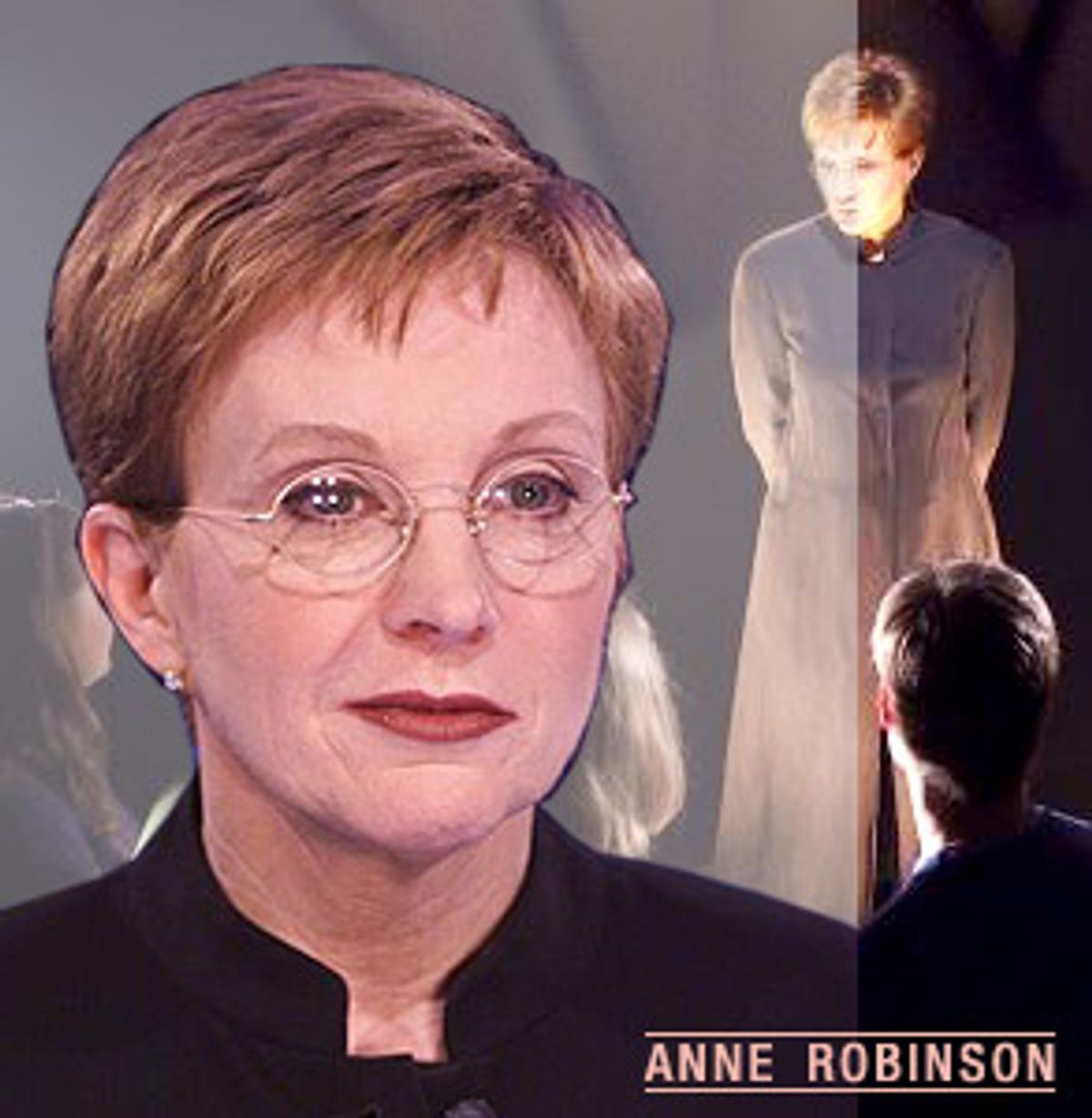 The reviews of NBC's game show "Weakest Link" have been mixed, but everyone agrees on one thing: The show's British host, Anne Robinson, is a bitch. She's a total bitch. And despite what the critics say -- that she's too mean, too British, too ruthless -- I adore her. And judging by the show's ratings so far, America is just as smitten with dear Ms. Robinson as I am.

Regardless of what you think of Robinson, she is clearly a pioneer on at least one front. As the first female host of a major network game show, Robinson is rewriting the role of women on game shows. Until now, women on game shows were relegated to bimbo status -- mere appendages to the host. Perhaps the most famous game show bitch is Vanna White, who has turned letters for Pat Sajak and show creator Merv Griffin since the beginning of time. (As a precursor to the dot-com layoffs, White's job appeared to be in jeopardy when the show switched to letters that merely needed to be touched instead of actually turned. Preparing to be downsized, White penned a number of books instructing women on how to crochet afghans, but alas, her "Wheel" responsibilities did not diminish.)

Bob Barker, host of CBS's long-running "The Price Is Right," pimps out his Barker Bimbettes every Monday through Friday. Some of these women have been with him ever since I was in elementary school. Can anyone actually name even one of them?

Much has also been made of her rudeness. Yes, Robinson is full of it. "Who is an embarrassment to the American educational system?" "Which village would like their idiot back?" And my favorite, delivered on the first episode to a personal trainer who answered every question incorrectly, "Who has spent too much time working on their body and not their brain?" She has reduced some of the contestants to tears, and critics have blasted her. I, on the other hand, have no sympathy for the contestants. They are given the opportunity to win vast amounts of money -- sums larger than 99 percent of this country will ever see in one lump payment. Given this extraordinary opportunity, it's not asking too much to make them sweat a little; they should have to earn it. Besides, the contestants on "Weakest Link" who are belittled by Robinson come out with more dignity and grace than, say, CBS's dullards on display on "Big Brother." Or any show on MTV for that matter.

If someone looking to win $1 million thinks Robinson is too mean, they certainly have other options. Like ABC's played-out "Millionaire." Plus, every state has a lottery these days.

And then there's the whole British factor. She's so smug, so uppity ... so British, the critics say. Again, they're wrong. Brought up in working-class Liverpool on a chicken farm, Robinson made herself a career in journalism and media, a feat that is infinitely more difficult in the stifling, class-conscious culture of England than in the United States. Robinson, I'd argue, is American. Publisher Penguin Putnam has already bought the rights to her bootstraps autobiography.

So three cheers to Ms. Robinson. Yes, she's a bitch. But she owns it. She is unapologetic, smart and sassy. She seems authentic and true to herself. Isn't this what Oprah and Cheryl Richardson try to teach us every day? You may not like her, but you must admire her style. I'll take Robinson over Regis any day.