A crusading novelist indicts America's libraries for destroying precious archives of newspapers and books -- and puts his own savings on the line to rescue them. 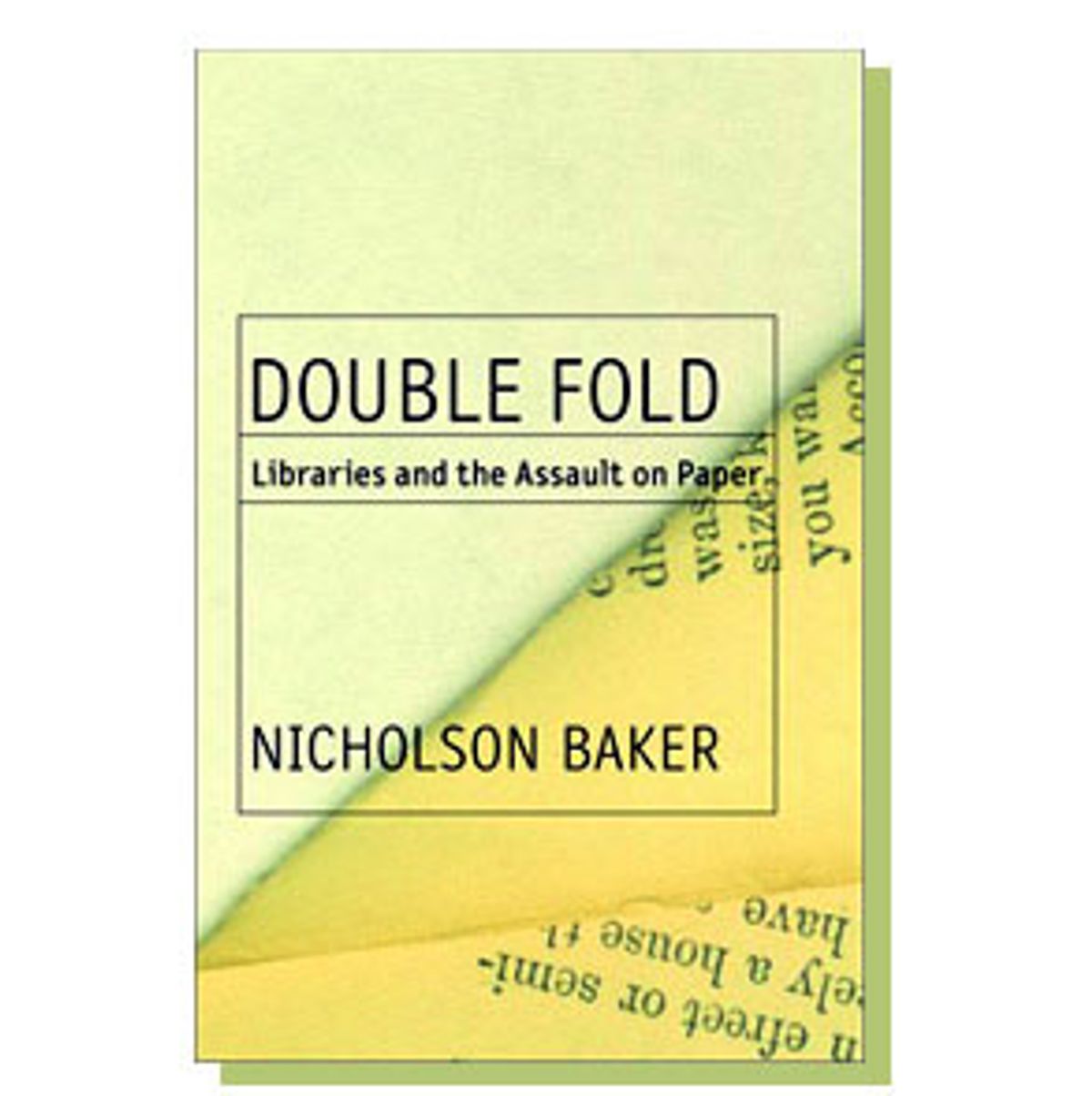 Anyone who cares passionately about anything -- it could be something as mundane as movies or as rarefied as, say, lighthouses or cactuses or antique kimonos -- has probably been told at one time or another, "Lighten up! You're taking it all too seriously." There's always an undercurrent of hostility to those words. Declaring a subject unimportant is a way for people to ease their own feelings of inadequacy, to make those who have bothered to care into the kooks, the aberrations.

That's why Nicholson Baker's exquisitely researched, gorgeously oddball "Double Fold" brought me to tears more than once: Among contemporary literature I've rarely read so passionate a book, and it's not just Baker's cause, the rescue from destruction of books and newspapers in our libraries, that got me. It's the way he's so willing, over and over again, to creep out on a limb, to risk readers' ridicule, taking them to and past the point where they are likely to say, "This guy just cares too much."

And Baker does care far beyond the realm of what might be considered normal, which is precisely the point. Some people (librarians especially) are sure to accuse Baker of being too heated, of not having enough distance from his subject to write a balanced treatise. To hell with that kind of balance. Baker gives us something much rarer. His passion is bound up in the very fibers of the pages; it's as concrete as the binding. Baker could have written a wholesome, boring, respectable tome about how the fate of the nation's books and newspapers hangs perilously in the balance. As it is, Baker's research is tireless and sound, and yet the tone of "Double Fold" is its own best argument: It's as close as a book can come to a living, breathing being.

Resolutely absorbing, "Double Fold" also reads like a spy novel. Baker cuts to the bone, layer by layer, of a secret tragedy that has been insidiously playing itself out in libraries across the nation since the 1950s. Claiming that they need to destroy in order to preserve, library administrators have been transferring newspapers and so-called brittle books to microfilm and other media and then destroying the originals. Why don't they keep the originals? Their chief excuse, as they squawk loudly and often throughout "Double Fold," is that they don't have the storage space.

Or, alternately, there isn't a storage problem at all, depending on whom you ask. "Oh, no, it wouldn't be the space," says Diane Kresh, formerly the head of the Library of Congress' Preservation Directorate, when Baker asks her why microfilmed newspapers were discarded. "It's the inherent vice of deteriorating paper, and particularly newsprint."

Baker has always been the sort of writer who builds strata of odd details; he's the guy who notices the little curlicue in the corner that everyone else misses. (In the introduction to "Double Fold" he begins his explanation of how the book came about like this: "In 1993, I decided to write some essays on trifling topics -- movie projectors, fingernail clippers, punctuation, and the history of the word 'lumber.'")

This time, as workmanlike as a carpenter, he dismantles the careless logic of those who have championed this devastation of our heritage. He starts out by shaving away at the commonly held theory that newspapers printed after 1870 -- the year in which American newspaper mills replaced stable, durable rag pulp with pulp made from ground wood -- are destined to turn to dust anyway ("any minute, soon, in a matter of a few years," Baker notes, quoting the various nebulous time estimates for when this disintegration will be complete). He tells of bogus aging-simulation tests performed on sample papers and describes the fervor of early microfilming enthusiasts, none of whom bothered to make sure that microfilm itself would provide a consistently readable record of a newspaper or book (in many, many cases it doesn't) or even if it would necessarily last longer than paper (Bummer! It doesn't).

One of those early enthusiasts was Verner Clapp, the No. 2 man at the Library of Congress in the postwar years, who dreamed of a day when microfilm machines would be "as natural and as essential as the tooth-brush, the ball-point pen, or as eyeglasses." Clapp, a former CIA operative, believed so strongly in microfilm that he didn't seem to care if it could actually be read or not. Baker observes that all the notes Clapp kept on microfilming were written on paper and are easily readable today. On the other hand, his CIA file, copied from microfilm, is barely legible. "The copy that the CIA sent me," Baker writes, "is poignantly stamped with the words BEST COPY AVAILABLE on almost every nearly indecipherable page."

Baker explains how he came to rescue (in other words, purchase), from the British Library's newspaper collection, a rare complete set of Joseph Pulitzer's World, an exceptionally beautiful late 19th century paper. ("Double Fold" includes a set of dashing color plates that give you a sense of the World's splendor. One of the plates also shows a color page rendered on microfilm: The illustration, gorgeous and finely detailed in the original, is reduced to a puddle of gray mud on microfilm.) Baker also stresses that his bound volumes of the World and other newspapers of a similar vintage are nowhere near close to disintegrating. You can still read them; you can still turn the pages.

Once so many libraries found themselves comfortable with the idea of destroying newspapers, they turned their attention to allegedly fragile books. The title of "Double Fold" comes from a test commonly used by librarians to determine a book's fragility. They see how many times they can fold and crease a page corner until it breaks off. But who, says Baker, reads a book this way? He pulls from his own shelf a book that he has greatly enjoyed (an 1893 edition of Edmund Gosse's "Questions at Issue") and devises his own test, opening the book to a middle page and turning it first back, and then forward, 400 times -- that's 399 times more than you'd turn that page in a single reading of the book. His conclusion? "'Questions at Issue' was (by definition) a very brittle book, if you compared it with brand-new paper, or old rag paper, but my ten minutes of research indicated that I would be able to read it four hundred times, which was plenty."

Baker explains the creepy doublespeak of "preservation" and "conservation," two terms that library administrators use interchangeably to bamboozle the public, even though they mean very different things. "Conservation" refers to the repair or restoration of the actual object; "preservation," although it may encompass conservation, has generally come to mean the transfer of a book's contents to another medium, such as a photocopy, microfilm, microfiche or a diskette. Baker spends a great deal of time with micropreservation zealots like Patricia Battin, head of the National Endowment for the Humanities' Commission on Preservation and Access, who clearly doesn't seem to care much whether the originals are preserved or not. Baker repeatedly quotes Battin's dramatic statements, which amount to thinly veiled scare tactics: "80 percent of the materials in our libraries are published on acid paper and will inevitably crumble. The Library of Congress alone reports that 77,000 volumes in its collections move each year from the 'endangered' state to brittleness and thence to crumbs."

"Thence to crumbs?" Baker asks -- a very good question. How many of us have actually seen or held a book that has been reduced to crumbs? Baker doesn't need to make the case that these people's arguments are based on loopy logic -- that's self-evident. Even more outlandish, Baker explains in detail, is a costly (and, for now at least, discontinued) Library of Congress project that involved the use of large quantities of a highly reactive substance called diethyl zinc to de-acidify books and thus keep them healthy. Just what is diethyl zinc? "For one thing," Baker says, "your nose would promptly burst into flame if you opened a test tube of it and took a sniff." If you read that in a James Bond novel, you'd call it preposterous.

Baker, polite but mule stubborn, goes about the business of gathering and presenting this information much as Jessica Mitford did in her muckraking exposi of the American funeral industry, "The American Way of Death." Musing on his conversation with the Library of Congress' Kresh about the "inherent vice of deteriorating paper" -- or was it the storage problem? -- he writes, "The library has spent huge sums on microfilming, and its preservation budget is more than eleven million dollars a year -- enough to buy, build, and outfit a warehouse the size of a Home Depot, which would hold a century of newsprint." The common-sense zinger comes next: "Are the library's senior managers really so grotesquely inept that they can't plan for the inevitable growth of the single most important hoard of human knowledge in this country?"

Does Baker care too much? The nation's high-profile library professionals probably think so. It's certain that, at the very least, they would just like him out of their hair.

The angle that makes "Double Fold" so extraordinary is that Baker isn't just criticizing from the sidelines. In August 1999, he received the list of American papers that the British Library was discarding; it would first offer the papers to interested libraries and nonprofit institutions and then sell off to private dealers anything that hadn't been claimed. In an effort to save the papers, Baker scrambled to form his own nonprofit organization, the American Newspaper Repository. The British Library refused to grant the papers; Baker would have to put bids on them, as if he were a private dealer.

And so he did. Putting up his own money, he was able to purchase the World and several other papers, but he lost a number of others, including the complete Chicago Tribune from 1888 to 1958, which went to a rare-newspaper dealer in Pennsylvania. With a combination of grant money and donations, he was able to acquire those papers as well. At his own expense he now stores those papers, along with the ones he purchased himself, in a warehouse in New Hampshire, where they will be accessible to scholars who need them.

The most telling exchange in "Double Fold" occurs near the beginning of the book, although its significance snaps into the clearest focus at the very end. Baker has made a trip to the warehouse of Historic Newspaper Archives Inc., in Rahway, N.J., a company that buys discarded bound volumes of newspapers and slices them apart to sell individual papers, through catalogs such as Miles Kimball or Hammacher Schlemmer, as keepsakes.

During his visit, Baker explains to Hy Gordon, the head of the company's archives, that it bothers him that so many libraries are effectively destroying history by getting rid of their bound newspapers.

"Don't be distressed," Gordon says. "There are a lot of things more important in life." By the time you've reached the last chapter of "Double Fold," where Baker baldly reveals that he and his wife put up their own retirement savings to rescue and house all those condemned newspapers, I defy you to name even one.