The wrong kind of black

Since high school, white liberals have told me that the authentic black experience is brutal and victimized. What does that make me? 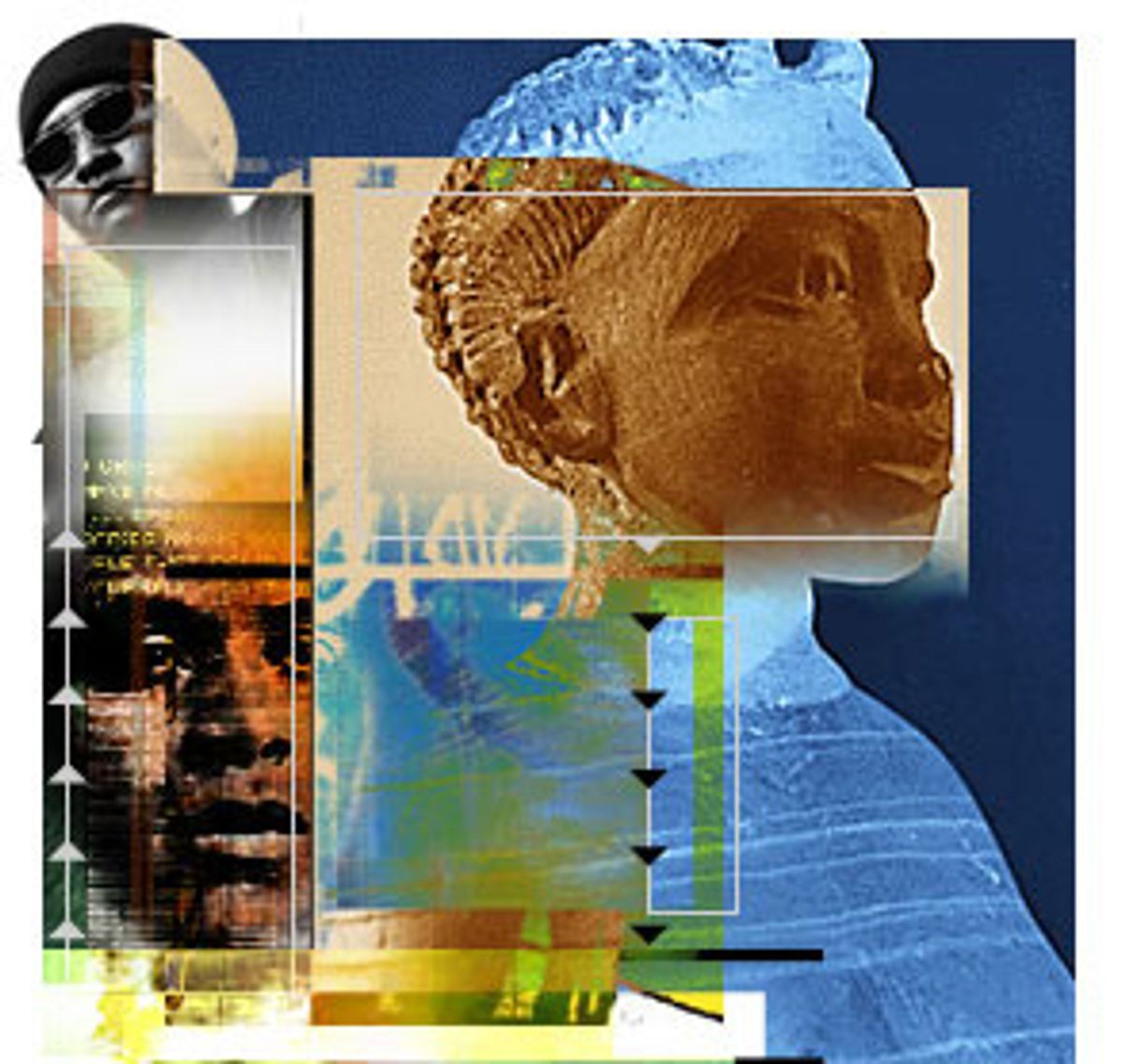 Mr. Swenson was a favorite English teacher among the collegebound, Advanced Placement students at Shaker Heights High School. He was a tall, lean man, with sandy brown hair that tumbled into his eyes when he spoke excitedly about Melville or Hemingway. He had an air of gentleness that engendered trust. He seemed like one of us.

He taught Advanced Placement American literature in my junior year and when I entered his class in the fall of 1976, there was, typically, only one other black student there, another female. That, too, was typical. But that's how it was, even in integrated schools like Shaker High; blacks just didn't take advanced classes. It was normal.

Nor did anybody question the fact that in the entire year of studying American literature, the class was not assigned a single book by a black author.

About midyear we were given an assignment in which we could write on a topic of our choice and read one of two books -- one was by a white author, the other was "Native Son" by Richard Wright. I had enjoyed Wright's novel "Black Boy," which I'd read independently, so I chose "Native Son." I was the only student in the class to do so.

For a teenage black girl thirsting for some reflection of her own reality in literature, "Native Son" was a disaster. I was outraged by the story of Bigger Thomas, who kills two women in the novel, and is executed. I had some difficulty writing the essay, which I mentioned to my friend Ruth. Our friendship was rare in a high school where racial boundaries were rarely crossed, but she was from a liberal Jewish family for whom my race was not an issue. With Ruth, no topic was beyond debate. We discussed everything: race, books, boys and our impending literary greatness. She told me something I didn't know: The essays would be used to determine who in our class would be invited to compete in a national writing contest. She suggested that I discuss my writer's block with Mr. Swenson.

I delivered my conclusions in dramatic fashion to Mr. Swenson the next day. "The book is full of stereotypes; there is no context to Bigger's murdering rampage, no motivation for his brutality. Bigger Thomas is a caricature."

Mr. Swenson grimaced and I thought he understood my frustration. Then he said: "Don't you know what it's like in the ghetto? Don't you have any idea what it means to be black in America?"

I blinked, floored by the sheer absurdity of the question. Mister Rogers was telling me that I didn't know what was going on in my neighborhood. Like he did.

I told him that of the many blacks I'd known who were from the ghetto, exactly none had become double murderers. Doctors and lawyers and teachers, I knew, along with funeral directors, musicians and librarians, but not one homicidal maniac. I laughed, this seemed so obvious. We stared at each other, each of us convinced that the other was unreachable.

To Mr. Swenson, "Native Son" represented the entirety of black experience, a story of unexpurgated violence and tragedy. How did he see me then, brimming as I was at 15, with the expectation of having it all? A mutation probably. Doomed to be a genetic blip on a black screen. As my Advanced Placement modern European history teacher predicted, "Keep getting those A's my dear, and you'll never get married."

I walked down the hall chuckling ("Doomed, I'm doomed") when Ruth came up accompanied by Peter, her latest crush, and asked how my conference had gone. Not waiting for my answer, she beamed at Peter, "Isn't Mr. Swenson the greatest?" Peter nodded soberly.

Eventually, I handed in my paper on Bigger Thomas. I wasn't picked to participate in the English contest, but I had kind of expected that. That honor went to Ruth and Peter. They both won.

Through the years, I have often recalled my conversation with Mr. Swenson. In the late '70s, black culture in white classrooms was reduced to one novel, or one historical event -- slavery -- that held up black people as victims and their experience as one of unrelieved degradation.

Although black culture today is accorded more respect, the tendency to view blacks principally as victims persists. It is part of the symbiosis of white and black cultures, in which the belief is asserted (by whites) and internalized and acted out (by blacks) that black suffering is "authentic" and black success is "selling out."

It's like the call and response that I imagine might have been echoed between an overseer and his slaves, or that which a sergeant and his new recruits might share. The call is "You are doomed, oh yes you are," and the response is "We are doomed, we sure 'nuf are."

Over time, this call and response becomes a silent racial dynamic: The rhythm comforts and the words hypnotize and black students succumb to the Pied Piper's lure of low achievement. In doing so they are answering the call not of black authenticity, as they often believe, but of white racism.

At Harvard College I remember a bitter argument with a Jamaican student who told me that to understand the black experience, I had to be poor. In effect, he was telling me the same thing that Mr. Swenson had: Without failure -- because that's what poverty is in this society -- you are not black. Our identity lies in our powerlessness. Success makes you something other than black -- but not white. And over the years it has surprised me less that, perceiving this, many young blacks choose hell over purgatory. It's still a shame, though, because it keeps black talent mired in low standards, which become low expectations, and the cycle continues.

Recently, a young black mother, educated at MIT, reassured me as our children played in the park that the public schools in our integrated town, Montclair, N.J., were much better than those in New York City. I laughed, "That's like saying purgatory is better than hell."

Her response floored me: "Well, it is," she said.

We do not even think of heaven, much less reach for it.

In the mid-1980s, I attended Harvard Law School, and I remember an impromptu gathering of black students to watch the new, controversial "The Cosby Show." Afterward, one woman proclaimed the show "unrealistic" because the mother had bought her daughter a new dress for a party. Others disagreed.

"Now, you know black people be buyin' a new outfit for a party, whether they have the money or not," someone shouted to general laughter.

I believe that the source of the woman's objection was not that Clair Huxtable had bought her daughter a party dress, but that the Huxtables were a functioning black family, portrayed in celebration and not in crisis. This woman's understanding was that this was, simply, impossible.

Over time black culture has become more enamored of black oppression than of the struggle against it. Black oppression is an important part of our history -- not to be denied or apologized for -- but I've learned it's not the whole story. Our successes have too often been overlooked, hidden in the lush tapestry of suffering that seems to pacify blacks and reassure whites.

As a law student, I attended a class in civil rights law taught by a black professor, Randall Kennedy. One day, visibly upset, he informed the class that a new book that listed the most influential lawyers of the 20th century failed to mention Thurgood Marshall, the legal architect of the civil rights movement. The class fell silent, shocked by the monumentality of the oversight.

Mainstream white culture has always circumscribed what black culture is, and often blacks have bought into this narrow version that celebrates failure and delegitimizes or ignores black success, frustrating it when possible.

Ten years after graduating from high school, I was planning my wedding when I again had occasion to reflect on my conversation with Mr. Swenson. Ruth flew in from Europe and we went for a fitting of her bridesmaid's dress. Afterward at a cafe, she told me that my paper on Bigger Thomas had impressed Mr. Swenson after all. But there were only two spots for the competition. Ruth was in. So it came down to Peter or me. Mr. Swenson had asked Ruth to choose. Ruth explained that while she knew I was the better writer, she was in love with Peter. She hoped I could understand.

"I do indeed. You got to cozy up with Mr. No Talent and Swenson got to keep his contest an all-white affair. And there was no racism involved because the person who made the decision, the love-starved, 16-year-old girl who was permitted to decide, was reputedly a friend of mine." I hissed, "Yes, I understand."

Ruth reddened. She was an avowed feminist and she'd held onto this because she was genuinely ashamed. I stared at the foam on my cappuccino, which had nearly sunk into the espresso beneath, and took a sip. Still bitter. I wondered if she could ever understand that I was as much in love with the idea of being in that contest as she had been with Peter. Probably more. But I just said: "I could have won, you know."

She snapped, "It seems to me you did just fine." Then she looked away.

I surveyed my past and future. Mr Swenson hadn't stopped me then, and he surely couldn't stop me now. Not without my cooperation. So I said: "You know, you're absolutely right." I tore open two packets of Equal and poured them in my cup, laughing. It all seemed so terribly obvious. "What matters is, now I know the whole story."