Abortion rights advocates get clobbered by pro-life groups as the Unborn Victims of Violence Act advances in Congress. 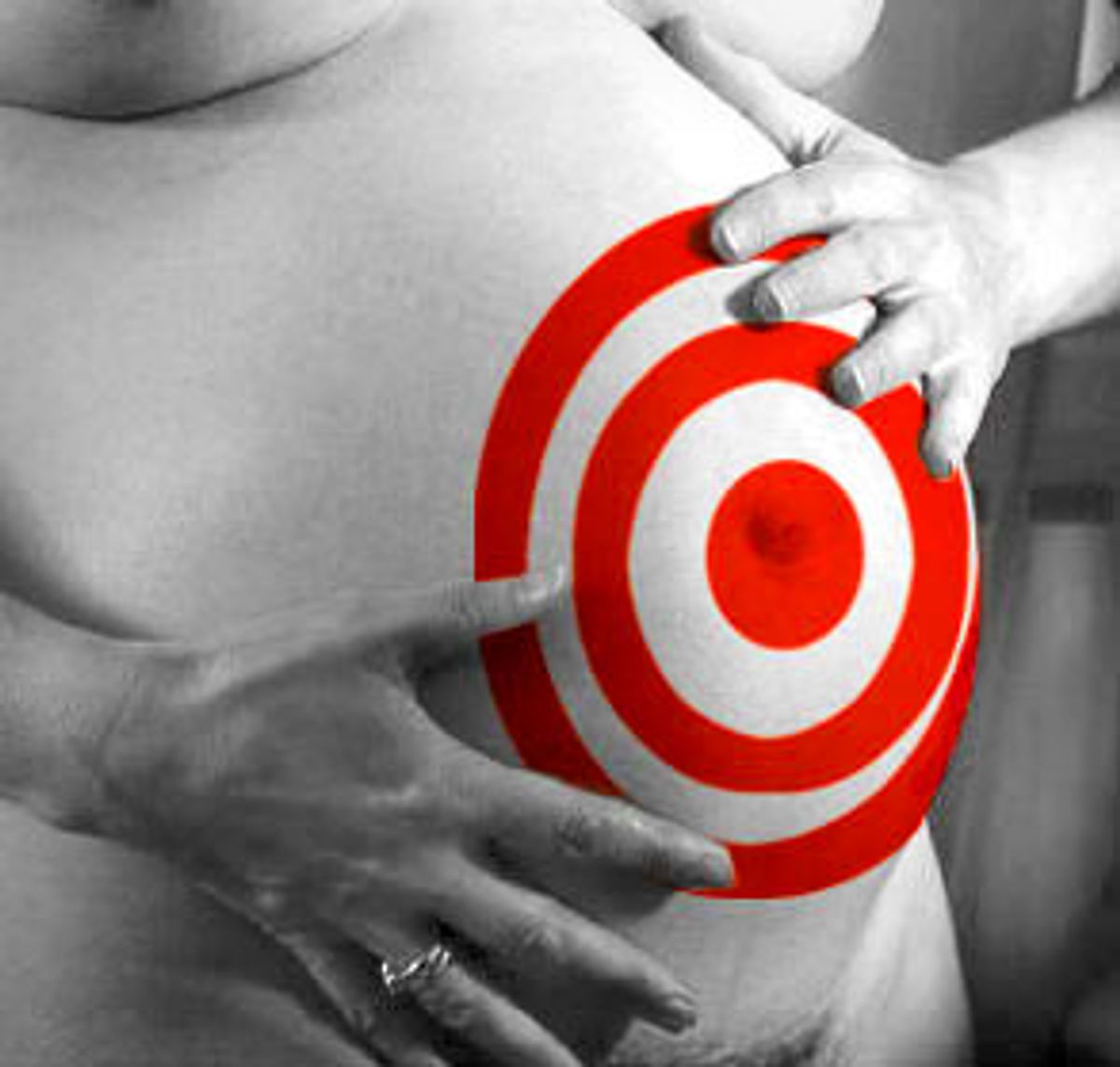 On Thursday, anti-abortion forces won a battle in the ongoing legal, political and rhetorical war over choice, when the House of Representatives passed the Unborn Victims of Violence Act 252 to 172, with 53 Democrats signing on.

The bill makes it a federal crime to harm a fetus during an assault on a pregnant woman. Pro-choice and women's rights groups backed an alternative measure that would have extended the same additional criminal penalties for crimes against pregnant women, but by establishing special compensation for the woman, not by designating the fetus as a separate victim. That amendment, sponsored by Rep. Zoe Lofgren, D-Calif., was rejected, with conservatives insisting on the moral imperative of treating the fetus as a victim.

"This is not an abortion bill," insisted House Judiciary Committee chairman James F. Sensenbrenner, R-Wis., adding that "killing an unborn child should be prosecuted to the fullest extent of the law."

While it's true that the bill does not address abortion specifically, it firmly establishes special protections for a fetus or zygote, defining it as a separate person.

In a statement on the House floor, Majority Whip Tom DeLay, R-Texas, urged members to oppose the Lofgren amendment "because it fails to acknowledge that when unborn children are killed, they have been murdered. Life and death should not be subsumed beneath a semantic fog."

This is part of the one-two punch rhetorical strategy of pro-lifers: The first is to appear to rise above the long, messy debate over abortion, with all its moral quandaries and unsettling emotions. The next is to throw that emotional hand grenade back at any wavering, squeamish, nominally pro-choice members of Congress.

Rep. Henry Hyde, R-Ill., summoned the image of "the little battered body of the unborn child. You won't even call him a victim," he chastised the bill's opponents. "I cannot imagine a more extreme position than to deny the humanity of an unborn child."

The House debate was packed with heart-wrenching stories of pregnant women who had been attacked, some by husbands or boyfriends who wanted to end their pregnancies. And yet domestic violence groups strongly oppose the Unborn Victims of Violence Act, and point out the same people putting it forward are the ones who have proposed in the 2001 budget to fund Violence Against Women Act programs at $200 million short of the amounts authorized last year, reducing local funding used to prosecute abusers to the lowest level in four years. But despite their efforts, women's groups have so far not managed to dispel the bill's proponents' insistence that it protects rather than restricts women's rights.

And once again, pro-choice groups find themselves on the defensive in a rhetorical battle with the right. Self-described pro-life groups have set the terms of the debate in such an emotionally loaded and legally confusing way that the women's movement is left scrambling to combat it.

"Our strategy is just to put our energy into making sure it doesn't pass the Senate," said Louise Melling, associate director of the ACLU's Reproductive Freedom project. "We have a shot there, and we're going to put our resources into making sure that folks on the Senate side understand that this [legislation] is unnecessary and ill-advised."

Eleanor Smeal of the Feminist Majority Foundation is optimistic that the pro-choice groups can get support in the Senate to keep the bill from being passed. "We don't have the House -- the House of Representatives is not representative of women, there are so few women in it. It is in the Senate that we must make the major stands."

In fact, an alliance of pro-choice groups including the National Organization for Women and the National Abortion and Reproductive Rights Action League will make a special effort in the next few days to lobby Senate Democrats -- only part of the larger, longer campaign to preserve the right to abortion under the Bush administration.

Early on in the administration it became clear that the strategy among anti-abortion groups would be a skillful and indirect one. With a majority of voters still supporting Roe vs. Wade, they have tried to reduce access to legal abortion by incremental means, biding time until one of the three Supreme Court justices expected to retire this term makes way for an anti-abortion justice who might be able to take on the decision directly. The bill passed Thursday in the House is, opponents say, part of this strategy.

"It is, without question, a public information challenge," says Joan Coombs, senior vice president of Planned Parenthood. Though it was cloaked in language that seemed to be about protecting women from violence, "nowhere in the bill is there anything about the harm to the woman resulting from the involuntary termination of a pregnancy."

In fact, she says, the bill is part of a "campaign to change the rhetoric" and establish the fetus as a person. "When they refer to a fertilized egg as a child and somehow keep hammering away at that, even some elected officials are confused, and certainly the public is confused." The goal, Coombs says, is part of a "very careful, incremental campaign to overturn Roe and make abortion illegal."

And while the public and members of Congress may be moved by the law's apparent attempt to grapple with the loss of an unborn child, changing the definition of personhood has legal implications that could help unravel Roe. "Our strategy is to make sure that the senators whose records make it clear that they understand choice understand that a federal statute that establishes a fertilized egg as a person is in absolute conflict with a woman's right to choose," Coombs insists.

Already, 39 states have laws attaching special punishment when a fetus is harmed during an assault on a pregnant woman, with 28 of them treating the fetus as a separate victim, depending on its stage of development.

Vivien Labaton, director of the Third Wave Foundation, which reaches out to younger women, laments the fact that "the pro-choice community is responding to terms that were set by the pro-life community that advanced forward this agenda." Once again, the right is evoking gut-wrenching images of babies, motherhood and loss, while abortion-rights defenders are left talking in terms of "choice" and "personhood."

Labaton notes that the right has always been successful in using language that gets a visceral response from the public -- a tactic the pro-choice community could learn from. "We need to get the correct information to young women and young men, but we need to talk about these issues in a way that resonates with young people. I think that that's something we need to get better at."

One problem with public information campaigns is that the language they use can be rather wonky. "Young women talk about pregnancy, they talk about abortion, they talk about condoms, they talk about sex; they don't use terms like reproductive rights, family planning, contraception access. There's sort of a disconnect in terms of getting that message then to young women who are affected by those issues."

Smeal of the Feminist Majority Foundation has been involved in the fight for abortion rights since before Roe vs. Wade was decided. Having fought to reinstate the Violence Against Women Act, funding for which has just been gutted, she is angry about the way the Unborn Victims of Violence Act was framed as a protection for women. "The hypocrisy just drives you crazy," she says.

Despite the incremental approach anti-abortion proponents are taking, it's most important, she says, to keep focused on Roe vs. Wade. "All of these are steps to the big one, and we've got to keep it very clear in people's eyes that if there is a resignation from the Supreme Court, we must demand that the person who is appointed by Bush answer the question where they stand on Roe vs. Wade, if they think it was rightly decided. We have a right to know, and [Bush] doesn't have a mandate to pack the court against Roe."

Before that day comes, Smeal is determined to get the word out and drum up support for a filibuster in Congress to block such an appointment. The Feminist Majority Foundation has launched a Web site, million4Roe.com, to gear up for the inevitable battle.

"One of the things that's been very difficult for our side is that people really don't think you can reverse Roe vs. Wade," Smeal notes. "Poll after poll says that not only young people but most people do not think that it can be reversed. Unfortunately people don't understand that it's a Supreme Court decision. They just know the culture and they know how needed it is, and they can't believe that anybody would do it. One of the things that Bush had going for him was this disbelief."

Coombs agrees that the legislation is part of a larger effort by the administration to lay the groundwork for a Supreme Court appointment. "The real focus of this exercise, in addition to establishing the fetus as a person, is to change people's perception, to change how people think about it. If you have the language out there, and you change the legal terminology, and you change the climate so that if the day comes that, heaven forbid, George W. Bush is able to fill a vacancy on the Supreme Court with someone who does not support Roe vs. Wade, you have changed the climate to accept the overturn of Roe vs. Wade."

Just as public pressure influenced Bush to push back on certain environmental positions in recent days, Smeal hopes public pressure will force similar caution on abortion -- eventually. "We are going to fight all of these incremental things; they're not going to get a pass. We think that people will know exactly what's going on, so they can't hope that they're going to sneak this through."