Violence may follow her, but so does everything else. Iceland's greatest export is taking us to the verge. 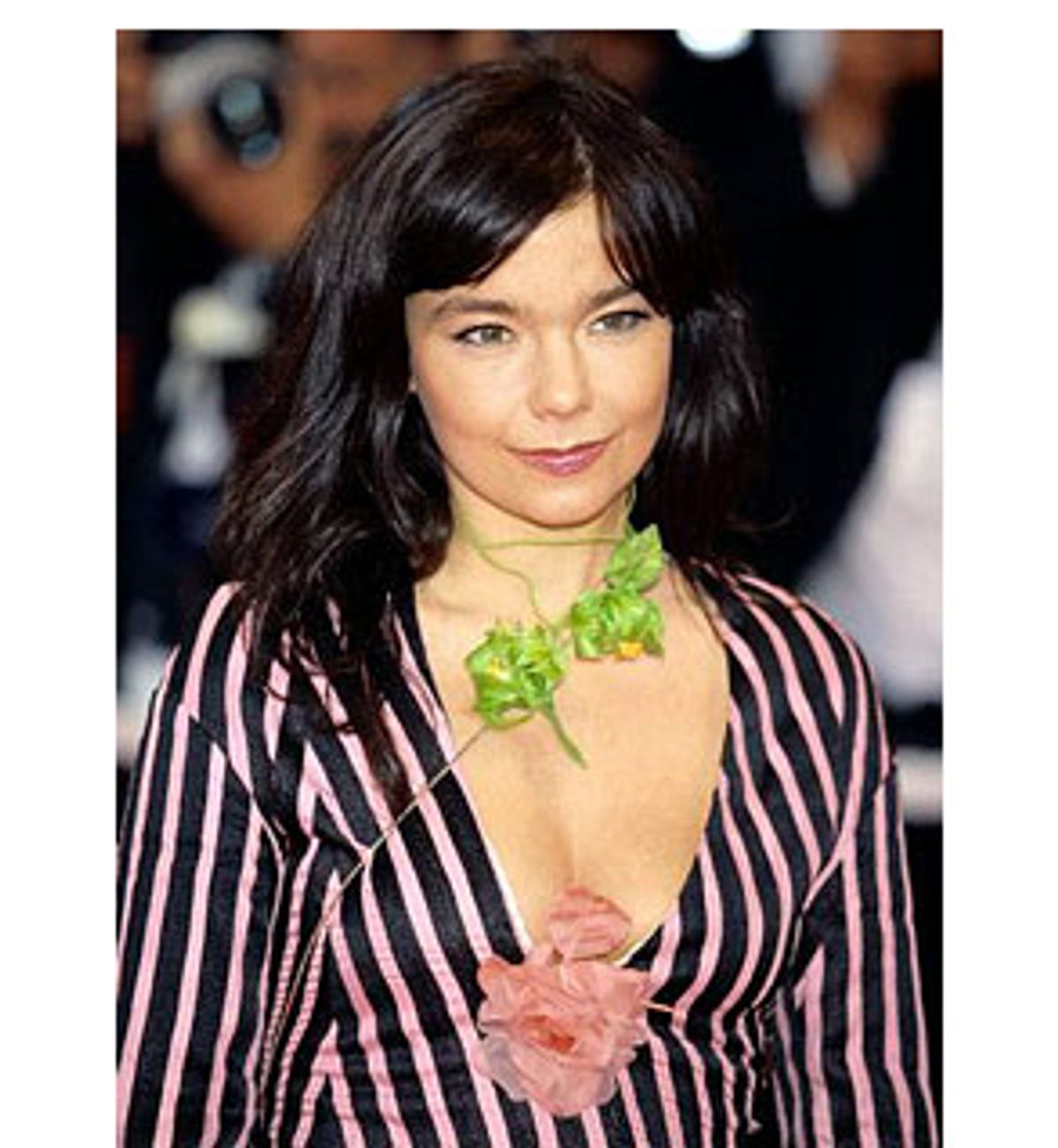 Talking about Björk, we find ourselves on the verge of medium-size changes. We're rethinking our country, our moves, our hairstyle. What if we moved to Iceland, or even arranged it so we came from there? we're asking. What if we remixed things? We could quit our jobs and wear swan clothes. She's moved people to do stranger things, after all: One man tried to kill her, and another -- her prime minister -- tried to give her an island.

Björk, too, is verging. She has a lean to her, a tilt that makes us want to turn the music up or off, write her the kind of letter that would pause her just a moment. We want to catch up and relate. It's the frustrating, great compulsion that all famous people both smart and busy seem to provoke.

Nobody has us dancing to weirder music -- with new musicians, it's usually dancing or weird, not both -- than Björk. (It's not the kind of dancing that gets you a date. You do it in your living room, curtains down.) The persistent novelty of her sound and personality has gotten the Icelandic singer/arranger stuck in our notions of new, and we can't even hum more than a measure of her work. Björk belongs to that genre of musician that makes you feel genuinely odd. In 50 years, we will all talk about where we were when we heard that first song.

Before her recent and biggest fame -- she verged on making the Oscars different, verged on making Lars von Trier's film "Dancer in the Dark" tolerable -- and before the steady, measured ascent that preceded that, Björk Gudmundsdottir was a girl among eight adults on a purple commune in Reykjavik.

She lived a long, quiet life there until she was 11, at which point she decided things were too slow and she'd become a great singer. So she did. With five years of music school under her belt, she entered a contest in 1977 and won a record contract. Her stepfather played guitar on the album, and it was soon a hit. Listen to her translation of "Fool on the Hill" -- it's the cutest Icelandic cover of a Beatles tune you'll hear.

She was precocious and lovable, and the record company positioned her to be a child star, Iceland's own Jackson 5 squeezed into a Gudmundsdottir 1. Instead, the 11-year-old, who comes from a working-class family, said no thank you. She slipped back out of the spotlight and stayed away for years.

As Björk describes it, her adolescent years were a saturation of Hendrix and Cream. She registered her boredom by leaving home and joining a punk band at 15. (Her parents probably saw it coming: At 7 or 8, she approached the adults in the commune and asked, "Why don't you stand up and do something?") She joined several bands over the next few years, worked at a fish factory and a Coca-Cola bottling plant and finally met the friends who would become her ticket out of Iceland. On a summer day in 1986, she gave birth to her son, Sindri. That evening she formed the Sugarcubes.

It was a hobby, she says of the internationally successful edgy guitar band. They offered a refrain heard from a lot of good young bands: We can't believe we're making it. Apparently by accident, the Sugarcubes informed the world that Iceland, in fact, existed, and that it could produce a hit pop record. It could even do so while one of the singers tended to her young son. There were MTV videos and extensive tours.

When Björk left the band in 1992 -- no major drama, it's just that six years was enough -- she got more deliberate. She left Iceland for London, and arty rock for techno and dance music. Her first solo album since childhood, "Debut," came out in 1993 and went gold in the United States. She was 28.

The next album came out in 1995. It was called "Post," supposedly because the songs are letters from London to Iceland. They combine techno with guitar with weird instruments (all elegantly, too: Play wine glasses on one of her albums and you won't look foolish). Björk saves tiring genres from themselves by mixing them into others, then sews it all up with her macho bellowing and breathy lilting.

"Most bands try to imitate others," "Ren & Stimpy" creator John Kricfalusi told Paper magazine. Kricfalusi directed her animated video for "I Miss You." "But Björk is as original as Elvis -- and she's got a cuter groin thrust."

She was suddenly everywhere, and was still trying to find the time to be as creative as usual. (Some Björk experts say she recorded the vocals for "Possibly Maybe," off the "Post" album, nude, standing in water, in a cave in the Bahamas. As the story goes, an extra-long microphone cord was used. Bats from the cave, if you believe the story, can be heard swarming around her.) She was too good and too busy to not become a full-fledged celebrity, and it soon caught up with her.

It takes a lot of great songs to live down an assault on a journalist. Nobody's quite forgotten Björk's 1996 attack on a TV reporter at an airport in Thailand. It was a turning point that came at a turning point: More and more, the media wanted a piece of her, and when they couldn't get enough, they turned, at least on this one day, to her 10-year-old son.

Björk had requested in advance that the press leave her and Sindri alone in Thailand until her press conference. When she arrived at the airport, she was surrounded by cameras. As Björk tried to get away, Julie Kaufman, a reporter from a cable TV station, approached Sindri and said, "Welcome to Bangkok!"

Björk lunged at Kaufman, dragging her to the floor and knocking her head against the concrete several times before security pulled her off. Later a mortified Björk apologized and Kaufman chose not to sue. The reporter allegedly turned down an offer to do an ad for a hairspray company -- whose product was strong enough to withstand Björk's fury. The singer's reputation as an unbalanced brute was cemented.

The year got worse before it got better. A 24-year-old Miami fan, in love and enraged that Björk was then dating a black man, filmed himself building an acid bomb inside a hollowed-out book. The man, Ricardo Lopez, mailed the package to her London home, shaved, put a Björk song on the stereo and took his head off with a pistol. Police intercepted the bomb before it got to Björk's home. Shocked, Björk took Sindri to Spain -- after sending flowers and a card to the dead man's parents.

She recuperated. There's an aura of integrity at her center -- think of a Space Age Bruce Springsteen in tights -- that seems to let her actually work things out in her songs, the way nonfamous musicians have done for ages. And she's smart, too. When "Homogenic" came out in 1997, it was shocking to hear someone so weird be so articulate. "I thought I could organize freedom," she sings in "Hunter." "How Scandinavian of me."

If Björk is on the verge of something -- if she's permanently liminal -- her music is too. It's not too complicated to enjoy on the first listen, but sit down with a guitar to copy it and nothing really happens. Her songs are too odd to reproduce.

In one, it's Broadway. In another, the bass rattles the floor under the speakers. In another, the guitar slips gently through an arpeggio like down a glacier, and meanwhile a decent dance beat keeps you moving. The whole thing happens behind a gentle old fuzz, like this futuristic music was actually recorded a hundred years ago.

There are references in her songs, and not the parlor-trick variety. She plays earnestly with crescendos, for example: If Led Zeppelin's were sex -- buildup, buildup, buildup, guitar solo! -- hers are sex interrupted, or the walk home afterward. In the decadent, run-down old mansion of rock music, Björk has her head stuck way out the window, and appears to be planning either escape or renovation.

She's been way out the window forever. Hear that bracing pause 25 years ago, halfway through her "Fool on the Hill" rendition, between verses, just before she belts out, "Oh oh oh!" Musically, the cover is fairly faithful to the original, but in this one moment she waits just a little longer than the Beatles did; it's the most thoughtful, richest silence an 11-year-old has ever committed.

Lopez was on to something: People like her urgently. It's the kind of haste that follows anyone too frenetic to keep up with. Luckily the haste is usually generous. Once she almost got an island.

"Björk has done more for the popularity of Iceland than most other Icelanders," Icelandic Prime Minister David Oddsson told parliament last year. "My view is that she may be given the use of this island as a royalty payment, as recognition from the state."

Another thing that comes up is the occasional child in her. Or maybe it's the occasional adult in her. It's a compliment when it's said, a way of explaining that she's pure and unspoiled. But patronization aside, it's imprecise. Imprecision is dangerous in the world of music, where too many stars are man-children and yet give us the opposite of this so-called kidlike purity.

"I don't like in-between stuff," she has said more than once, and she's right. She's on the border or she's nothing at all. All brilliance is off the grid, but with Björk, the grid's so far gone that she's building a new one. It's loud and passionate and sleek, the kind of grid that deserves an island.