Days of women and silence

Living in a convent is an unusual choice for a student, but isn't every life a bit unusual? 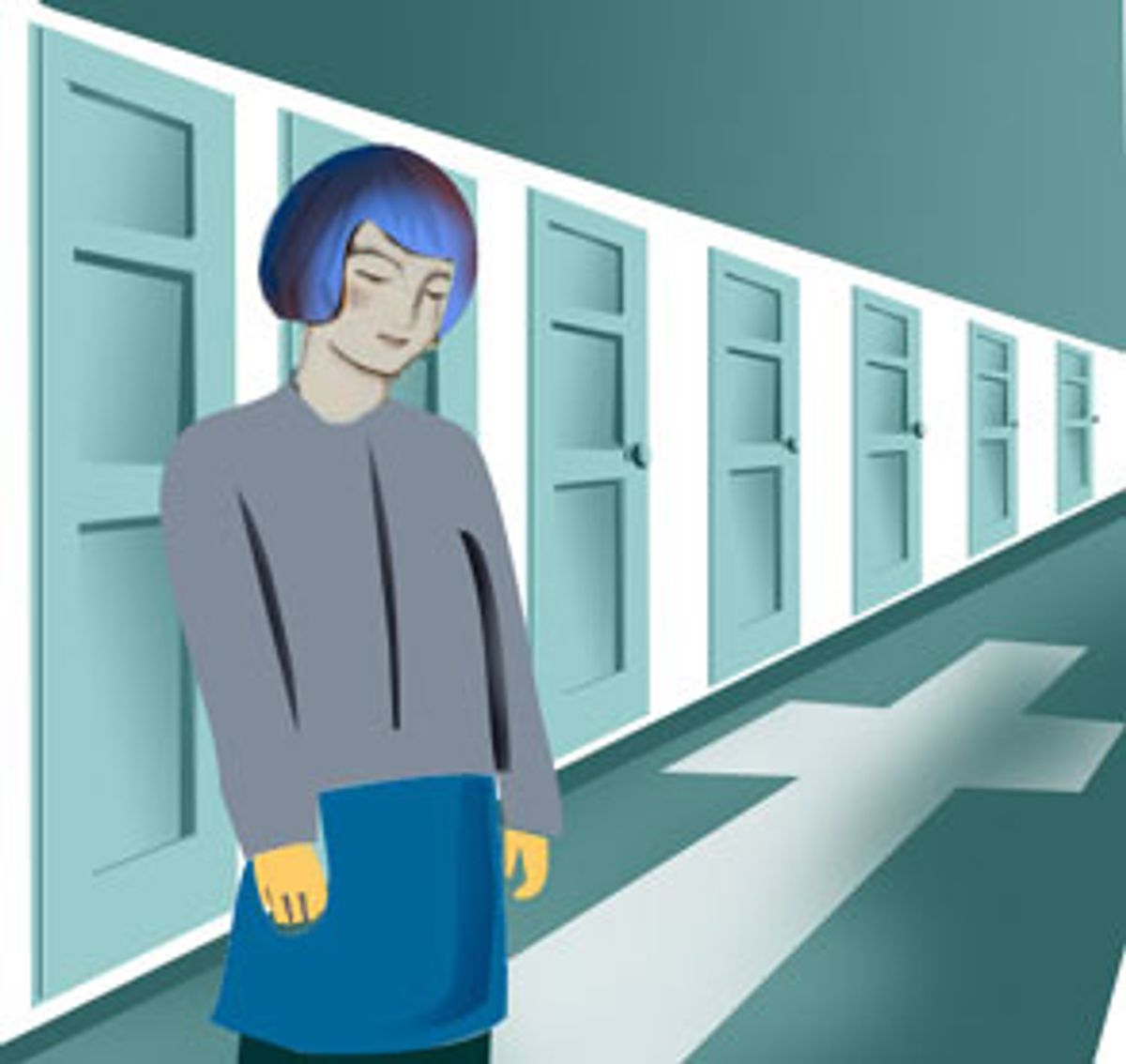 Women flow in and women flow out of here.

Floorboards creak and doorknobs turn in the night as the women slip through the halls from their rooms. Where they are going isn't far: perhaps to the communal bathroom or to the kitchenette to warm some milk or to the chapel to say the rosary. One night, around 1 a.m., I find Olga from Peru circling the corridors in her nightgown as she knits. Purl one, knit one, purl one. These stitches are far more productive than watching the headlights from the street reflect off the ceiling.

We live one woman to a room.

This is one of the things that strike me about living in a convent: the awareness that I am alone, but not alone -- and I don't mean in the spiritual sense. There is a constant restlessness that prevents things from ever being as still as one would expect. This relentless sound of hushed activity comes from the second thing that strikes me about living here: the surprising and varied collection of women.

A crucifix stares down on each one of us from its place above our twin-size bed. Our Lady's Guild House is listed as a convent in the phone book, an unusual choice for a single woman seeking a place to live in the city. But it's safe and centrally located, and the rent is a fraction of the price of a studio in the area. The house doesn't advertise rooms to let and the waiting list can stretch over months. We all found this place through a friend, of a friend, of a friend ...

Women have been flowing through here since 1947. Some stay a few days or a couple of years; others are lifers (a term used jokingly in the house) and stay forever. Miss Dooley, a retired teacher who follows the Red Sox faithfully (even to Florida for spring training), entered shortly after the house opened. She has resided here the longest of all the ladies I know, saying she has no need for an apartment of her own. Decades ago, she decided this was her home. And every holiday she dresses the halls and kitchen cupboards with paper cutouts of shamrocks, American flags or faded greeting cards, as she did in her classroom many years ago.

Some women are here for safety, some are here for practicality and some just had no place else to go. We are a motley crew of Eleanor Rigbys, medicated misfits, starving students and other stray women with haphazard stories of what brought us to the convent-tenant life.

Older residents entered as young professionals looking for a safe, inexpensive or religious environment. Dora hums through the halls, usually in slippers or sandals and a plastic poncho, and carries herself with the poise and grace she learned in modeling classes as a teenager. It's rare for her to leave the building; she has been mourning her husband's death for over 40 years. She just had no reason to do anything after he died, she'll tell you with a smile.

The students are here only temporarily (a few have been placed by parents seeking an alternative to the cacophonous lifestyle of this city, which has the largest concentration of colleges and universities in the country), as are the medical interns from Asia, who rotate every year or two.

There is no washing on holy days. Sometimes women with vague backgrounds appear in the recreation or laundry room flushed with theories of the Apocalypse and one-world government. Portending the "mark of the beast," they slide their quarters into the machines and hang their slips on the line to dry as though they've been living here always. They vanish from the house as abruptly as they came -- with no warning to the other residents and no goodbyes -- leaving you to keep watch over your forehead and calendar on your own. I don't ask questions and neither does anyone else. The unspoken rule is that everyone will have their privacy -- even if they claim to have news of your impending demise.

The majority of the women are single, many have never married and the older lifers probably never will. I spend the most time with the lifers. Good company, they are respectful and comforting in a quiet way, asking questions that are direct yet unprying. Silence doesn't scare them; they let long pauses linger without saying a word. Conversations with the Red Sox-loving Miss Dooley and Paulina, who is semiretired, wind in and out of topics with ease and attention. We talk earnestly of things ordinary and grave: the benefits of lemon in tea, why "Homicide" was taken off the air and whether the Kennedys are cursed or just like any family, cycling through times good and bad.

These subjects loom large in our limited space, so we discuss them with thoroughness and sincerity -- we are a captive audience. And the Kennedys, well, they are a tragic mystery. Their story is part of the chaos living outside our walls, where the world is sloppy and people are easily, if unintentionally, cruel.

One night Ana from Brazil is feasting on the stories of murder, disappearance and drug addiction on "America's Most Wanted." "The world has so much bad things," she says, her eyes at once sad and perplexed. She looks like a child. And like one, she is safe inside the secure confines of her house; "America's Most Wanted" is outside in the big bad world.

No visitors are allowed beyond the lobby.

This is the most important rule of the house next to "women only." A university student violated it one night as she and her study partner made their way unnoticed from the library into the elevator. Divine intervention arrived via the manager (also a resident and a layperson), who was returning from the basement after having one of her many cigarettes of the day. "But I just wanted her to come up for a little while. I don't have many friends," the girl pleaded. "We all have to follow the rules," the manager responded in her smoke-ravaged voice. After all, rules are the backbone of order.

As we are sequestered from the outside world, the Daughters of the Immaculate Heart of Mary are separated from us. They disappear behind oak doors and stained glass on the second floor, where only the cleaning women and the manager ever venture. Little things about these women who shroud themselves in somber colors and wear a wedding ring for God remind you of their mortal individuality. One sister loves Yankee Magazine and corny jokes; another has a habit of grasping your arm as she talks to you, often forgetting your name. "Sela? Sally?" "Sure," I concede after a while, not wanting her to strain over it any longer, but it leaves me feeling a twinge of guilt.

Nuns of other orders live in the rest of the house with us, and posters in the basement urge all the residents to consider a life with the church -- a life with meaning.

When one has used the last of her check on medication, we buy her groceries. We run errands when the sidewalk is crusted with ice and one's hip can easily be broken. We sit in front of the TV with the one who has just learned she has a malignant growth living inside her. No details are given and we don't ask, but instead talk of the figures flickering across the screen until she's ready to go back upstairs to the solitude of her room.

Women I don't know I pass in the halls with a cursory smile. Sometimes we ride silently in the elevators staring straight ahead, but these strangers are more like me in ways that no one else will be, simply because we are all willing to spend a part of our lives in seclusion, adhering to the same archaic rules.

We live one to a room, but we can't stay here forever.

Ernestina likes to collect things and must have a memento of every woman who has been at the house during her time (how poetic it would be if she had been here since 1947): a handkerchief, an empty olive jar (she loves all containers) or maybe a broken shoe. Each time I carry things through the hall toward the trash in the basement, she stops me. She takes binders, hangers, lotion, a basket, a Nativity scene.

A tall beauty who looks as if she glided off the cover of a Harlequin romance, complete with flaxen curls, is in the elevator with me. She has diabetes and a muscular disease, and walks swiftly to wherever she goes -- which is usually a date. She wants to know where in New York I will be. Will I have an apartment? How exciting to live in more than one room. She reaches over me while she talks and, using her tissue, smashes a bug with long antennae (vermin are the only visitors that make it past the lobby) on the wall next to me. I flinch and she shrugs, saying she's used to it.

She's in her 30s, has a good disposition and makes homemade truffles that are so smooth they make my eyelids flutter. This woman would be a good wife for someone, I think. But then I stop myself. The solitary life isn't always a lonely one. Love is a force in motion, with a shifting shape and some subtlety. It might be from an unseen source or a mixture of visible ones, allowing a person to join his or her life completely to an idea or another person equally. When a boy in a Cees Nooteboom novel asks his flamboyant harpsichord-playing uncle why he isn't married, the uncle replies, "I am married to myself." Whether he chose his reflexive union early in life or it snuck up on him is another matter. But when Dora wants to spend her days indoors within the haven of her mind where the past is always present and neatly unaltered, who can say with certainty that she is alone?

Months later when I call the house, I will learn that dear Red Sox-loving Miss Dooley has departed from this world, leaving her room at the house and her seat at Fenway Park, just as I left my room, empty and waiting for the next occupant.

S.E. Molina is a writer living in New York.