In announcing his support for a national missile defense, George W. Bush puts a futuristic spin on a Cold War relic. 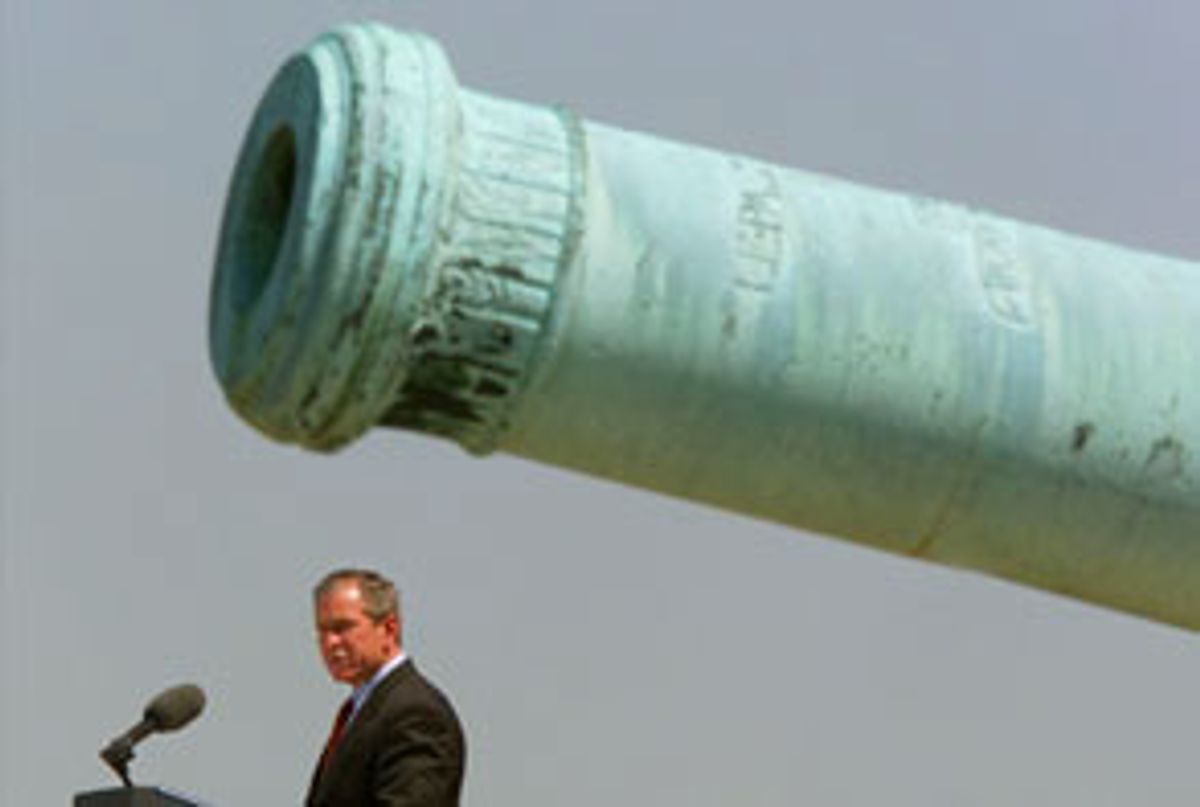 Though apparently incapable of pronouncing the word "nuclear," President George W. Bush tried to set a reassuring tone in a Tuesday speech on what Democrats and foreign leaders deem a fairly radical proposal: returning to a serious commitment to a national missile defense system, which would violate the 1972 Anti-Ballistic Missile Treaty with the former Soviet Union.

With a brazen sun hinting at the first god-awful sweltering Washington summer Bush will endure as commander in chief, the president spoke before an estimated 1,200 people at National Defense University at Fort McNair, near the banks of the Washington Channel. There, in front of more than 50 flags and the immense brick Theodore Roosevelt Building -- for which T.R. laid a foundation stone in 1903 -- Bush all but said that he was willing to lead the U.S. to unilaterally withdraw from the ABM treaty.

"This treaty does not recognize the present, or point us to the future," Bush said. "It enshrines the past. No treaty that prevents us from addressing today's threats, that prohibits us from pursuing promising technology to defend ourselves, our friends and our allies is in our interests or in the interests of world peace."

Though President Clinton had supported further research and development into a national missile defense, or NMD, he was always fairly circumspect about his support for actually deploying the system. Not so his successor.

As always, Bush's rhetoric was carefully crafted. Though he is calling for a return to the same commitment and investment in generally the same Cold War-era Star Wars technologies President Reagan once spoke of -- and despite the fact that he was introduced to the crowd by Donald Rumsfeld, both the 13th (under President Ford) and the 21st (now, under Bush) secretary of defense -- Bush packaged the generations-old conservative cause in new millennial wrappings.

"This is still a dangerous world -- a less certain, a less predictable one," Bush said. "More nations have nuclear weapons and still more have nuclear" -- pronounced new-KEW-ler 18 times during the speech -- "aspirations. Many have chemical and biological weapons. Some already have developed the ballistic missile technology that would allow them to deliver weapons of mass destruction at long distances and at incredible speeds."

These technologies are being spread to "some of the world's least-responsible states," Bush said, implying that these potential disasters are not the kind that can be prevented with treaties.

This is, after all, not your Reagan's SDI, the strategic defense initiative. The entire missile defense system proposal has changed -- though it is no less politicized.

In January 1991, President George H.W. Bush refocused SDI from heading off a Soviet missile attack to preventing other threats. A land-based national missile defense, or NMD, was one of these new focuses. This evolved into a larger program, not just land-based. During the Clinton administration, a segment of the intelligence community prepared a report challenging the size of the threat of a missile attack, and thus any justification for the investment in NMD. Republicans in Congress thought the books were being cooked, and after the GOP revolution in 1994, Congress ordered the CIA to appoint a "Commission to Assess the Ballistic Missile Threat to the United States."

It came to be called the Rumsfeld Commission, after its chairman. Its report, issued in July 1998, challenged the earlier intelligence report and pushed for the NMD. Clinton's secretary of defense, William Cohen, got with the program. As did Clinton himself, who in July 1999 signed the National Missile Defense Act, investing further money into the program while stressing that "no decision on deployment has been made."

And now comes Bush to take up where his pop left off, armed with Rumsfeld himself as his Defense guy, and clearly having made a decision on deployment.

Earlier in the day, Senate Minority Leader Tom Daschle, D-S.D., had expressed "concern" about not only the cost of the proposed system, whatever that may be ("they have not been clear about the numbers," he said; estimates range from $30 billion to $200 billion) but also about the fact that the technology seems so unpromising.

"This is one of the biggest turkeys I've seen to date," Daschle said in a press conference. "And it's a turkey, in large measure, because there has not been a shred of evidence that this works." While he and the Democrats support additional research funding, "to deploy and to violate or abrogate the ABM treaty before we've ensured that it works is absolute silliness."

Later in the day, Daschle shifted food metaphors, referring to NMD instead as "a lemon."

Bush took care to address some of Daschle's concerns, though of course he had quite a different view of the fact that out of three tests of the system, only one hit the target.

"We recognize the technological difficulties we face and we look forward to the challenge," Bush said. "Our nation will assign the best people to this critical task. We will evaluate what works and what does not. We know that some approaches will not work. We also know that we will be able to build on our successes."

The system would only be deployed "when ready" Bush said, "and working with Congress."

Not to mention with our allies throughout the globe, Bush said, as well as other "interested states," like China and Russia. The Bush administration has been slammed by European allies for failing to communicate its plans and operating as a lone wolf -- most glaringly in the recent decision to unilaterally withdraw from the Kyoto accord on global warming.

On this issue, therefore, Bush made sure to send a different message. On Monday, it was announced that -- in advance of Tuesday's speech -- Bush spoke with President Jacques Chirac of France; Chancellor Gerhard Schroeder of Germany; Prime Minister Jean Chretien of Canada; Prime Minister Tony Blair of England; and with NATO's secretary-general, Lord George Robertson.

Moreover, in his speech, Bush announced that beginning next week, delegations headed by three men on the stage -- Deputy Secretary of State Richard Armitage, Deputy Defense Secretary Paul Wolfowitz and Deputy National Security Advisor Steve Hadley -- would be dispatched to meet with allies "in Europe, Asia, Australia and Canada to discuss our common responsibility to create a new framework for security and stability that reflects the world of today."

Russia's reaction to all this is perhaps even more strategically significant, however, since the ABM treaty Bush seems willing to violate is with its former empire. And, of course, Russia is the only nation that currently has the nuclear missile capacity to destroy the United States. President Vladimir Putin and other Russian and Soviet leaders have long interpreted U.S. national missile defense system plans as a further attempt at global dominance.

Thus, a few hours before the speech, Bush phoned Putin to discuss the matter. Putin "was very appreciative" of the call, the White House quoted the president as saying. According to the Russian news agency TASS, a Putin spokesman said that the Russian president "valued the fact that the American leader informed him about the issue" and appreciated the 12-minute discussion.

The Clinton administration was never able to convince Putin of the good intentions behind the U.S. desire to renegotiate the ABM treaty to allow a missile defense system. Bush's speech seemed to address Putin's concern by trying to confuse the hell out of him. He made it clear that he was willing to scrap the ABM treaty. But he never actually said that he wanted to do so.

And he also painted his willingness to scrap the ABM treaty as proof of the improved relationship with Russia -- a desire to move away "from the adversarial legacy of the Cold War."

Russia and the U.S., Bush said, "should leave behind the constraints of an ABM treaty that perpetuates a relationship based on distrust and mutual vulnerability. This treaty ignores the fundamental breakthroughs in technology during the last 30 years. It prohibits us from exploring all options for defending against the threats that face us, our allies and other countries."

Bush did not lay out specifics as to what kind of missile defense system he favored. He said the system "might involve land-based and sea-based capabilities." Alternately, systems "based at sea or on aircraft" could provide "the substantial advantages of intercepting missiles early in their flight, especially in the boost phase."

"We have more work to do to determine the final form these defenses will take," Bush said.

The vagueness seems to be a team plan.

In a press conference at the Pentagon held before Bush's speech, Rumsfeld said that national missile defense systems "need not be 100 percent perfect in my opinion, and they are certainly unlikely to be." However, the system would serve its purpose, he said. "Anyone who thinks about history understands deterrence and dissuasion is an important aspect of modern life," Rumsfeld said. "The first choice is not to prevail in conflicts but deterring a conflict from occurring."

Asked when the administration hoped to have a system up and running, Rumsfeld said, "I am not going to be putting timetables on that."