Not a moment too soon

Orthodontists reap the benefits of the trend toward early treatment -- but do their young patients? 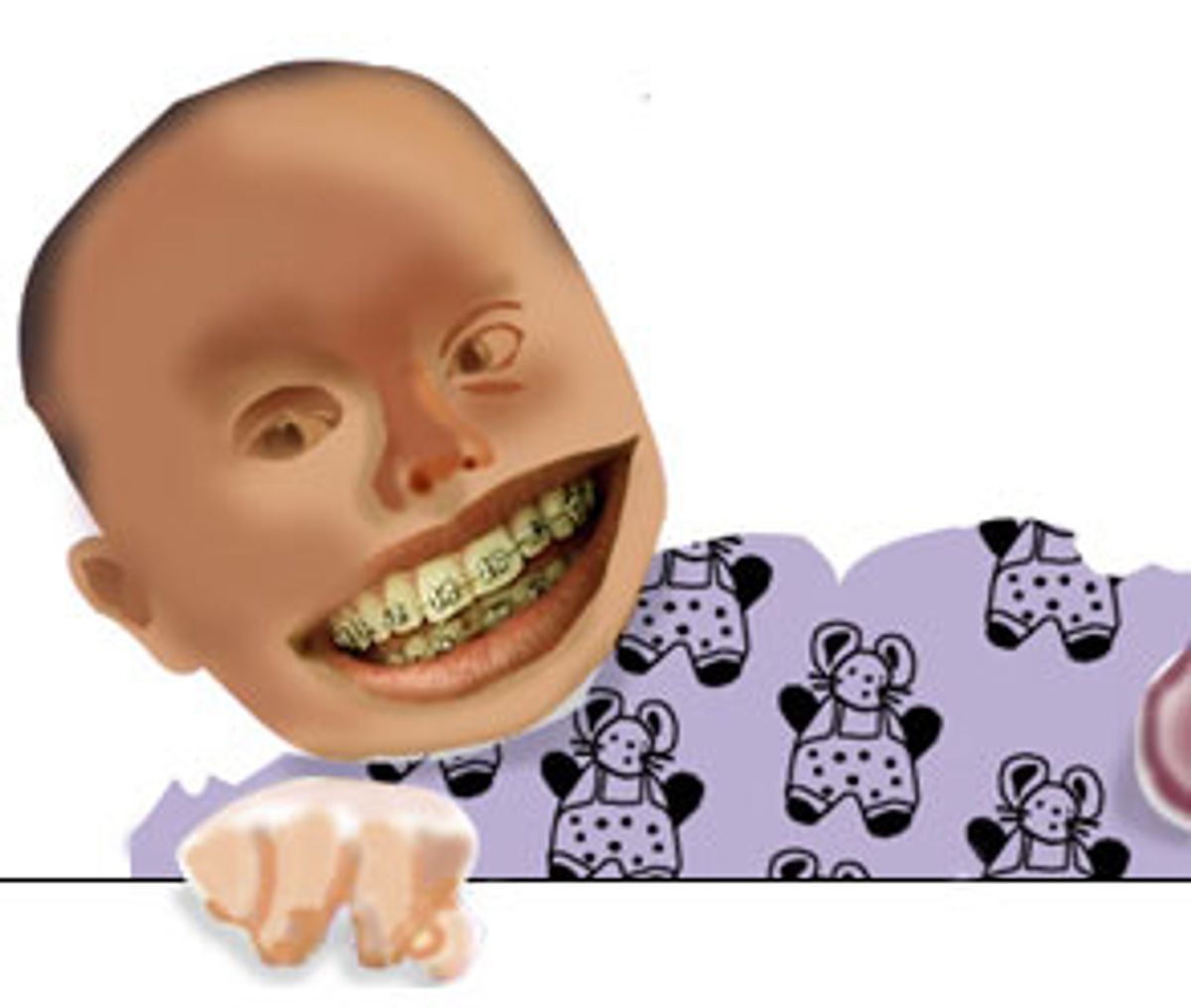 The highly successful -- and controversial -- campaign to get children into orthodontists' offices as early as preschool seems exquisitely timed to coincide with a growing obsession with children as perfect parental display items. Witness, for example, the steady rise of cosmetic plastic surgery for kids such as ear jobs (doubled for preschoolers since 1992) and liposuction (quadrupled for teens). The idea that one's toddlers should have to endure a crooked smile or buckteeth until the fix of braces in the teen years is suddenly viewed as cruel and unusual, an unnecessary delay of superficial excellence.

Indeed, many thousands of well-meaning parents are being wooed by orthodontists to foot the bill for early or "phased" treatment, an approach in which doctors say they can more quickly and easily render a perfect smile by getting to younger, more malleable jaws (usually between the ages of 3 and 8), rather than waiting for traditional treatment in the preteen and teen years.

There's just one problem. Mounting evidence shows that early treatment often results in a longer, more costly stint of treatment, and may entail some worrisome side effects. So compelling is this new data that orthodontists increasingly are taking aim at their own, charging that much of the early-treatment trend is fueled by a desire to build up profitable practices by roping in more patients at an earlier age.

Orthodontists are slinging mud back and forth on the subject in orthodontic journals and at conferences, most recently at a national conference held in February at the University of Michigan. (The gathering was called, in part, to debate the controversy. Another national conference examining early treatment is scheduled for next February in Phoenix.)

The Michigan conference didn't achieve much consensus, but debates were intense and emotions ran high, notes attendee Timothy Wheeler, orthodontic department chairman at the University of Florida and a former "big advocate" of early treatment. "There's more evidence that early treatment is not always the best solution, but many early-treatment fans don't seem to want to hear that."

While professionals spar, potential and present patients are most likely to hear the pros of early treatment. Both sides agree that the early-treatment trend is already firmly entrenched, practiced by 90 percent of orthodontists, says David Hamilton, former president of the American Association of Orthodontists. The AAO's party line is that all kids need to be seen by an orthodontist, ideally well before age 7. That's the same message they're repeating in somber advertorial messages to parents in several national magazines and in a video mailing blanketing dentists' offices from coast to coast.

The campaign is working. The overall number of kids younger than 18 who are signing on for braces -- which nowadays cost an average of $4,000 to $6,000 -- has doubled to 4.4 million since the 1980s, according to the AAO. While an AAO spokesperson said the organization doesn't keep tabs on the age kids begin wearing braces, both early-treatment fans and opponents agree that early treatment rules the orthodontic roost. And as early braces proliferate, the climate fostering their acceptance warms. "If a parent sees lots of other youngsters with braces, they're much more likely to agree when that's the orthodontist's recommendation," notes Mission Viejo, Calif., orthodontist James Hilgers.

For those parents who bring young children to the orthodontist for an appraisal but remain unsure about beginning braces, newly revved-up marketing efforts aimed at young patients and their parents help encourage an affirmative decision. Kids can be swayed by the comprehensive incentive prize system now offered by most practices: "Wear your headgear, earn a movie pass!" More important for fence-sitting parents, most practices include one or more "treatment coordinators," sales and marketing experts whose mission is to persuade the hesitating parent of the necessity of braces -- the earlier the better. All told, notes Hilgers, "it's hard for parents to resist the voice of a medical authority and the treatment coordinator."

Hilgers ought to know. He was one of the earliest early-treatment fans, and, at that time, when a youngster of just about any age "walked through the door, they got braces," he recalls, admitting that part of his enthusiasm was based on a desire to retain more patients. Over the years, he has become convinced that much of early treatment doesn't make sense. "Kids [in early treatment] tend to stay in orthodontic devices longer, which can create burnout for the patient and is more costly for the parent," he says.

Typically, treatment started earlier is done in phases, and long-term patients can end up spending an additional $1,000 to $2,000 per "phase." This longer time span -- which can add up to a total of five to seven years in orthodontic devices -- increases the chances of orthodontic treatment's negative side effects, Hilgers adds. These can include gum disease because of difficulties in cleaning teeth in braces and "root shortening," which is a result of moving teeth and can cause tooth instability later on. For his part, Hilgers now typically treats children at a time when many adult teeth are emerging -- around 10 years old or "whatever age will involve less time in the mouth."

In fact, studies have begun to indicate that in many garden-variety orthodontia cases, early treatment is no more effective than treatment later on. In a 10-year study of 7-to-12-year-olds with the most common orthodontic problem -- buckteeth ("overjet" in orthodontist-speak) -- University of North Carolina orthodontics professor Camilla Tulloch found "no significant difference in treatment outcome" between treatments started earlier or later. Yet early treatment took an average of six months longer, which "would tend to raise the cost," notes Tulloch.

David Hamilton is one of early treatment's biggest fans and, perhaps surprisingly, he agrees with Wheeler's conclusion that the data is not yet conclusive. But the retired New Castle, Pa., orthodontist, who lectures widely on the topic, believes that the experience with children that he and other early-treatment advocates have encountered speaks for itself. Denver orthodontist Chris Carpenter agrees. "It's impossible to prove scientifically that early treatment is better," he notes. "But I know what I see in my practice, and it means a lot that so many other orthodontists do early treatment as well."

A major bone of contention between the two camps centers on the issue of whether or how much growing jaws can be manipulated to help fix teeth problems -- that is, expanding jaws with an orthodontic device to create more room for overcrowded teeth.

Early-treatment foes such as Lysle Johnston, University of Michigan chairman of orthodontics and pediatric dentistry, believe that children's jaws grow at the rate they are genetically programmed to, and that techniques and devices that purport to produce growth are "nonsense." His many essays in orthodontic journals, such as "Growing Jaws for Fun and Profit," anger early-treatment proponents such as Hamilton, who faced off with Johnston at the recent Michigan conference. "I haven't been able to get Dr. Johnston to concede much," sighs Hamilton. "I simply believe he's wrong about jaw growth."

"We're not people who start everybody in braces because we can," continues Hamilton. "A good orthodontist knows when to start treatment and when to delay it and when it's not needed." Hamilton acknowledges that there may be some overzealous orthodontists: "Every profession has people who are either uninformed or unprincipled," he says. "My rule of thumb is that it's about 15 percent."

All of which is unsettling news for consumers. Orthodontists agree that it's a good idea to monitor a child's teeth from an early age, but how does one determine whether advice to begin braces early is sound? "Interview two or three orthodontists," advises Hamilton. Larry Piekarsky, a New Jersey orthodontist who recently received "tons of letters from pissed-off orthodontists" when he criticized early treatment as a "moneymaker" in his local newspaper, says, with somewhat weary resignation: "As a consumer you don't ever know for sure what's reliable advice. Ask around to people you know, then hope you get lucky."