The sensual tortilla, the ambassador and Mr. Hulot

Extolling the glories of cornmeal, lime and a male Shirley Temple for the 21st century. 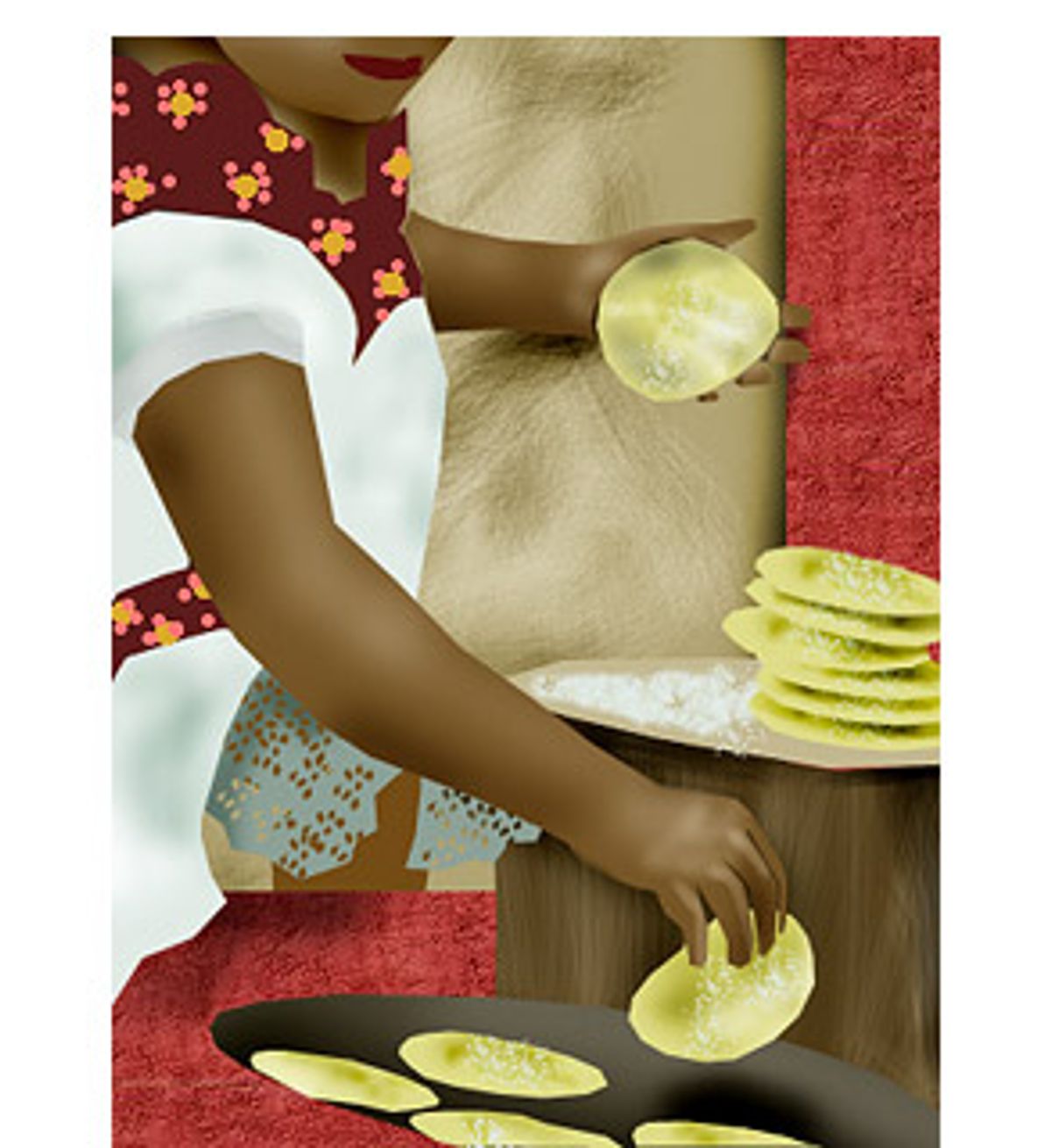 If there's nothing else to eat here, there are always tortillas. Tortillas! Forty cents a kilo, which contains (I just counted) 53 of them.

Where would we be without tortillas? There is nothing more sensual for us Mexico-philes than the first hot tortilla of the day. Biting into it is not unlike biting into the skin of your sweet young love back 40 years ago when her skin was so succulent, her flesh hot and ever ready to be nibbled on and love was everywhere, floating up before you like a steamy vision, and you could hardly make it through the day without this passionate love of warm flesh rising up on you like a fecund summer storm to sweep you along with the protein-rich smell of it. Eating a hot, just-made tortilla fresh from the hands of the tortilla lady is something like that.

Your average tortilla is fabricated with whitewash -- that stuff we used to use to paint the outhouse walls. (We'd also throw a handful down the hole to make the place a little less smelly.) In English, it's called lime. To make tortillas with it, you mix a pinch or so of the lime with water, and boil the corn in it for a short time. Drain and wash, grind it up and you have tortilla flour. Pat it flat with your hands and heat it on a special round, warm plate called a "comal" until it is cooked through, stack the tortillas on a white cloth with a red flower design, take them home and open up the cloth, wrap one up in what they call a "flauta" and pop it in your mouth. You have the taste and feel of divine flesh, eating the flesh of the gods.

Lime -- known here as "cal" -- turns up everywhere: not only in tortillas but in cement for making buildings and for laying down bricks. It's that white stuff painted around the base of trees -- presumably to keep the ants from carrying off the fruit and leaves. It's also used to make piggy banks -- "figuras" -- for storing change, and to paint lines on soccer fields.

But mostly, it's tortillas. Cal, it turns out, provides just enough minerals to make it possible for people to survive on them alone, which not a few do in this poor area. You can't say the same for Hostess Twinkies and Coca-Cola, the preferred dishes of the poor to the north.

Every time I think of cal, I think of warm-soft-yum tortillas -- but I also think of whitewash, and Tom Sawyer, and that great song from World War I, sung by the "limeys" immersed in the gook of the front-line trenches. Can you hear them now, lying in their filthy, rat-infested dugouts, black with mud and ooze, poised for yet another battle of Ypres, singing loud and clear?

When I first met Carlos II he was dying. He was barely a month old, and couldn't hold down his food -- the technical term is "distal bowel obstruction." His father was working for me and I had come over to see him about something that needed to be done and Carlos' mother came out to the car and showed me her disheveled baby and said that he was sick and couldn't hold down his food and she thought he might die. She wondered if she could borrow 300 pesos -- about $35 -- to take him to DIF, the government hospital for kids in Puerto Perdido, and I said get in the car. We got to DIF in 10 minutes, and an hour later they operated on him and untangled his tiny impacted small intestine, and now this child is alive and does all the normal 3-year-old things. The only thing to show what happened is a tiny scar just above the navel.

Carlos has taken a fancy to me and I've taken a fancy to him and it's not just because they gave him my name after the lifesaving routine. It's also not because my godson is the smartest, most beautiful, most charming, most intelligent being in the whole sentient world.

I go to the house to visit with his father and mother, and Carlos II comes to the door of my car and stands there and makes an impromptu speech. "Tiya pol," he says. "Andoo. Si bikka siga pa' 'ya."

They tell me he is speaking Spanish, and although I am not letter perfect in the language I know enough about it to know they are dead wrong. Carlos isn't speaking Spanish -- he's speaking Mandarin Chinese. Thus he is neither a Oaxacan nor even a Mexican -- he's a visiting Chinese, an ambassador of goodwill reborn from that far land and sent secretly from so far away to charm the hell out of the rest of us.

His family doesn't know what Carlos is talking about either, but that's OK. When kids first learn to talk, we aren't expecting the Gettysburg Address or monologues from "Hamlet." His mother pretends to understand him, but Holden Caulfield says that all mothers are crazy and he's right. She says that "tiya" is tortilla and "pol" is pollo -- for chicken -- and "bikka" is the dog Victoria, or maybe his dad's bicycle. But I know Mandarin Chinese when I hear it and I am already planning for Carlos' ambassadorship to that country in 30 years or so. Meantime, I'll get him a job in a fortune cookie factory. "Tiya pol," indeed.

The main reason I have him pegged for an ambassadorship at the very least is that as I soon as I am out of the car, he's delivering this speech of welcome (a very serious speech it is, too; he doesn't let himself smile once, even though he has a smile that would knock your ears off), and all the while he is delivering this homily I'm thinking I should call up MGM immediately, if it still exists, and set him up to be a child star -- the male version of Shirley Temple for the 21st century.

These children have a way about them, don't they? When I first met Carlos he certainly wasn't much to look at, all wrapped up in a dirty blanket, so listless and wan that I figured we'd have to lay him in the grave by nightfall. Now look at him. He touched my heart then; he owns it completely now.

I've told his father and mother about Hollywood and his upcoming job with the State Department -- remember, Shirley Temple ended up at the United Nations -- but I have yet to tell them that I am also going to see that he is elected president of the world and, soon after, I'll wangle a Nobel Prize for him, the Nobel Prize of Deliverance. For all of us who know him and care for him greatly it makes us shiver in fear thinking that this one we almost buried a couple of years ago -- but now he's alive and well and busy, making fine and serious speeches, capturing the hearts of all those around him.

It's late April so it's time for us to leave Puerto Perdido. We put my swimsuit in mothballs, clean up the shack, bar the windows and doors against the sand and the siroccos of the summer. We say goodbye to the beach and the sun and the gentle waves that slap up against the shore. We say farewell to suntanned shoulders and peeling noses and the mosquitoes that come to sup on our blood all the long night.

We say goodbye to the ants that erupt nightly from the woodwork and live (and die) in the speakers of my computer. We say goodbye to the scorpions that, on occasion, nest inside my shoes and surprise me in the mornings by being so irritated when I stick my feet in their bedroom.

We say farewell to the geckos that run willy-nilly across the ceiling of the kitchen at inopportune times, and at odd intervals make their strange gecko noises (what one famous writer called the "kissy-kissy"). Too, we say adios to the colonel bird, with its mournful cry from the next canyon over -- the sweet sad sound that echoes across the hills at night.

We say goodbye to the evenings when we come home and turn on the spigot and nothing comes out because there has been a leak in the toilet that we've been meaning to get fixed but we never got around to, and since they turn on the water only every third day to fill the tank on the roof it will mean that for the next two days we'll be giving ourselves what they call a "Tijuana bath" -- a rag moistened from the 5-gallon jug we use for drinking water.

We say goodbye to the water that does, on occasion, actually flow from the spigot, which may be good enough for mopping the floors or flushing the toilet or taking a shower (with the eyes and mouth shut tight) but which one never drinks, since it's drawn from the latrine and garbage area just outside Puerto Perdido, thus sporting an exotic collection of bacteria, viral infections, green floaty things that you don't want to hear about and, for all we know, ebola.

We say goodbye to that miserable joke that for some reason gets repeated here endlessly. I swear, I've heard this one or its variation about 1,000 times -- I even heard it once when I was waiting to fly out of the Huatulco airport, being repeated (as if it were a koan) by a 6-year-old Mexican kid: "Que entra parado, sale mojado, y oliendo pescado?"

What goes in standing up (or, better, erect) and comes out all wet, and smells like fish?

The answer: Un buso (someone in a wet suit who just got out of the ocean).

It strikes me that this nationally known bit of doggerel is not unlike the ones we used to fabricate from the poems they made us memorize in school. I recall one by Robert Frost about stopping in the woods on a snowy night that got changed to:

"My little horse must think it queer/That I stop to give it to him/In the ear."

Or Henry Wadsworth Longfellow's sappy poem about the village square that got wonderfully transmogrified into:

"Under the spreading chestnut tree,/The village idiot stands/Amusing himself by abusing himself/And catching it in his hands."

We also get to say farewell to our weekly visits to the telephone company, trying in vain to get plugged into the world. The last time we were there, the lady said (again) that there were no connections to be made in our neighborhood and there would be none any time in the foreseeable future. We have to wait until any of our neighbors who has a telephone either moves to Ouagadougou or dies. Since people never move out of here, even to Ouagadougou, our only recourse is to wait until flowers and wreaths and weeping ladies dressed in black appear next door and then hurry over to the Compania de Telefonos and lay claim to the vacated line.

It's time to depart and I feel like I'm in the last scene of "Mr. Hulot's Holiday": The sand is blowing across the oceanfront roads, the fireworks went off last week for Semana Santa, that same old song is winding down on the phonograph -- only it's the radios playing at the public market -- and all the gringos are packing up their butterfly nets and tennis rackets and heading back to the place where the sun don't shine, at least not as fiercely and as well as it does here.

Carlos Amantea is the author of "The Lourdes of Arizona." His writing also appears in RALPH.