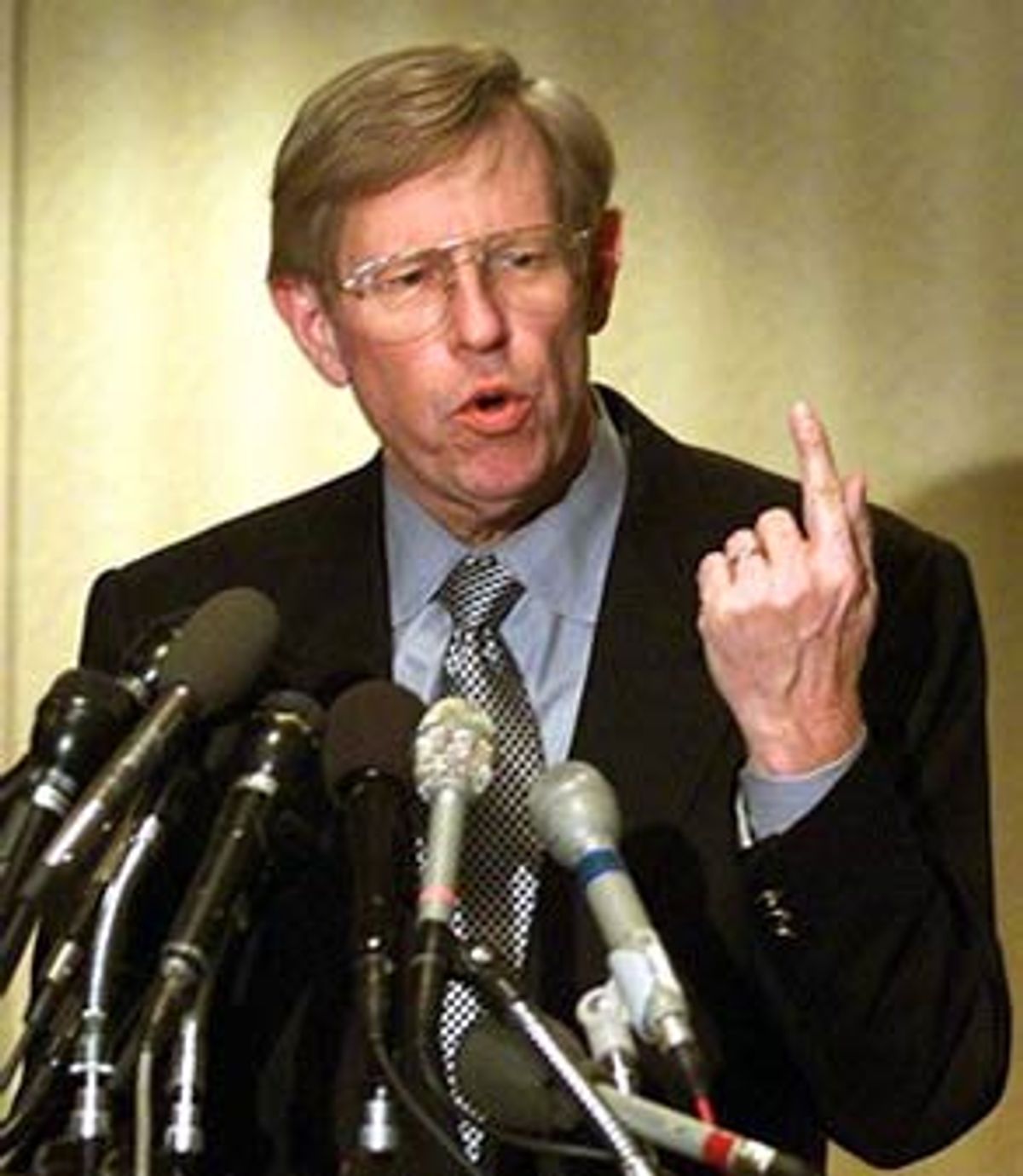 The Senate Judiciary Committee is scheduled to vote Thursday on the nominations of Ted Olson as solicitor general and Larry Thompson as deputy attorney general -- nominations that Democrats on the committee have threatened to block until the Bush administration addresses their concerns about the judicial nomination process.

But at least for the ranking Democrat on the committee, Sen. Patrick Leahy of Vermont, there is another serious issue as well: the forthrightness Olson has or hasn't displayed concerning the role he played in a privately funded investigation into the lives of Bill and Hillary Clinton. Known as the Arkansas Project, and funded with around $2 million from conservative billionaire Richard Mellon Scaife, the investigation was run from late 1993 to 1998 through two educational nonprofit organizations under the aegis of the American Spectator magazine. The nonprofits were, by law, not supposed to participate in partisan political work.

According to a copy of Olson's responses to follow-up questions by the committee, obtained by Salon, Olson now admits to being involved with the Arkansas Project a year earlier than he had previously said. He also now admits, though vaguely, to a greater involvement in the project than he has previously stated.

But Leahy is apparently less concerned about what Olson did than how honest he was about it when testifying before the Judiciary Committee.

According to a Leahy aide, the senator "is concerned about the lack of specificity in the first round" of questions the Vermont Democrat asked near the end of Olson's confirmation hearing on April 5. Olson dismissed many allegations about his involvement in the project, occasionally speaking in a way one could charitably describe as not quite adhering to the same spirit of full disclosure that Olson once demanded of President Clinton.

So Leahy subsequently submitted follow-up questions to Olson, which the nominee answered. As of Wednesday afternoon, Leahy was "looking at the follow-up answers to see if they're sufficiently substantive," according to the Leahy aide. The White House would not comment on the matter, as it has "a policy not to discuss nominees before the confirmation process has completed," according to spokesman Jimmy Orr.

At the April 5 hearing, Leahy's questions were direct. "Were you involved in the so-called Arkansas Project at any time?" Leahy asked.

"Only as a member of the board of directors of the American Spectator," Olson responded. "It has been alleged that I was somehow involved in that so-called project; I was not involved in the project, in its origin or its management."

Olson downplayed any involvement other than to have voted in 1998, as a member of the Spectator executive board, to end the investigations and refocus the magazine's energies on profits. "I was on the board of the American Spectator later on when the allegations about the project were simply that it did exist," Olson testified, but he insisted he had nothing to do with its inception. He didn't even know anything about it until 1998, he said, after he became a member of the Spectator's board of directors and voted to shut down the project.

Leahy continued. "There were no meetings of the Arkansas Project in your office or --"

"No, there were none," Olson interrupted.

But this testimony stands in stark contrast to "The Hunting of the President," by Gene Lyons and Salon columnist Joe Conason, which claims that Olson's involvement was likely far greater than that. A 1995 audit of the Arkansas Project's books showed that the American Spectator nonprofit funding the Arkansas Project paid more than $14,000 to Olson's law firm of Gibson Dunn & Crutcher, from March until August of 1994.

Interestingly, the first payment came just a few weeks after the Spectator published, in February 1994, a scathing hit piece against both Bill and Hillary Clinton called "Criminal Laws Implicated by the Clinton Scandals: A Partial List." The authors of the piece were the Spectator's pseudonymous legal team -- "Solitary, Poor, Nasty, Brutish & Short," a reference to Thomas Hobbes' description of the life of man -- but Olson, as he has conceded, was one of its two coauthors.

Olson remains, according to Senate Judiciary staffers, all but assured of confirmation both in committee and on the floor of the Senate. But his evolving responses are illuminating.

Olson states that he was counsel for the American Spectator "from time to time beginning in 1994," around when the Arkansas Project was born.

Asked by Leahy for billing records, as well as a description of the scope of that legal counsel, Olson says "the nature and scope of those services and billing records ... are subject to the attorney-client privilege."

But other questions from Leahy seem to have jarred Olson awake and restored some of his memory. Though he's been asked for years about his involvement in the Arkansas Project, it's not until this last round of follow-up questions that Olson acknowledges that he had a meeting about the Arkansas Project in his office prior to 1998.

Now, in his written response to questions, Olson responds, "I do recall meetings, which I now realize must have been in the summer of 1997 in my office regarding allegations regarding what became known as the 'Arkansas Project.'"

Olson also says he knew of allegations "concerning whether expenditures involved in that project had been properly documented." That's certainly beyond whether or not the project "did exist."

And, again, when was this? "I now realize that the allegations concerning the Arkansas Project came to my knowledge in 1997," he writes.

Leahy also asked, in his written questions, about a meeting Olson attended at Gibson, Dunn & Crutcher in late 1993 or early 1994, where plans were first discussed to have the Spectator run a Scaife-funded "series of probes into the Clintons and their alleged crimes in Arkansas."

This is one of the diciest issues for Olson, since this is one of the first meetings when, according to Conason and Lyons, the Arkansas Project was hatched. Previously, Olson dismissed talk of such meetings. ("No, there were none," he told the committee in April.)

Now he responds, "I do not recall the meeting described." And, he says, "I certainly was not involved in any such meeting at which a topic was using Scaife funds and the American Spectator to 'mount a series of probes into the Clintons and their alleged crimes in Arkansas.'"

It's a parse-worthy response one could only call Clintonian.