Show me your panties!

Photographer Roy Stuart is the prince of Parisian up-the-skirt erotica. 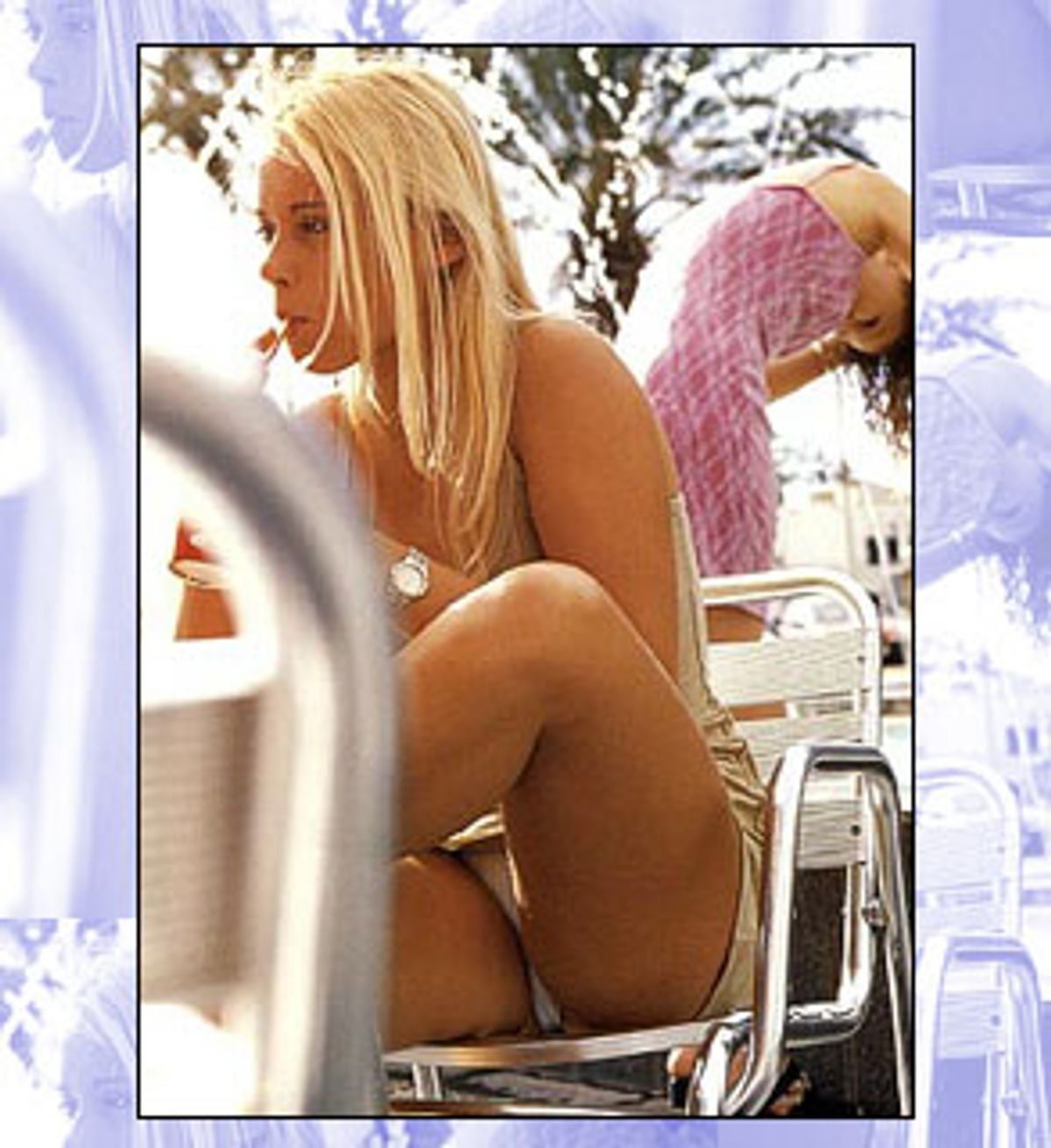 Oh, the luscious girls whom Roy Stuart photographs in Paris! He shoots them sprawling on Metro stairways, long legs spread wide beneath tight skirts. Teenage nymphs sip seltzer through straws, dresses bunched around their hips. Chicks likely named Brigitte or Fifi gaze at the Eiffel Tower as a breeze off the Seine lifts the hems of their frocks.

Stuart reveals female citizens of Paris wearing spotless, tight white underpants that wedge inside their derrières. Ah, say it again -- "derrière." What a wonderfully poetic word for rump. And because Stuart's French girls are all human, you see them crouch in the alley and use one finger to hook open the crotch of their white panties and urinate. They pee on concrete, on bricks, on grass. If you were to go with Stuart to the train station, say Gare du Nord, he'd show you dozens of traveling girls -- maybe Italians or Germans -- crouching by the lockers changing their dirty panties.

"Each up-the-skirt picture is made to look somewhat staged," the photographer insists over the phone from Paris. "I don't want them to look like they're an accident. They wouldn't look as good. I think it's more exciting knowing that they're staged than if you're 'stealing.' Those are less interesting. The girl is not participating; it's almost like she's dead. In my up-the-skirt you know the girl is collaborating in your fantasy. It's sexy because she's aware of it, and it's more sexy because she's pretending that she isn't."

His words make sense spoken on the phone from Paris. In print they make you want to go, "Huh?" Maybe he is just being too French, even though this half-American, half-English photographer was born on the Upper West Side of New York. He started his professional life as an actor, but his only role of interest was a bit part in "The Godfather Part II," playing an American soldier back from World War II.

I ask if he's going to be buried in France. "Buried?" he repeats. Have your tomb next to Baudelaire's? Live your whole life in France? "Could be," he answers. "Could be my base. It's hard to tell what's going to happen. I like other parts of Europe as well. Italy I like a lot. Spain. Italy. Yes."

There's a certain generosity in Stuart's up-the-skirts. The wind blows mademoiselle's dress over her face, but she doesn't look foolish or embarrassed. She tinkles in the alley as unselfconsciously as a poodle. Although Stuart is not French, I note that he has absorbed the French vision of women.

"The French appreciate women more than Americans do," I tell him.

"That's a big generality," Stuart says. He pauses, then says, "I think in Europe that could be the case. In America it's more consumerist, money-oriented -- success going on. Other things are going on. Americans are going further away from nature with computers, further from the body, escaping more and more from the body. Your original statement could be valid."

Stuart's new book, like his first two, also contains photos of women over age 40, even over 50. The breeze isn't blowing their dresses open because they wear nothing. No doubt these women look the way your aunt or grandmother would look if you saw them naked. They have plump wrestler thighs, sagging breasts, maybe a potbelly, maybe scars. These women do not seem particularly French, because age is an international phenomenon.

Stuart's up-the-skirt and naked matrons are just part of his repertoire. In the new book there is a photo of a man from New Delhi, India, dressed in a woman's sari, pondering a blond French girl lying belly down before him. Her skirt has slipped off. Her colored underpants give her a wedgie. Why does the man look so pensive? What just happened? The Chinese have said that a picture is worth a thousand words, but this particular shot is worth two thousand.

That said, Stuart's new book, like the pair that came before, contains a dozen little multiple photoplays that depict sequences even more mysterious. A girl walks into a clearing in a field of weeds. She strips. She lies on the ground and masturbates. Four men in shorts suddenly appear and watch. She finishes her business and stands up and waves goodbye. This series is titled "Cap d'Agde."

In "Women in Love," a woman is blindfolded and mounted by both a middle-aged man and a man who is younger (perhaps the older one's son?). A short printed dialogue before the story reveals that the woman wearing the blindfold knows that she makes men crazy; she says, "I am Poland, I am Germany, I am Italy, I am France, I am America. I follow you. You are passionate. I live for you."

These are curious sequences. Whenever Stuart is interviewed he is asked, "What are you trying to do? What are you trying to say? What's the point of it?" These questions irritate him. "I try to present the world as more suitable, more livable, through the fantasies," he explains. "The fantasies project a model of how the world should function. That's the purpose of the fantasies. They're sort of like ideas that could actually exist -- presenting a better way to function which heavily relies on more sexual license from females."

Probably the Parisian woman with the ultimate sexual license is the French maid. "Roy Stuart Volume III" would not be a Roy Stuart book without at least one such sequence. French maids are Stuart's soufflé. In this one, "Magda," the mistress of the house, kneels and rubs her face against the maid's panties. "[Magda] looks at me with her insolent, blank eyes and my throat tightens, my heart pounds," the mistress reveals in a printed monologue. "I'm not a lesbian, you know. I'm a very respectable real estate attorney, 37 years old." The two women strip. Magda the maid has cute little breasts. The attorney's are fuller. Their encounter ends as the maid spanks the mistress with a riding crop, a gift from the other's husband.

"She hits uncommonly hard for such a passive girl," the spankee says about the spanker.

Oh, what silly prose! All the text in this book, presented in English, German and French, is ridiculous. Look at the last photo in the sequence: the attorney on all fours, wearing only stockings and the maid's white apron, Magda herself vigorously beating the other's rump. Look at that bitch's red welts. You honestly think she is thinking, "Oh, my maid is hitting me uncommonly hard"?

Stuart doesn't shy away from heterosexual couplings, although his men never take a leak. They don't even seem to ejaculate -- the book contains only a single photo of four girls lying on the floor with sperm on their faces. This brings to mind the most dramatic photo sequence in Stuart's first book, in which he photographed a wall with holes bored into it for men to poke their erections through. What an act of faith! What might happen to their dicks on the other side? What if there are dozens of 10-year-old girls next door, each done up like JonBenet Ramsey, each gripping pinking shears. No, no, no. That's a sick American fantasy. No. On the other side of Stuart's wall are a flock of naked and hungry French girls ready to stuff their mouths. But Stuart shoots only the beginning of their feeding frenzy. None of these women ends up with sperm on her face.

Whether such a photograph would thrill or sicken you, now consider the premier photo sequence in "Roy Stuart Volume II." An angry woman wearing no underpants accosts a woman sitting on the steps smoking and then stuffs the mouth of the smoker with unlit cigarettes. This is almost a parody of "a mouth dripping with come" blow job photo.

The most elaborate photo sequence in "Roy Stuart III" is of a woman with short hair who makes a male agriculturist who doesn't like Americans (so says the written introduction to this sequence) wear red pantyhose. She then strings him to the ceiling with colored cloth and ropes. "He's willing to do just about anything to get next to a female," Stuart explains. "This points out the weakness of men. [There's a] possibility ... she'll touch a part of him." The female in question does rub the agriculturist's penis against her breasts, but then she lies below and masturbates while he dangles high above her, a bright pink condom over his useless penis. "I want to leave you with the possibility that she might just leave him wrapped up there forever."

The photo might leave you with the same feeling. Many of Stuart's sequences originally appeared in Leg Show magazine, a strange little monthly full of "real-life" naked women -- the kind who probably work at Kmart and go bowling -- along with Stuart's French maids. If you page through five or six issues, Leg Show doesn't appear to be as specifically graphic as Penthouse. Men keep their spunk to themselves. In fact, there's something both cheesy and innocent about Leg Show. Imagine you are a 15-year-old guy who finds a stack of girlie magazines like this in your bachelor uncle's basement. You do not look for narrative unity among the photos. You do not worry if they are crude or not crude enough. Who cares if the images objectify women? You certainly don't care if the up-the-skirts are staged or not. They're just dirty pictures. That's all. Stuart's work should be looked at in similar fashion.

So think of Stuart shooting his up-the-skirts in Paris. Other artists in France, like Matisse, often had sex with the nude women who modeled for them. Perhaps the men in Stuart's photos never come because that act is saved for the photographer himself. It's easy to imagine Stuart falling in love with his young French girls in their billowing dresses. Easy to picture him replacing the breeze with his own breath. "There has to be a certain feeling if you're working with someone that you're trying to bring up the best of," he admits. "There has to be this falling-in-love feeling photographically. It has to work that way. It has to come through the pictures. You have to feel what the artist is feeling at the time he made the picture. Most of the pictures are trying to project a positive image. [In the] shoots with older women, or the woman who was hanging the guy from the ceiling, you still have to bring out the best of her. There has to be a communication or feeling. It's a complex thing. But you're too much into the creating to let your emotions take over outside of the context of the pictures."

But does he then sleep with his models? Alas, no.

"If you get too moved," he says, "you get distracted."