This year's Webby nominees are proof of the shakeout everyone knew was coming, and a sign that life still exists on the Net. 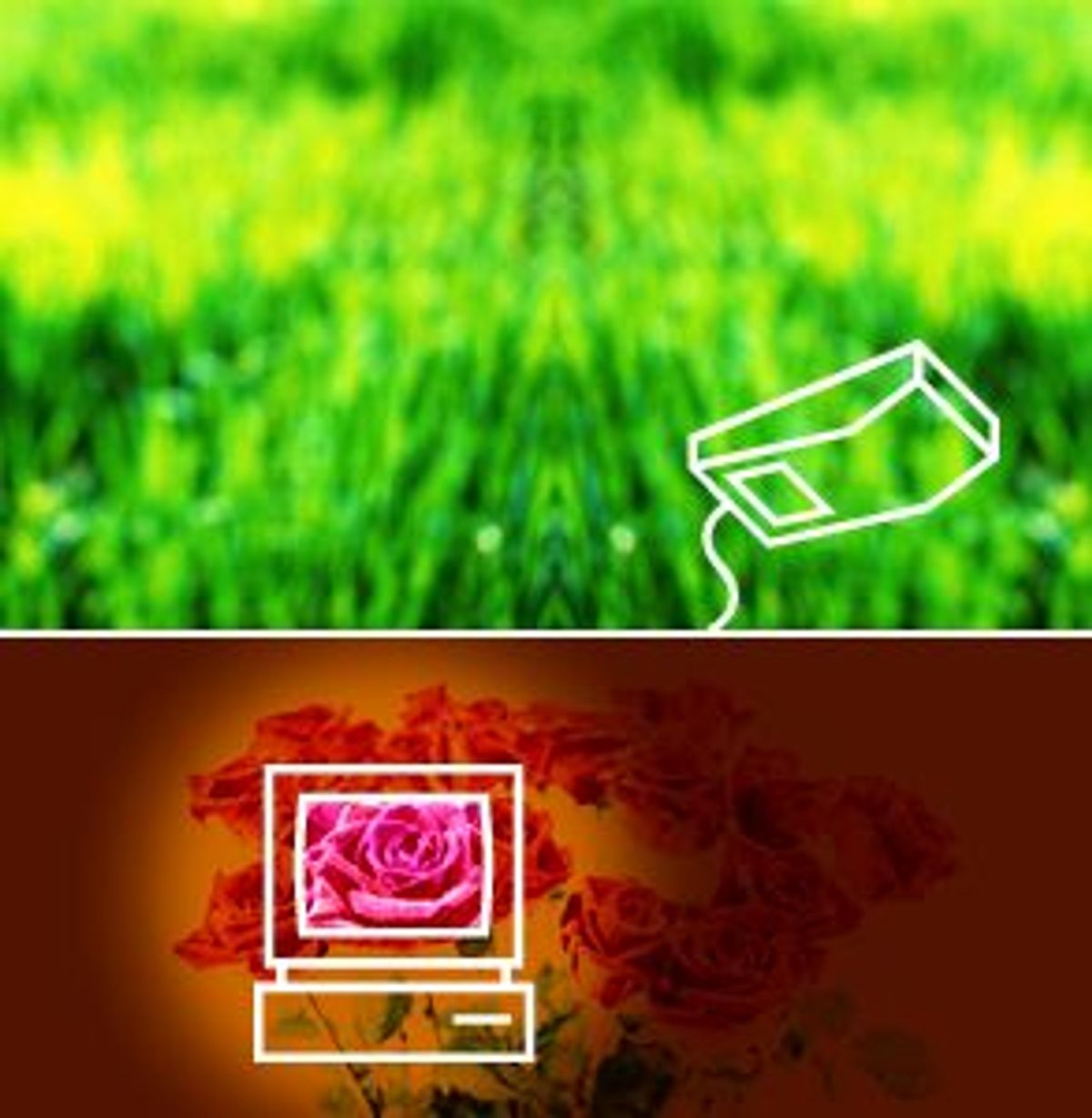 Last year's Webby Awards were, in retrospect, a good indicator of just how outrageous Net hysteria became at its height. The "Oscars of the Internet" in 2000 were a study in decadence -- VIPs noshed on appetizers in San Francisco's elegant Grace Cathedral while being "photographed" by faux paparazzi in 1940s garb; the three-hour ceremony featured a marching band, aerialists and celebrity presenters, while thousands drank vodka cocktails, gobbled sushi and danced under tents at the top of Nob Hill. Executives of dot-coms you'd never heard of trotted out the Versace and stretch limousines and schmoozed with Mayor Willie Brown. It was all utterly over the top, and presumably incredibly costly.

But there was no shortage of sponsors to pick up the tab back then: Absolut Vodka provided the booze and Intel paid for the party. Pricewaterhouse Coopers, Hewlett-Packard and Adobe all anted up, and the "official Webby brands" included prestige names like Audi, United and Visa. There was also a slew of dot-com sponsors, such as Flyswat.com, worldyinvestor.com, Netpulse and Beseen.com -- most of which you probably have not thought much about since, even if you are still wearing the free Flyswat watch that came in the goodie bag.

And then there were the dot-coms that eschewed all sense of modesty and decorum in order to create spectacles of themselves, viewing the event as a potential marketing platform. Wiredplanet.com, for example, sent representatives to the party in full astronaut gear, presumably to send the message to attendees that the online radio station was out of this world. The CEO of Intellihealth faked an "accident" with a jogger in the street in order to draw attention to his dot-com. Not to mention the countless marketing grunts whose companies sent them to the gala affair wearing branded logo T-shirts.

So here we are, a year later, and much has changed. Thanks to the NASDAQ crash, it seems that half of San Francisco has been laid off; dot-coms fail on a daily basis, and even the most hubristic executives have fallen silent. Still, last week, the International Academy of Digital Arts and Sciences announced the nominees for this year's Webby Awards, destined to be held in July. The question posed by the new slate of nominees is obvious: If the Webbies are a barometer of the current state of the Web, what message can we glean from this year's model?

If your first assumption is that this year's Webby Awards will be a more modest affair, a sad and abashed reflection of a failed revolution, you are wrong. There has been some belt-tightening in the industry, and a few Webby winners have fallen by the wayside, but the party will go on as planned. We always knew that there would be a shakeout, that the speculative bubble would pop -- even last spring, as the Net was ramping up for the 2000 Webbies. But even if we lost an e-commerce portal or two, there is still a cornucopia of cool sites that didn't require $75 million in venture capital funding, and still deserve a Webby. Rumors of the Net's imminent demise have been greatly exaggerated. As Tiffany Shlain, the photogenic founder of the Webby Awards, puts it, "It's a good time for everyone to get together and realize that the people that have been in it for years are still there. It's back to 1996 again -- all the alternative sites, and one-man shops, and consistently excellent ones. It's like we went back to the roots, which I welcome. Last year was exhausting."

So far, signs are that the festivities are not being significantly scaled back. Already, the Webbies have thrown two parties just to celebrate the upcoming celebration. On April 27, sponsor Emporio Armani hosted a gala affair for the nominees in New York; on Thursday night, in San Francisco, the company will repeat the festivities for the West Coast crowd. And as for the July 18 Webby Awards party, it remains to be seen what, exactly, the entertainment will include -- will attendees be fed carpaccio or Tater Tots, microbrews or Amstel Light? -- but early signs are that it will not be a humble affair. The event is scheduled to take place at the prestigious San Francisco War Memorial Opera House, and the event's organizers expect a healthy 3,000 attendees -- more than last year's 2,000.

It also seems that despite the demise of so many promising dot-com sponsors, the Webby organizers aren't hurting for funds. Sponsors for this year's Webby Awards include Intel, Adobe, IDG, Metropolis Editorial, the Creative Group, Commission Junction, Diesel Design, Getty Images, rareMedium, Variety, Access Magazine, Wired, Entertainment Weekly and Earthlink. "Will we be more conscious with money because we're in a downturn?" asks Shlain. "Yes, everyone is. We are sensitive to the place that we're in."

Plenty of the event's contributors actually help out for free -- all food is donated, for example, and the performers pitch in for cheap. "What you see at the event is a lot of people coming together; it probably looks a lot more expensive than it is," Shlain explains. "It's like a big collaborative art project in some ways. And the group of contributors has actually grown."

So, yes, the party continues. But what about the attendees? According to Webmergers, some 435 Internet companies have shut down since January 2000, with half of those dot-coms failing in the last five months. A doomsayer might predict that there won't be any dot-coms left by July to give an award to -- and that attendees may need to downgrade their Gucci duds to, say, bargain-rack DKNY.

But it's interesting to look at the list of last year's nominees and do some quick math. Of the 135 sites nominated last year, five companies -- eToys.com, Garden.com, Kozmo.com, ProteinTV and Desktop.com -- no longer exist; according to press accounts, Swoon.com will soon be shuttered as well. A few other past nominees have had to revamp their products or business models: Wirebreak stopped producing films for the Web and is focusing on television instead, and e-tailer MobShop has reinvented itself as a "B2B service." Napster, of course, is in a daily battle with the Recording Industry Association of America that threatens to terminate the service for good.

Meanwhile, nominees Atom Films and Shockwave merged; OnHealth was acquired by WebMD; BabyCenter was sold to Johnson & Johnson (just before its previous owner, eToys.com, went bankrupt); troubled Farmclub.com is being folded into GetMusic.com; Preview Travel was bought by Travelocity; and WiredPlanet was bought by Listen.com, which subsequently began layoffs. And then there are companies that have been struggling through layoffs and executive departures, including MamaMedia.com, Oxygen.com, MTV.com, Stamps.com, Quokka.com, Webvan.com, Epinions, Evite, Nerve.com and Salon.com; some of these, such as Webvan, appear to be taking their last gasp.

All told, at least 25 of last year's nominees have either shut down, are in dire financial straits, or have had to merge with or sell to a competitor. That's roughly 18 percent of last year's nominees. (The 2001 nominees also include a few troubled souls, such as ChickClick, SonicNet, Inside.com and Blogger.com, all of which have undergone layoffs or mergers in recent months.)

A sign of the times? Certainly. But it's also worth noting that these troubled companies were primarily nominated for "commerce" or "service" Webby Awards, while a few others were classified under broadband, music or TV. Meanwhile, there were over 100 art, activism, education, community, humor, personal and just plain weird Web sites that apparently sat out last year's storm without getting the slightest bit damp. Sixty percent of this year's nominees have nothing to do with commerce whatsoever, says Shlain: "The Net is about more than dot-com. It's dot-com, it's dot-edu, it's dot-org and dot-net and dot-gov."

She adds, "Last year people would say to us, 'Why don't you judge based on stock prices or traffic reports?' That's not a barometer for excellence. And this year all the companies that people were judging by that criterion are gone."

Incidentally, this year's Webbies include 12 foreign sites, and the judges have renominated no fewer than 17 of the same sites as last year: Protest Net, Craig's List, Hint Fashion Magazine, PayPal, Gamasutra, Thrive Online, the Onion, Africam, Epicurious, Sputnik 7, News.com, Salon.com, CNN AllPolitics, Feed, Nerve.com, ESPN.com and Disinfo.com. The Webby Awards have always been plagued by extreme repetition -- is this a sign of industry consolidation, lack of competition or lack of originality? Or is it simply because repeat nominees are just so stellar that no one could possibly compare?

Maybe the message that's to be gleaned from the 2001 Webby Awards is that the Internet is slowly returning to its roots. Forget the one-hour video delivery and whiz-bang e-commerce promises: The Net is a more friendly host to personal and academic projects, to zines and communities that don't require staffs of 200, to informational Web sites and the simply zany. These corners of the Web not only flourish but ultimately offer more depth and originality than an online garden tool portal. That in itself is a reason for the Webby Awards attendees to quaff a vodka cocktail or two in celebration.

One last note: The doom-and-gloom Web site FuckedCompany is also nominated for a Webby this year. The category it's been nominated in? Humor.