The state Legislature casts him in the same league as Hitler. A science educator says it's going to be a rough year for evolutionists. 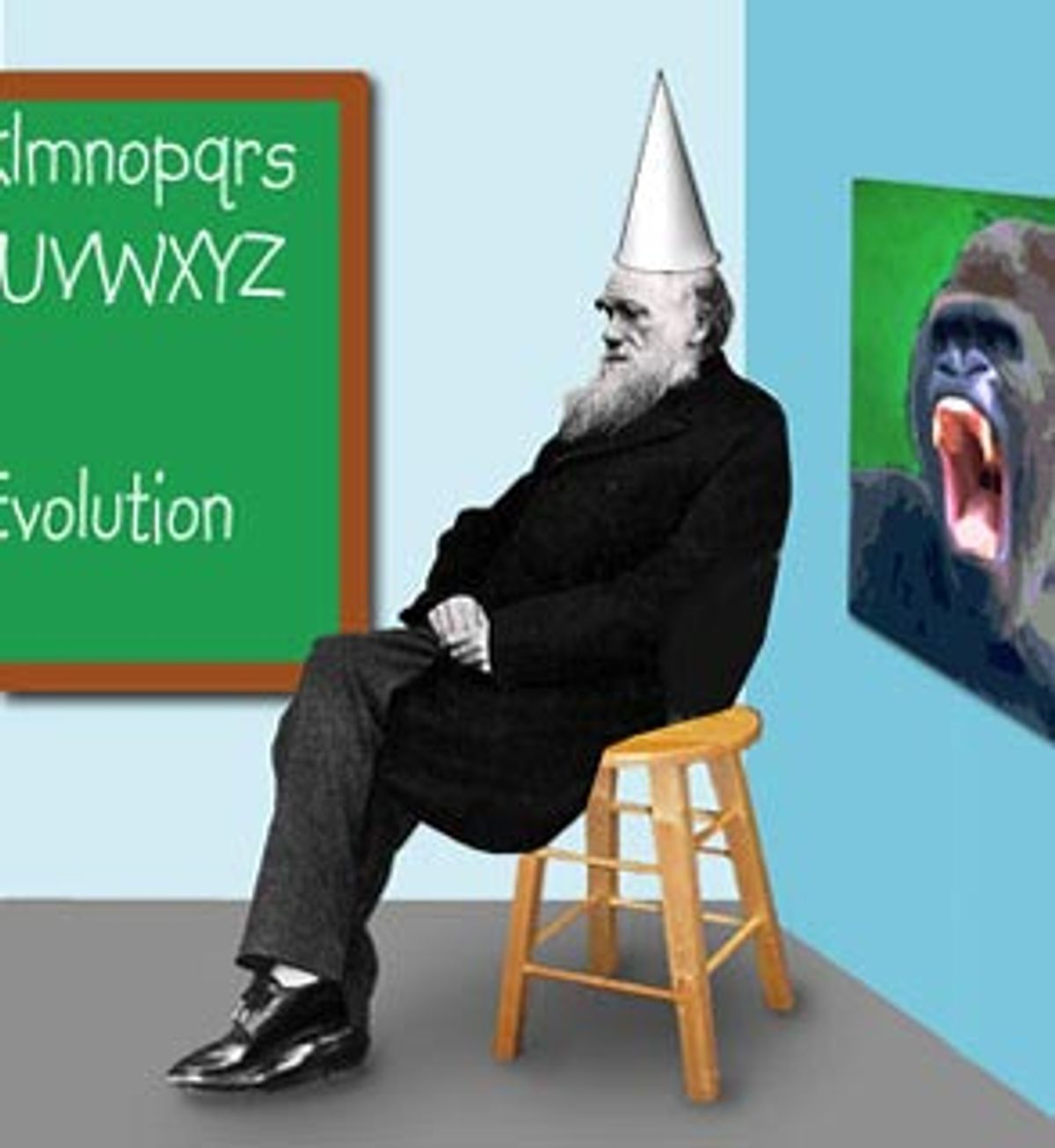 According to a measure before the Louisiana Legislature, one of the towering figures of modern science is also responsible for the racist ideologies of the late 19th century and for Adolf Hitler's persecution of Jews. Louisiana state Rep. Sharon Broome, D-Baton Rouge, who sponsored the resolution condemning Charles Darwin's theory of evolution, said it would "shine a light on the history of racism."

"Be it resolved that the Legislature of Louisiana does hereby deplore all instances and ideologies of racism, and does hereby reject the core concepts of Darwinist ideology that certain races and classes of humans are inherently superior to others," reads the Legislature's statement, which was approved 9-5 Tuesday by the state's House Education Committee. It will soon go before the full House.

Among Broome's pet peeves, according to the Baton Rouge Advocate, are that Darwin "teaches that some humans have evolved further than others." That he "holds that people of color are 'savages,'" and that in doing so he has "provided the main rationale for modern racism."

The resolution, which does not rise to the level of law and would not necessarily change the curriculum of public schools, nonetheless urges the state's education system "to address the commonalties of people groups and the weaknesses of Darwinian racism." Sponsors say their next step will be to press for evolution disclaimers in textbooks.

Critics say the race card is only another ploy by creationists to remove evolution from public education and replace it with the religious concept of divine creation.

Joseph Graves, a professor of African-American studies and evolutionary biology at Arizona State University, criticizes Broome's interpretation of Darwin's writings, arguing that history has shown the scientist to be "one of the good guys, not one of the bad guys." He also warns that the measure would open up the state to ridicule. "This type of thing would never happen in the Northeast," he says.

Yet Louisiana is not alone. Since the beginning of the year, a handful of states -- including Montana, Washington, Georgia and Michigan -- have proposed legislation and other measures against the teaching of evolution, using tactics that have taken a number of twists and turns.

The National Center for Science Education is a nonprofit organization that has fought to keep the teaching of evolution science in public classrooms. Executive director Eugenie Scott spoke with Salon about the latest efforts of creationists to make it more difficult to teach the theory of evolution.

Is this the first time that people have used the racist label to argue against the teaching of Darwin's theory of evolution?

Anti-evolutionists have played the race card, shall we say, for a long time. Unfortunately this perspective, that Darwin equals evolution equals racism, is one that is surprisingly prevalent in the black community. Every time I do a radio show on a station with a predominantly black listenership, someone invariably calls in and asks, "Well, why should our kids learn evolution? Evolution is just the source of racism."

Where does that idea come from?

That comes from confusing turn-of-the-century eugenics with evolution. [A]t the turn of the century there were a number of individuals who glommed on to evolution for rather nefarious purposes. The eugenicists, the free-market capitalists, then later on in the 20th century, Marxism and Hitler.

Now if you think about this, there's something fishy here. A single scientific idea cannot simultaneously be the inspiration for laissez-faire capitalism and Marxism, and then you toss in Nazism and you really have different systems, all claiming to grow from evolution. What you have here is a very powerful intellectual idea that is being seized upon by ideologues for their own purposes.

In what other states has this idea of Darwin as progenitor of racism come up?

It's unusual to have state-level legislation, but the idea itself is pervasive both in the anti-evolution literature from the creationists and also, unfortunately, in the black community.

I've only known of one previous situation in Tennessee in the early 1990s, legislation introduced by a black legislator there, anti-evolution legislation based on the idea that evolution is racist.

What impact will this have in Louisiana?

The really sad thing is that, by passing the resolution, they make it less likely that evolution is going to be taught in Louisiana, because any time you make evolution controversial, teachers just quietly stop teaching it.

If evolution is taught less frequently, you really are taking away one of the greatest weapons you have against racism. If people understand modern biology, and the modern genetically based theory of evolution, racism becomes impossible -- or at least scientifically indefensible. Given what we know about heredity, about population structure, about the way genes pass from one group to another group -- which is essential to understanding the process of evolution -- we know that there are no human populations that are older than others or more advanced than others, that are superior or inferior to others. That whole notion of being able to rank races goes out the window if you understand genetics and evolution.

I read that the next thing the proponents of this resolution want to do in Louisiana is put disclaimers in textbooks. What effect does that have on teaching?

A disclaimer in textbooks is a very intimidating gesture. Teachers don't like controversy. They just want to do their jobs. They like kids; they want them to learn.

That's the worst thing about them, and it just makes it more likely that evolution won't be taught, which of course is the goal. The second thing is that they really confuse the kids about what is science and what is religion, and they further confuse kids about the soundness of evolution as a science. Because only evolution is singled out among all scientific theories in these disclaimers.

Louisiana has a short memory, because there was a community in Louisiana, a parish called Tangipahoa, which was the site of a recent district court decision against the disclaimer. The Tangipahoa parish required teachers to read a disclaimer before they mentioned the "e" word, or showed a movie or assigned a reading or anything else. The disclaimer was struck down in district court and also lost in appeals court.

What do the disclaimers usually say?

Most use "just a theory" kind of language, which is very confusing as to the nature of science and how we use the word "theory" in science. But they also take the form of, we don't know everything there is to know about evolution and scientists are still trying to decide aspects of evolution, and we should therefore just teach it as a theory. Of course you could say the same thing about atomic theory or heliocentrism -- I mean there's always more that scientists can discover about a theory. But evolution happens to be the only scientific theory they single out like this. So clearly this is an effort to go after evolution, rather than just improve the general science education of students.

I read that there is similar legislation being considered in Arkansas.

The good news is that the Arkansas legislation did die; it was voted down, which we're very happy about. The Arkansas legislation was an anti-textbook legislation -- actually there's another bit of legislation under consideration in Louisiana that may be shadowing that. It was a very strangely worded piece, that said textbooks had to be "factually accurate" and because evolution, they said, was poorly supported in science, therefore you couldn't use textbooks that contained this whole laundry list of topics that are classic evolutionary topics.

Is this a new or an old tactic?

What other states are considering measures like this? I know the Kansas Board of Education made big news last year.

Well, that's the success story. They voted the rascals out in Kansas and went back to a really solid science-standards document.

We've had problems in Montana, Washington, Georgia, Michigan -- that's still going on. Somehow or another since the first of the year, we've had all of these state legislative problems. Ordinarily the largest number of problems we have are with creationism at the local school board level or the classroom level.

I think there may be a climate being generated for working religion into society. From Washington we're hearing this faith-based charities message. And the religious right is starting to flex its muscles, realizing it has friends in high places. And so even though the federal government has hardly anything to do with education at the local level, I think there's just a climate of opinion out there that, hey, we can really start pushing this stuff now.

We've never had so many pieces of legislation -- it's only been four months, and we've had seven states pushing this kind of legislation. I really hate to see it. There's a trickle-down effect when these things get publicized; the tendency is for local school boards to look into this issue as well. It's going to be a busy year.