Show me the mummy! 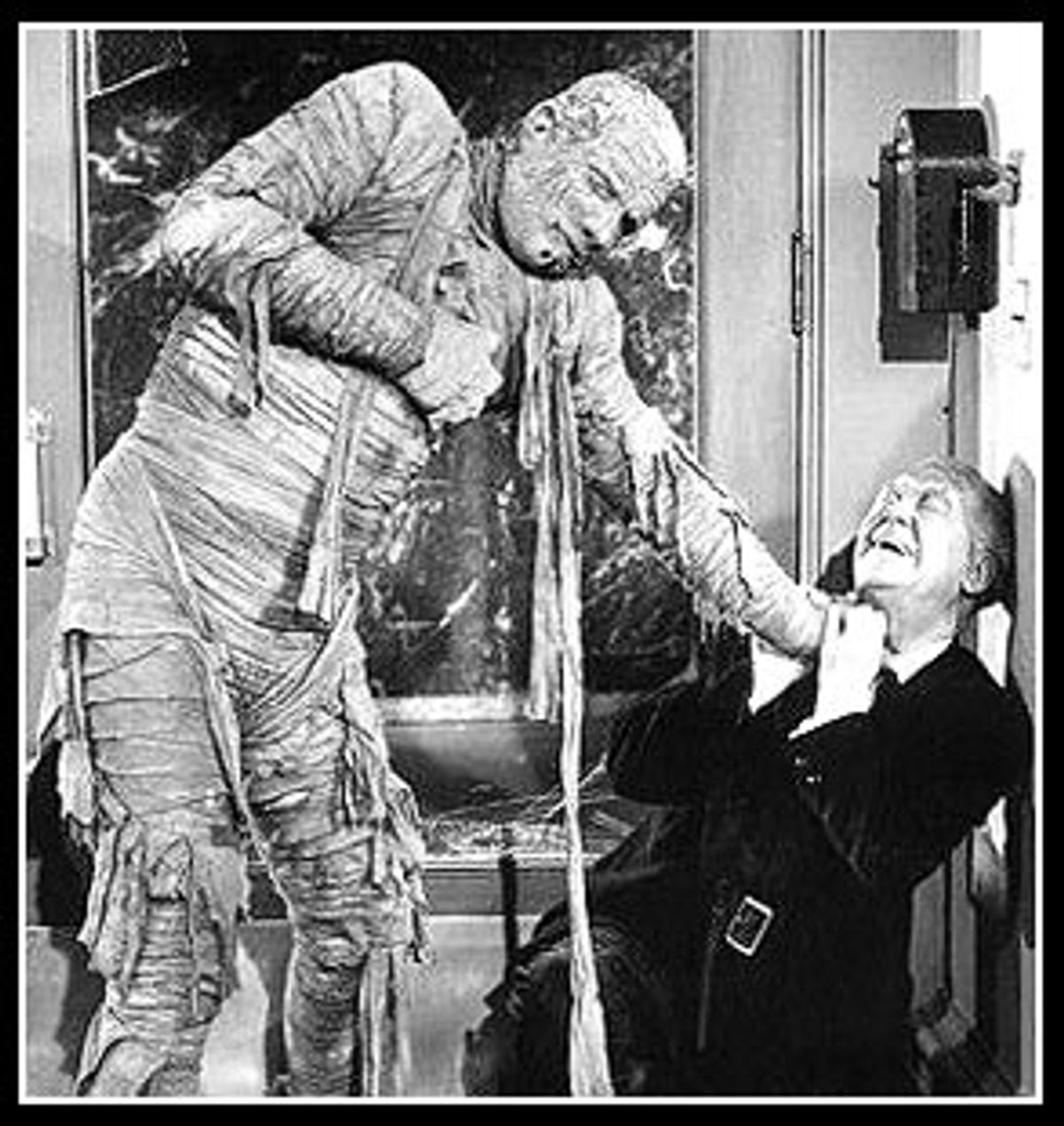 Nothing really changed for Bob Brier when he pulled the brain out through the dead man's nose. The brain, as it happened, had proven too viscous, so Brier, a logical sort, stuck his metal hook up the corpse's nose and stirred the brain into a consistency that would easily exit the head. Sure enough, when he rolled the body over, out poured the brains. It ain't gruesome, it's anatomy, Brier says.

Brier is a professor of philosophy at New York's Long Island University -- a credential that helps distinguish him in the eyes of the law from the less academic types who also enjoy corpse experimentation. In fact, Brier isn't only legal, he's famous: It was he who, after years of research, proclaimed King Tutankhamen's murderer to be Commander Aye, Tut's own advisor. Brier insisted that many had previously suggested Aye's guilt; nevertheless, he received worldwide attention for discovering the young king's assassin.

There is studying ancient Egypt, then there's being ancient Egypt. To Brier, in 1994, it seemed his next logical step as an Egyptologist was getting into character. "There are certain things you can only learn by doing it yourself," he told the Dallas Morning News at the time, and after years of poking at mummies, he decided to make his own. He did, and now, six years later, Brier has discovered that the project was a success.

To mummify a corpse, one needs a corpse. Brier's had no name, and to this day he has no idea who he gutted and wrapped. (He did have basic relevant medical information about his cadaver; a serial killer's body was rejected when evidence of hepatitis C showed up.) Likewise the donor's loved ones don't know that there's now a mummy in the family. In making his mummy, Brier duplicated Egyptian tradition down to the incense; this was the one exception: Where ancient mummifiers worked their craft on the rich and famous, Brier's crew wrapped a no-name.

Brier documents each of the mummification steps in the January/February issue of Archaeology magazine, from the abdominal incision to the wrapping. But long before he touched the body, Brier was in an area called Wadi Natrun, 60 miles from Cairo, collecting 400 pounds of natron. Natron, which Brier calls "basically baking soda and table salt," is the primary desiccant, or drying agent, in an Egyptian mummification.

He was meticulous: After he had the natron, he picked up frankincense and myrrh in a Cairo spice market, imported palm wine from Nigeria (for flushing the abdominal cavity) and had a silversmith manufacture the bronze and copper knives, using the same percentage of tin that the Egyptians used.

Following the removal of the brain, Brier made a small slit in the gut with an obsidian flake. Once he got his hand inside, he proceeded to remove each organ. The liver, he said, "popped out, much like a newborn."

Next came the drying. With the body emptied of its organs, Brier and his team set the cadaver on an embalming board and covered it with natron. They then left it (in conditions roughly similar to those of a tomb in Egypt's Valley of the Kings -- 105 degrees Fahrenheit, very low humidity) for 35 days. The corpse smelled when they returned, but the natron had successfully dehydrated the body. The team wrapped it in pure white linen and the job was done.

Why so fastidious? (The abdominal incision, for example, presented a great conundrum for Brier: At 3 and a half inches, it wasn't big enough to get the organs out. After much deliberation, he made the cut a half inch longer.) Egyptians went to great lengths to avoid scarring the body, and the reason for this points up a common misconception about their take on death.

"Most people think they [believed in] reincarnation," Brier says. "But they were, in fact, resurrectionists."

Whereas reincarnation has a soul returning to Earth in a new form -- think Hinduism and Buddhism -- resurrection means using the same body in a different world. Consequently, it made sense to carve up the corpse as little as possible. (Egyptians also knew where death happened: in the west, where the sun set. The dead, consequently, were "Westerners." When you died, it was said you were going west.)

Not that Brier believes any of this. For all the energy he devotes to ancient Egypt's ideas on death, his are simple: There will be no resurrection.

"People worry about sacrilege," he says, referring to his tampering with the dead. "But I think it's just the end."

Not one to linger in metaphysics, Brier prefers direct research. There's a little Martha Stewart in his meticulous fascination with technique. "It was now time for the final wrapping, and our big surprise," he enthuses in his Archaeology article. Like Stewart, his lack of self-consciousness is slightly charming, mainly amazing. This is a dead man, withered and blackened, and Brier doesn't really seem to notice.

"It becomes objectified," Brier says. "You forget you're working with a person."

Indeed, he's too focused on details to dwell on the big picture. The surprise in the procedure was that a dehydrated body doesn't make for flexible limbs. Without a little fluid in the joints, the body's arms will snap if bent over the chest. It was his most important finding, Brier says, and his team was forced to flout tradition and leave the arms by the sides of the body.

Brier wrapped the last finger in 1994, so why an article in Archaeology years later? After half a decade at room temperature, the mummy is finally old enough to evaluate. And according to Brier, it was a success.

"It was better than we could have hoped for," he says. "There was no bacteria attacking it."

This means Brier's mummy could help researchers understand why it's been so hard to replicate lengthy DNA sequences found in ancient mummies.

"DNA studies in mummies may also hold the answers to many Egyptological questions," he says. "We may be able to establish the origins of the Egyptians, and we may also be able to identify unknown royal mummies."

For all the fuss about Brier, his isn't the only mummy game in town. Far from the university, way beyond Egyptology's purview, a Salt Lake City man who owns his own miniature pyramid has 1,300 bodies waiting to become mummies. The paperwork's done -- the bodies just have to become dead.

For a price, Summum Ra, aka Amen Ra, aka Claude Nowell, president of an organization called Summum, will preserve your corpse exactly as it is. For a smaller price, he'll preserve your pet's. Ra holds the patent on this type of mummification -- it uses a generous portion of Fiberglas to keep the skin from withering --- and as he tells it, it's a better wrap than Brier's.

If Ra sounds like a salesman, it's because he is. In addition to being the country's only legal commercial mummy maker, he's a genuine religious leader. The Summum organization may make mummies, but first and foremost it's an official religion.

"Through the reincarnation of an incarnate Master, the flame of Summum burns on," the literature says. "Although Summum has not always been 'registered' with governments and nations, it has always existed."

As with any decent religion, the perks will cost you. Ideally, Summum would offer mummification free of charge, its Web site says. Things aren't ideal, apparently -- the company charges a total of $71,000 and up, depending on the mausoleum arrangement you reach with your cemetery, and the price of transporting your body to Salt Lake City. Since Summum is nonprofit, this is a suggested donation.

But the mummification racket does more than finance the spirituality -- it enables it. Preserving the human vessel, it turns out, is crucial to the Summum faith, which holds that a kind of cloning will occur after death. Unlike the Egyptians, it's reincarnation, not resurrection, they're waiting for.

"With mummification you're remembered," Ra writes, describing the extent to which his process preserves the body. "Your mummiform is a reminder of what your life was about."

It's enough for Mohamed al-Fayed, father of the late Dodi Fayed, lover of Princess Diana. According to Ra, the Harrods owner has signed on to become a mummy, when the time is right. Another customer-in-waiting, Sue Menu, made the decision long ago.

"It just felt like it was what I wanted to have done," Menu told ABC News last year. "To be honest, I hadn't really thought much about it because I was fairly young and I hadn't really even thought about death."

Ra's got a good angle, pitching mummification as an alternative to the increasingly unpopular funeral industry. He makes a good case against traditional funeral homes, which have often been accused of exaggerating the effectiveness of embalming.

"Until the late '70s or '80s, the funeral industry allowed people to believe their bodies would stay looking like new once they were embalmed," Ra says. "But that's not what happened. People paid all this money for a rotten pile of mush."

(The Federal Trade Commission has ruled that funeral directors must divulge, at some point in their talk to customers, that the body will decompose.)

Ra picked up his distaste for the funeral industry in the '70s, when he had friends there. A little research, a patent and 30 mummifications later -- the bodies had been "intransigents," acquired by a medical school -- Ra almost quit his day job.

Ra isn't afraid to go after your business. He's quick to remind you of his patent, and he might even throw in a diss to Brier's brand of mummification.

"There are absolutely no signs of decay in our mummy," he contends. "The folks in Utah don't do mummification the Egyptian way, so I don't have much to say."

Like all great brain removers, Ra and Brier see their differences more clearly than their similarities. The two share not only a passion for mummification, but a seriousness about it, too. Each is matter-of-fact about his line of work. Both eschew the opportunity to comment on popular culture's bizarrely enduring interest in the various curses of the mummy. Likewise, neither is particularly inclined to repeat the mummy jokes they hear all the time. They rarely shroud themselves in toilet paper on Halloween, or laugh at "unravel" puns, and they certainly don't end their conversations by saying, "That's a wrap."

While Ra continues to sell the faith-based variety, Brier has since moved on to natural mummies. He's in and out of the Argentinian Andes these days, studying the perfectly mummified corpses of three Incan children. Frozen in snow for hundreds of years, the bodies "look like they're sleeping." And maybe this touches what we like about mummies -- they're dead, but not overwhelmingly so.