Back from the dead -- it's "Saturday Night Live"!

Led by Tina Fey and Jimmy Fallon, an enlivened show reverberates with the sweet thwack of jokes hit out of the park. 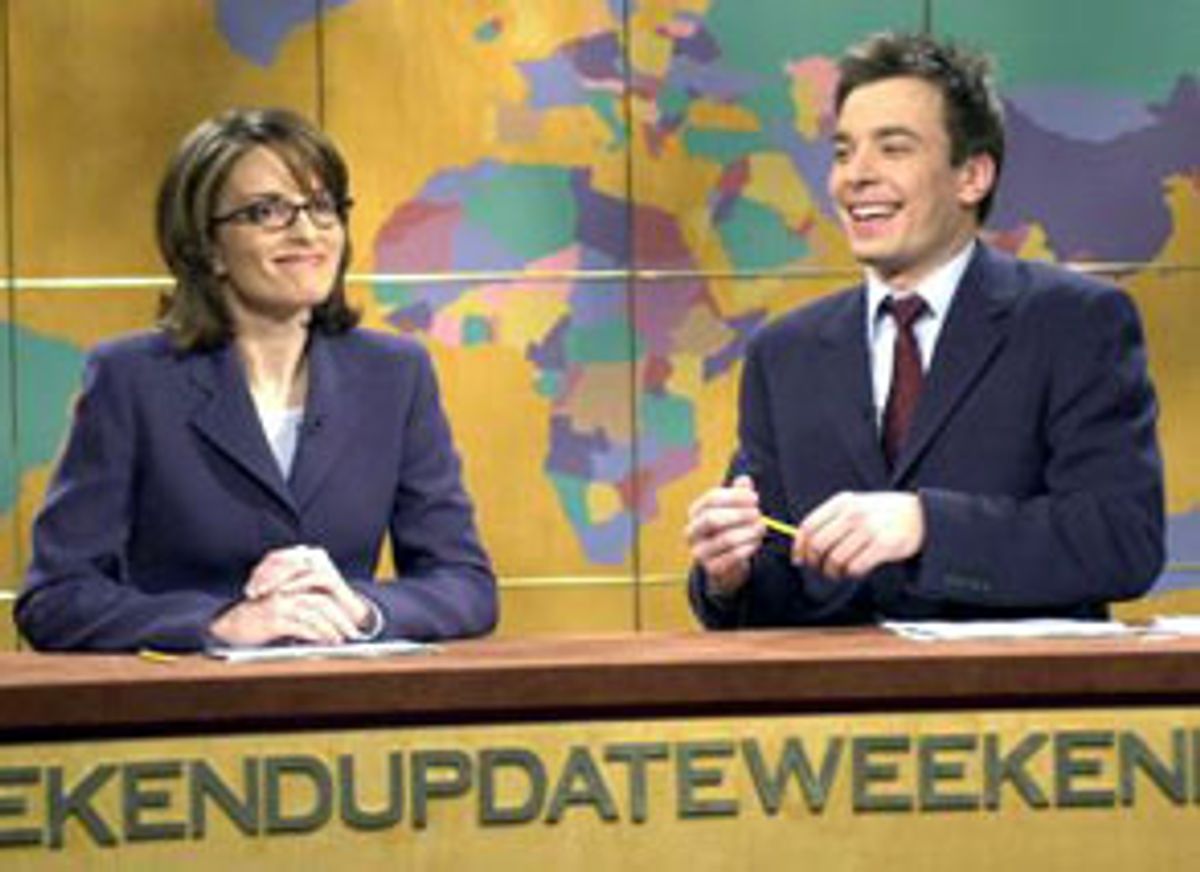 To paraphrase legendary "Weekend Update" sportscaster Chico Escuela, "Saturday Night Live" has been "bera, bera good" this season. And a lot of the credit goes to the show's head writer, Tina Fey, who co-anchors the "Weekend Update" mock newscast with Jimmy Fallon.

Fallon and Fey (as they're billed, like an old vaudeville team) have turned a dead-air segment of "SNL" into don't-touch-that-remote television. In Fallon and Fey's hands, "Weekend Update" surges with fearless topical satire. It reverberates with the sweet thwack of jokes hit out of the park. After the long bathroom break that was the Colin Quinn/Norm Macdonald era, "Weekend Update" is funny again. I think this may be one of the portents of the Apocalypse.

Fallon and Fey (oh, how I love to say those names) don't try to spoof serious newscasters, like Dan Aykroyd and Jane Curtin did in their classic stint on "Weekend Update," nor do they show off how smart they are (and we're not), like former "Weekend Update" anchor Dennis Miller. Instead, watching Fallon and Fey is like hanging out in a cafe, perusing the New York Times with two intelligent, funny people who find the news as maddening and absurd as you do.

The 30-year-old Fey, who became the show's first female head writer in 1999, has a sparkly-smart, appealingly unaffected manner. Fey's delivery is both bright and sly; when a joke is particularly savage, she might put a hand over her mouth in a mock, girly "Oops!" pantomime. With her delicate features, black-rimmed glasses and pert, flippy hairdo, she reminds you of Marlo Thomas in "That Girl" -- if That Girl had been a heat-seeking missile of verbal comic destruction.

A Fey joke is a thing of beauty -- precisely worded, lethally barbed, deliciously silly. Here are some of her best:

"Gale Norton, President Bush's controversial nominee for secretary of the interior, told a Senate committee this week, 'I intend to make the conservation of America's national treasures my highest priority.' At the top of her list is the American Bald Oil Magnate."

"Despite explosive violence in the West Bank this week, negotiators remain hopeful that a U.S.-sponsored summit could end the conflict. Israeli and Palestinian officials say they are eager to sign an agreement so they can dip it in gasoline, light it on fire and throw it at each other."

"O.J. Simpson is once again facing criminal charges for a road rage incident in which Simpson violently ripped the glasses off a man's head. On a positive note, this time he left the head."

"In Washington last week, officials from the National Rifle Association met with a group of 200 high school students. There were no survivors."

The pairing of Fey with the boyish Fallon was inspired; in newscaster mode, wearing a jacket and tie with his hair gelled into semiruly spikes, Fallon looks like a teenager putting on a show with his big sister. Fallon has a light, deadpan touch with the mock news. But he's at his best elsewhere on the show, when he's not constricted by a desk.

A great mimic, Fallon's finest "Weekend Update" performance of the season came in December, the week after U2 appeared on the show. Singing Christmas lyrics to "Beautiful Day," Fallon donned black wraparound shades, climbed over the desk and did an electrifying impression of Bono's overamped "SNL" performance, complete with plunges into the audience and sloppy kisses planted on the camera lens.

Fallon and Fey are also costars (of sorts) in the "Sully and Denise" sketches, which are written by Fey and feature Fallon as Boston teenager Pat Sullivan and the exuberant, Gilda Radner-esque Rachel Dratch as his on-again, off-again girlfriend, Denise. "Sully and Denise" are the videotaped adventures (a silent pal named Tommy mans the camera) of smart-mouthed teens in search of the eternal pah-ty, Boston style. This usually means hanging out in front of the "Cumbahland Fahms" convenience store, hopin' that an older friend -- maybe the legendary Donny Bahtalotti (played by Ben Affleck) -- will show up to score some beer. Much hailing of Red Sox star "Nomah!" and exchanges of "Wicked pissah!" salutations ensue.

Yeah, I guess it's funnier if you're from Boston. But, I swear, "Sully and Denise" awesomely nails the depressing cheap thrills of a cold Massachusetts night with a six of 'Gansett and nowhere to drink it.

But Fallon and Fey are by no means the only reason "Saturday Night Live" is good -- no, important -- again. About to wrap up its 25th season, "SNL" has one of its most prodigiously talented casts ever. The stars (well, I guess Molly Shannon, Cheri Oteri and Tim Meadows are considered stars) have all departed, but the remaining Not Ready for Prime Time Players are a solid, versatile bunch. And they're helped immensely by writing that's more consistent than it has been in years.

Ooh, wait -- don't forget the Destiny's Child spoof group "Gemini's Twin," consisting of Gasteyer, Maya Rudolph and whatever female guest host is rolling through that week. And Robert Smigel's rambunctious "TV Funhouse" cartoons, especially the one where Bryant Gumbel tries to commit suicide 18 different ways while interviewing "Survivor" castoffs on "The Early Show." And Bush (Ferrell) and Gore (Hammond) as "The Odd Couple." And the entire show hosted by Conan O'Brien. (The old-time Irish bare-knuckles boxer skit was a brilliant match of guest host and material.) And Dratch's breathtaking impersonation of an unhinged and foulmouthed Anne Robinson berating contestants on "Weakest Link."

OK, there's still a stubborn tendency to stretch thin skits to unbearable lengths and to indulge some of the players' more unfortunate creations -- please Chris Kattan, give us less Peepers and more Mango. (Fans who think they can do better than the "SNL" writing staff have been penning skits -- with results as uneven as the real thing -- for the Saturday Night You Web site, which is unaffiliated with the show. Give it a shot.) But when the writing is smoking, "Saturday Night Live" achieves something I never thought I'd see again. It creates the kind of excitement it did in the early days, back when watching it was a dorm-room ritual that made you feel like you were receiving a secret transmission from the coolest people on the planet.