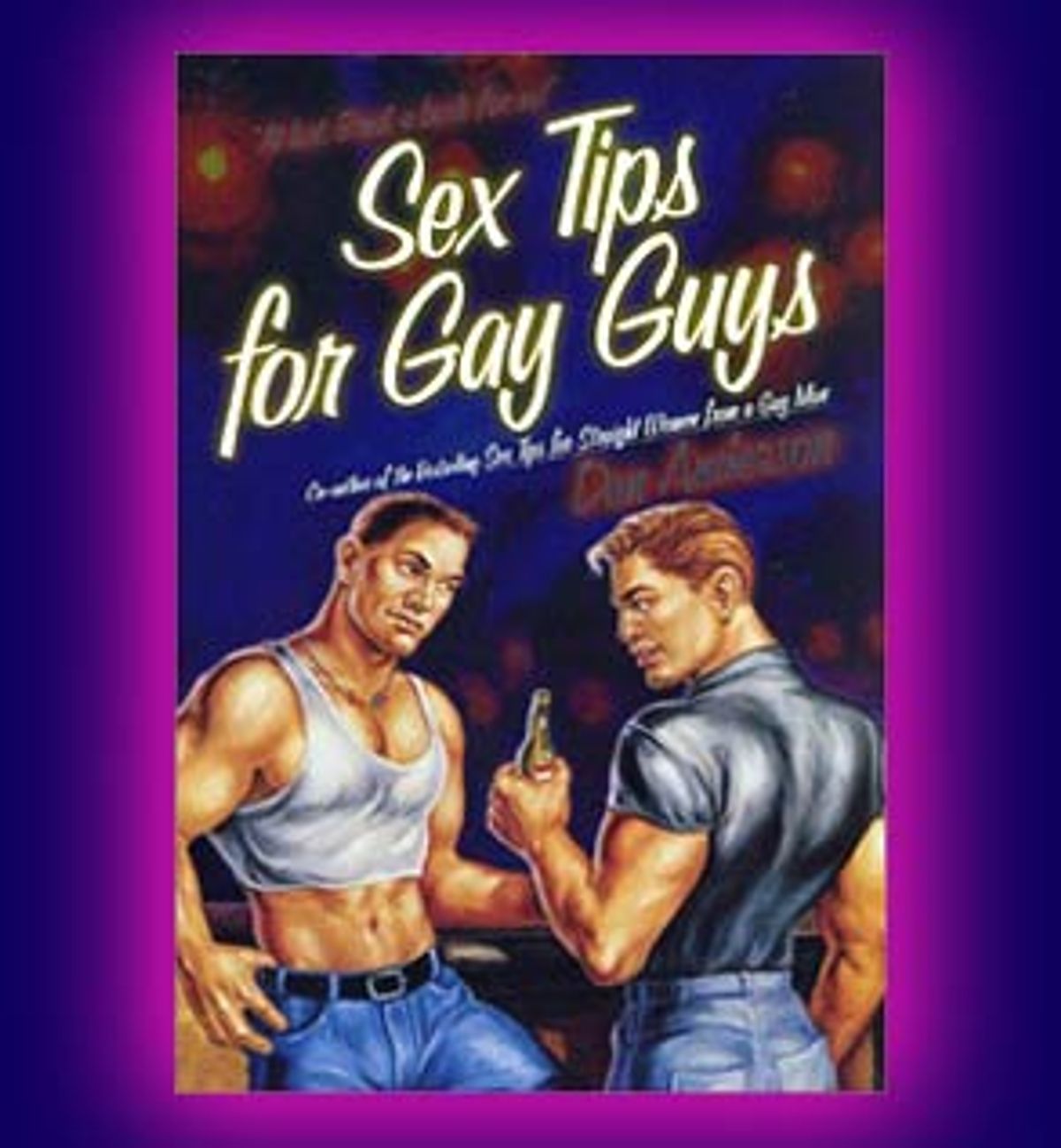 Dan Anderson can't let a good gimmick go -- and I guess there's no particular reason why he should. Several years back he hit pay dirt with "Sex Tips for Straight Women From a Gay Man," reasoning -- quite reasonably, in my humble opinion -- that straight gals could probably pick up a few penis-pleasing skills from their homo colleagues.

It was a brilliant device. After all, why shouldn't someone let women in on the secret of how to give a great blow job? Why shouldn't straight men get to enjoy all the delights that gay men have shown each other for centuries? (Of course, I hated Anderson for thinking of it first. Why the hell wasn't I the one to rake in the bucks by sharing my vast experience in this field of endeavor?)

Now Anderson has returned with his second volume of whoopee advice: "Sex Tips for Gay Guys." Like its predecessor, this is a slight but sassy volume, silly but often entertaining. Still, it does raise the question: Who needs it? Is it worth $22.95? (That's $35.99 in Canadian change, according to the book jacket, but they're more desperate up there.) And wouldn't it make more sense just to wait for the inevitable paperback?

If you're a gay guy who has been around the block, or even just down the street, "Sex Tips for Gay Guys" won't teach you anything about lovemaking that you don't already know. But wait, I take that back. I did appreciate one or two hints. I may have to try popping an ice cube in my mouth the next time I go down on someone. And I'd never heard the term "teabagging," which involves -- well, check out Page 94 if you need to learn more.

Although it clocks in at more than 200 pages, this book takes all of about 12 minutes to read. Actually, it was more like an hour or so, but it breezed by so quickly it seemed like 12 minutes. And much of the copy feels like filler. You can almost hear the publisher saying, "OK, now, just a little more padding and we've got a whole book."

So none of the "sex tips" amounts to much. If you're seeking substance about romance and love, read "Anna Karenina" or "Remembrance of Things Past," because substance really isn't the point here. A good chuckle -- even an occasional belly laugh -- is. And on that score, the book often delivers.

For example, I loved this description of what a leatherman shoves under his coffee table: Vanity Fair, Bon Appetit and a "cheesy cut-crystal ashtray from his mother in Buffalo." And since I've lived (and messed around) in Russia, I also enjoyed the suggestion that you can attain heightened sexual intensity by making love "during an attempted coup in the former Soviet Union -- the world in crisis, always an aphrodisiac."

The parts I found funniest were those that reminded me of my own wild days about 300 years ago. Like this: "If you fool around a lot when you're young, it can also be your chance to see the interiors of lots of chichi apartment buildings that you'd otherwise have to wait years to be invited to." Yes, how true: The penthouses and designer lofts were often more thrilling than the sex.

And then there's this on stalking the guy you're obsessed with: "In the old days, you could simply pick up the phone, call, and hang up, but the advent of caller ID has pretty much squashed that tactic, so now we're forced into drive-bys, hangout hunts, and the occasional use of a friend's phone." (In California, though, we're lucky enough to have the right to select a "caller-ID-blocking" feature, so the call-and-hang-up strategy is still operable -- unless your target has opted for a phone feature that automatically rejects calls from caller-ID-blocked numbers. There are always public telephones, too.)

The book does have some annoying qualities. The one that bugged me the most was Anderson's cutesy tendency to add an "m" before every word starting with "en" or "an" and "s" before every word starting with "ex": "mentertainment," "manthropological," "manticipation," "sexperience," "sexcavation." You get the point. It wears thin very quickly. So does dubbing the dick "Mr. Happy" or "Mr. Stiffy" and similar linguistic quirks.

But no matter. You'll be done with the book practically before you start it, so you won't stay irritated for long.