What is Washington trying to hide?

The government outsources the war on drugs so it can point fingers at the private sector when the body bags start pouring in. 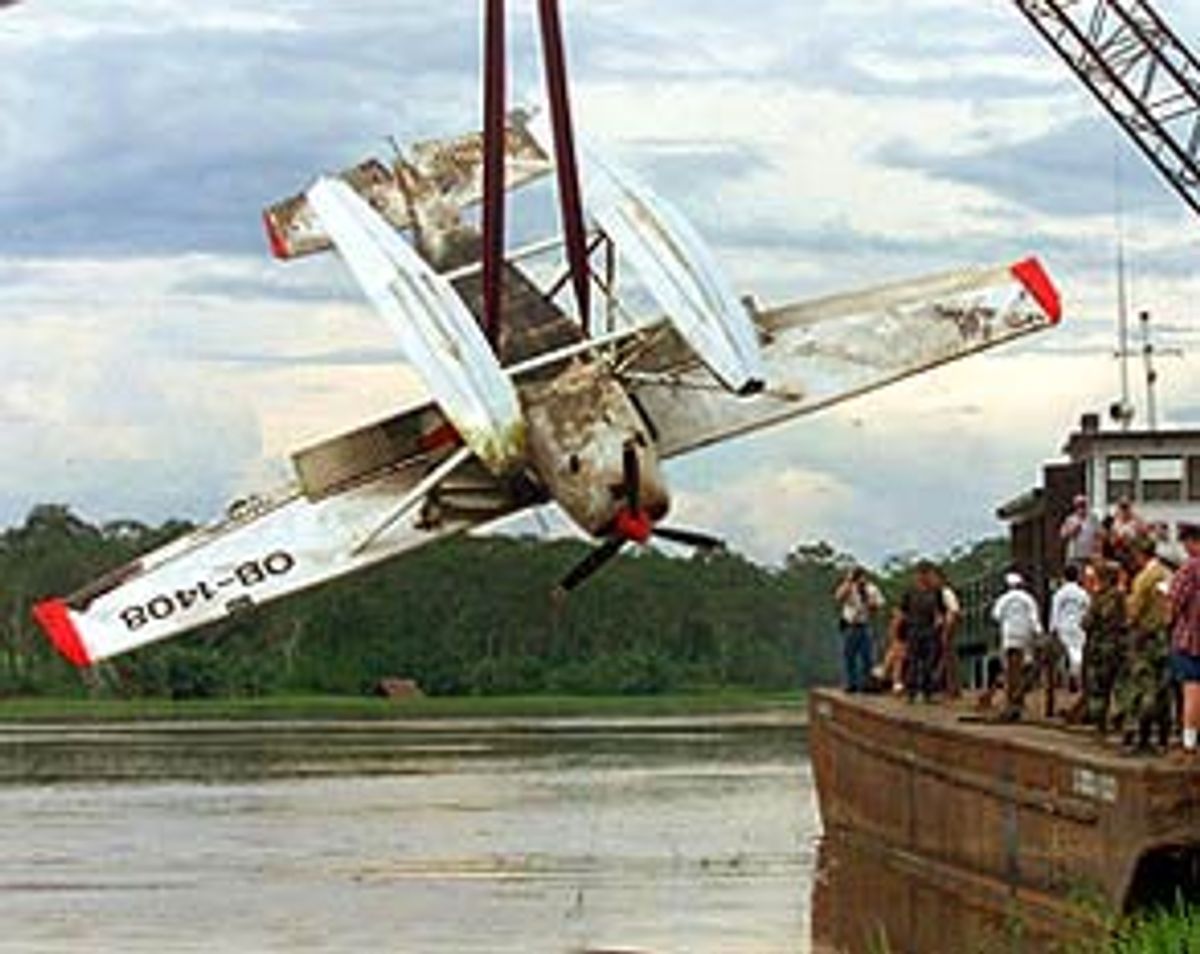 When longtime drug warriors like Rep. Dan Burton, R-Ind., and Rep. Mark Souder, R-Ind., start blasting American anti-drug efforts in Latin America, you know that something is rotten in Peru. And Colombia. And Washington.

That's exactly what happened last week when representatives of the State Department, the Drug Enforcement Administration, U.S. Customs and the drug czar's office appeared in front of the House Committee on Government Reform to discuss the United States' role in the midair murder of an American missionary and her infant daughter last month in Peru.

Well, not exactly "discuss." More like equivocate and pass the buck. Just another day on the Hill for drug warriors. It's as if these apparatchiks had all morphed into a famous character from that other war: Sgt. Schultz from "Hogan's Heroes." They knew "noth-ing"! How many planes have been shot down over the years? They didn't know. Who had ultimate authority over the CIA contractors who fingered the plane? Nobody could say. How many different contractors are being used in the drug war down there? Dunno.

Their continual stonewalling made Burton pricklier than that mean woman on "Weakest Link." "When Americans are killed, why does it take so long to get an explanation?" fumed Burton. "It seems like we're pulling teeth to get it." Souder was equally apoplectic: "We're conservative Republicans who have carried the ball for the drug war, but you're making it very difficult for us."

But at least these guys showed up. The CIA, the key U.S. player in the Peruvian shoot-down, didn't even bother.

So why all the secrecy and obfuscation? Just what is it they're trying to hide?

Perhaps it's the fact that our government is funding a war being conducted by hundreds of American citizens, working for private security companies with innocuous-sounding names like DynCorp, AirScan and Military Professional Resources Inc.

It's a classic end run. When Congress agreed to fund last year's $1.3 billion aid package to Colombia, the approval came with strict limitations on the number of U.S. military personnel that could be deployed in the region (500) and a prohibition on those troops engaging in combat-related tasks. But these private military contractors -- mostly made up of one-time U.S. soldiers and paid for with our tax dollars -- don't have to abide by any such rules.

It's hard to know exactly how much these corporate soldiers are costing us, since many of them are being funded out of the CIA's so-called black budget -- but the dollar figure is estimated to be over $1 billion.

DynCorp alone is being paid $600 million by the State Department to help in drug eradication and interdiction. But in February, DynCorp pilots ended up in a firefight with left-wing guerrillas. Yet the U.S. government is still claiming that we're not being dragged into Colombia's civil war.

"American taxpayers," says Rep. Jan Schakowsky, D-Ill., a vocal critic of the private armies, "already pay $300 billion a year to fund the world's most powerful military. Why should they have to pay a second time in order to privatize our operations?" Schakowsky has recently introduced legislation that would ban the government from using these private companies to help fight the drug war.

"Power exercised in secret," said former Sen. William Proxmire, "especially under the cloak of national security, is doubly dangerous." Now the cloak is the drug war, but the secrecy and lack of accountability are just as dangerous.

Outsourcing the war makes it possible to proceed with a policy without having to defend it in public -- or having to deal with those annoying body bags and flag-draped coffins. As Myles Frechette, the former U.S. ambassador to Colombia, put it: "It's very handy to have an outfit not part of the U.S. armed forces, obviously. If somebody gets killed or whatever, you can say they're not a member of the armed forces."

It's a political twist on the old philosophical conundrum: If Americans are blown to pieces in a South American forest but no one hears about it, did they really die? And if they did, would it lead to a privatized Gulf of Tonkin incident?