Gloom at the top

Get a bunch of bestselling authors together and what do they talk about? The agonies of success. 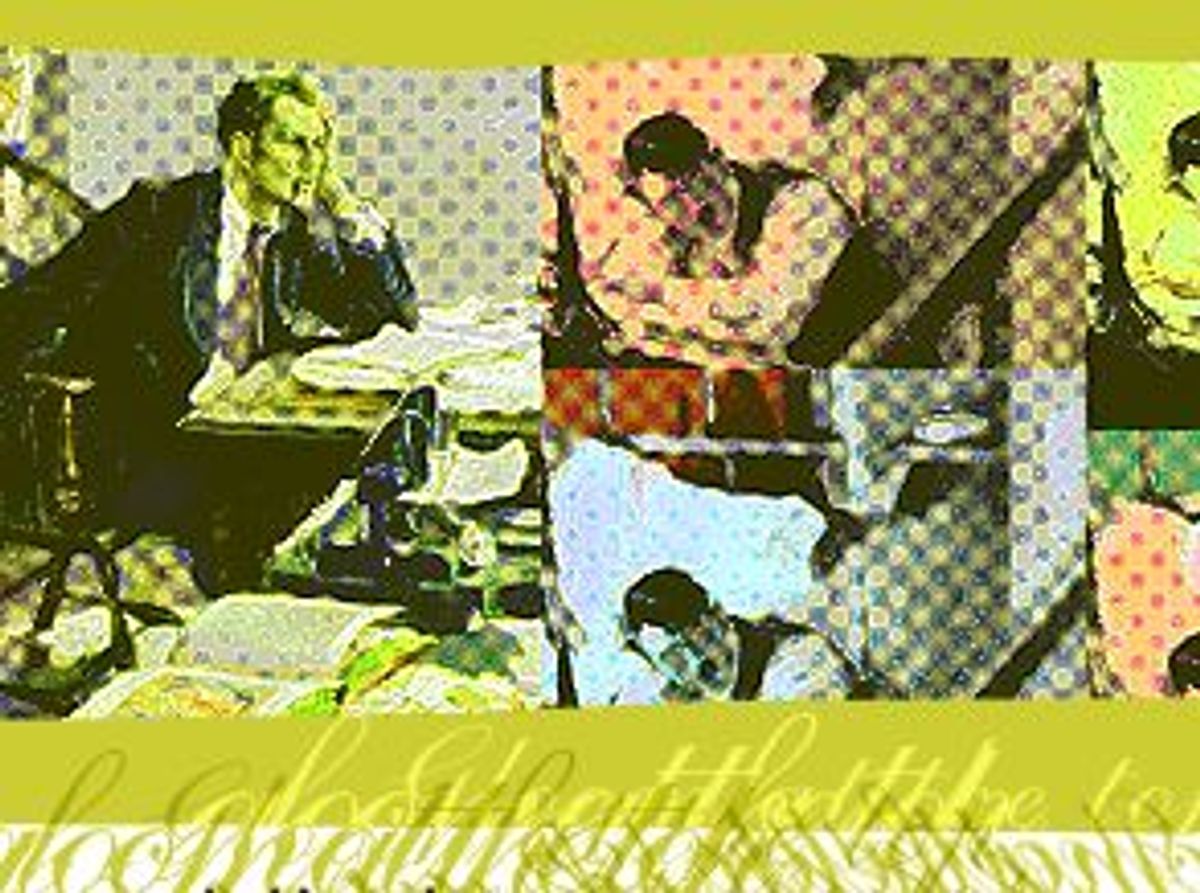 Anyone who's ever attended panel discussions featuring authors can testify that, whatever the designated topic, the event will almost certainly devolve into a chorus of lamentations over the hardships of the writing life. There seems to be no end to the things writers should get, but all too often don't -- appreciation, attention, financial reward.

Still, Monday night's panel at New York's Society for Ethical Culture promised to be an exception. The theme was "So What Do I Do for An Encore?" and the panelists were five authors who had achieved the kind of success that most writers would kill for. Here, at last, was a likely occasion for authors to do something besides complain about their lot.

The event was ominously kicked off when Letty Cottin Pogrebin, the president of the Authors' Guild, the panel's sponsor, described people who write books as an "oppressed class." As the evening wore on, it became clear that anyone who'd shown up hoping to admire a glowing, happy pantheon of literary winners was out of luck. It seems that authors who can't reasonably gripe about their lack of financial or critical success will still find plenty of other things to complain about.

The panelists were introduced with all the kvelling of a grandmother at a high-end bar mitzvah -- just substitute the number of weeks spent on the New York Times Bestseller list for SAT scores. The evening's moderator, a genial if slightly distracted Frank McCourt, author of the almost universally beloved "Angela's Ashes" (117 weeks!) confessed at the start that this was his first moderating gig and that his wife had been bugging him all day to prepare for it, clearly to no avail.

McCourt introduced the panelists: Mitch Albom, author of the unstoppable inspirational title "Tuesdays with Morrie" (200 weeks!); Erica Jong, whose 1974 novel "Fear of Flying," McCourt said, "at one time blazed across the sky" (after reading it, McCourt confided, he "had to go to confession"); Mary Karr, who scored with her memoir "The Liar's Club" (67 weeks!); and James McBride, who hit the big time with his memoir "The Color of Water" (2 years!).

Albom was the first to detail the trials attendant on success, noting that after "Tuesdays With Morrie" he wasn't able to even start another book for two years. He had set out to write "Tuesdays" strictly as a "labor of love," he said, intending only to help pay some of Morrie's medical bills. At the time it seemed like a risk -- his agent warned him that the book would ruin his sportswriting career. When the book "became the book it became," Albom's crisis was only beginning. "There was demand for more. I resisted," he said, partly because he "hates the kind of self-help book that says, 'the secret to life is in the next book.'" He felt trapped, he said, by his own anti-sequel "heel-digging." "We're just now going to publishers with ideas for another book. It was a pretty paralyzing experience," he concluded.

Jong, who otherwise seemed intent on contradicting Albom for the entirety of the evening, concurred: An insidious writerly "paralysis" does indeed follow success. "You walk around Barnes & Noble hoping to be discovered," Jong said. "Then when it happens it's terrifying" Public acclaim, she insisted, offers constant distractions. It takes two years, she complained, to "unlist your phone number ... so that you can go back to your work." She, too, experienced a kind of shell-shock when she became a celebrity and was also unable to write again for some time. Worse yet, she felt "guilty for my success."

A sudden infusion of money is another stressor that successful writers must confront. Mary Karr, who also professed to be shocked by her book's success, but in a good way ("after writing poetry for 20 years, the notion that anyone would read my books was comical," she said), was unfazed by this aspect. She noted sassily that, unlike Albom, "I did it strictly for the money. I was a single mom. I wanted every penny I could get." Her biggest problem was explaining to her mother that she really did get to keep the money and "wouldn't have to give it all back."

In response, Jong -- who later expounded on her ongoing anguish over having sold in perpetuity the worldwide rights to "Fear of Flying" for just $50,000 -- related a lengthy anecdote involving a dinner she attended at the home of "The Godfather" author Mario Puzo shortly after the publication of "Fear of Flying." Puzo, she said, questioned her wisdom in bothering with a second novel because "they shit all over second novels. I can get you big bucks for a screenplay." Jong replied, with a certain relentless mathematical logic, "If I don't write my second novel, I can't write my third novel, and if I don't write my third novel, I can't write my fourth novel, and if I don't write my fourth novel, I can't write my fifth novel." Several audience members, who probably realized they couldn't produce the titles of any of Jong's post-"Fear of Flying" novels if they were asked to do so on "Weakest Link," squirmed politely. Jong continued. "When I'm 80," she said she told Puzo, "I want there to be a shelf of books over my bed," all written by herself. "You're stupider than I thought," Puzo replied.

But of all the banes of the successful author's existence perhaps none so stirred the panelists' passions as critics. Personal attacks leveled on her by critics, Jong said, added to the terror she felt after the publication of "Fear of Flying," but they also toughened her up. "I was called a 'mammoth pudenda' by the New Statesman," she declared, "and when you've been called a 'mammoth pudenda' nothing after that has any force." McCourt, too, showed an atypical venom, saying that in particular there was one reviewer of "Angela's Ashes" he'd very much like to meet in a dark alley. Karr seemed almost embarrassed to report that "I was treated generously" by critics -- but maybe, she added, that's because "people beat up on fiction writers more. They treated me gingerly because they feel like I showed them a confidence."

A less baleful, but still trying burden successful authors suddenly had to deal with, the panelists agreed, was fans who approach them with larger-than-life expectations. Not all the panelists considered this a negative side effect of fame. Jong explained that at first she wasn't even recognized in public because no one would have her on their television shows, but once that situation was corrected she began to be spotted and had "uniformly wonderful" experiences. "The negative stuff," she said, all came in the mail, including threatening anti-Semitic letters. "That was the scariest thing," she said, because "when you write a book that even people who don't read hear about, you're a target."

Albom noted that his experience was "the polar opposite" -- strangers began treating him as if he were a "healer," with something magical to offer them. "People went from asking me, 'Are the Yankees gonna win?' to stopping me in airports to say 'Morrie,' -- they think I'm Morrie -- 'I need to tell you about my mother who's dying of cancer.'" After a success like that, you become a spokesperson, Albom explained.

"I disagree," Jong (by now, predictably) countered. Those who want to make an author a spokesperson are the minority, she said, and besides, the only proper way to write is to pretend no one's going to read it. "Why should a writer have to be a healer?" she asked, beginning to wander dangerously off-topic. "Isn't it enough to write?"

McBride said he was more tickled than troubled by his fans, especially since they offered nurturance rather than demanding it from him. He explained that to publicize his book, which tells the story of how his Jewish mother raised a family of African-American children, he sent mailings to Jewish reading groups, and he seemed amused that he had been embraced by "all these Jewish women inviting me to their house, feeding me matzos and shit."

McBride, who had sat silently though the panel's early exchanges, seemed puzzled by the high drama that accompanied his fellow authors' success. "First of all, I don't read the New York Times Book Review, I don't read critics at all. That's how I make it through the day. I just do my work," he said. "I don't consider myself literary ... 'The Color of Water' brought me a lot of success, and I'm delighted with that. I've become the Deepak Chopra of black Jews. The book was an ode to humanity, and I wrote it from a pure place." McBride dismissed the talk of "terror" and "paralysis," pulling out one of the urban black man's rhetorical trump cards: "I'm paralyzed with fear when I try to hail a cab."

The other panelists offered their perspective on surviving a sudden debut into the upper ranks of literary culture. "Do you mingle with the literary world?" Frank McCourt asked, to which the voluble Jong replied that she worked with the Author's Guild but that "the literary world terrifies me." Does she read the New York Review of Books? "Absolutely not!"

Surely the stickiest question of the evening, though, was what does one do next after writing a successful book. Albom sounded a thoughtful note. "You always think you'll build on whatever you do, but what happens when there's nowhere else to go?" He said he'd been coming to the unsettling realization that "this is as high as it gets for me," and had finally accepted that whatever he wrote next would not sell 5 million copies, as "Tuesdays at Morrie's" has. McBride said that his next book, a novel, will explore the stories of black soldiers during World War II. "I hope that one's a big success too, but if it's not, that's OK."

Could the dilemma of the follow-up be laid at the feet of those malevolent reviewers, the ones who love nothing more than to tear you down once you've shot your way to the top? McBride (despite never reading critics) observed that McCourt's second book, "Tis," met a less positive critical response than did "Angela's Ashes," a book McBride professed to greatly enjoy. He suggested that when "someone who kisses the black stone goes back to kiss it again, everyone gets pissed off."

During the question-and-answer period, an audience member asked, "Why are you all so sour about your success?" At this, the panelists seemed genuinely surprised -- and perhaps just a touch defensive.