Leave my rock 'n' roll out of your Ren Faire! 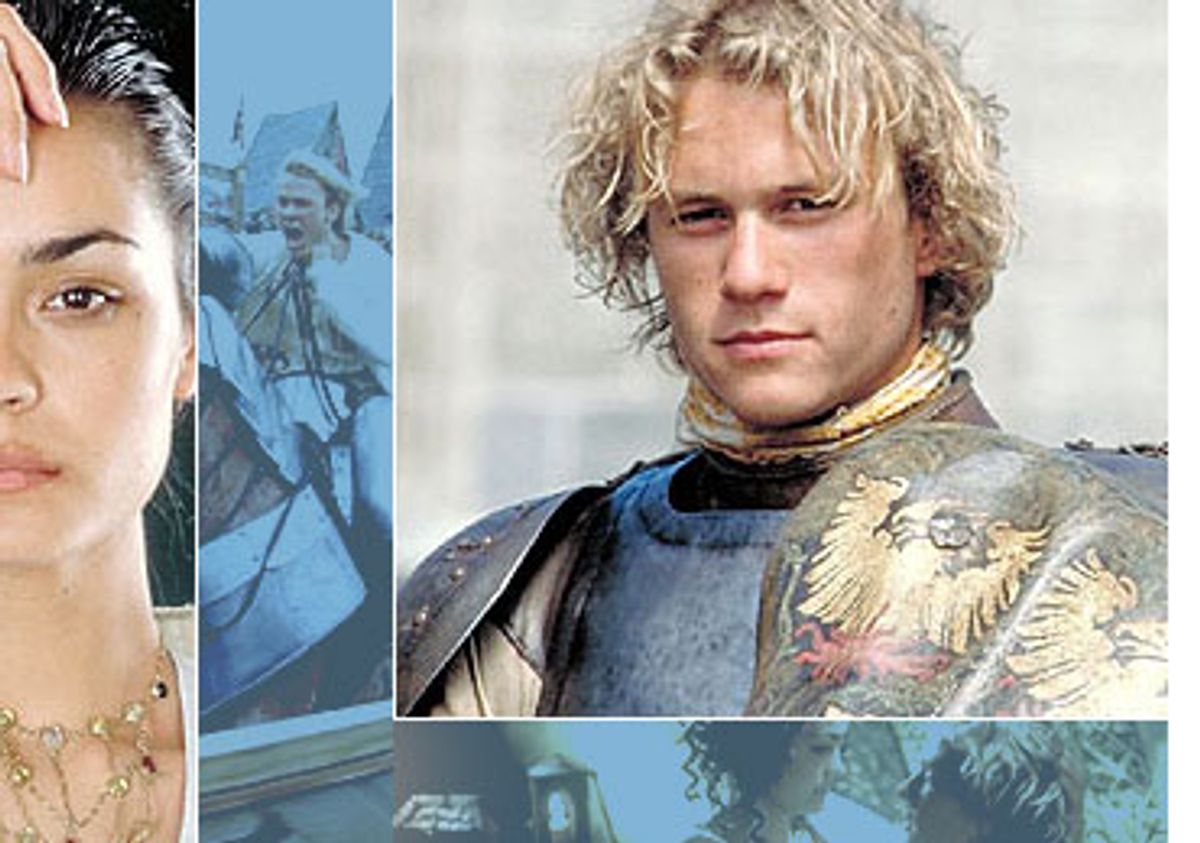 Rock 'n' roll movies as square as writer-director Brian Helgeland's "A Knight's Tale" don't come along every day. The music, most of it classic arena rock from the '70s and '80s, like Thin Lizzy's "The Boys Are Back in Town" and Queen's "We Are the Champions," feels Superglued onto the movie's action as an afterthought. The whole thing reeks of some marketing guy's decision that a movie about jousting and medieval dudes walking around in leather jerkins would never work all by itself: "Hey, let's repackage it with some groovy tunes and sell it to the kids!"

Don't be had, boys and girls. There's nothing in "A Knight's Tale" that revs you up the way a rock 'n' roll movie sequence should -- that does the kind of thing that, say, Iain Softley did so wonderfully in "Backbeat," or haphazard genius Baz Luhrman carried off in his messy, mesmerizing "William Shakespeare's Romeo and Juliet." Nothing in "A Knight's Tale" is even as good as the choppy action sequences in "Charlie's Angels." If movie directors who cut their teeth on rock videos (like McG's "Charlie's Angels") know how to do one thing, it's edit a sequence so that it moves with the music. In "A Knight's Tale," the music is puzzling and ill-fitting, throwing you out of scene after scene; I couldn't help groaning every time I heard the soundtrack heating up.

Virtually nothing happens in the nearly two-and-a-half-hour sprawl. A young commoner named Will (an uncharacteristically wooden Heath Ledger) poses as a nobleman so he'll be eligible for jousting tournaments. In them, he meets such less-than-sizzling opponents as Count Adhemar (the droopy-eyed Rufus Sewell, who looks barely interested enough to drag himself out of bed much less wield a lance).

Will falls for lovely Lady Jocelyn (Shannyn Sossamon), who's inexplicably dressed like a cross between Audrey Hepburn and Zandra Rhodes, at one point sporting multicolored tufts of synthetic hair that poke out of her head like paintbrushes -- she's the movie's idea of the quintessential medieval downtown chick. Count Adhemar digs her as much as Will does and the two men clash.

Meanwhile, there are lots of jousting sequences, each one indistinguishable from the last. The lance always breaks in the same way; the knight always falls from his horse in the same rehearsed tumble. The fight scenes could have been lifted straight out of cheesy, cheapo Saturday afternoon action flicks in which the same footage is used over and over again because little kids won't know any better anyway.

Helgeland (whose previous credits include the screenplay for "L.A. Confidential" and directing "Payback") has loaded "A Knight's Tale" with ostensibly amusing anachronisms, from Will's assertion that Jocelyn is a real "fox," to the Nike symbol that a metalsmith embosses on Will's new armor. Helgeland also crisscrosses occasional modernism with pseudo-historical authenticity, like the official-looking titles marching across the bottom of the screen ("Southern Front, Battle of Poitiers") that tell us where certain scenes take place. There's even a character named Geoffrey Chaucer, played by the occasionally witty Paul Bettany; he makes his first appearance in the movie as a naked gambler, since being a plain old writer is just boring. And almost everyone in "A Knight's Tale," from the rabble to the fighting knights, looks really, really dirty, so you know it must be authentic.

There's nothing wrong with sprinkling anachronisms around in a period story, but here it just comes off as a desperate bid for hipness. The dialogue does nothing to poke the plodding story along; mostly, it's howlingly stiff. During a lovers' quarrel in which Will suggests that Jocelyn is inferior because she's a woman, she retorts, "Better a silly girl with a flower than a silly boy with a horse and stick!"

For those in search of enlightenment, there's plenty of ishkabibble about honor, chivalry and changing one's destiny, and if you've got the hots for pathos, there's even an old, blind pappy. But for those about to rock, "A Knight's Tale" is pretty dismal pickings. In a banquet scene, an elaborate medieval ball morphs into a disco dance where the guests boogie awkwardly to David Bowie's "Golden Years." Later, a jousting montage ambles along to the tune of Bachman-Turner Overdrive's "Takin' Care of Business." The sequences set against source music feel lethargic and misshapen and confused, as if they just didn't know what hit them. "A Knight's Tale" works neither as an exuberant rock 'n' roll picture nor as a heroic fable. It will rock you -- straight to sleep.