More questions arise over how accurate President Bush's solicitor general-designate has been about his role in an anti-Clinton investigation. 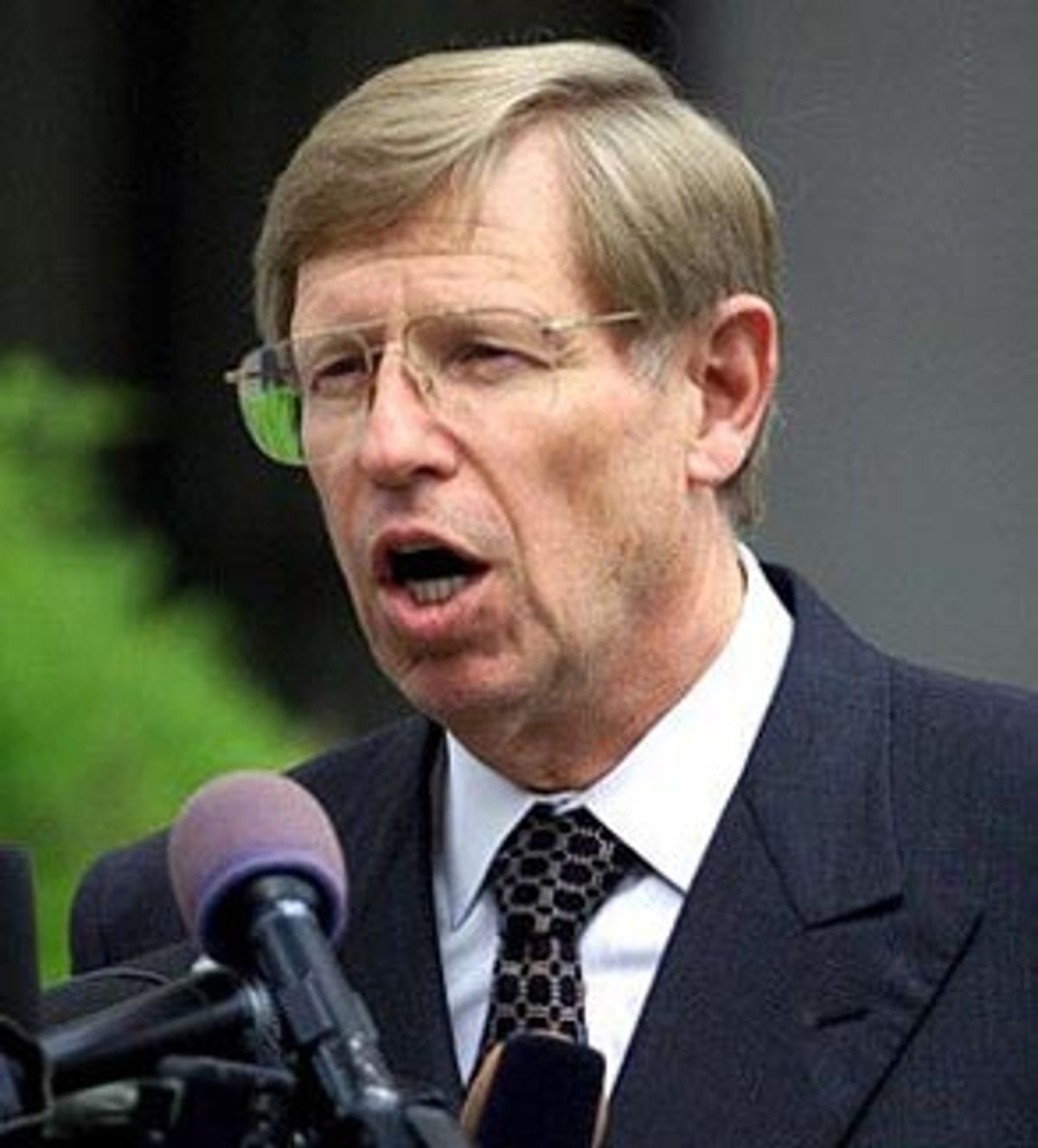 With serious questions raised about the forthrightness of President George W. Bush's solicitor general-nominee, Ted Olson, the Senate Judiciary Committee Thursday delayed a vote on his confirmation for at least a week.

The Judiciary Committee chairman, Sen. Orrin Hatch, R-Utah, refused to publicly go into the reasons for the delay. Sources on the Judiciary Committee, however, confirm that the delay is a direct result of concerns that the ranking Democrat on the committee, Sen. Patrick Leahy, D-Vt., has about Olson and the credibility of some of the answers Olson has given to the committee in official questioning.

Specifically, Leahy has been publicly wondering just how honest Olson has been about his involvement in the "Arkansas Project," the privately funded investigations into the life of Bill Clinton, funded with around $2 million by conservative billionaire Richard Mellon Scaife and channeled through two nonprofit organizations run by the American Spectator magazine.

The incident comes at a hairy time for the Judiciary Committee, with serious tensions between Hatch and Leahy, and Democrats' insisting that they have as much of a say in Bush's judicial selections as Republicans had in Clinton appointments.

Olson represented Bush in various courtrooms on behalf of the president's myriad federal cases to stop hand recounts in Florida. Before that, he was a controversial figure with a controversial past. Leahy had asked Olson about his involvement in the Arkansas Project during Olson's April 5 confirmation hearings, as well as in subsequent follow-up written testimony, and apparently he is still not satisfied with the answers he's received.

In a May 4 letter to Olson obtained by Salon, Leahy says that he "remain(s) troubled by your responses and lack of responsiveness." He repeats several questions from previous inquiries, wanting to know "the nature of the various components" of his work for the American Spectator or the Arkansas Project. "Please describe in detail when and how you first became aware of the Arkansas Project."

"The credibility of the person appointed to be the Solicitor General is of paramount importance," Leahy writes. "When arguing in front of the Supreme Court on behalf of the United States Government, the Solicitor General is expected to come forward with both the strengths and the weaknesses of the case, to inform the Court of things it might not otherwise know, and to be honest in all his or her dealings with the Court. I expect that same responsiveness and cooperation from nominees before this Committee."

In follow-up questions to Olson first reported in Salon a week ago, Olson backtracked a bit on this, changing the date he became aware of the Arkansas Project to 1997. He also used evasive language when asked about events prior to 1997 -- reported in the past by Salon -- including legal fees paid by the foundation to Olson's law firm in 1994, Spectator stories negative to Clinton co-authored by Olson under a pseudonym and Olson's representation of David Hale, who testified against Clinton in the Whitewater matter.

The delay of Thursday's hearing seemed directly linked to a story published in Thursday's Washington Post, which quotes former American Spectator writer David Brock, who spoke by phone both to the Post and to a committee staffer. Brock said that Olson was directly involved in the Arkansas Project, and not just as a member of the board of directors after 1997, as Olson had claimed.

In a May 9 letter to Leahy, a clearly irritated Olson continues to argue that his "only involvement in what has been characterized as the 'Arkansas Project' was in connection with my service to the Foundation as a lawyer and member of its Board of Directors."

"At some point during the year 1997, I cannot recall precisely when, I learned of allegations that the [American Spectator Educational] Foundation had received grants of funds to finance investigative journalism efforts by the Foundation's magazine relative to activities of President and Mrs. Clinton" during their time in Arkansas.

Brock seemed to contradict this version of Olson's involvement, according to the Post. Olson and his wife, Barbara, regularly participated in "brainstorming" meetings at the home of R. Emmett Tyrrell Jr., the president and chairman of the American Spectator, Brock said. Moreover, Brock said that Olson once argued in favor of publishing a story asking questions about the suicide of former White House counsel Vince Foster, because, as Brock said, "while he didn't place any stock in the piece, it was worth publishing because the role of the Spectator was to write Clinton scandal stories in hopes of 'shaking scandals loose.'"

In the same May 9 letter to Leahy, Olson responds to a question about how he first got in contact with Hale by writing, "I cannot recall when I was first contacted about the possibility of representing Mr. Hale  I believe that I was contacted by a person or persons whose identities I cannot presently recall sometime before then regarding whether I might be willing to represent Mr. Hale "

The issue of who, exactly, hooked Olson up with Hale has been a subject of media inquiries for years, investigated in 1998 for Salon by Murray Waas.

At a White House press briefing Thursday, spokesman Ari Fleischer was asked about "a delay in the consideration of Olson over questions about what he's done in the past with regard to magazine articles regarding President Clinton."

"Mr. Olson has assured the committee that he was not involved in that matter in any way," Fleischer said -- a claim not even Olson has made.