Time for Judaism's favorite point guard to brush up on his trivia. Feel free to play along -- even you stubborn Jews! 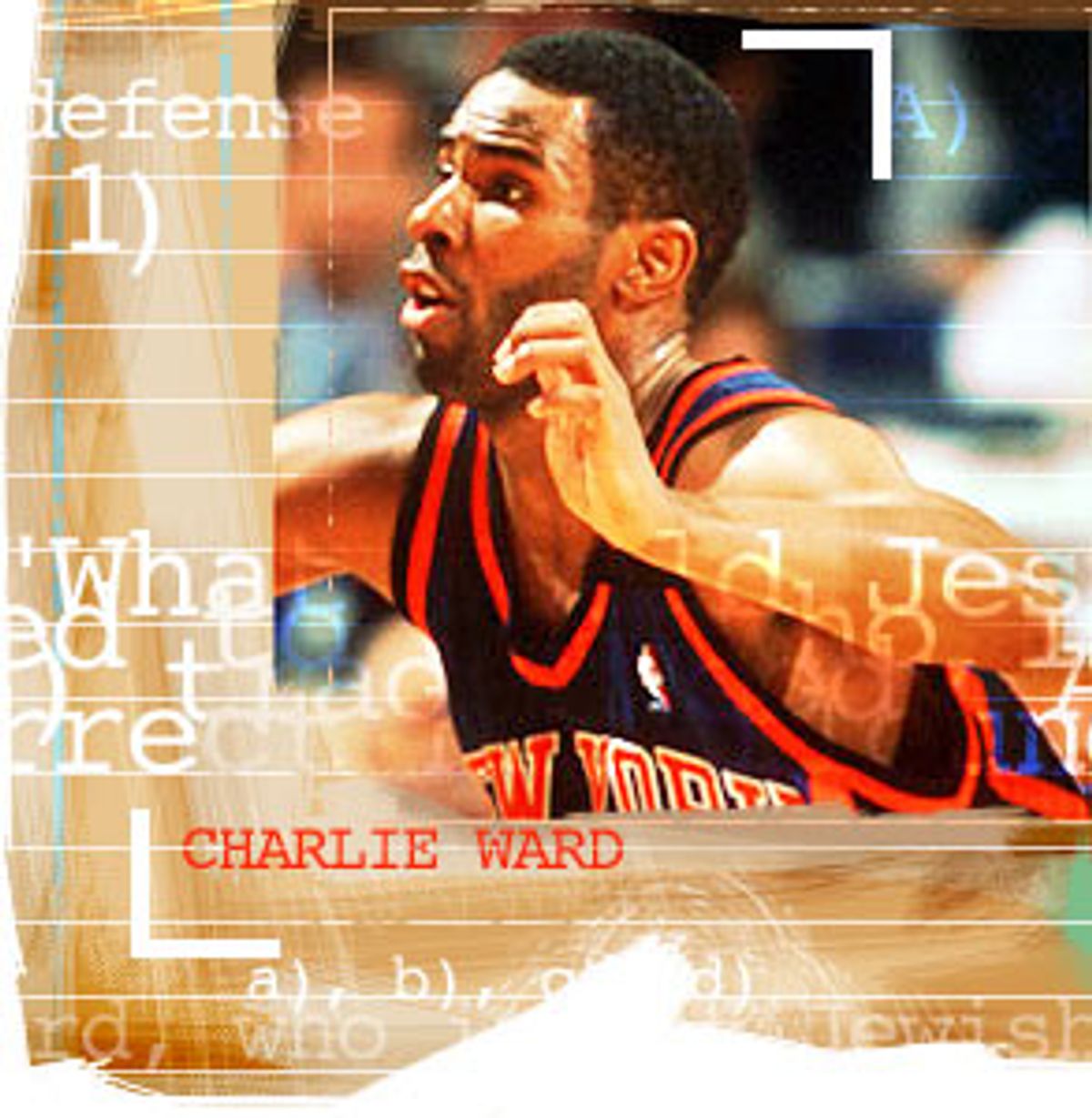 New York Knicks point guard Charlie Ward caused a firestorm a few weeks ago when some comments he made about Jews appeared in a New York Times Magazine article. Ward told the piece's author, who is Jewish, that, among other things, "Jews are stubborn," "they had [Christ's] blood on their hands" and "there are Christians getting persecuted by Jews every day." This occurred in a Bible study class before a game against the Milwaukee Bucks (a team owned by Wisconsin Sen. Herb Kohl and whose general manager is Ernie Grunfeld -- both Kohl and Grunfeld are Jewish).

Ward's teammate, Allan Houston, chimed in with a bit of Scripture he called up on his Palm (Pontius?) Pilot, in which he noted how Jews "spit in Jesus' face and hit him with their fists." (Come to think of it, that sounds more like the typical behavior of Charles Barkley.)

Since the article came out, the Knicks were eliminated by the Toronto Raptors, sending the Knicks to an ignominious first-round playoff loss for the first time in 10 years.

Ward may not have blood on his hands, but he certainly has a lot of extra time on them now that his team has been sent on an early summer vacation. What better occasion than now for the young man to test those other skillz?

1) In the fourth quarter of the Knicks' deciding Game 5 home loss to the Toronto Raptors -- a team that had never before, ever, in its history won a playoff series -- who was unable to put the ball in the hoop? A) The Lord, our God, blessed be he, B) St. John the Baptist, C) Jesus or D) Charlie Ward.

2) The Raptors were virtually able to score at will, thanks to the porous defense of whom? A) The Philistines, B) the Pharisees, C) the Worldwide Jewish Conspiracy or D) the Knicks.

3) Charlie Ward, who is not Jewish, has been a member of zero NBA championship teams. Red Auerbach has, as coach of the Boston Celtics, won more NBA championships -- nine (eight of them in a row) -- than any other person in the league's history. He is: A) Zoroastrian, B) Zen Buddhist, C) Branch Davidian or D) Jewish.

4) Complete the blanks in the following sentence with the biblical chapters that fit best. If the Knicks had put up better _____ they wouldn't have found themselves with such an early _____ from the playoffs: A) Genesis, John; B) Deuteronomy, Romans; C) Corinthians, Leviticus; or D) Numbers, Exodus.

5) If he were the general manager of the Knicks, "What Would Jesus Do"? A) Trade Charlie Ward for a point guard who turns the other cheek (as opposed to one who instigates physical confrontations, such as the one that got him suspended in the 1997 playoffs); B) trade Woody Allen and Spike Lee for a player to be named much, much later; C) try to resurrect his floundering franchise; or D) all of the above.

Bonus question: The Knicks have won exactly two NBA championships, the last one in 1973. Both titles came under the direction of one man, their coach, who was Jewish. Who was he? A) Isaiah Thomas, B) Moses Malone, C) Dr. Julius Erving or D) Red Holtzman.

The answer to all questions is "D."