In Colson Whitehead's dazzling follow-up to "The Intuitionist," a junketeering journalist pursues an American legend in an epic tale of man, machine and free drinks. 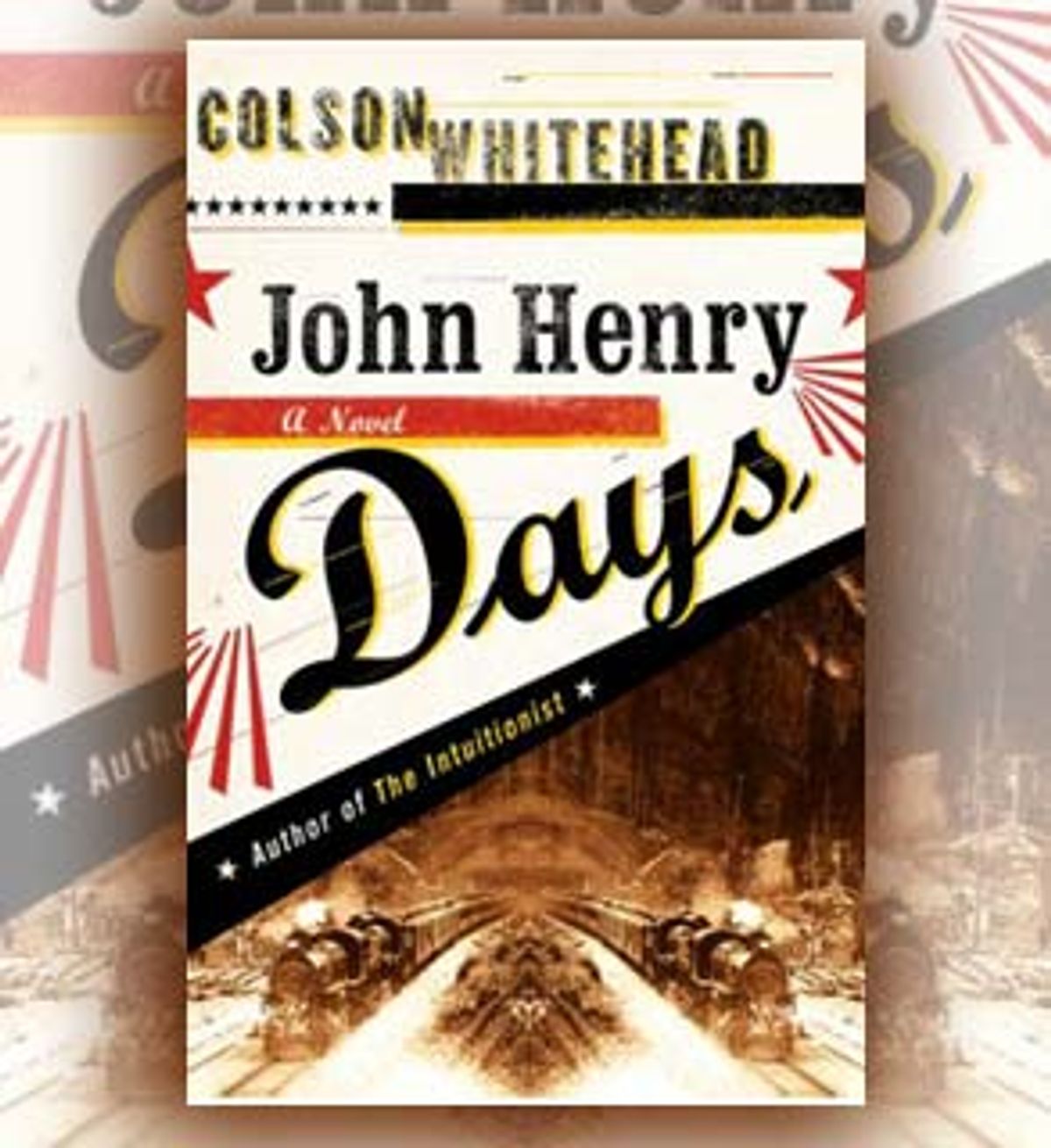 Colson Whitehead's "John Henry Days," the follow-up to his much -- and quite rightly -- acclaimed 1999 debut, "The Intuitionist," is, by every standard, a big book. For one, there's Whitehead's hulking talent, the potential of which buzzed through "The Intuitionist" with the voltage of a city power line; for another, there's the novel's outsize subject matter, which is more or less America, the epic idea of which Whitehead chases with the dogged ambition of a Lawrence or DeLillo. And, on the simplest level, there's the novel's overstuffed, 389-page girth. Writers tend to shrink back with their sophomore efforts, having thrown kitchen sink and all into their long-gestated debuts, but with "John Henry Days" Whitehead took the opposite tack -- there's enough debris for seven or eight lesser novels whirling 'round Whitehead's funnel cloud.

At the novel's vortex, with hammer in hand, stands John Henry, the semi-mythical 19th-century black railway worker whose triumphant race against a steam-powered drill cost him his life but transformed him into American folklore's lushest metaphor -- that of mankind's noble if futile struggle against the soullessness of machinery. Orbiting John Henry's story -- thinly but marvelously told -- are a panoply of others, the most essential of which concerns J. Sutter, a black freelance journalist too jaded "to pretend that there is anything but publicity," who's been reduced to covering, for a cheesy travel Web site, the cheesier unveiling of a commemorative postage stamp in a small West Virginia town.

Like John Henry, who the postage stamp honors, J. is engaged in a race of his own: He's trying to smash a dubious record for attending press junkets, having made it to at least one per day for the last three months, a jag he is "too unwilling or too scared to break." Not unlike blasting railroad tracks through mountains, this line of work entails its own physical hazards -- one of J.'s fellow junketeers, for instance, lost an eye to a finger, Stooge-style, while leaping for a free cocktail, and J. himself comes perilously close to a very real if also metaphorical end when he chokes on a "stern and vengeful" plug of gratis prime rib.

These contrapuntal narratives, with their chafing together of the Industrial and Information Ages, are almost always pitch-perfect. Whitehead, a former television critic for the Village Voice, brings a serrated wit to his depiction of the junketeering life; his wickedly precise portrayal of a Manhattan publishing party -- with its clinking glasses and banal, disjointed chatter -- shudders with a grandly satiric frisson. But Whitehead, pendulating between John Henry's feats and J.'s, never once settles for an easy, false nostalgia; hero and hack walk side by side through their paralleled worlds, equals in their fight against their respective mountains. As another character puts it: "We make our own machines and devise our own contests in which to engage them."

Less perfect -- and what fainter criticism there is I do not know -- are the stories festooning the novel's periphery: stories of briefly glimpsed bluesmen, folklorists, songsters, stamp collectors, hoteliers, even Paul Robeson; stories of lives touched, however softly, by John Henry's legacy. Darting in and out of the novel, these flyaway tales alternately rev and sputter the narrative engine. The oblique light they shed on Whitehead's central metaphor isn't always revelatory, but then the metaphor itself isn't exactly revelatory, either. As a young J., upon first hearing about John Henry in grade school, longs to ask his teacher: "Mrs. Goodwin, if he beat the steam engine, why did he have to die? Did he win or lose?" In Whitehead's extraordinary hands, a nation is contained in that question.