An engrossing documentary follows two friends as they soar and crash with the dot-com wave. 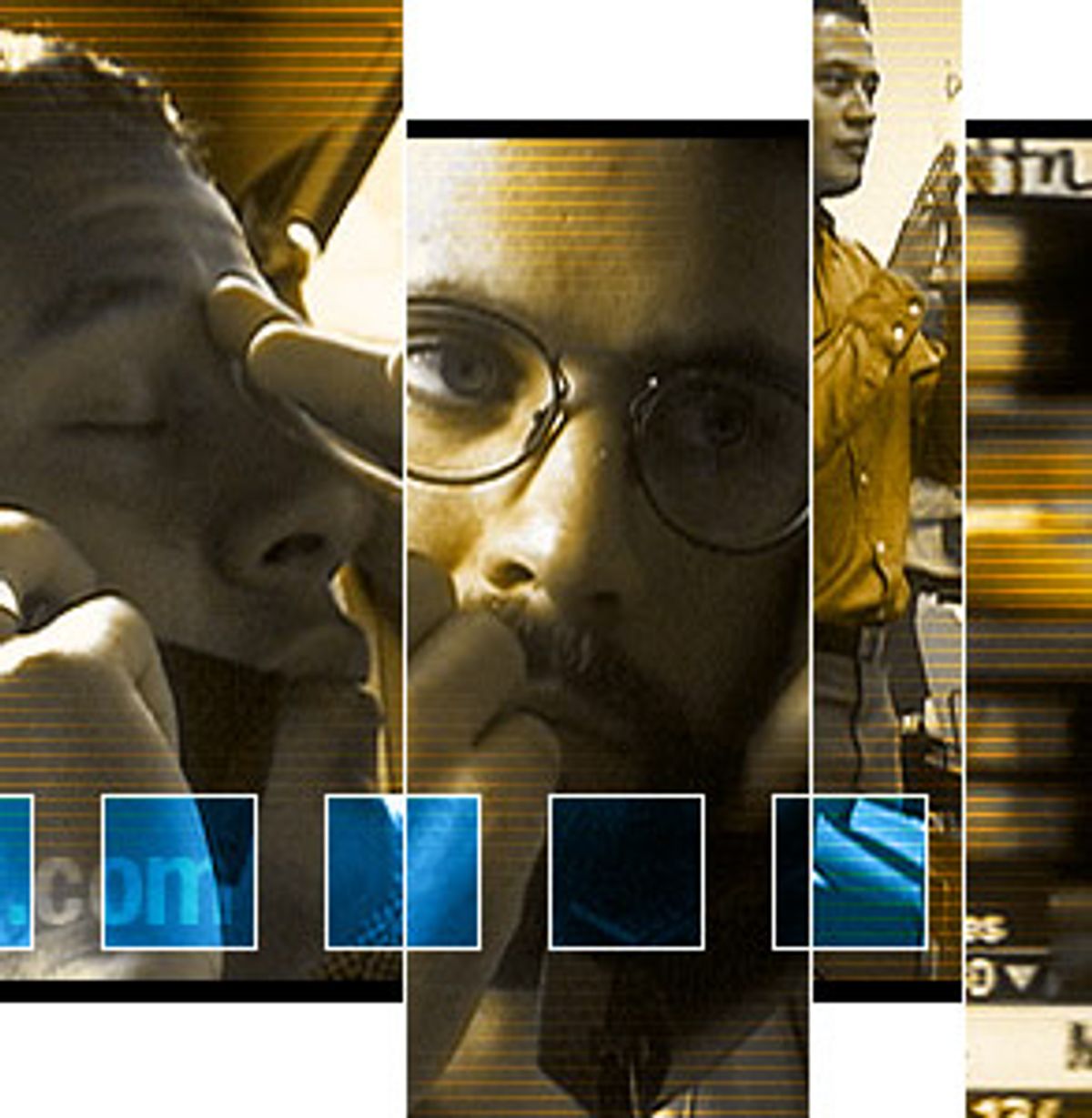 With remarkable efficiency, the feature documentary "Startup.com" tracks the rise and fall of an Internet company named GovWorks. In doing so, the movie alluringly evokes the rush of late '90s capitalism, a heady period just two or three years ago, when a business plan and a confident handshake could secure millions of dollars in venture capital; when vision was more important than experience; when it seemed anyone could get filthy rich on an idea.

But the movie is about much more than that. Filmmakers Chris Hegedus and Jehane Noujaim wisely center their film on a human drama. (The film was produced by documentary filmmaker D.A. Pennebaker, Hegedus' husband. The couple directed the Academy Award-winning documentary "The War Room," about Bill Clinton's 1992 campaign for the presidency. Noujaim was a producer at MTV; this is her first film.) Amid all the biz-speak and buzzwords, the goatees and dry-erase flowcharts, is a story about two best friends: Kaleil Isaza Tuzman and Tom Herman.

Those two characters, one confident and bullheaded, the other capable and sensitive, break the film open: With them at the center of this Internet vortex, the movie becomes a story about risk, about hubris, about youth, about the old way and the new way, and about what happens when you trade everything for something that really isn't there.

And yet the movie doesn't mock, it takes its subject seriously and Noujaim and Hegedus haven't picked something easy to ridicule, a "Pushpins.com." They focus on a decidedly unsexy Internet venture, a company tied to government rather than a flashy portal or kinky content provider. The film implicitly reminds that some Internet companies were real businesses -- not some sort of artistic endeavor. Business culture, no matter how quasi-revolutionary, is not an art. A company may have sweat, but that doesn't mean that it has soul.

In late 1998, Kaleil and Tom come up with an idea of putting state and local government online with a couple of friends. They're not exactly clear about what they want to do, but they're ambitious. Kaleil has a good, secure job with Goldman, Sachs, but he's wowed by the promise of Internet cash. About six months later, he and Tom have named their company GovWorks and decided that it will let citizens pay parking tickets online, as well as file taxes and find and contact their local representatives 24 hours a day. Together, they raise $700,000 in angel money, the earliest form of financing.

The structure of the film is simple and linear. We see a month in a subtitle at the bottom of the screen with the number of employees at the company. It's 30 in August, 70 in October and up to a bursting 233 six months later. They raise a total of $60 million in two more rounds of financing. In one scene, Kaleil cleans off his desk at Goldman, Sachs. Less than an hour later in movie time, a few months ticked off the bottom of the screen, we see him in a roundtable discussion on representative democracy and the Internet with President Clinton on C-SPAN.

Part of what makes the film so fascinating is the way it both reinforces and contradicts everything we think we know about Internet start-ups. The co-founders have cellphones glued to their heads; they multitask 24-7. They work out of cardboard boxes in unfinished offices; they chant together in a morning meeting and run away on company retreats. They talk about "lousy valuations" and use a funny language with words like "heuristic" and "holistic." The media adores them.

At the same time, the business consumes their lives. They have to buy out a friend and co-founder of the company. They destroy their personal relationships. They fend off tremendous pressure from investors, from their board, from their friends. And in the end, they turn on each other and drag lawyers into the middle of a friendship. They're kids -- both in their late 20s -- trying to simultaneously harness the money and power of traditional business and subvert the old way of doing things. (To cite one example, the cast is one of the most pan-ethnic that I've ever seen in any film, documentary or feature.) And they all expect to get rich.

We don't see much of the application they're working on, or really how it gets made. And that's a fault of the film, but one that works to its advantage. You can read it as a minor misstep or a winking joke on the company and the Internet boom itself. We know all this money is flying around, and all this work is being done, but we only have a vague idea of what it's all about.

Shot on mini DV, usually with one or two cameras, the images in "Startup.com" are often dark or grainy. But the camera seems to be everywhere. In one shot, a shirtless Kaleil talks on the phone from the edge of his bed with his girlfriend's arms wrapped around him. It's an incredibly intimate moment, one where you can see him erasing any line between the business and his personal life. Or in another scene, Kaleil calls his mother at 1 in the morning just to chat. "I'm in the zone, Mom," he says unconvincingly.

With scenes like that, the film manages to do what the best documentaries do: It takes you into someone else's life. (Noujaim lived with Kaleil and began filming him around their apartment when he started the company; Hegedus joined later.) The people on the other side of the camera forget that they're being watched, or they become bored with the cameras, and they reveal themselves. It's particularly obvious in "Startup.com." At the start of the film, Kaleil almost mugs for the camera. He's seen movies and read business stories and he knows he's the star. But as time goes on, you can feel Hegedus and Noujaim slipping into the background, unnoticed. Later, we watch Kaleil duck into an empty room and say a prayer.

Hegedus and Noujaim know their subjects are fascinating, particularly Kaleil, but it's not so easy to figure out what we're supposed to feel about them. We're initially charmed by Kaleil, like everyone else, but we see him turning into sort of a businessman drone. We watch him destroy a relationship with one girlfriend and see another go sour before it really starts. We admire his leadership, but then we see him screwing over his friends.

Kaleil knows he and his company are in trouble. The competitor's site is better, and GovWorks has flat revenues, bloated infrastructure and no clear path to cash. He's being crushed from all sides. Tom says that he'd rather see the company go down than risk personal relationships. Kaleil says that the investors and the board "don't care if we grow and learn."

We empathize with Kaleil but, because we've witnessed him make so many choices, we don't afford him any cheap sympathy. We don't want to see him fail; it's painful to watch. But we realize that if these guys are losing something they created, they're losing a business. No one is crushing their sculptures or burning their paintings. And we remember just who these people are: smart, talented, ambitious young people who had the guts to start something grand. They'll be OK, and they know it, too.

"How bad can it be?" asks Tom. "We'll get other jobs, start other businesses."