Despite his evasive disavowals, Salon investigations showed the right-wing consigliere was deeply involved in a sordid plot to bring down President Clinton. 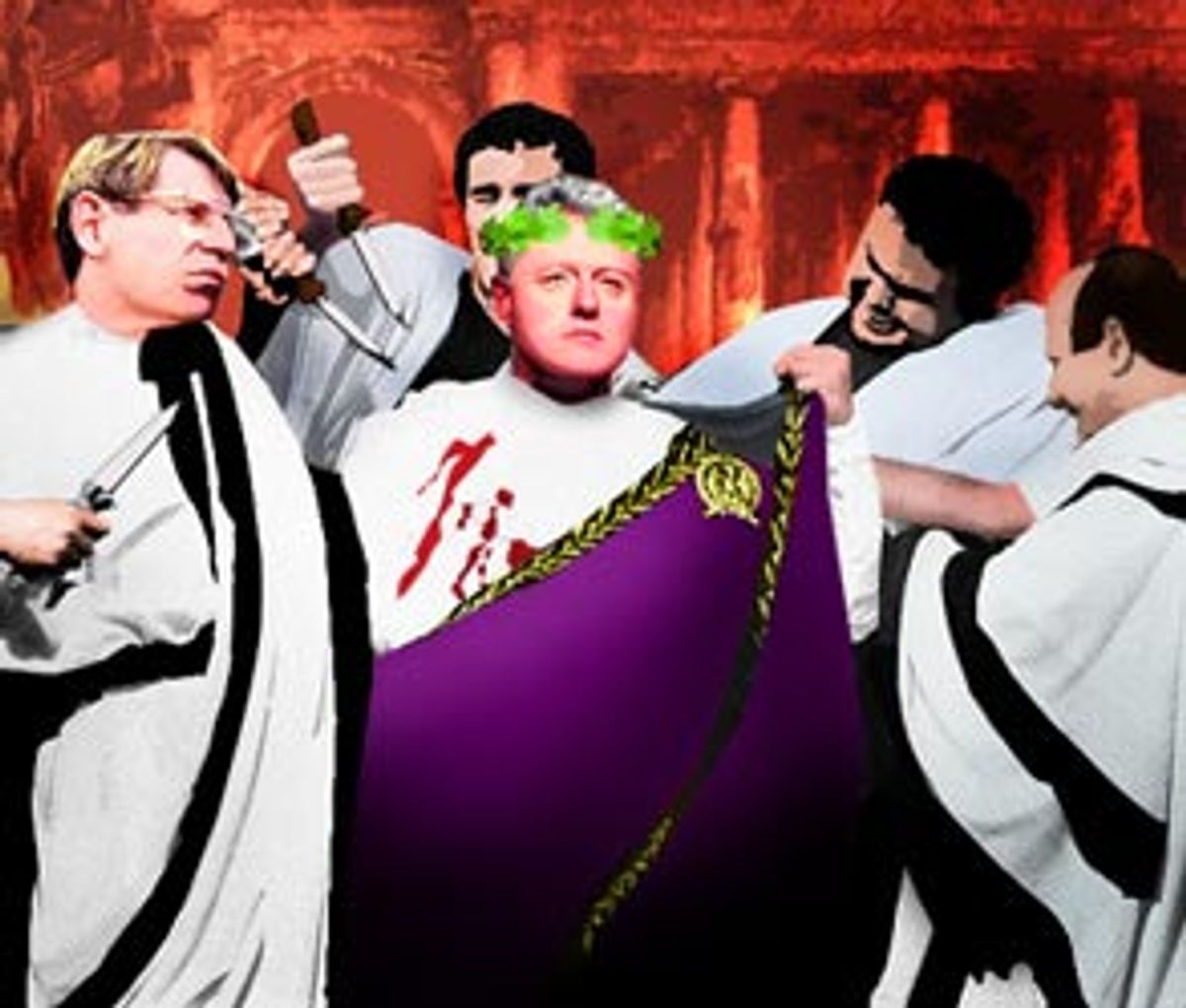 The Senate Judiciary Committee on Thursday delayed its vote in the confirmation of Ted Olson as President Bush's solicitor general. The move came after Sen. Patrick Leahy, D-Vt., publicly questioned inconsistencies in the answers Olson has provided about his role in the Arkansas Project, a $2.4 million, five-year effort to dig up dirt on President Clinton.

Fearing that his confirmation could be derailed by the allegations, Olson has attempted to downplay his role in the Arkansas Project, but with each new response, he seems to backpedal from his original account even further.

Olson's evasiveness drew a rebuke from the ranking Democrat on the committee. "The credibility of the person appointed to be the Solicitor General is of paramount importance," Leahy warned in a May 4 letter that followed Olson's written responses to additional questions forwarded by the committee following his April 5 confirmation hearing.

In 1998, Salon ran a number of stories investigating Olson's relationship with the right-wing magazine American Spectator, under whose auspices the Arkansas Project was run, and the circumstances under which he came to provide pro-bono legal representation for key Whitewater witness David Hale. Salon's reporting refutes many of the statements made by Olson at his confirmation hearing and in his subsequent written responses and raises serious questions about his fitness for the office of solicitor general.

Salon compared the testimony provided by Olson at his confirmation hearing and his subsequent written answers to follow-up questions by the committee with the findings of exhaustive investigative reporting conducted by Murray Waas, Joe Conason and Jonathan Broder for Salon during the investigation of President Clinton. Here's what we found:

On Olson's role in the Arkansas Project:

Leahy: Were you involved in the so-called Arkansas Project at any time?

Olson: Only as a member of the board of directors of the American Spectator I became aware of that. It has been alleged that I was somehow involved in that so-called project. I was not involved in the project in its origin or its management.

The facts: An investigation by Murray Waas revealed that Olson "provided legal advice to both the American Spectator and the Arkansas Project," in addition to serving on the boards of four conservative political groups funded by Richard Mellon Scaife, the reclusive Pittsburgh billionaire who has funded and has ties to many prominent right-wing groups, including the Federalist Society, which has served as a veritable breeding ground for Bush's judiciary appointments. Both Olson and his then-colleague John Mintz at the law firm of Gibson, Dunn & Crutcher advised the Arkansas Project from its inception in 1993. "Olson is somebody who Scaife would trust to see that nothing went wrong and that his money would not be wasted," a source told Waas at the time.

On Olson's disputed presence at meetings of the Arkansas Project:

Leahy: There were no meetings of the Arkansas Project in your office or ...

Olson: No, there were none.

The facts: The first meeting of the Arkansas Project took place in 1994 at Olson's Washington law office and was attended by Olson, Stephen Boynton, Dave Henderson and others from the American Spectator and other Scaife-funded organizations, according to reporting by Jonathan Broder and Joe Conason. In a subsequent article about the extravagant, "tax-exempt" lifestyle of American Spectator editor R. Emmett Tyrrell, a third of whose $598,000 McLean, Va., home was owned by the nonprofit foundation that publishes the magazine, Salon obtained documents outlining "frequent visitors to Bob's home/office for business purposes" and "dinners and meetings at RET's home" in 1996 and 1997. Theodore Olson was among those "frequent visitors" -- a list of whom reads like a who's who of anti-Clinton journalists.

As reported by Salon's Jake Tapper, Olson amended his response in a letter he sent to Leahy last week: "I do recall meetings, which I now realize must have been in the summer of 1997 in my office regarding allegations regarding what became known as the 'Arkansas Project.'" Olson elaborates in the letter that he was the American Spectator's attorney during the same period of time that the Arkansas Project took place. Olson also confirms that he did, in fact, convene a meeting about the Arkansas Project in his office prior to 1998. Of the 1994 meeting, he writes, "I do not recall the meeting described." Olson adds, "I certainly was not involved in any such meeting at which a topic was using Scaife funds and the American Spectator to 'mount a series of probes into the Clintons and their alleged crimes in Arkansas.'"

Leahy: Mr. Olson, you represented David Hale -- there's no surprise here. These are some questions I asked you when we met. He was the sole witness to make specific allegations against President Clinton in the investigation of the Whitewater matter. How did you come about representing him and were you paid for that?

Olson: Two of his then-lawyers contacted me and asked -- at the time, Mr. Hale was and is a citizen of Arkansas, and he was going to be -- he was a witness down in the Whitewater proceedings that were being conducted by the independent counsel in Arkansas.

In his May 9 follow-up letter to the committee, Olson changed his tune, claiming he wasn't sure who contacted him: "I cannot recall when I was first contacted about the possibility of representing Mr. Hale ... I believe that I was contacted by a person or persons whose identities I cannot presently recall sometime before then regarding whether I might be willing to represent Mr. Hale ..."

The facts: Salon's Murray Waas conducted an extensive investigation into how Olson came to represent Hale in 1998. A disgraced former Arkansas municipal judge and con man, David Hale testified at the trial of then-Gov. Jim Guy Tucker and Jim and Susan McDougal that Bill Clinton had pressured him to issue an illegal $300,000 loan to the McDougals -- a loan that became the center of the Whitewater investigation. Ultimately, his allegations were never substantiated. Waas' reporting showed that Hale gave "false and misleading" testimony to a federal jury "in an effort to conceal his relationship with conservative political activists who ran a secret anti-Clinton operation."

Among those activists was Olson, who was brought on board to quash a subpoena requiring Hale to testify before the Senate Whitewater Committee. During the April 1996 criminal trial of Tucker and the McDougals, Hale testified that he found Olson through Randy Coleman, who was his attorney at the time. However, sources with intimate knowledge of Hale's defense said Coleman played no role in securing Olson. In fact, according to the sources, Hale was directed to the Washington lawyer by Stephen Boynton and Dave Henderson, two "decades-long friends" who were running the Arkansas Project.

Had Hale revealed his relationship with Boynton and Henderson, it would almost certainly have revealed the existence of the secret Arkansas Project, including his own role in it.

The assertion that Hale was directed to Olson by Boynton and Henderson was corroborated by Caryn Mann, who was the live-in girlfriend of Parker Dozhier, a fishing resort proprietor in Hot Springs, Ark., who was working as the "eyes and ears" of the Arkansas Project and was, according to Spectator records, paid at least $48,000 by the magazine. Mann told Salon, "David needed a separate attorney in Washington, D.C.. Parker was talking a lot to Henderson and Boynton about the problem. Henderson said that he would look for an attorney for Hale ... Dave Henderson came up with a Ted Olson."

Mann and her son, Joshua Rand, also alleged that Dozhier made numerous cash payments to Hale while the former judge cooperated with the Starr investigation. Those embarrassing charges sparked an investigation of Starr's investigation by Michael Shaheen at the Justice Department -- and raised serious conflict of interest questions for Kenneth Starr, a longtime Olson friend who had been planning to become dean of the Scaife-endowed Pepperdine University School of Public Policy. (He subsequently withdrew himself from the job.) Shaheen's investigation remains under seal.