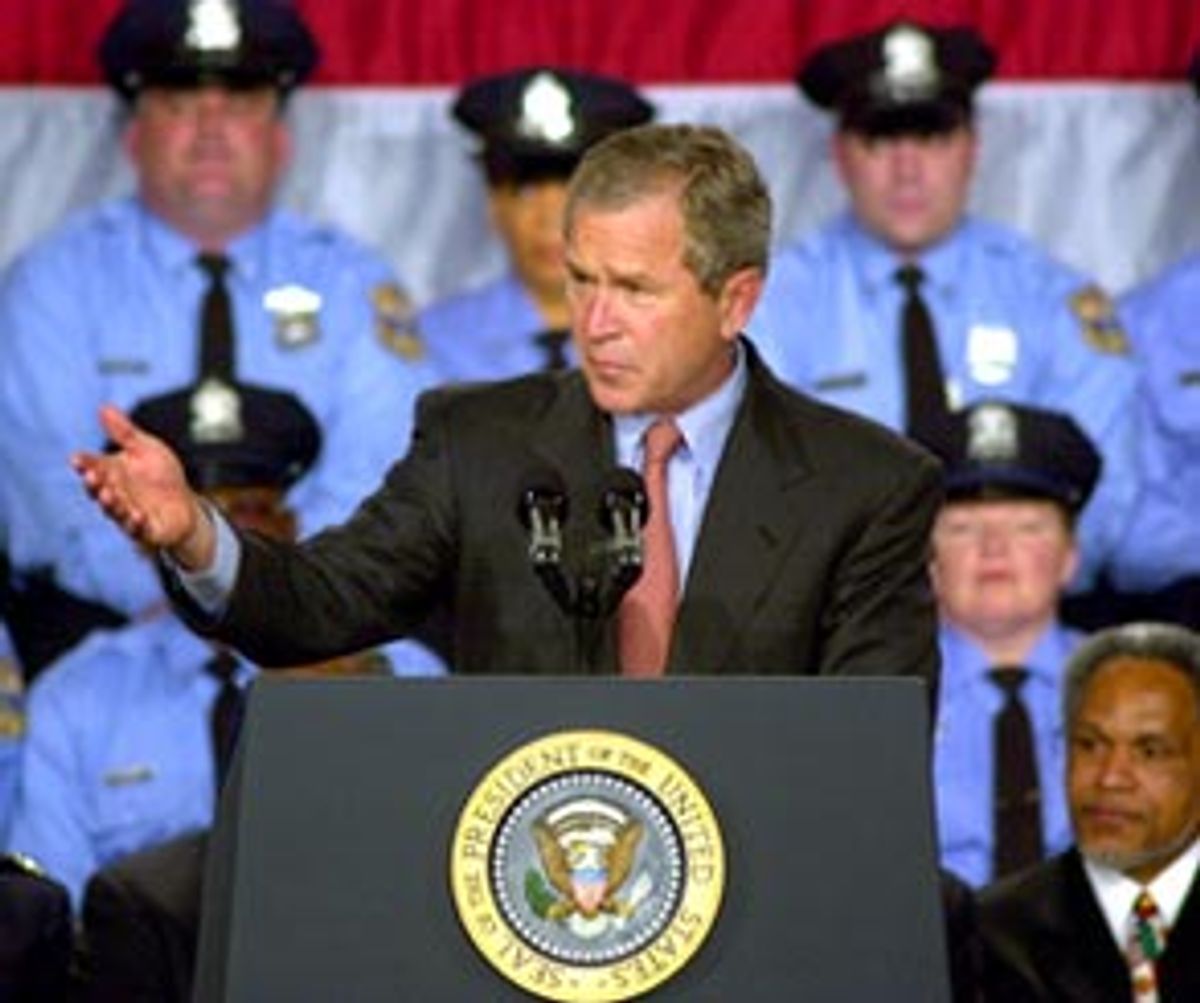 Monday morning, President George W. Bush flew into the city where he was officially crowned GOP nominee to announce "Operation Safe Neighborhoods," a new two-year, $550 million program to ramp up the prosecution of those who break gun laws.

The program was as uncontroversial as it is possible for a gun-related law-and-order measure to be, supported by both the National Rifle Association and gun control groups like Handgun Control Inc.

Philadelphia was an appropriate location for Bush's announcement because of historical precedent; in January 1999, then-Mayor Ed Rendell, a supporter of gun control, and Charlton Heston, president of the NRA, came together to launch Operation Cease Fire, a similar pro-prosecution program focused just on Philadelphia.

Some in the gun control community noted, however, that Bush -- ever the master of appearance, if not substance -- packaged the announcement as if he were introducing the Brady Bill.

"Gun violence is still a serious problem," Bush said, citing both national and local statistics to prove the case. "Three out of four murder victims in this city are shot to death with handguns. Among young victims, that figure rises to almost nine out of 10. In America today, a teenager is more likely to die from a gunshot than from all natural causes of death combined."

Nancy Hwa, associate communications director at Handgun Control Inc. -- the gun control lobby helmed by Ronald Reagan's former press secretary Jim Brady and his wife, Sarah -- said that by even talking about "gun violence" being "a serious problem," Bush was taking a step that few major Republican political figures ever do.

"After the latest round of school shootings, all [Attorney General John] Ashcroft talked about was violent video games," Hwa said. "They usually bend over backward to avoid mentioning guns at all." Parts of Bush's speech Monday, Hwa said, "sounded like language that we would use."

But Hwa said that Bush's remarks were probably more a manifestation of a change in spin than a change of heart. Handgun Control Inc. has never considered Bush to be a political ally, having criticized him for supporting a Texas law to allow licensees to carry loaded, concealed weapons, for supporting a special protection from liability lawsuits for the gun industry and for failing to require background checks for firearms purchasers at gun shows -- the infamous "gun show loophole."

Indeed, Monday's speech could easily have been delivered by a president of either party. In an auditorium at the Philadelphia Convention Center, Bush and Ashcroft stood in front of 35 cops being promoted to corporal while Bush's favorite Democratic mayor, John Street -- who sat with first lady Laura Bush during Bush's first speech to Congress -- gushed about Bush's "unusual sensitivity and unusual understanding of our challenges."

Right before noon, a folksy yet serene Bush strode to the podium and gave various shout-outs to Street, Ashcroft, the lieutenant governor, the state attorney general and two U.S. senators present. (Bush's good buddy, veep short-lister Gov. Tom Ridge, had an "excused absence" since he was off trying to "drum up some business for the state," Bush said.)

He then nodded to Keystone State Reps. Curt Weldon, Pat Toomey and Joe Hoeffel, all of whom were planning to fly back to D.C. with Bush on Air Force One. Bush said he was "looking forward to listening to what you need to tell me. I probably won't do it," he said to laughter, "but, nevertheless, I look forward to listening."

Bush -- who has yet to say or do anything that the leadership of the NRA would find objectionable -- then waxed Brady-esque. "Nationally, there were 12,658 murders in 1999, two-thirds of which were shooting deaths," Bush said. "And for every fatal shooting, there were roughly three nonfatal shootings. And, folks, this is unacceptable in America. It's just unacceptable. And we're going to do something about it."

Operation Safe Neighborhoods -- as explained to the crowd by Ashcroft in a histrionic, announcer-like voice, as if he were narrating Fox's "When Animals Attack" -- will hire 113 new assistant United States attorneys and 600 or so state and local prosecutors who will focus exclusively on gun crime prosecutions. Forty-four million dollars will be available for states to improve their record keeping to prevent criminals from illegally purchasing firearms, just over $60 million will be spent on preexisting federal programs to combat gun trafficking and prevent criminal gun activities, and an unspecified amount of money is to be dedicated toward "generat(ing) an effective deterrent message."

While Bush and Ashcroft devoted their time in Philly to discussing this program, which focuses on crimes after they've taken place, the gun control community was trying to talk about preventing criminals from getting guns in the first place.

Sarah Brady applauded the president's announcement as "a step in the right direction; however, we hope that this is just a first step. We need to prevent criminals from getting guns in the first place so that these crimes don't happen at all. The man who shot my husband, Jim, was prosecuted, but Jim will never walk again."

Additionally, Philly commuters on the Schuylkill Expressway and Tacony-Palmyra Bridge were treated Monday to $11,000 in radio ads from Americans for Gun Safety, in a one-day round of drive and midday ad purchases specially arranged for Bush's visit. The ads were focused on the group's main legislative priority, the Senate bill that will be offered Tuesday morning by two of Bush's nemeses -- Sens. John McCain, R-Ariz., and Joe Lieberman, D-Conn. -- that would close the gun show loophole.

In a statement, Brady noted that in announcing the details of Operation Safe Neighborhoods, Ashcroft railed off a list of law enforcement organizations - like the International Association of Chiefs of Police, or the Major City Chiefs -- that supported the program. Most of the organizations listed have supported various gun control legislation -- including the Brady Law and, most recently, "legislation to close the gun show loophole," Brady said. "We hope that President Bush will listen to them on this issue" as well.

White House spokesman Scott McClellan said that Bush and his team would have to examine the McCain-Lieberman bill before forming a position on the matter, but that in general Bush's position on the gun show loophole is: "Close it."

McClellan added that Monday's announcement was just the latest in Bush's "proven record in the state of Texas in strictly enforcing the laws on books" when it comes to guns. In December 1999, however, the Houston Chronicle reported that then-Gov. Bush supervised a state where authorities did nothing about more than 600 convicted felons who had illegally applied to the Department of Public Safety for licenses to carry firearms.

In October 2000, the Los Angeles Times reported that more than 400 Texans with criminal records -- including some who had done time for rape and armed robbery -- actually received these licenses.

Regardless, Bush on Monday demanded that "this nation must enforce the gun laws which exist on the books ... 'Domestic tranquility' is a phrase made famous in this city. Project Safe Neighborhoods is one step, and an important step, to making that a reality."