Remembering the king of zydeco

Whenever I had Boozoo on my ass I felt good. 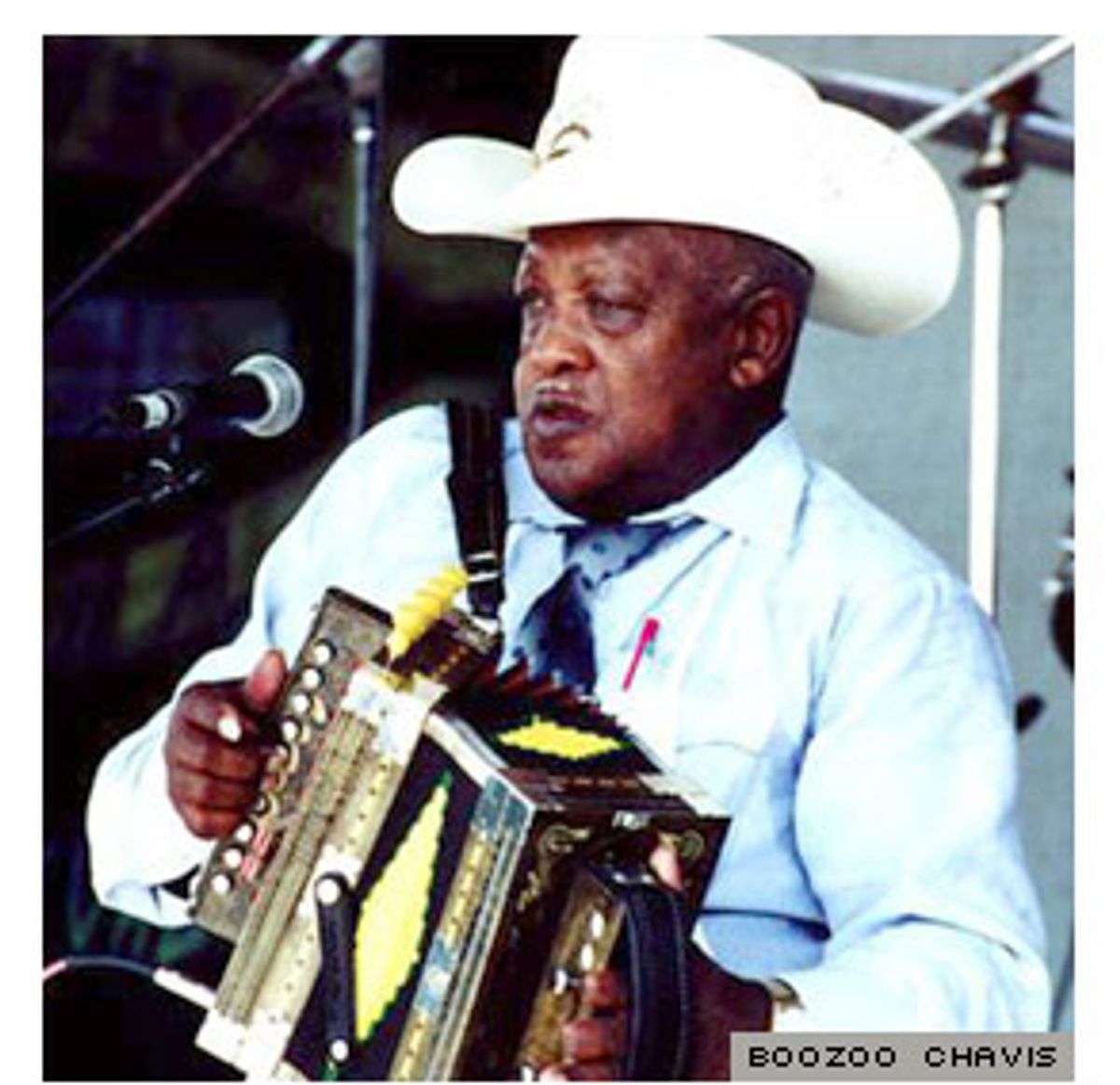 I got the news when I was wearing the panties. "Boozoo Chavis and his Majic Sounds" is in big letters above and below a silkscreen of Boozoo holding his accordion and wearing his ever-present apron. On the left buttock: "Take 'Em Off! Throw 'Em in the Corner!" On the right: "Let Me Play With Your Poodle!"

Boozoo signed them at Tramps about five years ago and gave me kiss. His wife, Leona, smiled her honey smile and said, "Don't you worry, sugar, I ain't jealous!"

Boozoo Chavis died last Saturday, and I am very sad. He collapsed after performing a show in Texas. Clifton Chenier has his fans, but Boozoo was the real King of Zydeco. I loved him. I feel guilty. I could have killed him.

I first saw Boozoo almost 10 years ago on my birthday. My friends Amy and Dave took me along with them to see him at the Lone Star Roadhouse in Midtown. Dave found one of Boozoo's old records and made me a tape; Dave had been in a country band, and he had a thing for semiobscure artists. Plus he just liked his name.

I fell in love with Boozoo and zydeco music while drinking iced tea mixed with some Smirnoff that we smuggled into the club. I loved his raw accordion, his cowboy hat, how he put on a clear plastic apron to protect the beautiful instrument with its mother of pearl inlay. I loved his bluesy, gravelly voice and sweet riffs. I didn't know how to two-step or waltz, but I danced. I felt a kinship to him -- the music was sad and happy at the same time. And he played crazy songs, some in a Creole French I had never heard before. They were raunchy. And funny. He said, "Yeah, you right" all the time. The way he played that accordion, Boozoo was sexy in some weird way, even if he was 60.

When the band took a break, Dave snuck up to Boozoo's son Charles and told him it was my birthday, and they surprised me by starting their second set with a zydeco "Happy Birthday":

I didn't get any that night, but I did get some new undies. Leona was there selling panties and aprons (Boozoo's trademark souvenirs!) and we went downstairs and shyly asked Boozoo to sign them with a marker. He wasn't shy about asking me to spell "Happy Birthday, Christen" for him. He asked Dave how to spell "Amy"; we thought that was funny. They were light blue with a red silkscreen on them.

My lucky underwear. Whenever I had Boozoo on my ass I felt good. Lucky underwear is for traveling or when I feel blue and need a little extra help to get through the day. I never threw that pair out, even after the elastic broke and the letters faded. They are still hiding in the back of my underwear drawer.

I got a few more pairs and an apron over the years, at Tramps and some club on Varick Street that he played once. The apron is signed too, and it hangs next to my kitchen sink.

He usually performed with his sons Rellis and Charles, but that first night at Tramps Boozoo told the crowd, "I had to send Rellis back to take care of the horses. One of my nephews plays drums too, so he's sitting in." They shared a few beers with us after that first show. We felt special that Boozoo's relations would hang out with us.

He usually did two shows a night; sometimes I'd go to the early one and stay for the late one. He played about once a year in New York, and though I stopped going out of my way to see rock bands, I'd always skim through the listings for his name. Sometimes I went by myself.

Boozoo always treated us as if we were long lost cousins, "Yeah, I remember you!" and inviting us to Dog Hill for the zydeco festival on his property every Labor Day. I wanted to go this year.

His music made me fall in love with him. You can't explain why music touches you.

His doctors warned him to slow down. "Don't Worry about Boozoo" goes like this,

I called Boozoo at home last summer. I was planning a big party and thought, Hey, you never know, if Boozoo's going to be in town, maybe he'd stay an extra day and play. So Dave supplied me with the number of his old record company, Maison de Soul, and the secretary there gave me a phone number from an old poster, saying, "I think it's his booking agent." When I called the number, Boozoo picked up the phone. My heart pounded and my mouth dried up as I explained who I was and what I wanted.

He claimed to remember me. (I probably was the only 20-ish blond swooning over him in New York, so maybe he actually did.) He said he only knew where he was going to be in the next few weeks, not months, that I should check with his manager.

Well, it never did work out, but I called Boozoo again, this winter, when my sexy boy and I were on vacation down South. We had gone down to Memphis in January for Elvis' birthday (I have a thing for kings) and we drove down to New Orleans and I called Boozoo at home on my cellphone (I pressed "save" -- his number is still there in my Sprint phone -- BOOZOO) to find if he'd be playing in Louisiana in the next week.

Turned out he wasn't playing; we missed him by a day. He sounded old. He sent us to the World Famous Mid City Lanes (Home of the Rock and Bowl) in New Orleans to see Nathan & the Zydeco Cha Chas. He'd be playing there the day we had to leave. He suggested Slim's Y-Ki-Ki, and Richard's and El Sid O's near Lafayette and Delphine's Double D near Breaux Bridge. I was hoping Boozoo would invite us to Dog Hill, but he didn't. It would have been a few extra hours' drive, but I didn't care.

So we drove into Cajun country and rode around for an hour trying to find Delphine's, which was an old clapboard house at the end of a lane. Nothing to tell it was a roadhouse except for some zydeco chugging from the jukebox. The main attraction for the patrons was the poker machine, but my sweetie and I tried a two-step in the corner, and the owner kept feeding quarters into the machine to play some new zydeco. There wasn't much live zydeco to be found in the back country during the week in the dead of winter. But did we ever have a good time with that jukebox and some Budweiser from the cooler. The fact that Boozoo sent us, and that we were fans of zydeco rather than Cajun music, made us many friends.

It's one of Boozoo's famous songs. He recorded "Paper in My Shoe" in 1954, one of the first zydeco songs ever recorded. We picked up a few new Boozoo CDs on our trip: "The Lake Charles Atomic Bomb", "Live at the Habibi Temple in Lake Charles, Louisiana" and the Rock and Bowl's "Kingdom of Zydeco". And that song is on all three of our new CDs. I love it. I've been listening to it nonstop for the past four days. (Go buy these -- also "Boozoo's Zydeco Hee-Haw" and "Zydeco Trailride.")

Boozoo played at Lincoln Center Out of Doors in the summer of 1999. Amy and Dave and I were there, on our way to the deli to pick up a 12-pack instead of drinking the $6 draft for sale, when we saw Boozoo walking down the street toward us. Dave shouted "Boozoo Chavis!!!" and Boozoo was surprised and proud and a little freaked out: "Somebody knows me!" I'll never forget that sight, Boozoo striding down a Manhattan avenue, decked out in cowboy boots, a Stetson and a striped shirt.

That show seemed to be a big deal for Boozoo. Lincoln Center, a bastion of culture. (Maybe I just imagined that it was, maybe Boozoo didn't give a shit about Lincoln Center. He was a proud man, though.) And a big deal because he had to play all night, every song in both sets. Usually, I had seen him let his sons get the crowd worked up and cooled down, and sometimes he took a break in the middle. But apparently the Lincoln Center promoters wanted none of that. Leona was friendly, apologizing for not having any panties this time. She seemed a little bewildered at being in a roped-off tent next to the stage. I called out songs I wanted to hear, energetic numbers like "I Want to Play With Your Poodle" and his song about his neighborhood in Lake Charles, "Dog Hill." He complained to me from the stage, "Honey, that's one fast song after another!" But he played all my requests. And he was great.

But Boozoo was old, and I felt guilty for making him play all those songs. His white western shirt with blue stripes was wet through. What if he had collapsed then?

I wonder if there was someone in Texas that night, calling out one fast song after another.

Dave called me Monday, tentatively asking, "Did you see the paper?" Yes, I told him, I was reading the Times on the Amtrak from Boston. I was wearing my Boozoo panties when I saw the obit. Yeah, you right. I'll see you on Dog Hill, Boozoo, where all the pretty women at.

Christen Clifford is a writer and actor in New York.