Showtime for the NBA

With four likely Hall of Famers on the floor, the Lakers-Spurs series ought to be one for the ages. But the outcome may turn on a much more prosaic performer. 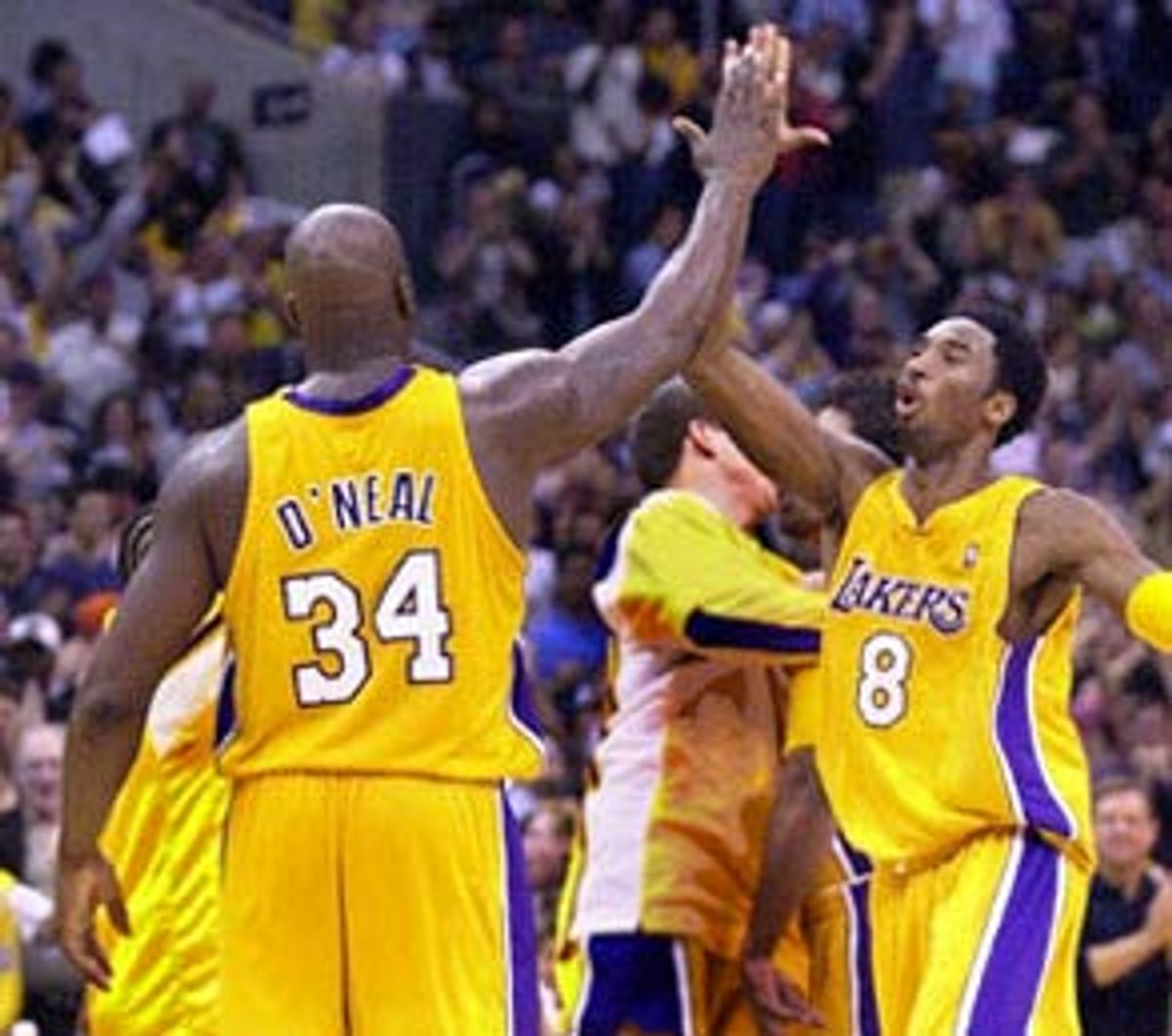 The 2000-01 playoffs may be precisely the boost the flagging NBA needs to reclaim a chunk of the big time. I haven't seen the ratings yet, but people I know who haven't followed basketball all season are now fired by the prospect of one-on-one battles, namely Allen Iverson vs. Vince Carter in the Philadelphia-Toronto series and Shaquille O'Neal vs. Tim Duncan in the Lakers-Spurs matchup.

If the mass audience isn't back for these series then it should be; if this isn't what you've been waiting for on a basketball court, what is? It's almost as if the NBA isn't having a playoff but a tournament, like boxing is having, to decide the champion once and for all. The player whose team comes out on top will likely be granted the unofficial title of Greatest Player in the Game, which has gone unclaimed since Michael Jordan's retirement. Or, maybe Shaq and Kobe Bryant will be hotly disputing the title, a prospect that doesn't diminish the title but doubles it.

I can tell you now that it isn't going to be Iverson or Carter, who really aren't that great but who look enough like they are to make the debate intriguing. The winner of the West, of course, will be the winner of the league for this season, and since we're not going to bet Boston Celtics- or even Chicago Bulls-type dynasties anymore, the first team to win its second championship in two or three tries will be acclaimed as the new dynasty.

It's a shame, then, that the outcome is likely to be settled not so much by Hall of Fame quality players like Tim Duncan and David Robinson of the Spurs or Shaq and Kobe of the Lakers but by ... Antonio Daniels? Probably. A week ago Dallas' Juwan Howard may have settled the playoff issue once and for all by flying into San Antonio's Derek Anderson while the latter was attempting a fast break; Howard separated Anderson's shoulder as cleanly as if Ronnie Lott had come out of retirement and nailed Anderson going for a high pass. The TV commentators didn't have the guts to call it what it was -- an incredibly cheap shot -- and the NBA didn't even have the guts to threaten to punish a cheap shotter the way the NHL is always threatening to do. The league simply ignored it. Well, let's hope it's as easy to ignore what it might mean to the postseason.

What it means is that pro basketball's best team -- and that's what the San Antonio Spurs are, at least with Derek Anderson in the lineup -- are left with no proven player to guard Kobe Bryant in what amounts to the season's championship series. Anderson is not a superstar, but he plays well enough to stifle one, and, indeed, that is exactly what the Spurs acquired him to do. Not to shut down Bryant, which may be impossible, but to sort of suppress him while the Twin Towers gang up on the Sears Tower. Now they'll be facing a team as good as they are -- and without Anderson the two teams are a dead-on match with absolutely no statistical edge for either side apparent -- without their best perimeter player.

How much pressure is on Antonio Daniels? Well, you may recall that over the winter an assistant coach actually begged off the assignment of working with him one-on-one. Now he must guard one of the three or four best outside players in the game in the biggest series of his life. On the other hand, when he failed to crack the starting lineup in January it was as a point guard. Daniels, to his credit, didn't whine; he merely hinted that he was playing out of position. He did well in a clutch situation against Dallas after Anderson was cheap-shot; but Dallas does not have a Kobe Bryant.

And, then, perhaps the pressure is not on Antonio Daniels after all. If he can't contain Bryant, no one will remember that he failed, only that Bryant succeeded and that is how it should be. There will be four superstars on the floor when the Spurs and Lakers take off, four men who almost certainly will be in the Hall of Fame, and one or two of them will dominate, and right now it cannot be said with any certainty who those one or two will be. The Lakers have a Mr. Inside and a Mr. Outside; the Spurs have two Mr. Insides who can also play outside. The last time there were four players this great on the floor in a playoff series was ... I don't know, the Bulls and Jazz, maybe, but I don't think Malone and Stockton match up with either the Lakers' or Spurs' stars. The Bulls and Lakers, maybe? Naw, Lakers were too old. I think it's the Lakers of Magic and Kareem vs. the Moses Malone-Dr. J Sixers in '82-83.

I was on the verge of picking the Lakers, but I've talked myself back into the Spurs. I think Tim Duncan has it in him to be the greatest player of all time and this is where he ups his bid.

Speaking of boxing elimination tournaments, I thought Felix Trinidad was sensational on Saturday against a very good middleweight champ, and I think Trinidad may be on the verge of being the best fighter in the world. Here's my post-fight conversation with boxing publisher, writer and raconteur Bert Sugar:

Let us say instead that he put a down payment on greatness. This is just one fight as a middleweight.

Some are saying that the other middleweight champ, Bernard Hopkins, will do better against Trinidad because of his superior height and reach. In other words, Hopkins will not only be a naturally bigger man but will have the height and reach to make that important.

That sounds reasonable, but great fighters have a way of making the reasonable sound ridiculous. I'm through underestimating Felix Trinidad; he is a great fighter. Hopkins is good but not great, and the great fighter should find a way to win.

What do you think will come of this Don King stunt of having Evander Holyfield fight John Ruiz for a third time in China?

I think an hour after it's over the audience will be hungry for a real fight. I think Evander Holyfield will shrug and say, "Thank God there are a billion Chinese who don't give a damn."