As Bush unveils his industry-friendly energy plan, even members of his own party are starting to sweat. 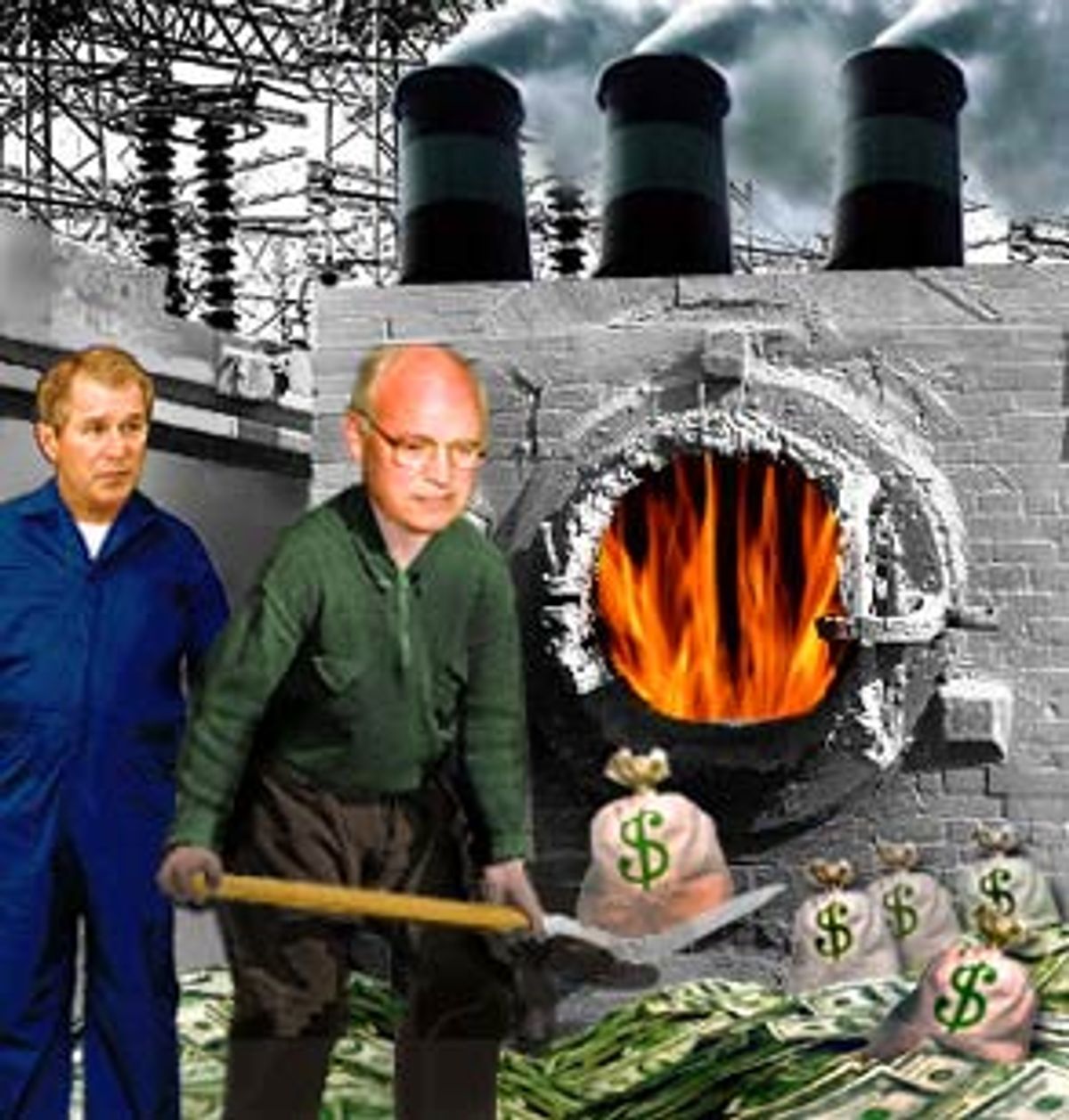 If the standoff on China's Hainan Island was the Bush administration's first international crisis, its first domestic crisis is largely self-created. Despite Bush's rhetoric, it's not an energy crisis -- experts disagree on whether, outside of California, we're really facing one -- but a crisis of public confidence. Polls show President Bush has succeeded in convincing Americans that the nation's energy woes are serious, but they worry the administration can't solve the problem given its extensive ties to the energy industry.

And the energy plan Bush will release Thursday, crafted in near secrecy by a task force dominated by power-industry execs, with no environmentalists or consumer advocates, is likely to worsen that political crisis. Staking out his political ground, Bush said the nation is facing "the most serious energy shortage since the oil embargo of the 1970s," which "if allowed to continue, will inevitably undermine our economy, our standard of living and our national security."

Predictably, Democrats have begun hammering Bush hard on the energy issue, attempting to exploit public worries about his close ties to the industry. But even members of Bush's own party have come out in strong opposition to key planks of the plan being hawked by Vice President Cheney, head of the White House energy task force. California Republicans are angry the plan does little to solve the state's energy woes, while other Western conservatives are furious about reports that Bush will expand eminent domain laws -- anathema to the property-rights crowd -- in order to build more energy facilities.

Though Bush will not formally unveil the plan's details until Thursday, when he embarks on a two-day tour to try to sell it, the key components have been known for weeks. The plan calls for hundreds of new power plants, as well as renewed exploration for oil and gas and increased oil drilling, including new drilling in the Arctic National Wildlife Refuge. The plan also calls for the "safe expansion" of nuclear power, as well as billions of dollars in tax credits for people who purchase energy-efficient cars or use alternative energy sources, such as solar power, at home. As expected, the plan stops short of asking autombile makers to raise fuel efficiency standards on new cars and trucks.

But the plan is also notable for what is not in it. Once again, the administration has rebuffed calls from Californians -- including many congressional Republicans -- to put price caps on wholesale energy prices in the West, where the price of energy has increased more than tenfold since last summer.

Instead, Bush's surprising answer to California's energy crisis, as well as rising prices at gas pumps around the nation, has been to hawk his massive tax cut. Consider this zany exchange from his press conference last Friday. A reporter asked, "What would you say to American families who may pay as much as $3 at the pump this summer at the same time that oil companies in this country are experiencing and enjoying record profits?"

To which Bush replied: "What I say is, I worry about the fact that hardworking people are paying high prices at the pump. It concerns me a lot. And therefore, the Congress needs to cut taxes as quickly as possible to give people money to be able to deal with this situation."

Of course, passing a $1.3 trillion tax cut in order to let Americans give more money to energy companies may seem a strange form of public policy. Once it's in the hands of the oil and energy companies, some of that tax cut will eventually end up in politicians' pockets -- to the tune of $64.6 million last cycle, according to records collected by the Center for Responsive Politics. (Seventy-five percent of that energy industry money went to Republicans last election cycle, with $2.85 million going to Bush, the industry's largest recipient.)

"Essentially, he's saying the government is a giant money laundering machine that gives back your taxes so you can give it to the oil companies or electric companies," says Rep. Robert Filner, D-Calif. "Why not just give it directly to them? What he's really saying is there is no tax cut, they're just giving the money to his friends in the energy industry."

But it's not just Democrats who are critical of Bush's plan. Rep. Duncan Hunter, R-Calif., is sponsoring legislation calling on the federal government to impose an immediate cap on wholesale power rates. Other California conservatives, including Rep. Elton Gallegly, have signed on to the measure in a clear break with the White House.

And other Western conservatives are outraged by the energy task force's move to expand eminent domain powers to build power facilities. Eminent domain is an issue near and dear to power companies, as it gives them a way to fast-track production of new plants and power lines. In an interview with CNN's John King last week, Cheney said the Federal Energy Regulatory Commission should be given the power to seize private property in order to install new power transmission lines.

Western governors like Idaho's Republican Dirk Kempthorne have also expressed skepticism about the eminent domain proposal. "One of the things that you can well imagine that states believe in is states' rights and sovereignty," Kempthorne said at a meeting of the Western Governors Association last week. "If it's on federal lands -- where we're talking about the [Bureau of Land Management] or the Forest Service that has jurisdiction -- again, that's something that we would explore further. But not crossing over to where it gets into state domain and state sovereignty."

Democrats say the push is evidence that the administration values its friends in the energy industry over individual property owners. "This is incredible, for a property rights guy to talk about taking eminent domain to get transmission lines built to override environmental or local concerns," Rep. Filner said. "He's just saying, 'To hell with the environment, you guys just build what you want to build.' It's incredibly ironic that an administration that says they're protecting private property wants to do this."

The White House responded to the attacks from Filner and other Democrats who have blasted the administration plan as being a giveaway to energy interests, quickly going to the "politics of personal destruction" card.

"This is one of the reasons that we haven't had an energy plan in the past, is because we get bogged down in these kinds of personal attacks," said White House spokesman Jimmy Orr. "The president's approach is not to demonize the opposition and question motives. The president understands that this is a real problem and is going to take work on both sides of the aisle to come up with solutions."

Clearly, the spin from the White House is that Democrats are playing politics with the energy issue, Bush's efforts to "change the tone" notwithstanding. And it would be wrong to underestimate the White House politically. Bush has succeeded on one front: convincing Americans that the nation is indeed in an energy crisis. A new Gallup poll set to be released Thursday shows 21 percent of those polled named energy as a top concern, placing it only behind the economy on America's issue list. That number is up from 3 percent in March, according to Frank Newport, editor in chief of the Gallup Poll.

But that could be good news for Bush politically, Newport said. "There used to be a saying in the military that you want a crisis because it's your ability to handle it that brings you a promotion," he said. "The greatest American presidents had wars. I would say a crisis creates crisis and problems for politicians but also opportunity."

That seems particularly true of Bush. Throughout his brief political career, Bush has embraced any opportunity to beat expectations, and welcomed any chance to change public perception. In many ways, Bush is at his best when he is underestimated by his political opponents. He came from nowhere to beat incumbent Ann Richards in his 1994 run for Texas governor; during the presidential campaign, he seemed happiest as a self-described underdog after his crushing defeat in the New Hampshire primary. So this may be just the kind of problem Bush enjoys.

Filner, of course, has another interpretation. "They're so arrogant and this plan just shows they feel they have all the power that they can say anything they want. That's just an insult."

Certainly, getting the plan through Congress is going to take one hell of a sales pitch. And that pitch begins Thursday as the president hits the road in support of his plan. His two-day tour will take him to Iowa, Minnesota and Pennsylvania. "This gives the president a chance to travel outside the Beltway, to discuss his plan and his agenda, much like he did with the tax cut," Orr said. "He's looking forward to communicating his message to the American people."

Now Democrats are calling that approach "money laundering," to use Filner's lively language, and calling for the federal government to step in and stop what they say is the gouging of consumers by energy and oil companies. The Democrats' plan would take money out of the industry's pockets. Now which one sounds like the easier sell?

Bush and Cheney also stumbled, badly, by bad-mouthing conservation efforts as a response to energy problems. First Cheney dismissed conservation as a sign of "personal virtue," and then Bush spokesman Ari Fleischer suggested it threatened the "American way of life."

But despite Bush's campaign rhetoric about ignoring pollsters, Newport says the White House has clearly changed talking points in the wake of polling numbers about conservation. "Clearly, the public wants an emphasis on conservation," Newport says. "When the initial Bush plan came out with an emphasis on production, the public was opposed to it. Since then, Bush and Cheney have started mentioning the C word a lot."

Indeed, when discussing the outlines of the plan Wednesday, the White House pointed out that of 105 specific recommendations that the task force will make, 42 of them will deal with conservation and environmental protection -- an utterly meaningless statistic, since no specifics on those 42 recommendations were made public, but indicative of the administration's new pro-conservation spin.

The eminent domain proposal may pose some of the biggest problems for the administration. Giving utilities and power companies the right to seize private property will not sit well with Bush's base in many conservative Western states.

Eminent domain laws have long been used by environmental groups to set aside acres of Western lands for environmental protection, raising the ire of property rights advocates. "The great problem in the West is the utter insensitivity of the Interior and Agriculture Department bureaucrats to private property owners and communities throughout the West," said Roger Pilon, vice president of legal affairs for the Cato Institute. "The eminent domain power is a Draconian power. Therefore it is meant to be used sparingly. There is a great danger in this power being wielded arbitrarily. Just because it's constitutional doesn't mean it's good politics."

But late Wednesday, Bush was practicing salesmanship with a smile. "I can't wait for the American people to hear the proposals," he told reporters. "It talks about the ingenuity of America. Ours is a great nation. Ours is a nation that can lead the world in innovative conservation measures. And we provide incentives to do that. Ours is a nation that can explore in technologically friendly ways, and we will show the world how to do so."