Computer animation is a technological miracle. So why does it leave us cold? 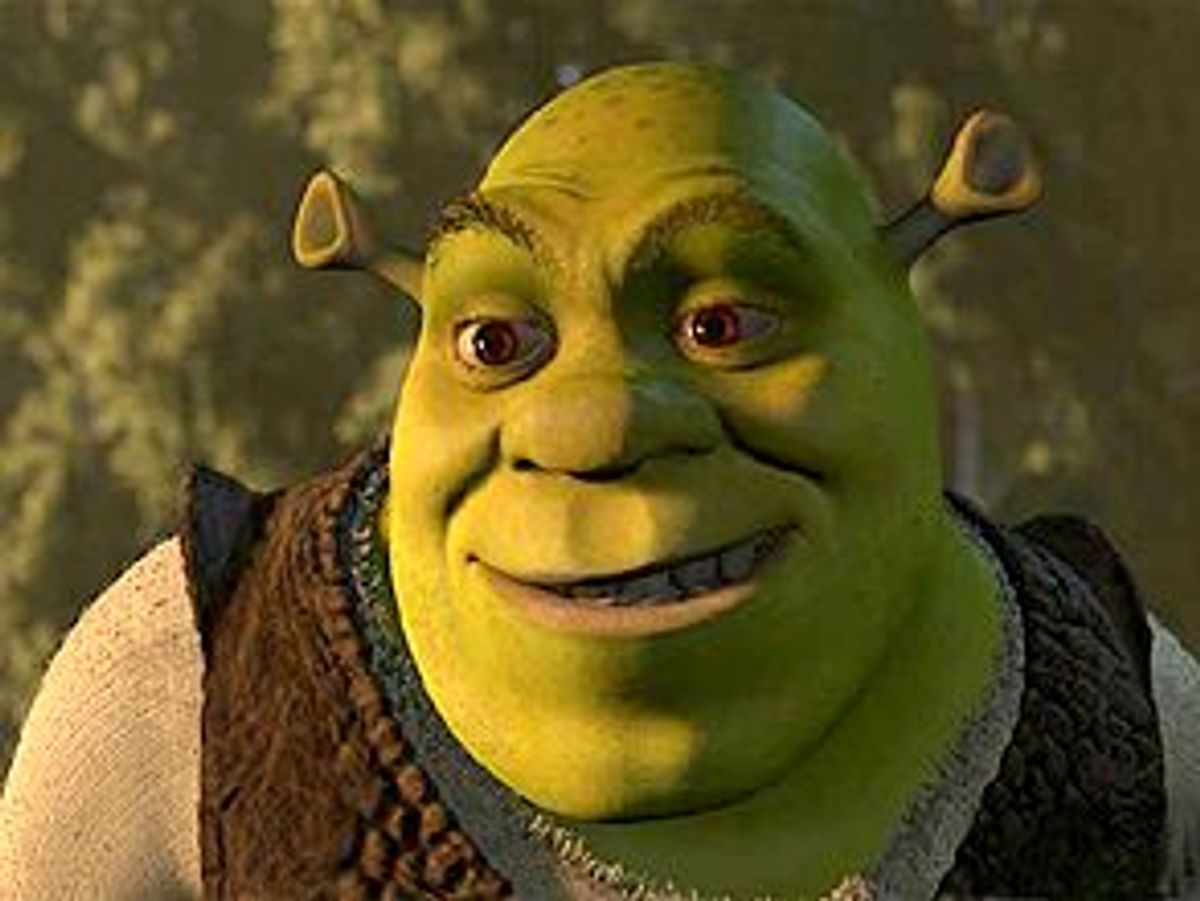 Am I alone in thinking that computer animation is the work of the antichrist? I'm ready for the deluge of letters from earnest fans trying to convince me that it's a thrilling new medium that's changing by the day, one that's cooler, more versatile and more realistic than conventional 2-D animation. Those arguments will probably be technically sound. But they won't explain why movies like "Shrek" leave me feeling flatter than an old-fashioned animation cel.

I could understand it if computer animation had been specifically designed to desensitize the human race to thought and feeling; instead, it's supposed to give us pleasure. "Shrek," based on a well-loved children's book by William Steig, has plenty going for it: The story of a fat, cranky, green ogre with no social skills, it has a rough-and-tumble jauntiness that's often hard to resist. It's good-natured with just enough wiseass crackle about it (and not in the glossified, milk-safe Disney way). The ogre Shrek (Mike Myers) lives alone, quite happily, in his own private swamp, until his solitude is shattered by a noisy, restless troupe of fairy-tale and nursery-rhyme characters who've been forced from their homes by the nasty Lord Farquaad (John Lithgow), who, with his Prince Valiant haircut and long, squared-off jaw, resembles nothing so much as a cartoon-world version of Laurence Olivier's Richard III.

After begrudgingly accepting the friendship of one of the refugees, the eminently polite but straight-talking Donkey (Eddie Murphy), Shrek travels to Farquaad's kingdom to see what he can do about repatriating the fairy-tale squatters. Farquaad agrees to help if Shrek will travel to a far-off kingdom to rescue Fiona (Cameron Diaz), the princess Farquaad has decided to take for his bride. (He chose her from a "Dating Game"-style lineup, complete with that show's music and pop-art daisy motifs, presented to him via a magic mirror.)

There's clearly an intelligent, intuitive sensibility behind Shrek: In a pivotal scene, when Shrek and his true love are separated, their feelings of despair and isolation are played out against John Cale's version of Leonard Cohen's crestfallen anthem "Hallelujah." It's both surprisingly offbeat and touching. Beyond that, the screenwriters of "Shrek," Ted Elliott, Terry Rossio, Joe Stillman and Roger S.H. Schulman, revel in joyous, kid-friendly perversity, giving us stock fairy-tale and nursery-rhyme characters who behave in ways we'd never expect. It's impossible not to laugh as the Gingerbread Man, two of his little baked legs cruelly broken off at the knee, scowls like a hard-boiled gangster at Farquaad, who's captured him in the hopes of gleaning information about the renegade storybook characters.

Details like that are inventive and fun, but they're not nearly enough to melt the candy-hard veneer that coats "Shrek." The picture presents itself as a naughty court jester ready to thumb its nose gleefully at just about anything: There are gross earwax jokes, as well as gentle little pokes at every bit of fairy-tale movie lore from "Babe" to "Crouching Tiger, Hidden Dragon."

But "Shrek" rides high on its state-of-the-art technique, to the point where its showy self-satisfaction throws us out of the story instead of fully engaging us with the characters. We're invited to marvel at the fact that we can practically count the bristly brown hairs on Donkey's back -- but what the heck are we doing, thinking about counting hairs? The techno-sophistication of "Shrek" cuts right through the picture's goofy, pleasingly homespun demeanor like a laser, resulting in something that smells a lot like disingenuousness; we're left feeling self-righteously hip and knowing, and worse yet, we've almost been convinced that's a suitable substitute for enchantment.

Maybe enchantment doesn't come cheap. But is it that much more expensive than extravagant smugness? According to the press materials, "Shrek" avails itself of a DreamWorks "proprietary" facial animation system (first used in "Antz") that uses a layering process to build the image of a character's face, starting with the skull and then gradually adding computer re-creations of muscles and skin. The image is wired with hundreds of controls to allow for an almost limitless number of facial expressions, not to mention realistic lip-syncing.

There's no getting around that the characters in "Shrek" sure look real, in a 3-D model kind of way. (They resemble moving versions of those old View Master storybook reels featuring movable puppets, with the significant difference that you don't get a headache from looking at them for too long.) The characters move naturally, and their expressions make them look almost like live actors -- even if you've never particularly wanted your cartoons to look like a hyperreal version of reality, you've got it now.

But no matter how realistically these characters move or blink or smile, there's always a coldness about them, particularly around the eyes, that makes them a little spooky. Fiona even has two little frecklelike beauty spots, one on her cheek and one on her upper chest. They're symbols of her human authenticity, but they also serve as a sort of factory trademark left by her creators: "You see, we've thought of every last detail."

The hyperrealism of computer animation begs another question: If your goal is to make things look as realistic as possible, why bother with animation at all? One of the great pleasures of animation is the way it distills movement and color and sound into their simplest outlines; at its best, it gives us as much information as we need and no more. Our minds are left free to connect the dots, to fill in the minute spaces between the lines.

"Shrek," on the other hand, gives us too much. And yet with so many tools at their disposal, and with so much skill at their command, the animators of "Shrek" haven't graced us with anything particularly memorable. Walt Disney with his early shorts of singing and dancing bunnies or skeletons; Tim Burton with his Jack Skellington and Sally in "The Nightmare Before Christmas"; Nick Park with his man-and-dog team in "Wallace and Gromit" and his prisoner-fowl in "Chicken Run"; Chuck Jones with just about anything -- there's a long and varied list of individuals who have imbued cartoon characters with bottomless expressiveness without the help of anything as sophisticated as DreamWorks' Express-o-matic (or whatever it's called). Why do we need it now?

There are certainly plenty of creative uses for computer technology in animation: Trey Parker and Matt Stone's "South Park" characters may look crudely animated, but the jumble of construction-paper textures that make up the images is actually computer generated. And Brad Bird's "The Iron Giant" effectively uses a mix of computer animation and traditional, 2-D animation.

"The Iron Giant" is a story about a friendship between a (2-D) boy and a (computer-animated) robot. We identify most readily, of course, with the boy -- 2-D implies warmth and roundness so strongly that we believe in them wholeheartedly. The robot, on the other hand, is cold and mysterious at first, but that's just because it takes a while for us to get to know him. "The Iron Giant" is a sweet story by itself, but it's also something of a parable about the risks of fearing technology without trying to understand it.

And technology, of course, is the thing that makes a picture like "Shrek" possible. I don't underestimate the amount of care and work that goes into any animated feature, computer generated or otherwise. But "Shrek" is a switch-flipper of a movie: It repeatedly tries to toggle that little lever in all of us that generates a glow of awe and appreciation.

Mechanically, at least, the approach works. I know how hard the animators worked on "Shrek"; I saw it in every frame, and in every subtly shaded donkey hair. But I left the characters behind in the movie theater, like discarded and suddenly lifeless puppets, instead of dancing all the way home with them. I didn't have any desire to whisk them away with me. They look too much like work, and not enough like magic.