The author of "Running After Antelope" is determined to win a footrace against the second fastest animal on earth. 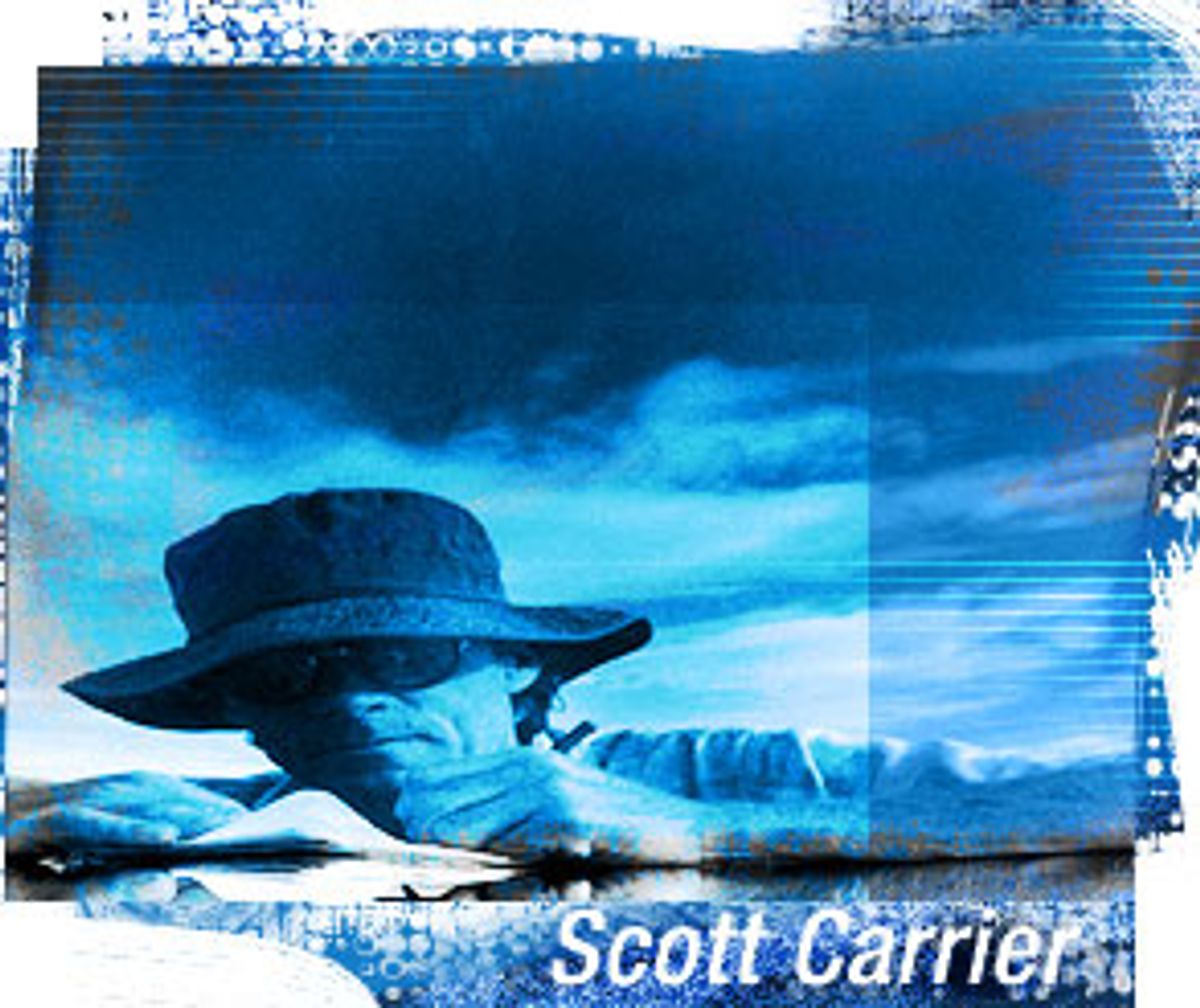 Forget the treadmill. Scott Carrier prefers to run across the Utah plains, in pursuit of pronghorn antelopes. Under a relentless sun, Carrier, his brother and his friends fan out in formation across the scrubland, carefully select an antelope and start running. Except for a cheetah, nothing runs faster than a pronghorn antelope, he tells us, and there aren't too many cheetahs in Utah. They run. Ten minutes pass, the gap between the antelope and the runners widens, then half an hour, the sun gets hotter, the gap wider, the antelope gets away. Always.

Forming the framework of his first collection of nonfiction, "Running After Antelope," Carrier's attempts to catch antelopes appear throughout the book, interspersed with other articles previously published in Harper's and Esquire. Also included are several broadcast pieces from his 18-year stint as a contributor to National Public Radio's "All Things Considered" and Public Radio International's "This American Life."

But Carrier's pursuit of antelopes provides the narrative thread of the book, and the essays that deal with it are the most captivating, honest and heartfelt. Early on, Carrier shares with us the origin of his obsession: Back in 1983, his vertebrate morphologist brother tells him that, during exercise, humans can breathe when they want to, unlike other mammals whose lungs are connected to their spines and are inflated automatically with each stride.

Carrier's brother believes this biological feature gives humans an advantage over other mammals by providing greater strength and stamina; he finds historical accounts of tribes that run for days tracking deer, antelopes or kangaroos until the animals tire sufficiently to be caught and killed. The tribes include the Goshutes and the Papago of America's West, Australian Aborigines, Mexico's Tarahumara and, also from Mexico, the Seri tribe, which Carrier visits. Slowly, over the years, he becomes transfixed with the thought of running down an antelope.

"When I drive across the desert I look for pronghorn standing by the highway. One time, on I-80 in Wyoming, I saw three of them outrun a freight train," he writes. Together, Carrier and his brother enlist anyone willing to put their theory to the test; patience, perseverance and a good pair of lungs are the only requirements.

Carrier has been writing for Esquire since the late 1990s, from various far-flung locations referred to simply as "really fucked-up places." These and other pieces see him traveling to Cambodia before and after the fall of the Khmer Rouge; to war-torn Kashmir, shelled from either side daily by Pakistan and India; and from Salt Lake City to New York and back again, hitchhiking, in two days.

What do you think readers have connected to in "Running After Antelope"?

The idea of pursuit, the idea of a chase; it's biological.

Have you managed to catch an antelope yet?

Not yet. I haven't tried lately. It would take some serious effort of more than just two guys. I'd say if we had four, and spent a couple of months working at it, maybe not every day, but it's been done. I believe in it. I think it's possible. The main problem is not the running; the main problem is knowledge of the terrain and the animal itself.

Primitive hunters did it. I mean, we got a pretty good story with the Seri down there in Mexico, and so many other reports. They're all so similar in the technique that it makes me think that it has been done. And I think also probably a certain amount of dancing has put the animal into some sort of trance. That's usually part of it, from what I've read, and the Seri said that too, that they would mesmerize the animal with a dance. I don't know how many groups actually were runners or ran things down and did stuff like that, because there's only three or four good stories in the records.

You included some historical accounts of this hunting technique in "Running After Antelope." How did you find them?

My brother found some of them when he was doing research and then I found a couple more just by looking through the ethnographies. There are some Indians in Canada who would go after deer in the snow, with snowshoes, but that's different. In deep snow the animal can't go anywhere.

Why are there so few surviving accounts of these hunting techniques?

You know, I think it's something that anthropologists missed. When there were primitive cultures intact, they didn't really ever go out hunting with the guys. They sat in camp and waited for them to come back.

The pieces collected in your book are all written in the first person. As a writer, how important to you is life experience?

I don't know about other writers, but for me, I just write about the things that I personally see or experience. So that limits me. Other people don't work that way and that's fine, but I try to write what I see and what I experience and always from that position. I try to make it clear from the beginning that this is my point of view.

Who are your literary influences?

Charles Bowden is probably the biggest one, recently. Over the years I've had a bunch.

Like you, Bowden is an American nonfiction writer. Do you read nonfiction exclusively or are you influenced also by works of fiction?

I don't read a lot of fiction because I like nonfiction better. I read some fiction -- well, Kerouac was a big influence. Yeah, Kerouac, Kurt Vonnegut as well, and Mark Twain. I kind of get into disagreements with other people in that I'm not really influenced by anything other than American writers.

When the book was published earlier this year, many reviewers commented on how American your writing is, and how your voice quintessentially reflects your nationality. Do you agree?

Yes, I think it's there because I try to write from my perspective. If I'm doing it well then it should sound like I come from a suburb of Salt Lake City in the year 2000, or whatever. So if that's working then I guess that's good.

You've been to some pretty dangerous locations. You traveled to Cambodia, which was controlled by the Khmer Rouge, and Kashmir, which has been the subject of protracted, and sometimes violent, ownership battles since the 1950s. Were you ever in any real danger?

I was in areas where people were being killed, or had been killed recently, or there was some threat of military action. But I was never worried for myself because most of the time, in situations like that, even really dangerous situations, they don't kill foreign correspondents. They kill the local correspondents who help them. Foreign correspondents go in and seek help from local people and the local people are the ones who get hurt, or imprisoned, or screwed up, because it's too big a deal to mess with the [foreign] correspondents and really they don't care one way or another most of the time.

How do you successfully introduce the reader to a country so removed from his or her own?

Those assignments are for short periods of time, like two weeks, and they're limited in length, so you've got to present the historical background, for educational purposes and to set the scene. Then I tried to basically say what it was like to be there and what I saw. That was the hardest part, because in two weeks, you know, to present a historical context and then to have something happen for a story form, it's rather chancy. And you don't know if anything's going to happen or not.

I just tried to do the best job I could, and I try not to write in a sort of macho blood-and-guts style like some of the other magazines. It was something that several men's magazines were doing, and still do, to publish reports from really screwed-up places. It bothered me that, like I say in the book, or like the character in the Chiapas story says, "they're putting blood and guts between ads for $3,000 suits and cologne." That bothered me, but at the same time I thought, Well, people can learn something from this about really screwed-up places that we don't know anything about.

How much input did you have in the locations you covered?

In bringing to our attention the plight of citizens in areas like Cambodia, Kashmir and Chiapas, do you think your reports have the power to effect any positive social change that will be felt by the subjects you interviewed while you were there?

Well, I don't know. I think that those Cambodia stories actually did have, sort of, an effect on the media awareness of Cambodia because I went there right before the Khmer Rouge dissolved, or fell apart. And then I went back again right after and that was a time when the Cambodians were trying to promote tourism and there was news going on besides. It was becoming a popular place for tourists and there were things happening that were pretty big changes in the country. It was something that Americans hadn't really known about; you know, we'd forgotten about Cambodia in that interim time. So I think that one did make a difference because a lot of people heard the radio story. I tried to write it in a way that it wasn't just a blatant, bloody thing. I was trying to affect the reader on a deeper level. I don't think the Kashmir one made any difference. Nothing's going to make a difference in Kashmir. The Chiapas one never got published, so it didn't make any difference at all.